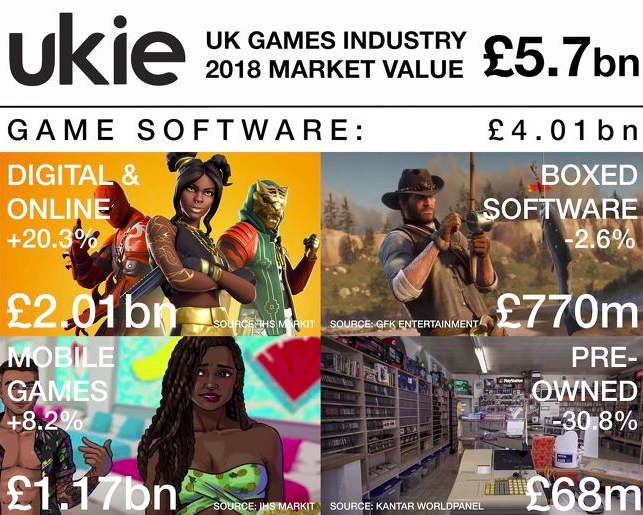 The valuation also included an analysis of consumer spend on wider game-related culture like T-shirt merchandise, which generated an additional £109.6m.

In the software market, data from IHS Markit showed a significant increase in digital downloads and online revenues, up +20.3% to a record £2.01bn.

While this figure includes full game downloads, DLC and in-game transactions, the success in 2018 of online-only games like PlayerUnknown’s Battlegrounds and Fortnite have helped push this segment up to encompass 50% of all UK software revenues.

After 2017’s slight uplift in boxed software, 2018’s physical revenues remained fairly steady, dropping just -2.6% to £770m according to data provided by GfK Entertainment. However, the impact of the expanding digital free-to-play market contributed to a downturn in sales of pre-owned games, dropping -30.8% to £67.9m, data from Kantar Worldpanel showed.

Game hardware continued to be a core driver of consumer spend in 2018, with sales of games consoles enjoying an uplift of +6.5% to £702m, despite no new consoles being launched in the period, data from GfK showed. 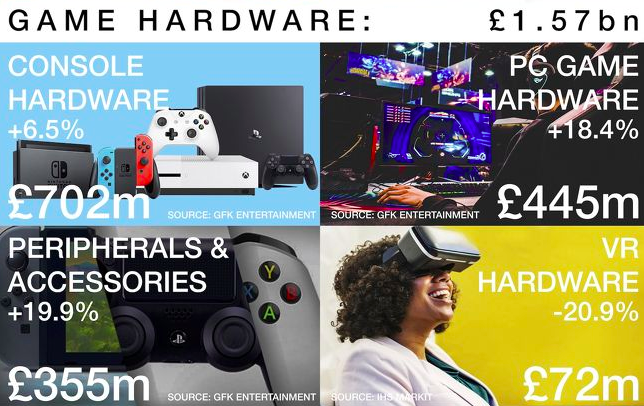 PC Game Hardware saw another strong year, increasing +18.4% to £445m and the peripherals and accessories market similarly grew +19.9% to £355m, showing that UK consumers have a keen demand for the latest technology in their game set-ups.

The VR hardware market saw a more difficult year according to IHS Markit’s analysis, dropping -20.9% to £72m as early adopters await the next generation of headsets, away from the likes of PlayStation VR.

With game-related toys and merchandise representing the largest part of the overall game culture valuation, the closure of Toys-R-Us in 2018 has a significant impact on the valuation, with sales down -23.7% to £59.3m.

2018 was a strong year for game-related films and music, with the release of both Tomb Raider and Rampage at the box office and the demand for video game soundtracks lifting revenues 34% to £23.6m, according to data from the BFI and Official Charts Company. 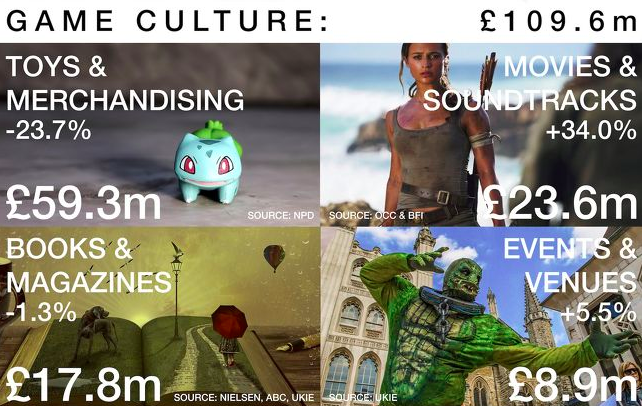 UK games events and venues ticket sales enjoyed another year of growth, with the success of industry mainstays like EGX and Insomnia joined by major new esports events like Birmingham’s ESL One driving revenues up +5.5% to £8.9m overall.

Dr Jo Twist OBE, head of Ukie, said: “2018 has been another record year for the UK games industry.

“Both software and hardware markets have seen steady growth; with the software sector’s digital, online and mobile sales all increased over the 12 months; and the hardware market seeing significant gains across PC game hardware, peripherals, and accessories.

“The UK games industry is a cornerstone of the country’s cultural landscape and continues to work hard to create new, innovative and exciting content that consumers want to experience, and that helps to drive the industry forward year-on-year.”