North American tabletop gamers are in for a special treat, especially those who like fighting games. Massively popular Japanese board game Sakura Arms is coming to North America. The game will release as a Kickstarter project later this month, and will aim to provide Western fans with all of the content that Japanese players currently enjoy.

Sakura Arms is a fast-paced deckbuilder with a board game component. Players choose two goddesses, rendered with gorgeous inked art by indie artist BakaFire. Each goddess has a signature weapon she’s known for, from obvious choices like sword and scythe to more eclectic arms like gadgets and an oar. The goddesses bestow their weapons on the player in the form of cards. Players build a deck based on their preferred combo and then set tokens on the small game board. From there it’s a battle based on strategy and positioning, much like that of a fighting game.

There’s already a passionate community around Sakura Arms in Japan. They’re dedicated to the meta, which shifts just like that of a video game, thanks to yearly introductions of new goddesses. The Kickstarter will make all currently available goddess boxes available to backers. That will make for 18 available goddesses at launch. 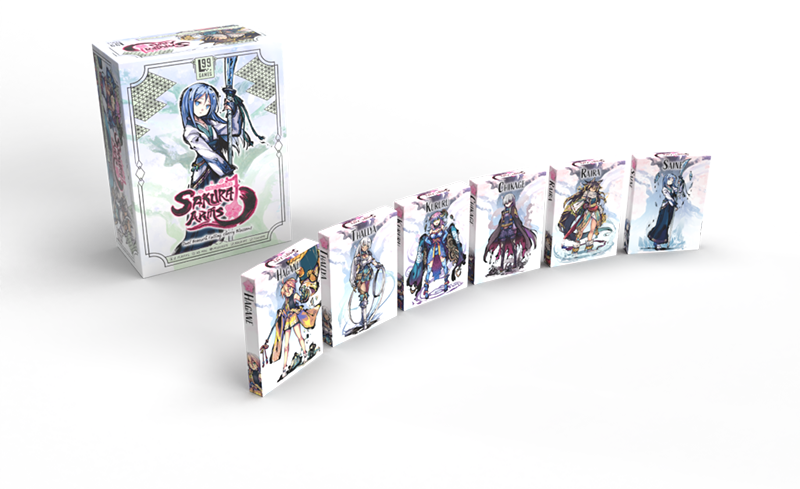 Level 99 Games is responsible for this release of Sakura Arms. The game was actually localized a few years ago by publisher AEG, but that release only saw one box hit shelves. Level 99 promises to be more committed and release all expansions at once, as well as keep up with future expansions.

Rather than release Sakura Arms outright, however, Level 99 is planning a Kickstarter campaign for October 27. The Kickstarter already has over 1000 followers, indicating that interest is strong. One might question why a Kickstarter is needed at that point, but it seems to be the popular option for new tabletop games recently. When Avalon Hill did the same with the revival of beloved classic HeroQuest, one of TheGamer’s writers theorized it could be a way to offset costs. Publishers seem to be catching on that they can pass production costs to eager fans using crowdfunding.

Then again, the lacking release of the first Sakura Arms might have Level 99 playing things more cautiously. It is giving a discount and free shipping to Kickstarter backers. Either way, those interested in Sakura Arms will soon be able to “pre-order” through Kickstart and get their copy next year.

A Microsoft Account Will Now Be Required To Play All Minecraft Games
We and our partners use cookies on this site to improve our service, perform analytics, personalize advertising, measure advertising performance, and remember website preferences.Ok