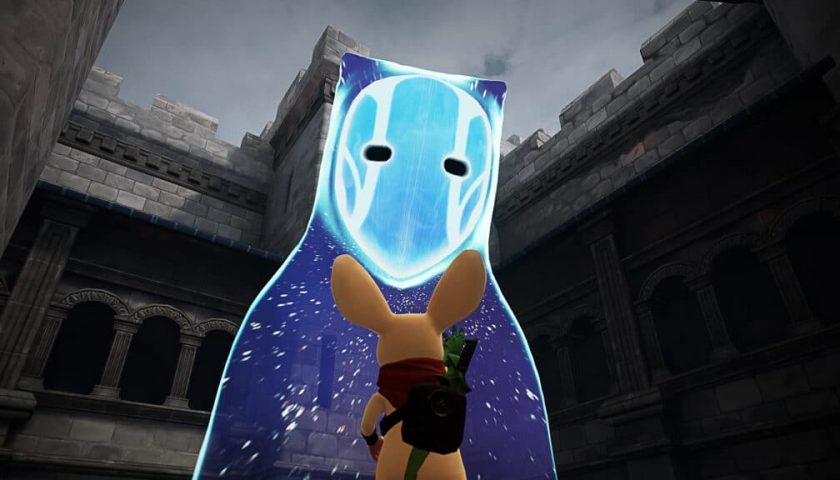 We sat down with Polyarc to discuss the upcoming release of Moss Book 2 and the future of the VR industry.

Moss Book 2 comes to PSVR on March 31, marking the launch of one of VR’s first major sequels. We got a first look at the game earlier this week and thought it was shaping up well, but we also got the chance to chat to Polyarc engineer and designer Joshua Stiksma about the game.

Read on below for a chat on building sequels, exploring player connection, and where the future of VR is headed.

UploadVR: It was really cool to see this demo because I think there was a danger with the sequel that you guys could just fall into the trap of just doing more. You already had such solid foundations. And it would have been easy just to essentially, make new rooms for Quill that would last 10 hours.

But what I really liked seeing this gameplay was, it seemed it was a much more interactive experience for the player this time around. And that’s why I asked the question about, what we are of the other influences, because it seemed the players were reaching into the world more, for example.

And yeah just to talk a bit about that.  The thing that came into my mind was it almost felt in some ways Quill was becoming. As much of a cooperative partner as she was a playable character.

Joshua Stiksma: Yeah, absolutely. I think it’s one of the things that, when we finished the first game, we knew we wanted to do it more.

And I forget, I think we talked around the time of Twilight Garden or might even be just talking more about Moss 2 in general. But one thing we’re just really excited about is what these weapons and these new abilities that we’re going to give the player provide.

That is our goal. We want the world to feel physical and for that, we need to have you reaching in a whole lot more. And, there’s the world, that’s a conduit for reaching in but when it’s with Quill it feels so much more powerful because it’s like she’s looking at you, when you’re reaching in and charging her weapon or reaching in and– in the case, of the hammer, setting off this big hammer that she created for you, you feel more involved.

And, we spent a lot of time exploring, what kind of elements we’d have that would provide that gameplay and feel powerful for players. Experientially powerful and in the case of the hammer physically powerful, but it really amps up the interaction that’s required without needing to have big devices everywhere. It allows us to leverage a smaller device, which is Quill, throughout the world in more varied ways throughout the game.

UploadVR: Is there a part of you that wishes that you had the standardization of the two-handed motion controllers so that you could have potentially two points of interaction at the same time? Is that something that you were looking into, but decided to stick with gamepad for now?

JS: I think we absolutely want to do more with the new tech. With us being committed to PSVR, how do we utilize this as best as we can and play to the strengths of it? So I would be lying if I said I wasn’t excited about the way things are headed and where they’re going and how we can utilize that more for Moss as a franchise and as a series.

There’s still a lot that we’re able to do with the existing single tracked control. With the way that we do that motion tracking for PSVR and by setting proper constraints and understanding where the strengths are we can still come with some pretty powerful experiences.

But also keeping in the back of our minds, how do we level this up for whatever the next thing is? So, yeah, excited about releasing on PSVR and excited for the future.

UploadVR: What about the storytelling this time around? Cause obviously I expect we’ll return to, the kind of page-based narrative when you’re not directly in the world, but is there going to be anything more in terms of much more direct in-game cinematics and moments of communication?

JS: That’s a good call. We didn’t really talk about that in the session, but yes, we will be returning to the storybook narrative, the chapters. They’re going to go through the game. And I am pleased to say we are going to have I would say substantially more in-game storytelling that we couldn’t quite pull off for the first game, mostly due to just limitations for the studio.

UploadVR: What about the direct communication with Quill? Obviously you have so many cool ideas in the first one. And there must have been so many ideas leftover that you had more time to hopefully implement in this one. Are there new ways to, even just in any given incident, you can stop her from walking and just talk to her essentially in new ways?

JS: Yeah, there are. I’ll try not to go into too much of them, but mentioning talking to her we are excited to, pay attention to what is going on with the mic on the PSVR headset. She’s not going to intelligently be able to make out what you’re saying, but understanding that there’s somebody there who’s speaking, maybe her ears might react to that in some way.

Or perhaps if somebody is blowing through the microphone, that could actually be wind that might affect her. Some exciting things along that vein, I think would be, or could be things that players really enjoy and make it feel they’re in the world a little bit more.

So yeah, things like that and, we do want to have plenty of opportunities for you to, interface with her directly. Players loved giving her high fives. They loved petting her and all of that. We’re going to have more of that in the game for sure.

UploadVR: You mentioned a winged creature following her throughout the story. Is that going to be almost– I don’t expect it to be this dynamic of a system — but the Resident Evil Tyrant kind of thing of this big force, just showing up from level to level, unexpected moments that cause these kinds of real panic moments.

JS: I wouldn’t want to draw any comparisons like that. I think it’s going to be more story-based and emotional with moments of this character coming in. We wanted to build upon what we have from the first game where we didn’t just be like “Here’s your big boss character at the end.”

We wanted to through not just gameplay of that, yes, this character will show up at various points throughout the game, but also in terms of story and learning about these characters in the world. We want to make sure that you understand who this villain is and understanding motivations for that character as you’re exploring the world and we reveal more of the story to you as a player.

UploadVR: And just moving, to the industry a bit more generally what does it mean to be releasing in 2022? We started the year with the hope that we’ll be getting PSVR 2 potentially towards the end of the year, maybe early next, Project Cambria is coming.

There’s talk of Apple and everything like that. It seems like a transitional year for VR hardware almost. So it’s an interesting time to be releasing in some ways.

And I think for me, one of the big bits of excitement is seeing what the larger playerbase really push hard on on VR AR and mixed reality kind of stuff. Where you see that there’s potential to, for Polayrce as a studio, to keep growing and creating new experiences on these new sets of hardware.

Because we’re a creative studio we’re focusing on VR at the moment but, as these new things come out, we’re going to evaluate that new tech. And that’s really exciting because we have what I think is a really cool and powerful IP that we’re working with.

And there’s so many different ways to tell these stories. It starts to get your mind spinning about what potential opportunities there might be for us as a studio for VR as a medium or as a platform players to engage with this stuff. For me, I’m excited and you see just even the leap getting to Quest and now, you’ve got a Quest 2 and you start hearing about a PSVR 2, and you mentioned the Apple thing.

Personally, I’m very excited about Apple just because I’m a bit of an Apple fanboy, but it’s exciting.

UploadVR: I feel specifically with Cambria, obviously you guys aren’t confirming any other ports for Moss 2 right now, but that’s eye tracking and that’s face tracking and that certainly seems like something. You could shoot  Quill a smile or she’ll know when you’re looking at her, right?

JS: Yeah. That tech specifically is amazing. I’m really excited to see what everybody’s going to do with that kind of technology, but I think you kinda hit it there on what’s exciting for Polyarc. The ability to try to communicate with the character through a language we can all understand.

It’s amazing. If you’re having a conversation with anybody at all, those are key things that make that conversation real. And with us being able to connect in that way, it’s only gonna mean that we’re able to have our experiences feel more real. And I don’t want to downplay how tough that probably will be for us to implement and pull off because there’s probably going to be a fine line between, oh, this is just a quick reaction and then skirting over it too, “Wow this is a real person or a real character that I feel is real.”

We’re going to have to spend a lot of time making that, but it’s powerful. And if we can keep creating those kinds of powerful experiences I think that the future is bright for VR.