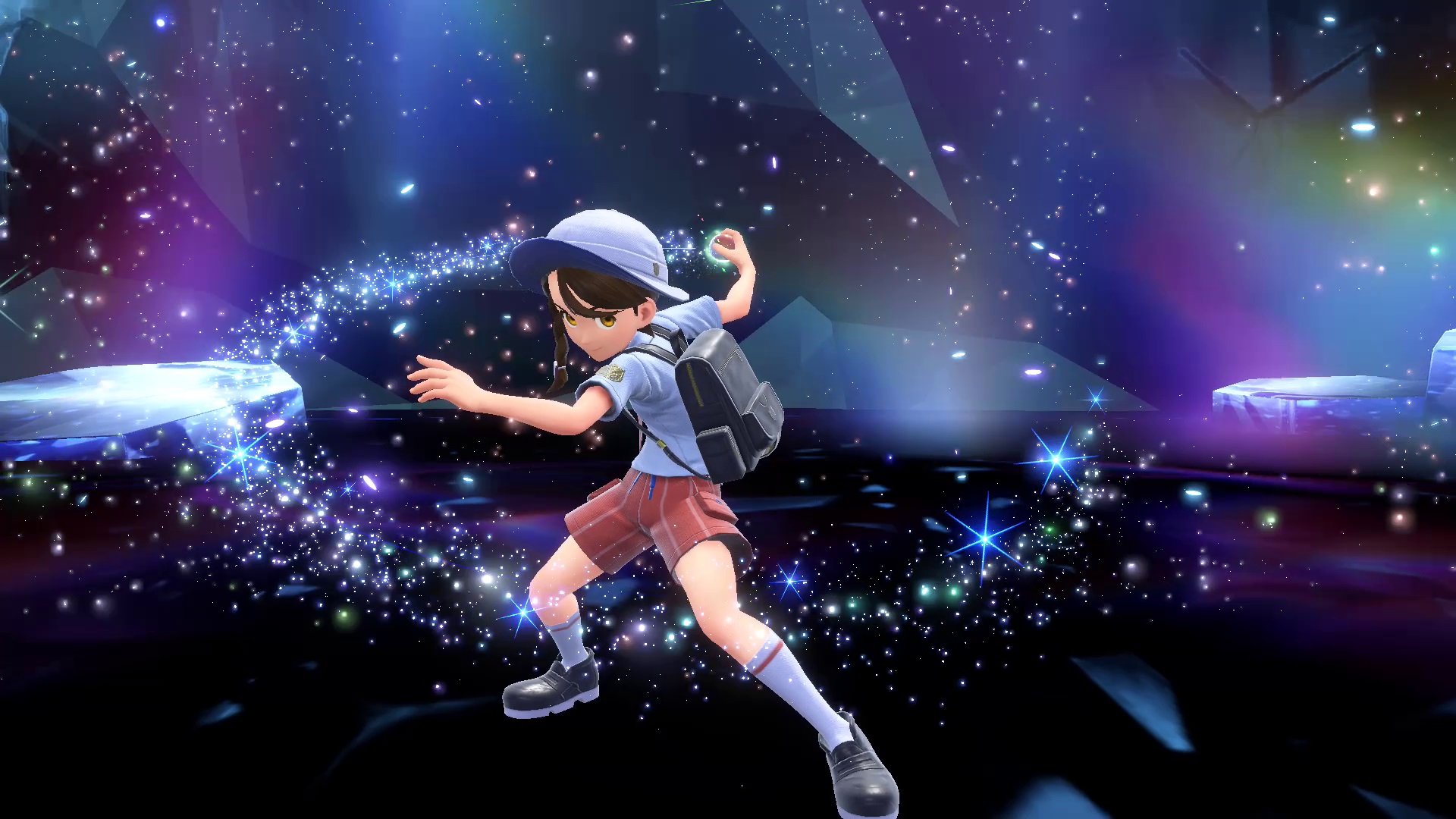 The ninth generation of Pokémon games is a lot more innovative than first assumed, but there are still problems…

Though not without its issues, Pokémon Legends: Arceus was a much needed breath of fresh air for the franchise, especially when compared to the relatively safe Pokémon Sword & Shield.

So, when Pokémon Scarlet & Violet was announced barely a month after Pokémon Legends’ release, it wasn’t surprising that many were disappointed that it looked like the series was taking several steps back. Complaints regarding graphics aside, early footage made it look like Scarlet & Violet would be continuing the same old formula that was already getting old by the mid-2000s.

Between more recent updates from The Pokémon Company and our own hands-on session, however, we’re pleased to report that Pokémon Legends was not some one-off experiment. Instead, it was very much a testing ground for Scarlet & Violet and perhaps the future of the series.

At its core, Scarlet & Violet isn’t that much different to the previous games. You’re still embarking on an adventure to catch wild pokémon and pit them in turn-based battles against each other to get stronger. The key difference is that you now have complete freedom in how you approach your journey.

It had already been confirmed that these two would be the first proper open world games in the series, but that detail hadn’t really sunk in until we actually played them. Much like The Legend Of Zelda: Breath Of The Wild, the world is your oyster. This isn’t Pokémon Legends, where the world is divided into separate areas; you can seamlessly walk from one town to another with no loading screens whatsoever.

There aren’t any blockades, like thirsty guards or random herds of Psyduck, that prevent you from going somewhere you might be under-levelled for. The only restrictions came from The Pokémon Company itself, telling us where we could and couldn’t go to avoid spoilers.

This is best exemplified with the new mounts – Koraidon for Scarlet and Miraidon for Violet. They’re essentially all the ridable pokémon from Pokémon Legends combined into one, able to dash across plains, swim through water, climb walls, and glide through the air. Since you get them relatively early into the adventure, there really is nothing stopping you from exploring every facet of the region of Paldea.

Admittedly, what we saw of Paldea lacked the mystique of Hyrule, due to the simplistic art direction and flat visuals. However, we were still very easily distracted and kept getting torn in random directions, just to see where one path would lead or because we spotted a brand new pokémon and wanted a closer look. The world also feels quite dynamic, since it retains Pokémon Legends’ day to night cycle, with the weather even sometimes changing naturally during the course of a battle.

Exploration wound up eating into a lot of our hour-long session, but we managed to have enough time to attempt one of the game’s three main storylines. Since we already knew what to expect from the gym challenge (what with it being a staple of the series since the very first games), we decided to infiltrate a Team Star base, with them being the main antagonist force of Scarlet & Violet.

Rather than run through a gauntlet of one-on-one trainer battles, you instead have to make use of the new auto battle feature. This means that at any time you can have one of your pokémon run alongside you and send them out to battle wild pokémon without needing to give them instructions.

The Team Star raid worked a bit differently than you might expect, since you must face swarms of enemy pokémon sent out by trainers, and you can only use three of your own pokémon to defeat a certain number within a time limit.

However, we were able to send all three out at once, letting them pick off smaller herds one by one. It was certainly a novel experience, but not very stimulating. We hope not every Team Star encounter consists solely of these raids.

Thankfully, it ended with a traditional battle against squad leader Mela, who was far more challenging. It was an invigorating encounter, one enhanced by the rocking battle music and the fact that we even got to fight the Starmobile Mela comes riding in on, making it feel like a proper boss fight.

That said, what left us most excited was all the quality-of-life additions, most of which have returned from Pokémon Legends. A lot of fans were concerned that these had been dropped, but we’re happy to confirm that most are still present and accounted for.

Notifications of your pokémon gaining a level don’t interrupt gameplay, items can be picked off the floor as you run past them by just tapping a button (even while riding Koraidon/Miraidon), and the move pools return – meaning you can switch up your pokémon’s moveset whenever you feel like it.

The game still stops in its tracks to let you know that a pokémon can learn a new move, like the older games did, but we discovered an option in the menu to turn that off. There’s also an option to automatically send newly caught pokémon to the PC boxes, so the game doesn’t ask you every time if you want to add them to your party. You can even disable story cut scenes altogether, which sounds perfect for speedrunners.

It doesn’t seem like you can catch pokémon without battling them first, however, which is somewhat disappointing. Stealth isn’t really a mechanic in Scarlet & Violet, though, since pokémon won’t really try to run away if they spot you. However, the aiming mechanic has been brought back, meaning you can still throw a pokéball at a pokémon from behind, catching them off guard and giving you an extra turn in battle.

The games have introduced some wholly original improvements too; the most striking being that trainer battles are completely optional. No longer will you get drawn into a battle while unprepared because you walked past a trainer’s eyeline; you have to approach them to trigger the battle.

League Points, which you can earn as you progress the story or by handing in materials dropped by wild pokémon (another holdover from Pokémon Legends), can be used in place of money. So even if you spend all your cash on cosmetics (which aren’t gender locked), you can still stock up on potions or other items using League Points.

We were also able to play around 30 minutes of the multiplayer, where we explored the region and took part in a raid battle against an especially powerful pokémon with three other players. While there are some limitations (you can’t team up in regular battles, for instance), you are otherwise given full rein of Paldea as a group, able to either explore the region together or split up on separate journeys and meet up again later.

This is the closest we’ll likely ever get to a Pokémon MMO, and we can see this becoming Scarlet & Violet’s most popular feature.

Everything we saw makes Scarlet & Violet feel like a much-needed evolution for the series, which only makes its obvious shortcomings all the more frustrating. You’ve no doubt already formed an opinion on the graphics and lack of voice acting and while the discourse surrounding them can get extreme, the complaints are unfortunately warranted. It’s a shame that both aspects continue to get the short end of the stick.

What’s worse is that, despite the simple graphics, the game struggles to maintain a consistent frame rate. Even non-playable characters that were a stone’s throw away would occasionally move like they were in a zoetrope, the frame rate of their animation falling to single figures.

It’s not a good look when something more graphically intensive like Xenoblade Chronicles 3, even at its busiest, can maintain a stable frame rate. Given we were playing an early build, this is hopefully something that will be less of an issue come the November release. Although we wouldn’t bet on it.

The good news is that Scarlet & Violet don’t feel like a slightly tuned up Sword & Shield. There is an attempt to significantly change the formula and build upon what Pokémon Legends: Arceus introduced, which should make the games appealing to not just casual fans and newcomers but those that have become disenfranchised by the series.

We can confidently say this is not a ‘one step forward, two steps back’ scenario for the series. Many steps have been taken to both refine the experience and craft something original. It’s just that those steps don’t include updating the visuals and adding voice acting, which remain the only things keeping Scarlet & Violet from feeling like they could’ve come out 10 years ago.