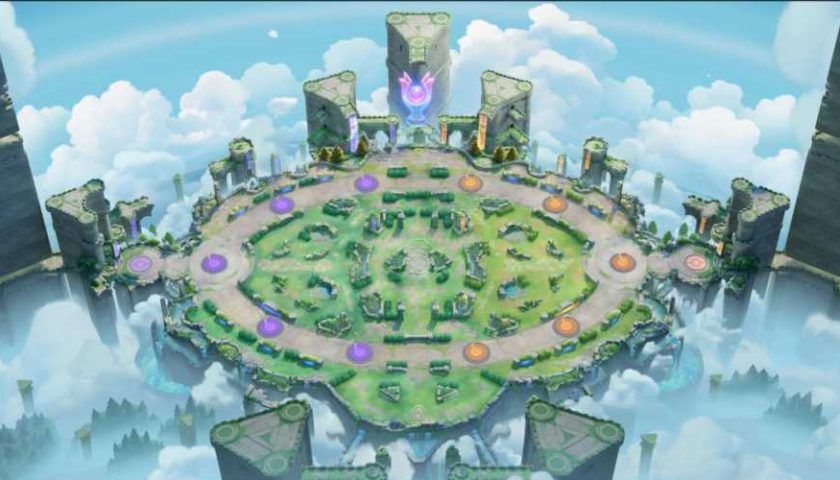 Although Theia Sky Ruins shares many features with Remoat Stadium, there are many crucial differences. Possessing a slightly different layout, new features, and a new cast of Wild Pokemon, there is a lot to learn about Theia Sky Ruins if you wish to emerge victorious at this location. 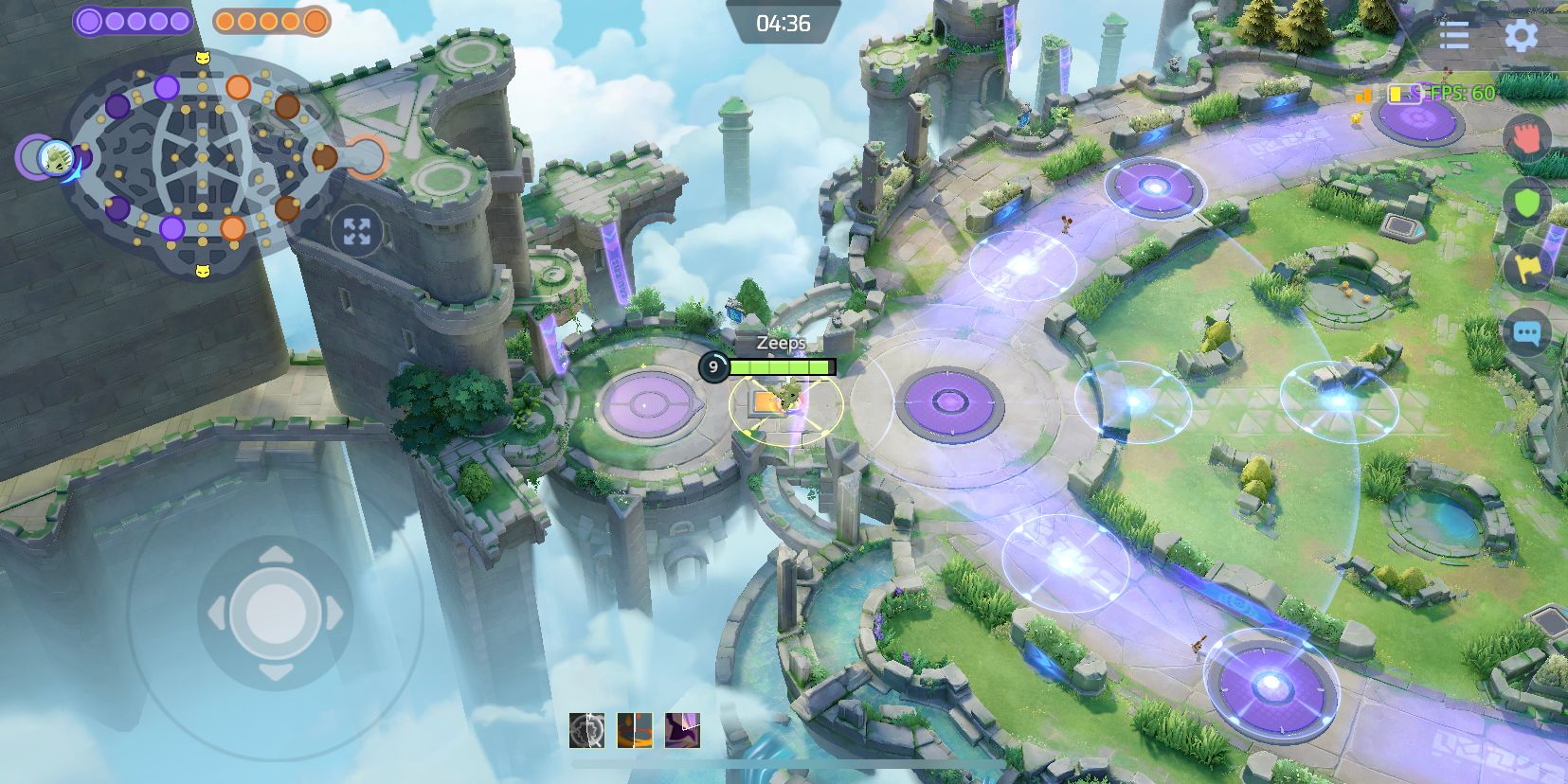 Just like Remoat Stadium, Theia Sky Ruins is broken up into three main lanes: Top, Middle, and Bottom. Each team has five Goal Zones to defend on their half of the map; two in both the top and bottom lanes and one directly outside their main base. Players will spawn in their respective main bases, located on each end of the arena horizontally. Enemy players are unable to enter your main base; while you and your allies will receive rapid health regeneration.

Mimicking the other full-sized map in Pokemon Unite, each team has two Jump Pads that can be used throughout a match. These Jump Pads are located on each team's side of the battlefield, used to quickly launch yourself to the center of the map.

Additionally, a Super Jump Pad will appear in each team's main base at the five-minute mark of the match. Similar to other maps, this can be used to quickly launch yourself to one of six different locations on your side of the battlefield.

When you are inside one of your team's Goal Zones, you will receive a small shield and slowly regenerate health; proving to be a relatively safe location for you and your allies. When attempting to score points, you can only score on the two opposing Goal Zones that are the closest to your side in either lane. These zones, called Active Goal Zones, will be lit up on your mini-map at all points in a Unite battle.

In order to advance past this and score on other Goal Zones further down in each lane, your team will have to break the Active Goal Zones in the way first. Each outer Goal Zone requires 80 points to break, inner Goal Zones require 100 points, and central Goal Zones are indestructible. Once one of your Goal Zones is broken, you and your allies will no longer receive shield or health regeneration at that location.

Points scored when there are two minutes or less remaining in a match will count as double.

Additionally, you and your team will have a speed boost when traveling between your main base and any of your Goal Zones that have not been broken. On the other hand, enemy players that travel in these areas will experience a decrease in their movement speed. This combination allows for your team to quickly and safely retreat when necessary.

There are two different kinds of berries that will spawn throughout Theia Sky Ruins, each providing the user with a specific benefit when consumed. Information regarding these berries can be found below, including their benefit and spawn location.

*These Pokemon only spawn when there are two minutes remaining in the match, replacing its previous evolution

In addition to these, there are two Wild Pokemon that grant buffs to whoever knocks them out. The following Wild Pokemon can be found in Theia Sky Ruins, accompanied by the specific buffs that they provide. 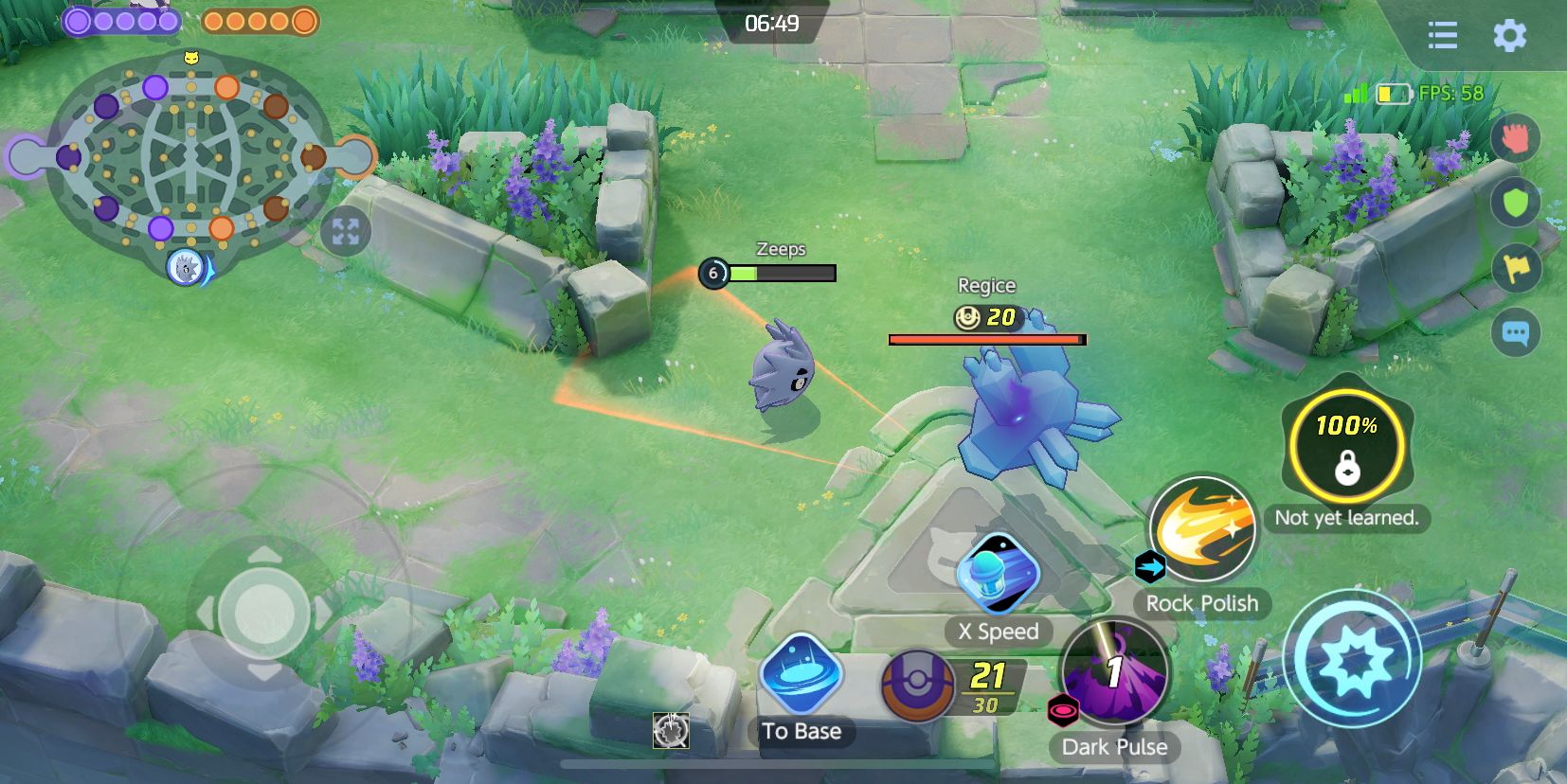 Boss Pokemon appear at specific times throughout a Unite match, each granting a bonus to the team that secures the final blow. These bonuses are significantly beneficial, so make sure to do your best to defeat these Pokemon when possible. There are five different Boss Pokemon that may spawn throughout the course of a match at Theia Sky Ruins, each provided below with the benefit that they provide.

Regirock, Registeel, and Regice each have a random chance of spawning when it is time for the Boss Pokemon to appear at the bottom lane.

Although you can find success when playing with a number of play styles on Theia Sky Ruins, the following strategies are recommended.