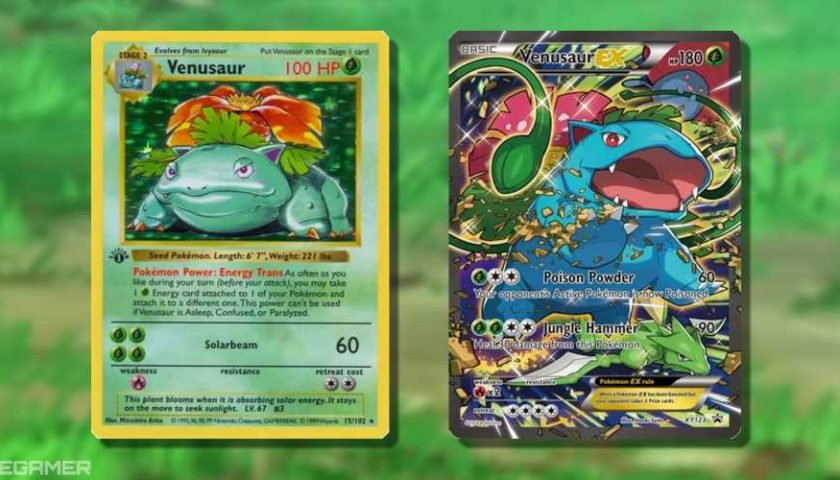 Lately, Pokemon cards, and the trading card market in general, are seeing an increase in value and popularity. As to be expected, the original sets of cards are shooting up in value, with the Starters often going for the most on average.

Venusaur isn't always as popular a Pokemon as its Water- and Fire-type counterparts, but the Kanto region Grass-type starter still has a large contingent of fans. Among the dozens of cards it has received over the years, it's managed to obtain a good number with a reasonable value that fetch a pretty penny.

Updated October 10, 2022 by Jacqueline Zalace: Card prices can change daily, so we've updated this guide with accurate prices for the most valuable Venusaur cards. Additionally, we've updated the artwork for each card so you can truly see what makes them shine. 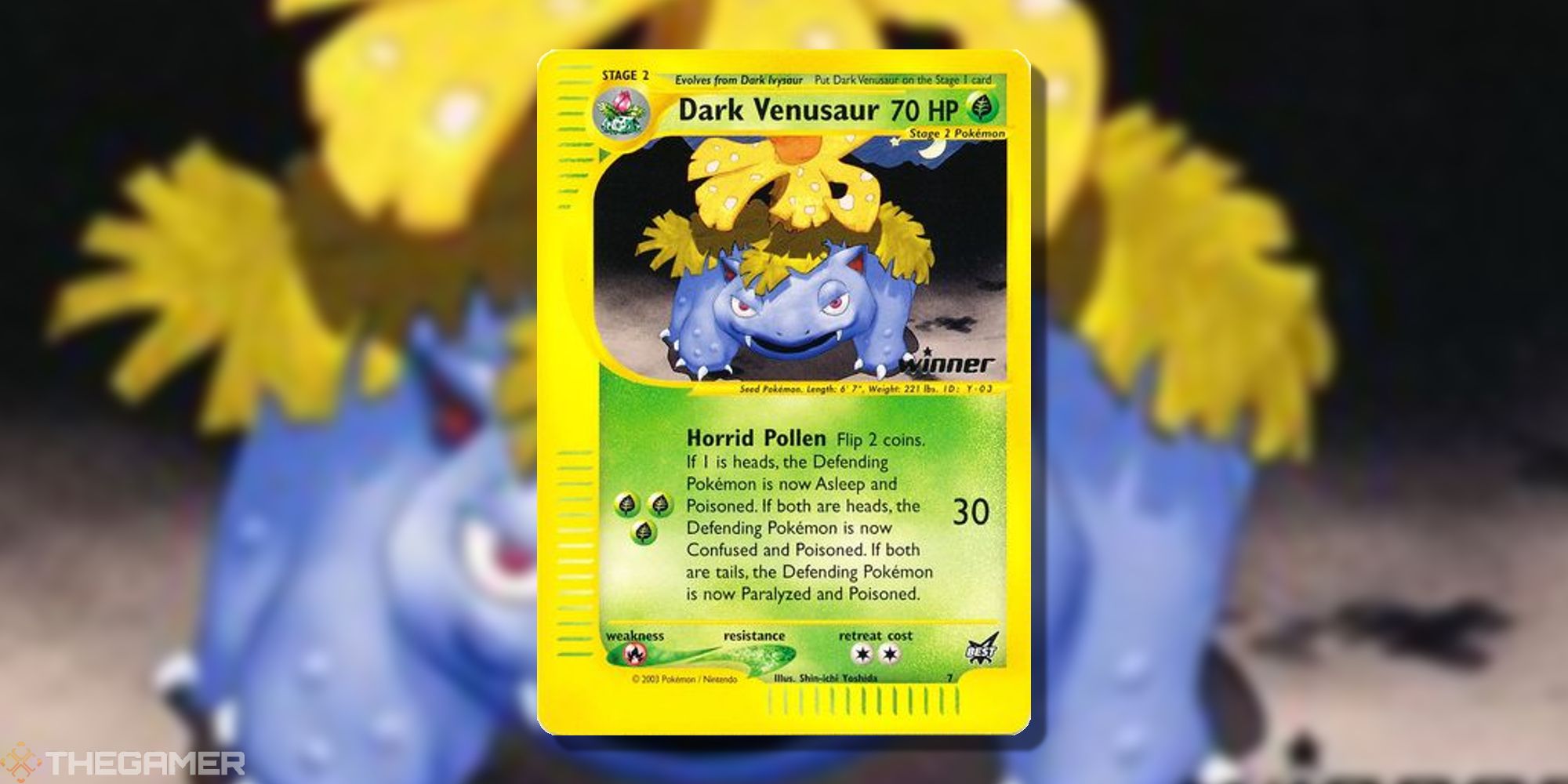 Coming in as the 10th-most valuable Venusaur card in existence is the Jumbo Card version. Unlike other cards on our list, cards in this set aren't meant for tournaments; instead, they are more like collectibles.

Rather than depicting a normal Venusaur, the Jumbo Card variation brings us Dark Venusaur. Interestingly, this Dark version of Venusaur was not part of the Team Rocket expansion that was later released, making this card quite unique.

The XY Promo EX card featuring Venusaur may be ninth on this list and sell for around $50, but it's arguably the best-looking art that the Kanto region Grass-type starter has ever received.

In addition to displaying the full art of Venusaur, the card also has Scyther make a cameo in the bottom right. Promo cards are interesting because they are often seen as cheap or common upon release, but as the years go on, people lose them and/or the promotions with the cards end, and in turn, the card garners a ton of value. 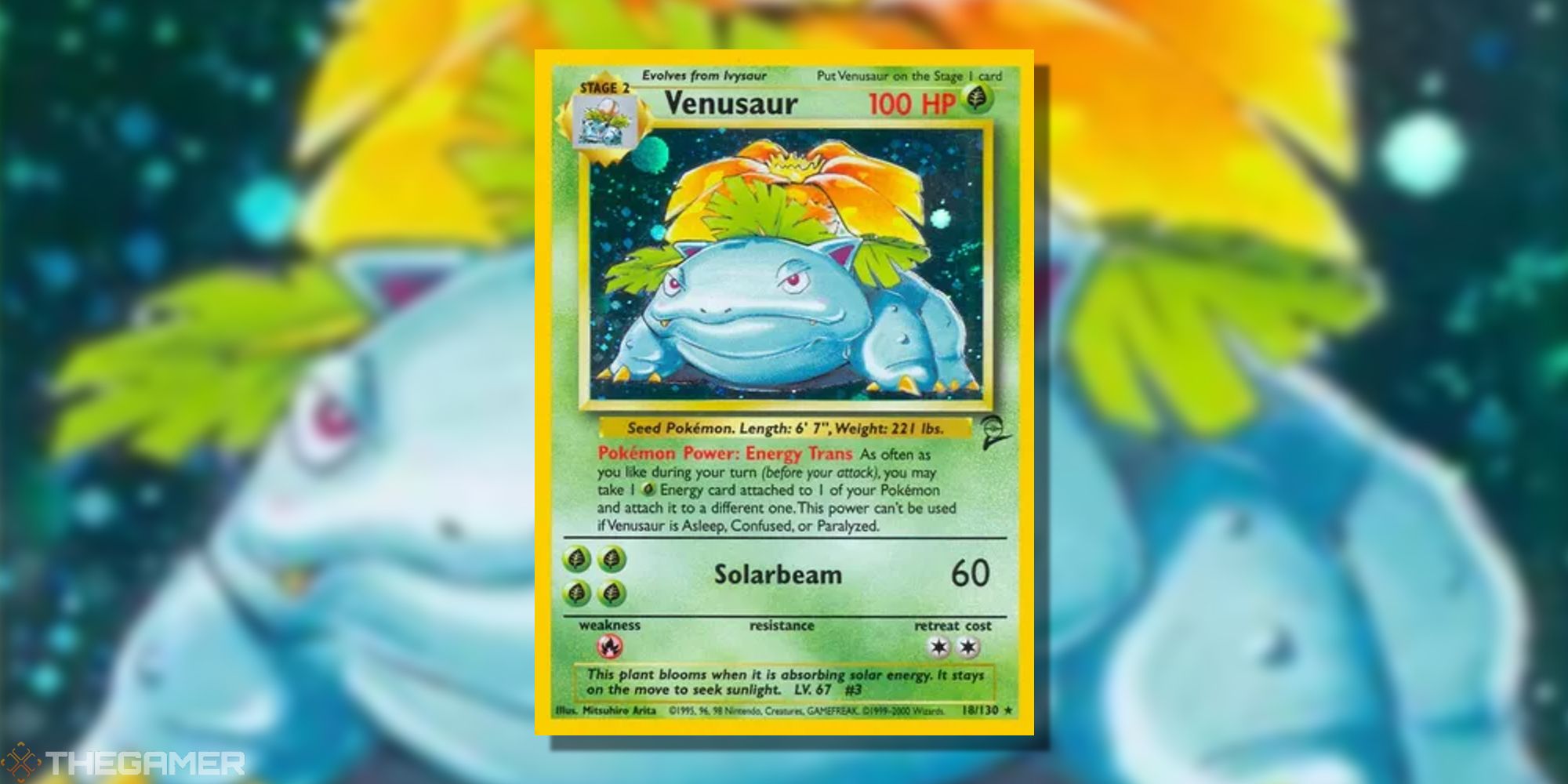 Now, the Base Set 2 version of Venusaur is the first of four different cards on this list that all feature the same exact art. The difference in value is solely based on the rarity of the set the card is in.

With Base Set 2 cards being much more common and obtainable than the original Base Set and shadowless Base Set cards, that means that this specific Venusaur card sells for around $57. That's still a pretty penny to spend on a piece of cardboard, but it's nowhere near the heights of where this floral toad reaches. 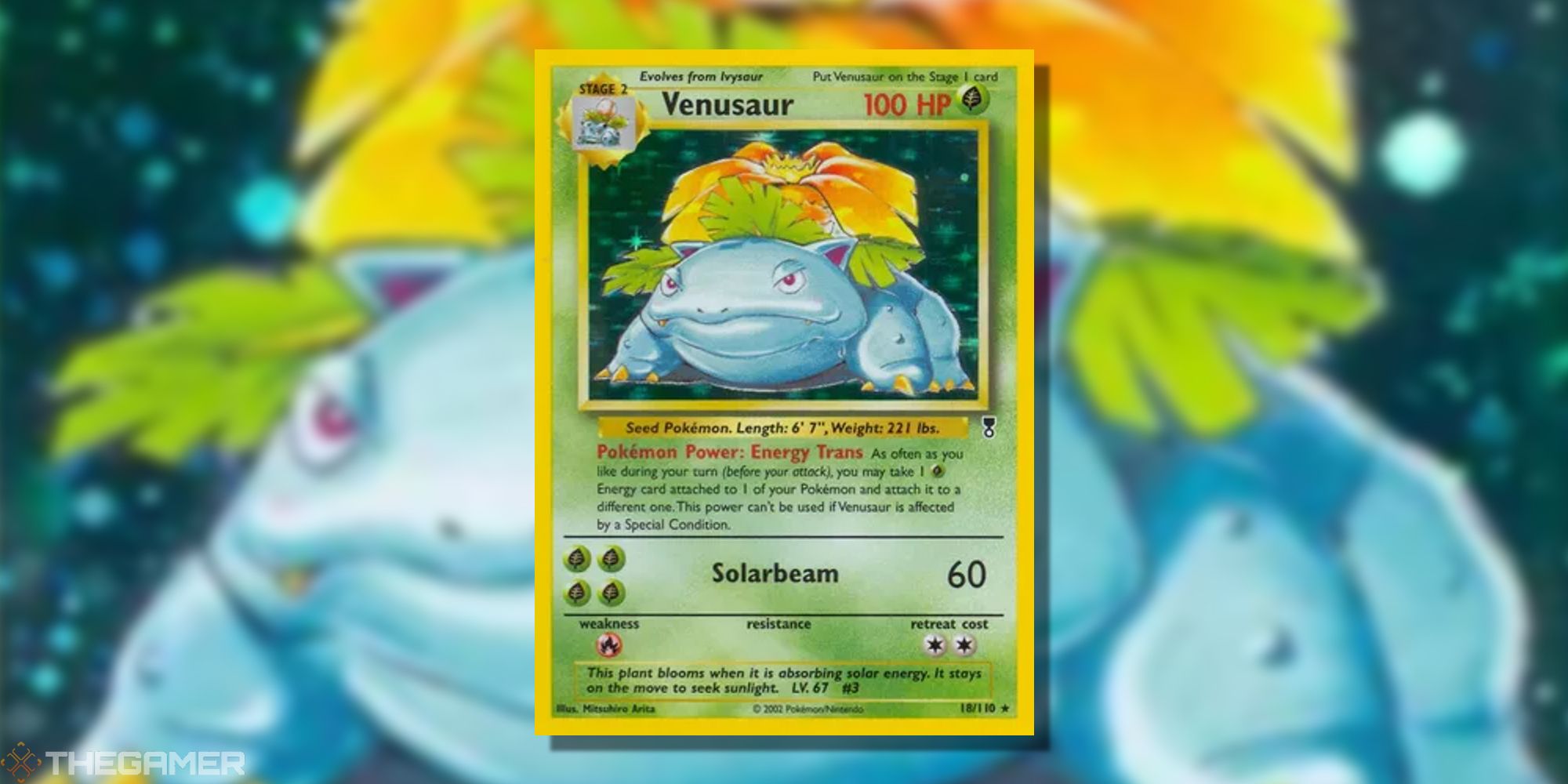 The Legendary Collection, released in 2002, was intended to bring back cards from the older sets in an attempt to allow fans to get their hands on some of the most iconic cards. This set also introduced reversed holofoil cards to the set and doesn't receive recognition for doing this.

Venusaur's card is a reprint of the Base Set version and sells for $64. Wizards of the Coast planned on releasing a Legendary Collection 2, but their license was pulled before they had the chance. 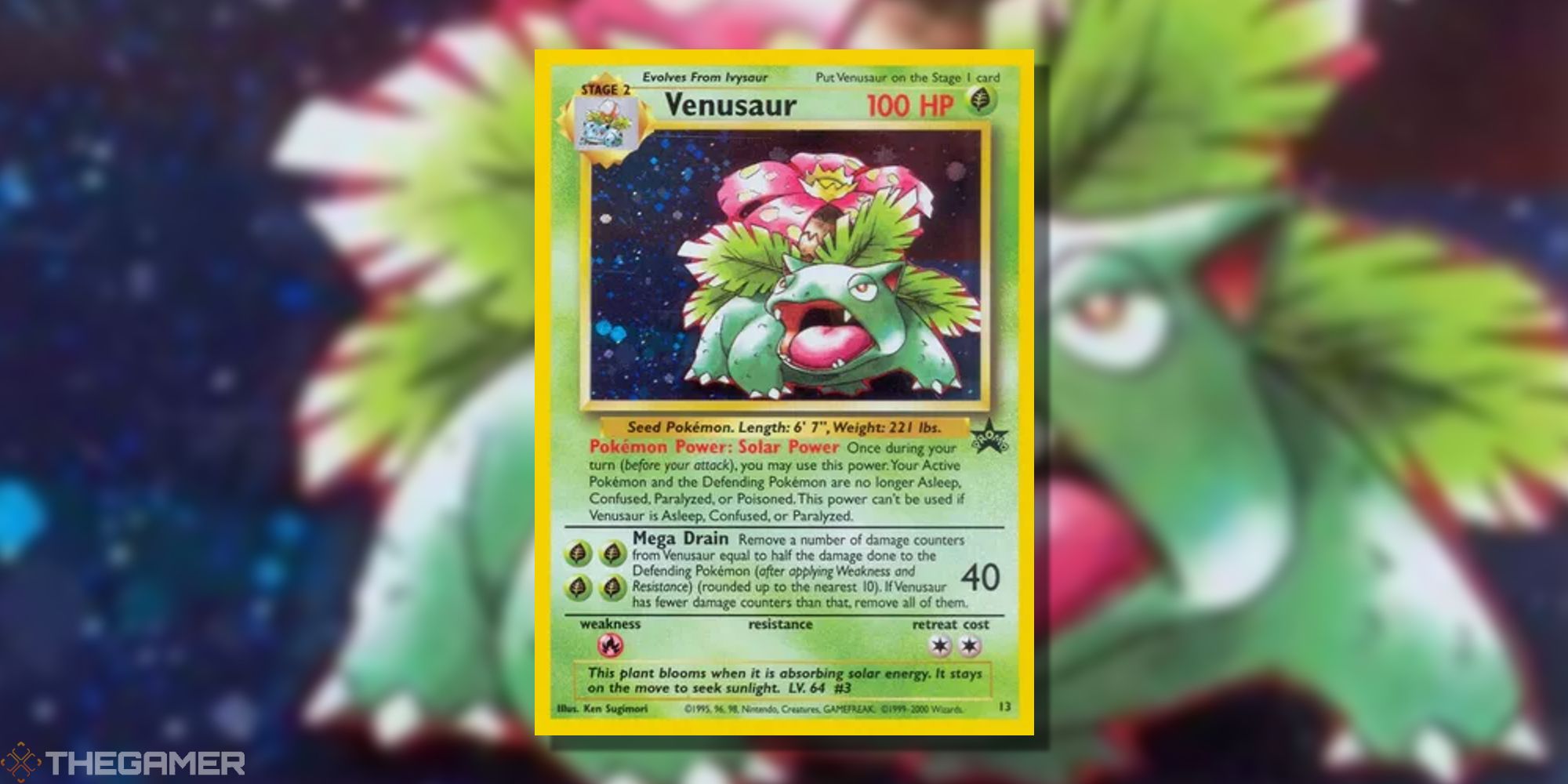 Back when Wizards of the Coast used to make Pokemon cards, they had a track record of releasing some iconic promo cards for some of the franchise's most beloved Pokemon. It should come as no surprise that a promo card for Venusaur that was reminiscent of Erika's Venusaur was among the releases.

This card currently fetches about $65. Scarcity is the ally of value, and in this case, it's super hard to track down this promo independently without the aid of an official shop. 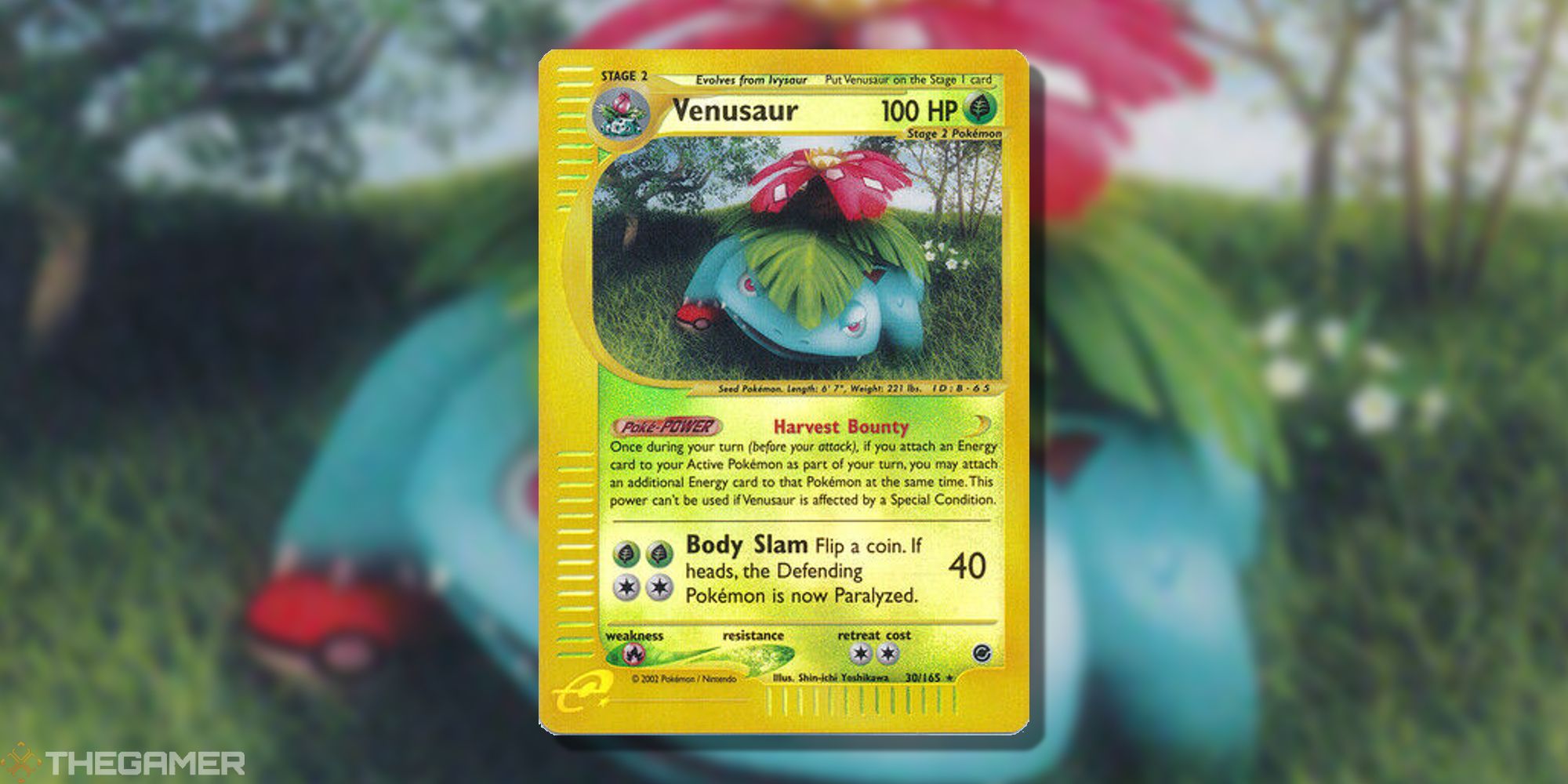 Expedition is a set of Pokemon cards that isn't as notable as Gym Challenge or the Team Rocket sets but came out over 20 years ago at this point, back in 2001. The set is known for its unique card border that really shifts the overall layout and design of the cards.

Venusaur's card in the set sells for around $67, but those who simply want to own it can get it for as low as $15 in a damaged state. The art itself feels like a mix between claymation and a porcelain-like surface that makes Venusaur look semi-realistic. 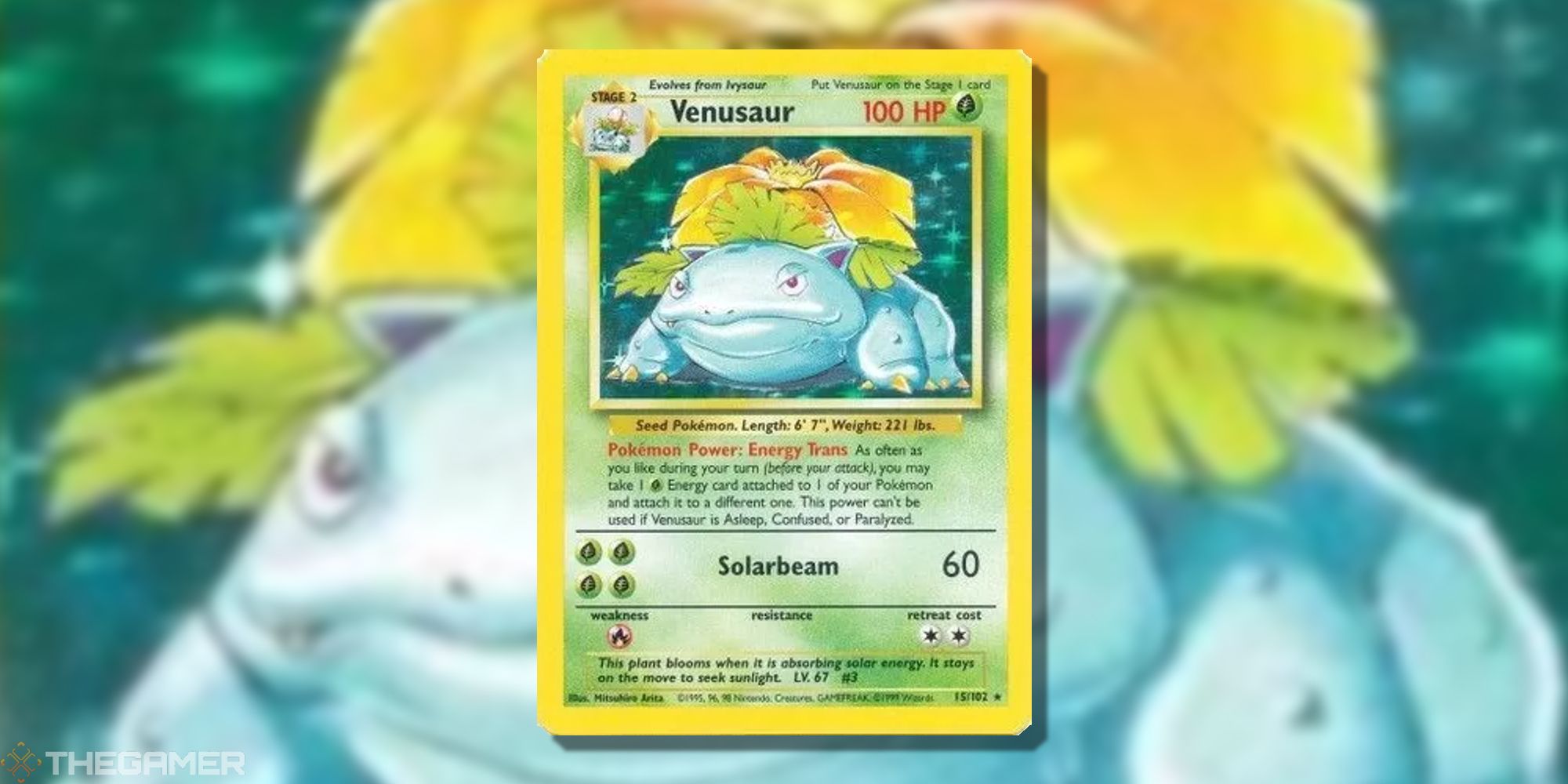 People might assume that the Base Set version of Venusaur would sell for much more than $80 on average, but there are some factors in play determining that price. The first is that Venusaur is sadly not as popular or desirable as either Blastoise or Charizard.

In terms of specifically Venusaur cards, though Base Set is rare, it doesn't hold a candle to the rarity of the shadowless version of the Base Set. Either way, it'd be hard to find a Gen I fan who wouldn't be stoked to get a Base Set Venusaur card. 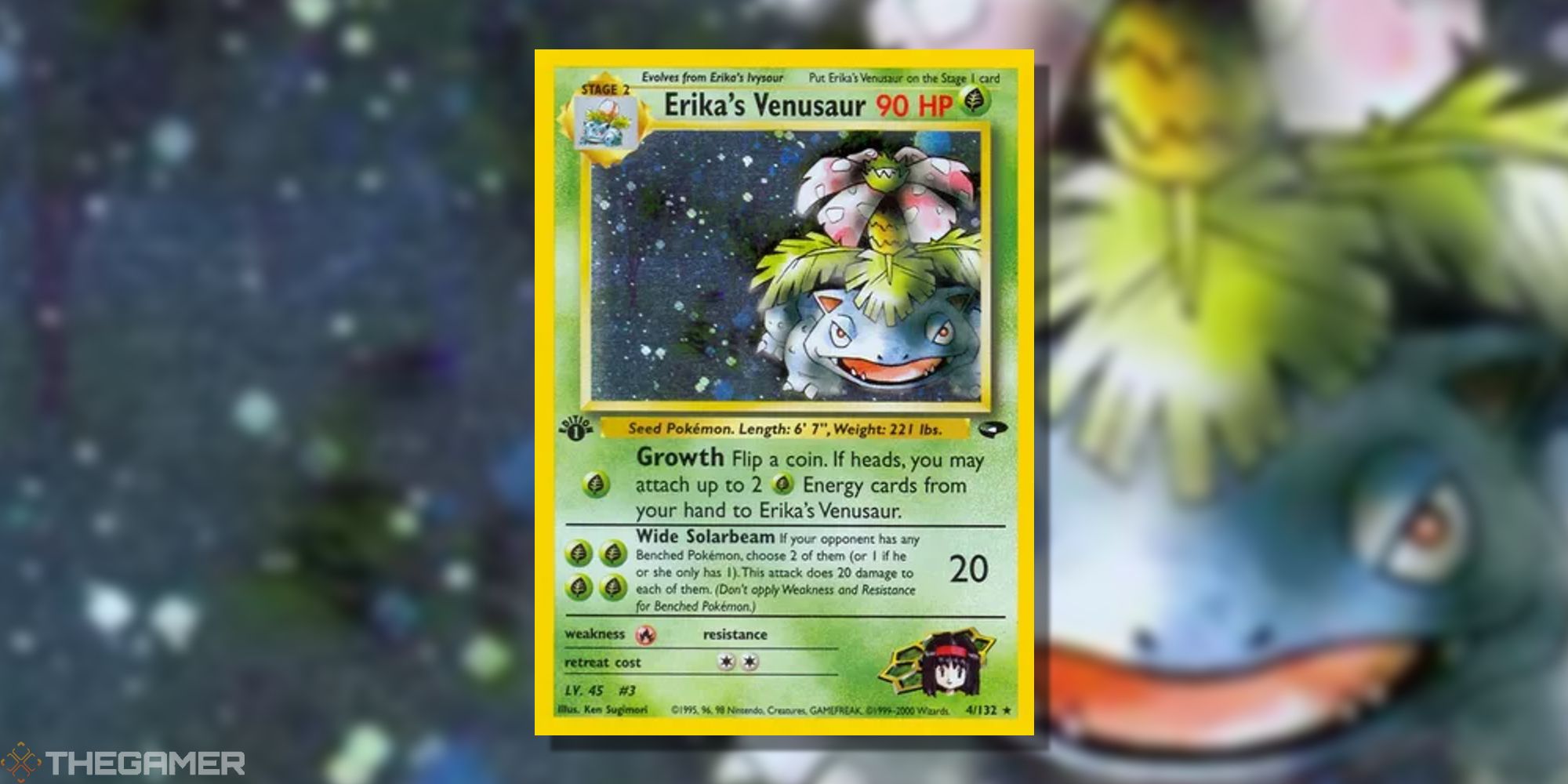 Many of the rarer cards in the Gym Challenge set from 1999 feature card art in which half of it is blank and the Pokemon takes up the other half. That is precisely the case with Erika's Venusaur, a card that currently sells on average for around $95.

The art has Erika's fully grown Venusaur looking straight at the viewer with its back flower on full display. Outside of the Base Set and Team Rocket cards, it's hard to find a set of Pokemon cards more nostalgic and meaningful to Pokemon fans than the Gym Challenge series. 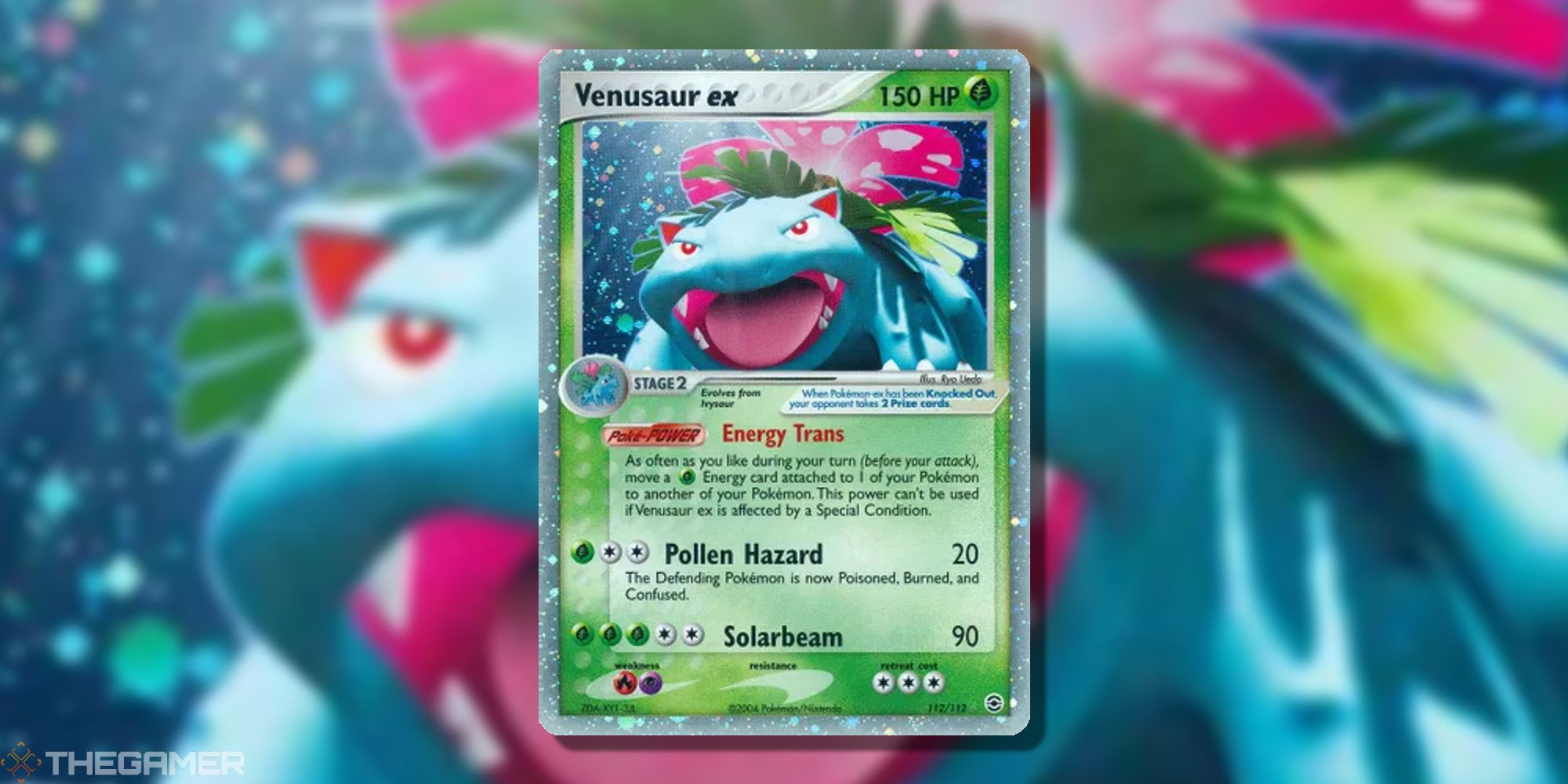 Perspective is important in the world of trading cards, and though the FireRed & LeafGreen Venusaur card isn't the best-looking card, its value is undeniable. Yes, it may go for $200 on average, but the impressive thing is that a moderate quality version of this card sells for $110, which is more than the Base Set 2 version of Venusaur.

The FireRed & LeafGreen set was released in 2004 to coincide with the releases of the iconic Kanto region remakes of the original two games, which were Pokemon Red & Pokemon Blue in the United States. 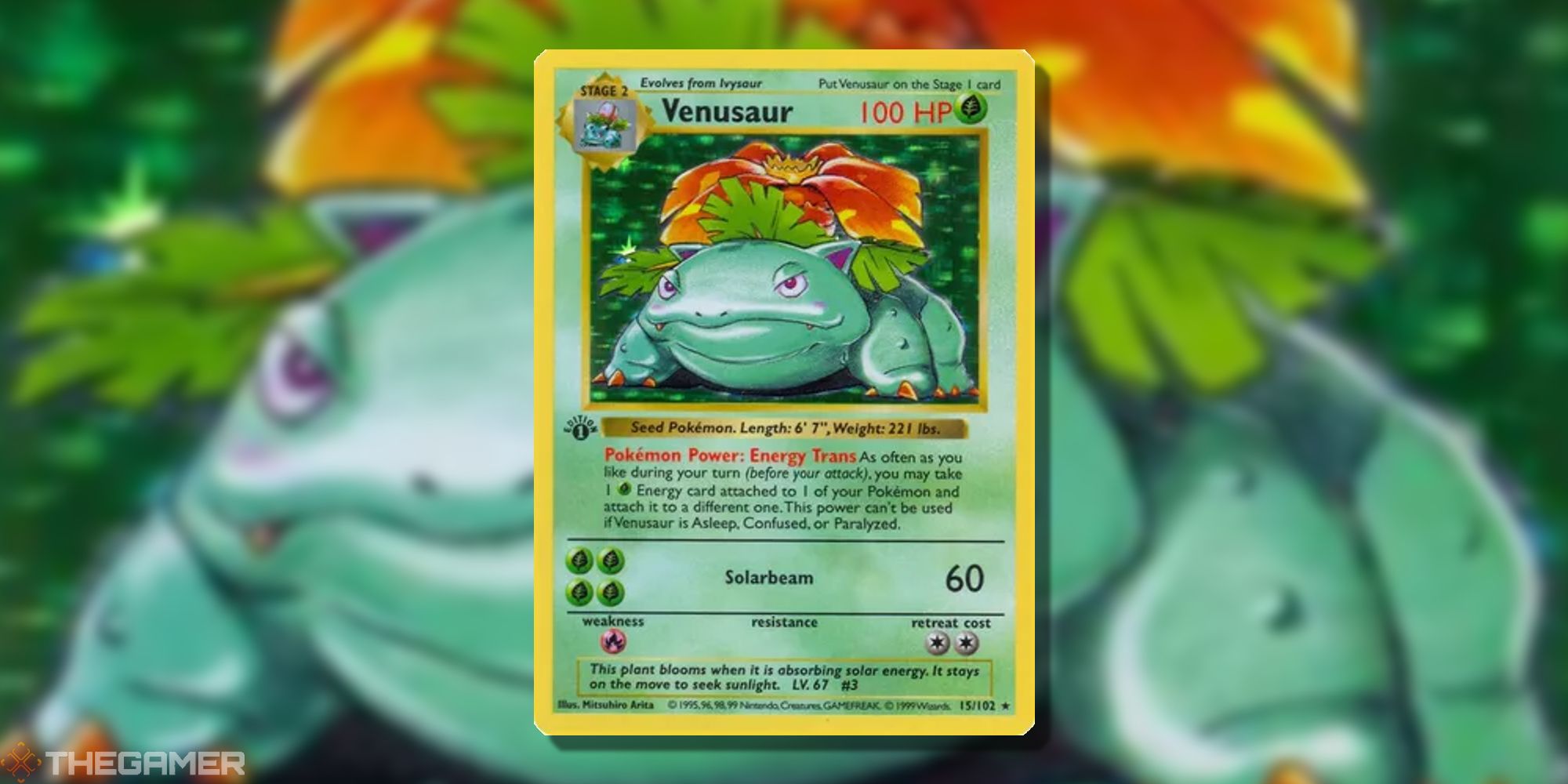 The Holy Grail set for almost every one of the original generation of Pokemon has to be the shadowless version of the Base Set. It holds the most value due to it being one of the rarest sets in existence.

At a glance, it may look similar to the Base Set version of the card with no discernible differences, but a closer look will reveal the lack of shadows on the card backdrop as well as the card text. Venusaur's shadowless Base Set card goes for over $300, and it's so sought after that even a damaged version of the card fetches more than many other cards on our list.