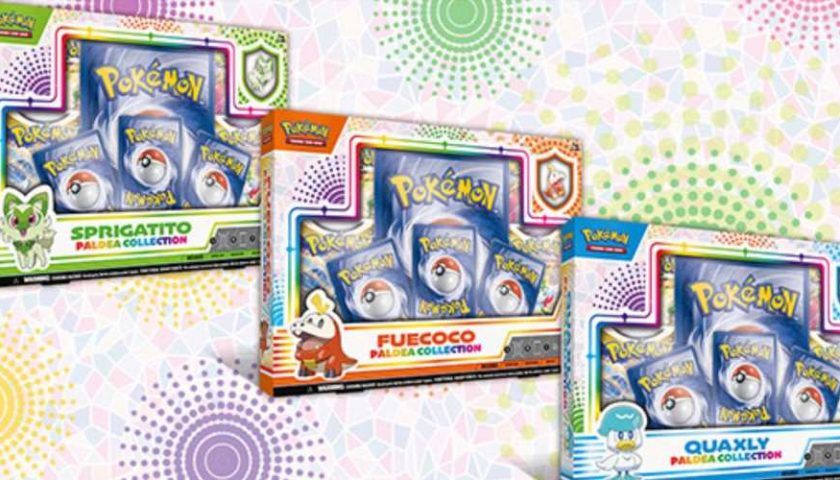 The ever-expanding world of the Pokemon TCG is, well, expanding once again. This time, the first products tied to the upcoming Pokemon Scarlet & Violet are making their way to the tabletop game. This new collection will bring several new cards and packs, as well as an enamel pin, to the wonderful world of Pokemon TCG.

The Paldea Collection is making its way to Pokemon TCG in January of 2023 and these new cards feature several exclusive Pokemon from the region featured in the upcoming open-world RPG Pokemon Scarlet & Violet. Three variants of the collection offers players the chance to grab one of the three starter Pokemon featured in the game: Sprigatito, Fuecoco, or Quaxly.

Alongside the special foil promo cards featuring all three starter 'mons, each collection also comes with a collector’s pin of whichever your favorite starter is. There is also a foil oversized card that will feature either Koraidon ex or Miraidon ex. You also get 4 Pokemon TCG booster packs in the collection, as well as a code card. This can be used in either the Pokemon TCG Online or Pokemon TCG Live.

While the collection is not released until early next year, this reveal is just in time to get folks excited for the release of Scarlet & Violet. The game is the first in the series to feature open-world play, meaning players can take their time to explore every nook and cranny of the Paldea region. Plus, it will feature a new breeding mechanic, as well as the possibility of new six and seven-star raids. The game lands on Nintendo Switch in just a few weeks on November 18.