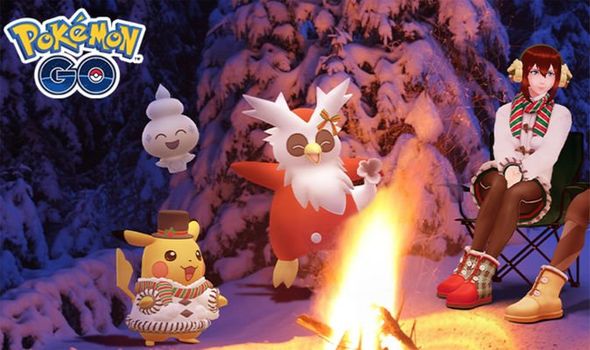 Pokemon Go developer Niantic has outlined its plans for Christmas 2020.

The annual Pokemon Go Christmas event has a December 22 release date on iOS and Android devices.

Running until end of play on December 31, the Pokemon Go Holiday event starts at 8am local time.

Needless to say, the event will primarily revolve around the appearance of Ice-type Pokemon.

This includes Spheal, Snover, and the debut of Vanillite in Pokemon Go. Seel, Swinub, Smoochum, Snorunt, Snover, and Vanillite will also hatch from 5km eggs.

Of course, it wouldn’t be a special event without some kind of costumed Pikachu, who will be joined by festive variants of Delibird, and Cubchoo.

If you enjoy doing the Field Research tasks, Niantic will launch some exclusive new missions that will reward fans with Vanillite and Cryogonal encounters.

Other festive bonuses will be available within the Pokemon Go Item Shop, where fans can purchase some cool Christmas collectibles.

This includes avatar items such as the Greedent Sweater, Whimsicott Earmuffs, Winter Boots, and the Winter Coat. This will be joined be limited edition item boxes.

Finally, Pokemon Go fans will be able to grab holiday-themed stickers from PokeStops. As Niantic points out, the stickers will only be available throughout the duration of the event, so don’t miss out.

Elsewhere, Niantic has announced plans to reward players with daily bonuses that will rotate in and out of play.

It all begins with the ability to open upwards of 45 gifts in a single day, and carry 40 at any one time. These particular bonuses will remain for the entire event.