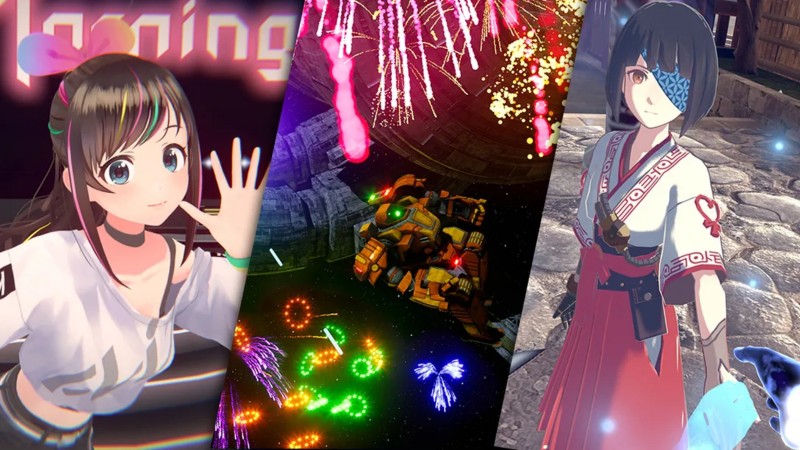 Other games announced include action game Altair Breaker, rhythm game Kizuna AI – Touch the Beat!, and more. We’ll break down what PlayStation has to say about each of these six new titles below.

Fantavision is a puzzle-rhythm game released on the PS2 in 2000 and it’s somewhat of a cult classic. The series has remained dormant since that original release, but developer Cosmo Machia Inc. is bringing it to this decade with a brand new sequel called Fantavision 202X.

“The game is an artistic combination of action, shooting, strategy, and puzzles,” the blog post reads. “The PS VR2 headset and PS VR2 Sense controller provides an immersive experience for you to fill the star-studded sky with sparkling fireworks.”

In Fantavision 202X, your goal is to catch at least three fireworks of the same color and shoot them into the night sky. You can can catch fireworks of different colors, too, by using Wild Fireworks and shooting them with Daisy Chain, which combines multiple colors. Collect items during your sessions to start the game’s bonus mode, Starmine. In PSVR2, you catch fireworks by aiming at them and pulling the Sense controller’s trigger. You then shoot the firework by pressing circle.

“In addition to the single-player mode, a replay mode is also available,” the PlayStation Blog post reads. “You can change the camera’s viewpoint for incredible replays, stop time to enjoy the show, add different effects, and more. You can also experience the vibrations of the fireworks through haptic feedback, so you can fully absorb the breathtaking fireworks display.”

“Multiplayer sword-fighting action comes to PS VR2 in the form of Altair Breaker,” the blog post reads. “The AI-created virtual world Altair was once a beautiful archipelago covered by a sea of clouds. Now, surrounded by its collapsed brethren, a single floating island remains. Atop its ruins roam experimental combat AI ruled over by a fully autonomous weapon Laws-Zero. Into this place of danger, you must journey and face these vicious creations up close.”

You can play the game with up to three other players as you glide through the air, climb walls across the island, battle with full 360-degree movement, perform aerial combos, use AOE attacks and special abilities, and more.

Last Labyrinth creator Amata K.K. is bringing a new co-op adventure to PSVR2 on February 22 called The Tale of Onogoro. In it, players are thrust into a unique parallel world where they must join forces with a shrine maiden on the island of Onogoro named Hal. Together, you must defeat the five giant Kami that inhabit Onogoro, and you’ll need to solve some puzzles in order to do so.

“While you hold the legendary Celestial Weapon, capable of manipulating objects and firing Ki once absorbed, some riddles can only be solved by Hal, some only by you,” the PlayStation Blog post reads. “Additionally, you share health with Hal, making it all the more important for both of you to avoid injury. In tough situations, though, you can hold hands with Hal to heal, so be sure not to miss Hal’s call for help.”

Kizuna AI – Touch the Beat! is a new rhythm game coming to PSVR2 from developer Gemdrops, Inc. It’s also coming to PSVR and its flatscreen mode allows PlayStation 5 and PlayStation 4 players to enjoy the game as well. In it, players will use the Sense controllers “like penlights to strike colored boxes in time with Kizuna AI’s on-stage performance, or use the View Mode to freely move around the stage.”

Gemdrops, Inc. says the team has a variety of DLC planned for after the game’s release like additional songs, costumes, a new singing-specific AI (Kizuna-chan), and #kzn-chan songs.

Dyschronia: Chronos Alternate is a VR investigation game from MyDearest Inc., the creators of Tokyo Chronos and Altdeus: Beyond Chronos on PSVR. Dyschronia takes place in the future in a maritime city named Astrum Close. Its crime rate is .001% thanks to “dreams,” which are able to prevent crimes somehow. However, the city’s founder, Professor Rumford, is murdered and Hal Scion must investigate the case to determine what happened and why it happened.

“The investigation will be conducted using Memory Dive, an ability that allows the player to access the past by touching objects with the left hand and reliving the owner’s memories,” the blog post reads. “The present can also be altered by interfering with the owner’s actions at the moment their fate diverges. A helpful ally who supports the investigation is Lily, the navigator robot, who is always with Hal and can provide unexpected clues.

“In addition to the scene of the crime, the investigation field also includes the beautiful Augmented Dreaming world that integrates people’s dreams, which can be seen when accessing the network. One of the key features of this game is that you can enjoy VR spaces with completely different atmospheres: the real world where the incident occurred and the world of Augmented Dreaming, where mental space is maintained. Investigate the two-faceted field and get to the bottom of the mysterious incident.”

The final game announced today is X8, a new 5v5 multiplayer tactical shooter coming to PSVR2. Each match plays out over multiple three-minute rounds where the attacking group must place and detonate explosives while the defending side attempts to stop them. Each hero in the game uses a distinct weapon and a trio of special abilities, activated with specific Sense controller gestures. More game modes are planned in the future of X8’s lifespan, and the game will support crossplay.

X8 does not yet have a release date but it will hit PSVR2 sometime in the future.

Are you excited to check out any of these PSVR2 games? Let us know in the comments below!