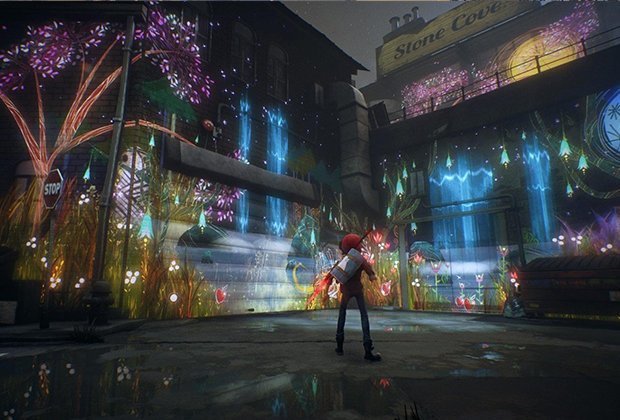 Concrete Genie is one of Sony’s most exciting first-party exclusives.

The game, developed by Pixelopus with guidance from the Sony Worldwide Studios banner, demonstrates the sort of special creativity that really suits Sony’s platform. It feels like a mix of all the best bits of Jet Set Radio Future, Okami, Ico and Sly Cooper rolled into one creative, inventive game.

As we’ve said in a previous preview – we love it.

But there’s one thing that caught our attention whilst we were playing. The painting elements in the game seemed to require you to use motion controls and the DualShock 4’s motion-tracking capabilities to throw your artistic Genie creations on the walls: you can hold down L2 and move your control to simulate the movement of a paintbrush – the more you move, the more you paint.

In an interview with creative director Dominic Robilliard (creative director at Pixelopus), he clarified that players would not be locked into using motion controls – and that Sony as a publisher is driving a huge push to ensure as many games as possible are accessible to gamers of all levels of mobility.

“You can play the entire game with the right stick,” explains Robilliard when we quiz him about the use of motion controls in the game.

“You don’t have to use the motion-tracking elements and the DualShock 4’s sensors. When we took this title to E3 last year, we were blown away by the response to the game, but there was a discussion that started manifesting about accessibility and people that may not have the dexterity to play the game how we originally built it.

“But E3 last year was an important time for us to realise there are multiple dimensions to accessibility, and I promised on the stop to add right-stick controls for players that may be unable to use the motion-sensing capabilities.”

We chatted for a little while about how accessibility in the industry is coming a long way (Microsoft’s Adaptive Controller, for example, is a huge shift in the right direction) but that there’s still quite a lot of work to do in including gamers of all physical mobility.

“There’s so much to do regarding in-game accessibility, but there’s a massive movement internally within Sony to address that, and I think Naughty Dog is ‘best in class’ when it comes to [working on the issue],” Robilliard notes.

“Next time around, [with our next game], I’m looking forward to integrating [accesibility options] from the very beginning and seeing how much more we can push that element of our design.”

That’s good news for gamers with physical disabilities – and it means games in the coming generations may be the most accessible, and available to more people than ever before.