Steam is the only platform to currently have a placeholder page for Retro Machina, so wishlist away. While you’re there, check out the current Super.com publisher sale to get into its other games, such as Zelter, Broken Lines, Alchemist Adventure, and the recently released Raji: An Ancient Epic.

Retro Machina is billed as a “retro-futuristic action-puzzle adventure” according to the official press release, where you’re placed in the stylish metal skin of a robot who has been banished from Endeavour City. The city is the only city remaining on Earth, protected by a glass dome, and where now exists only robots, who take daily precision care to keep the dome in place. When you begin to malfunction, you are cast out of the city before you cause any damage to the carefully-tended-to infrastructure. You then begin your journey to find a way to repair yourself so you can one day return to the safety of your home.

Retro Machina features a world where humans ceased to exist long ago, and robots are the main lifeform now. You’re just a low-grade worker bot, but you do have the ability to hack and control other robots. This skill will come in very handy to take on and overcome numerous challenges on your journey, such as fighting, exploring, puzzle-solving, and even just as the occasional companion. The gameplay trailer also shows your little robot wielding weapons during a couple of combat scenes, and also using a jetpack to move quickly and to leap over distance. Whether or not you start off with these skills is unclear, but they seem as if they’re item goals to reach later in the game.

The visuals are more than compelling at first glance, with the retro-futuristic look of the hand-drawn graphics definitely eye-catching. You’ll explore four diverse biomes in Retro Machina, with each being artistically inspired by futurist Jacque Fresco, as well as by science fiction authors Isaac Asimov and Arthur C. Clarke. 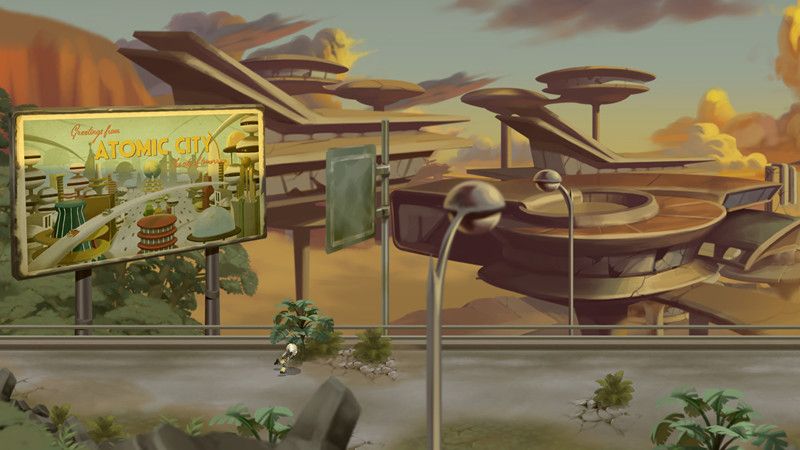