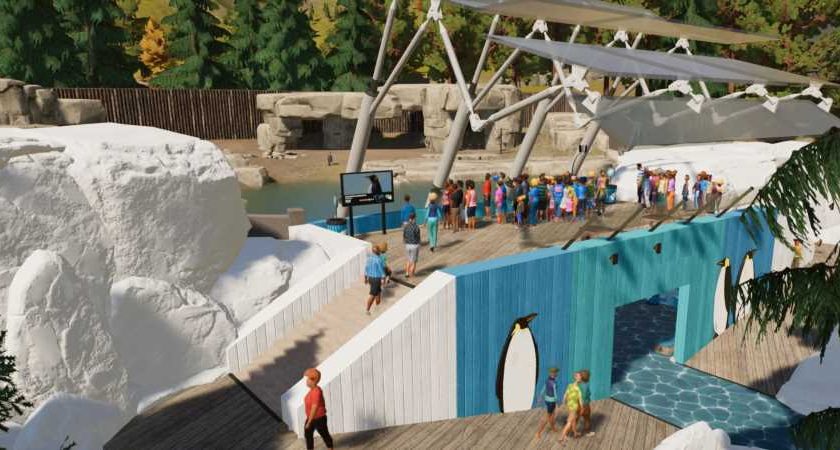 In Planet Zoo making a profit is essential but that doesn’t mean you have to compromise on animal welfare. It’s possible to maintain good standards of care while still bringing in the donations. In fact, high animal welfare will increase your zoo’s reputation and in turn, its visitor count.

Making sure your animals are well cared for on a small budget can be very difficult but it is manageable. Here are a few tips to get the most from your money and start turning a profit while still maintaining high standards and stopping those animal rights protestors in their tracks. 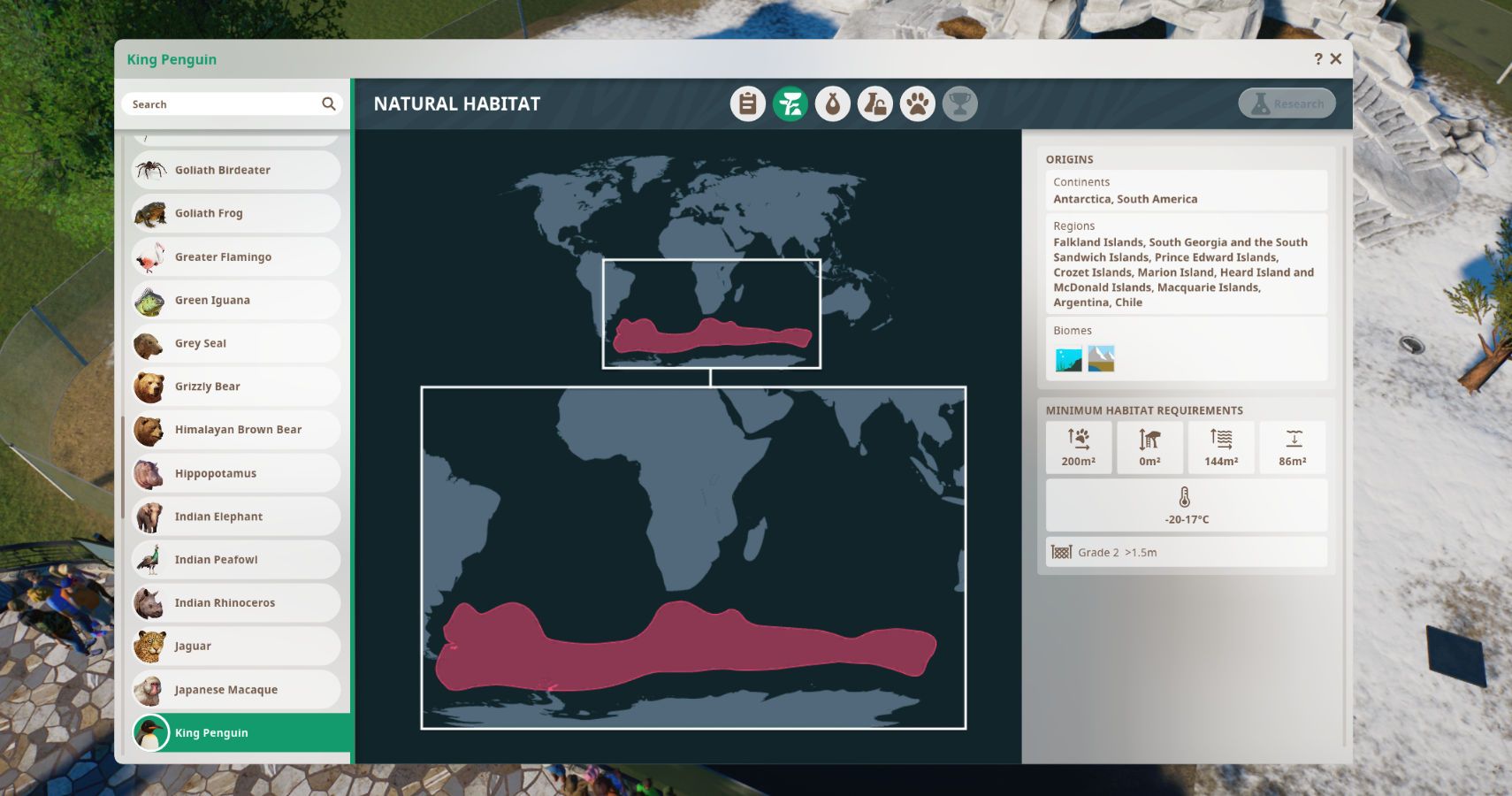 If you’re short on cash then a great first step is to head over to the Zoopedia before you make any purchases. Some animals will require huge amounts of space, while others will need extreme temperatures that have to be maintained with heaters or coolers, depending on your zoo’s climate. Certain species also have requirements for climbable or swimmable space.

If you look up different animals you can see the space, biome, and temperature requirements for them. This can help you work out how expensive an optimal exhibit will be to produce. It’s also worth bearing in mind that creating climbing space can be a nightmare if you don’t have any climbing blueprints unlocked. Sometimes trees will count, for instance, the bare trees suitable for Red Panda exhibits, but mostly you’ll need to build platforms and that can be very fiddly. Using a mechanic to unlock the first set of blueprints through research is advisable early on for this reason. 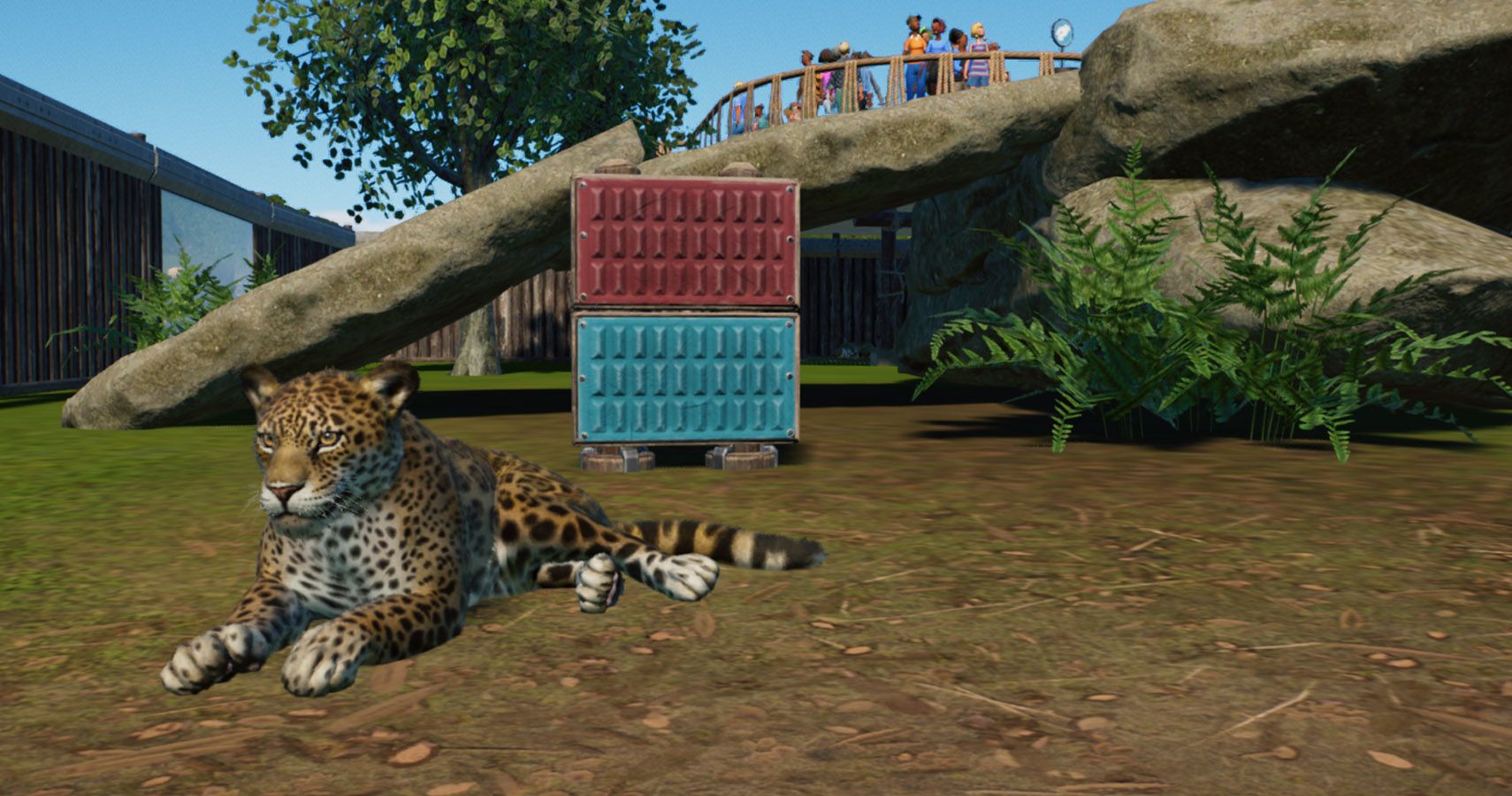 While some animals are very cheap to keep happy if they aren’t appealing they won’t draw in the visitors and earn you those top donations. For this reason, it’s a good idea to look at the most appealing animals you have access to and work out which you can build habitats for most easily. Exhibit animals can also help here since they can be very appealing and the costs of keeping them are small.

Red Pandas are a fantastic crowd puller that is manageable early on as they don’t require as much investment in their habitat as some other appealing species. Snakes are often the most appealing exhibit animal type and you can keep them either alone or in pairs.

Whichever animals you choose, make sure that you place donation tubs in the places you see visitors gathering to admire them. Adding educational screens and speakers can also encourage visitors to stay longer and become more likely to throw some money in the tub. 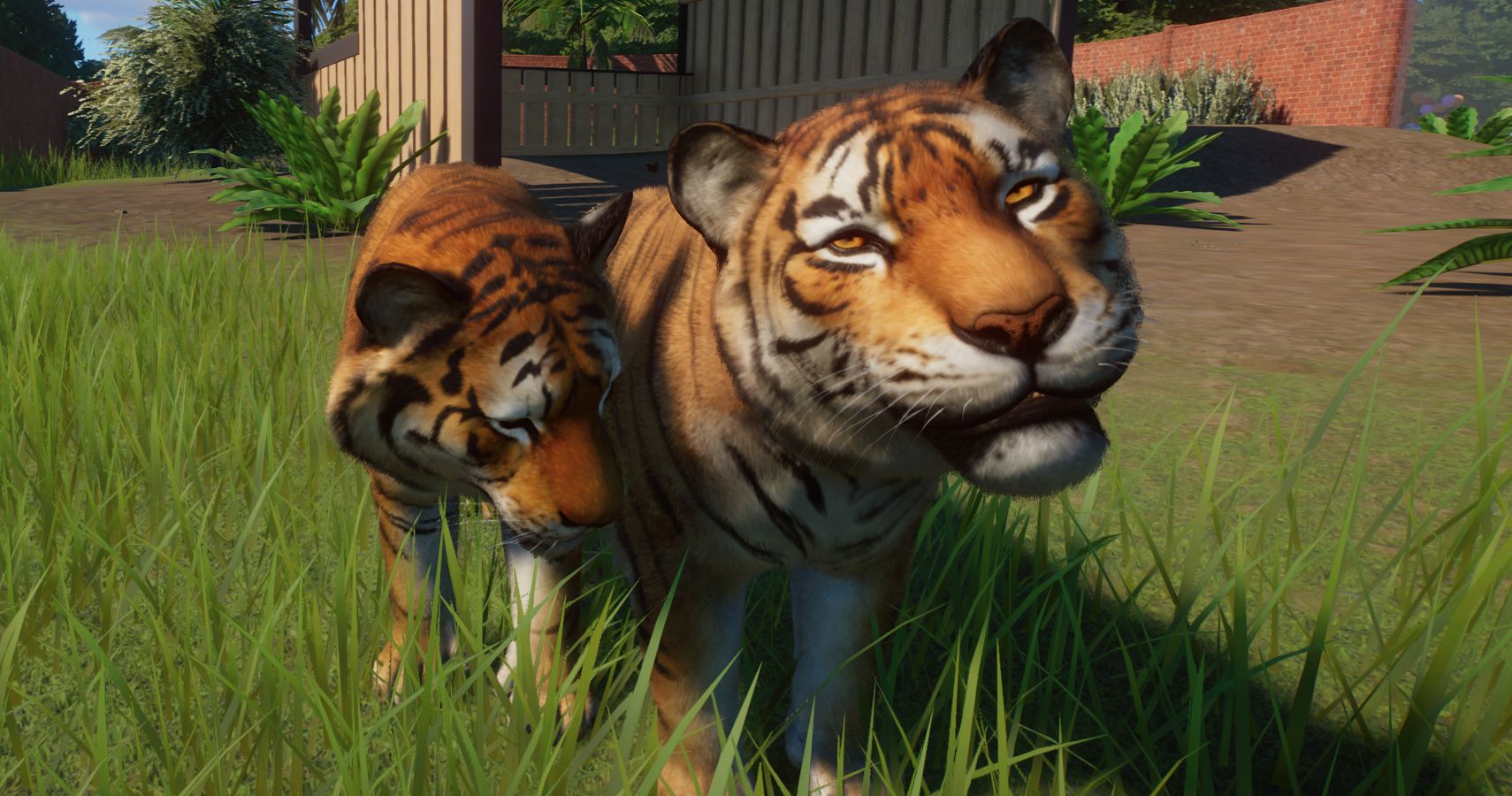 Ok, this sounds harsh but hear us out. Overcrowded exhibits are bad for animals so you do need to keep an eye on the numbers. You also need to watch out for inbreeding, although this will usually generate an alert so you can stop it.

Certain animals will breed frequently and selling or releasing their young into the wild will earn you enough money or conservation credits to purchase more animals and expand your zoo and in turn your profit.

Japanese Macaques are cheap crowd-pleasers that breed well and mature quickly. Flamingos are similar but can be overwhelming since they breed very fast and like to live in large groups. For those happy to wait, Nile Monitors take a while to age but earn a large number of conservation points once released. Cheetahs are also a good investment being cheap to feed and producing up to five cubs per birth.

In terms of exhibit animals, small creatures such as spiders and beetles often breed frequently. You’ll need to keep an eye on them though, as their numbers increase fast and can overcrowd an exhibit quickly. They won’t sell for much but you will have a frequent supply of excess insects. 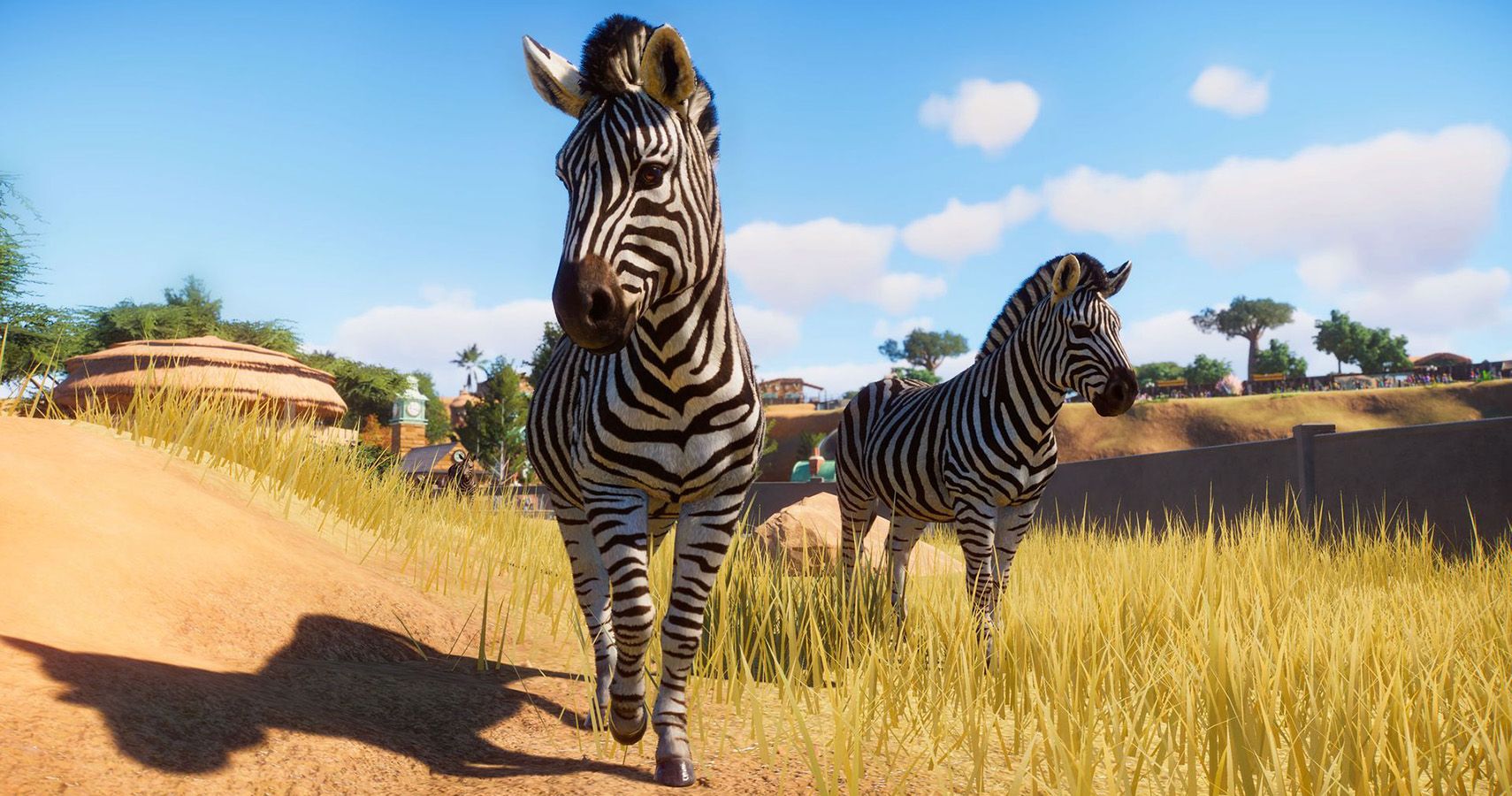 Certain species can live in groups with others. This is a great way to increase the number of habitat animals without having to build new enclosures. Zebras or Common Warthogs are especially good for this as they can live with each other as well as several other species including Springboks, Sable Antelopes, and Reticulated Giraffes.

Just make sure you check on the animal’s welfare as sometimes just because you can, doesn’t mean you should. For example, while Ostrichs can also live with Zebras, the speed at which they run around an enclosure can stress out other animals. You’ll also need to keep expanding the space as the number of animals increases, especially if you add Giraffes, as these have a huge space requirement. 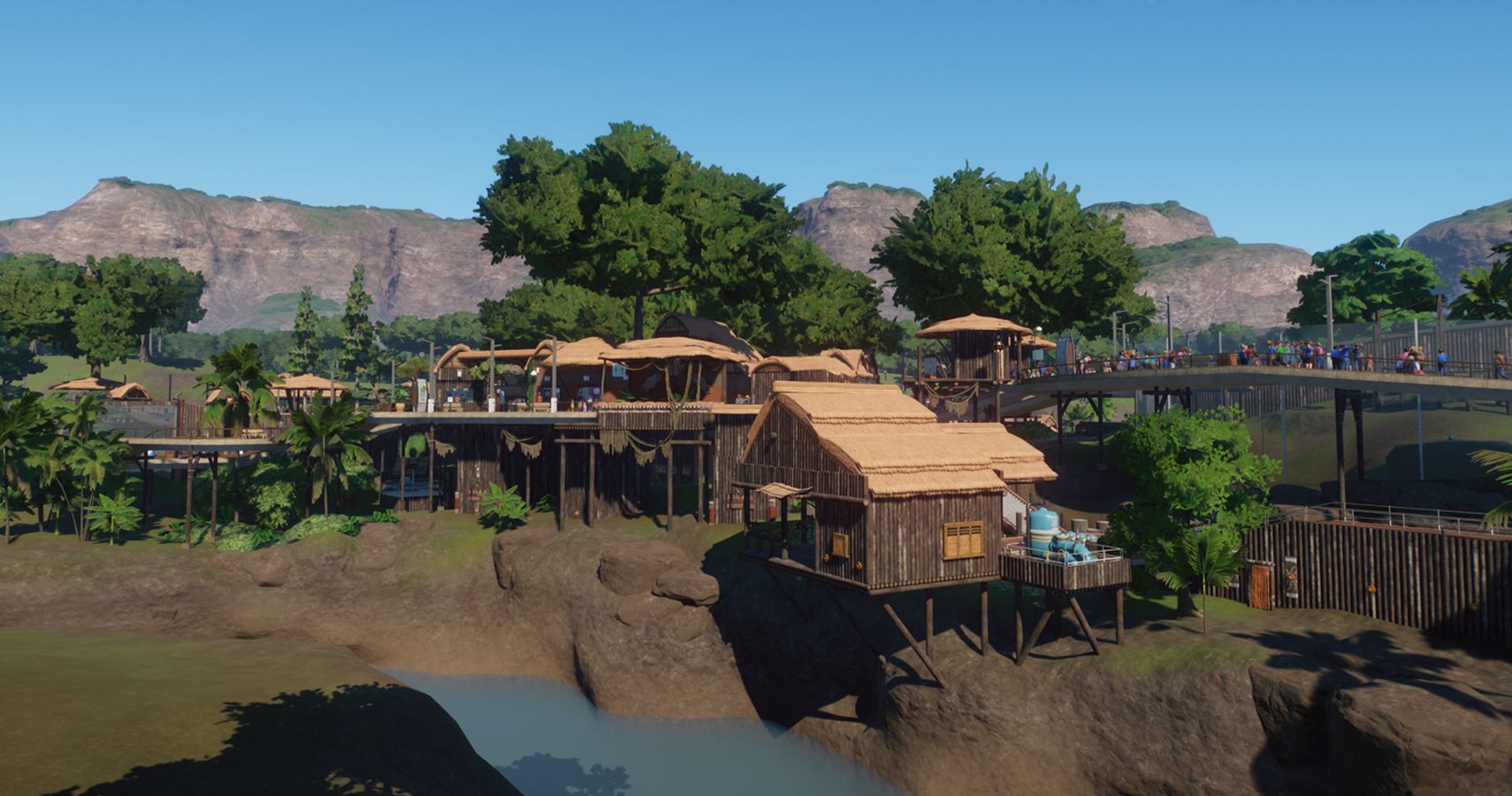 You can use the terrain to make more natural enclosures and in some cases, it can be used in place of fencing. Large cliffs or rivers with steep banks can help keep animals where you need them to be, without needing to fully enclose them with a fence. You can also make caves to act as a shelter, which is especially handy with larger herds as it can save space and money.

All you need to do is complete your fencing with the null barrier, which has no cost, and make sure the edges are just outside of where the animals can get to. This will ensure that the terrain overlay will show you accurately where any escape points are.

To ensure visitors can still see you can build viewing platforms over the terrain, allowing them to look down into the enclosure. Just make sure you have some space where you can place a fence on flat ground, in order to add a door for the keepers to enter the enclosure. 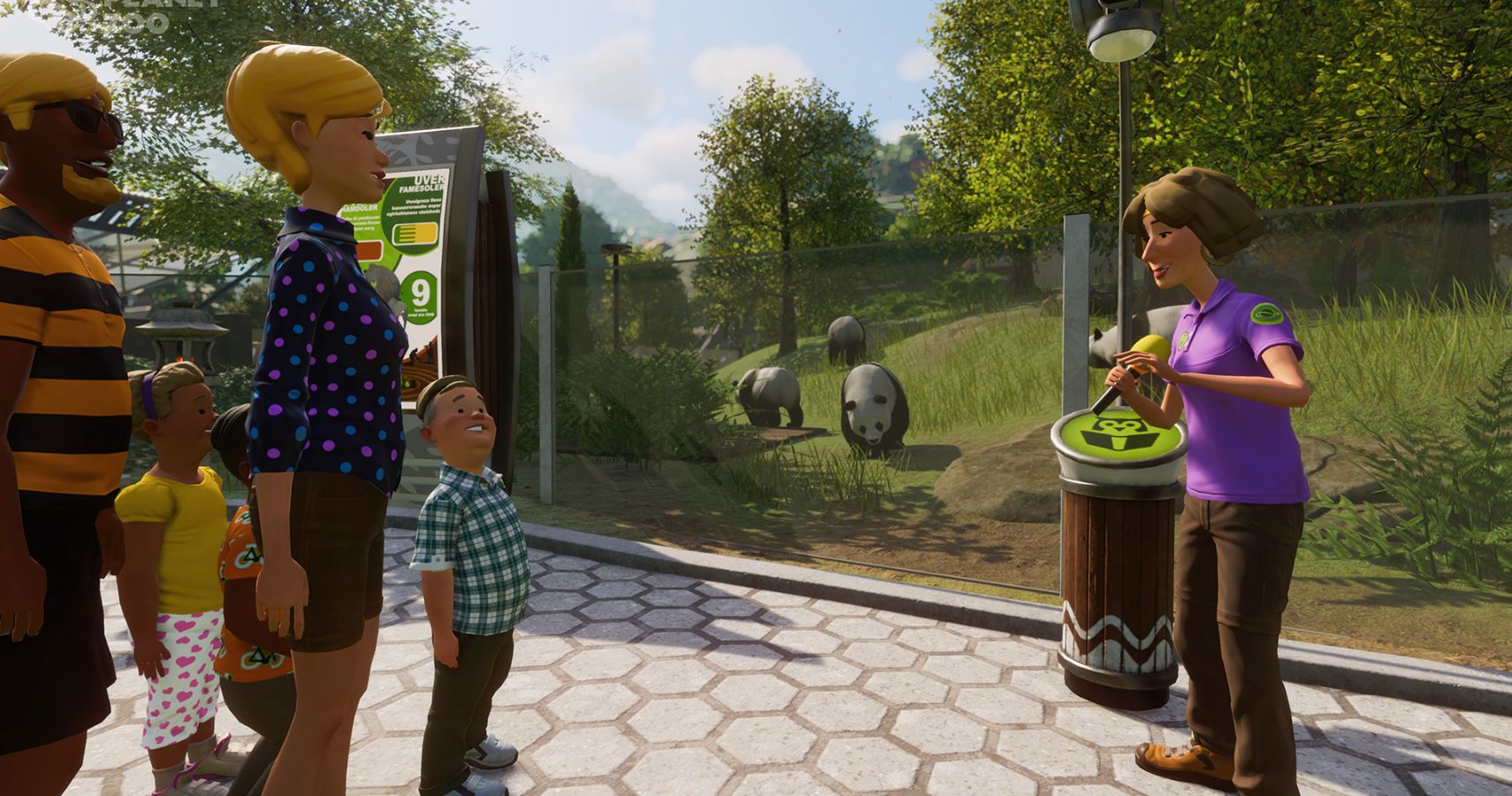 Happy animals will encourage visitors but there are other things you can do to ensure your visitors stick around and spend more time and money at your zoo. The main one is to make sure their needs are met. This means providing food, drink, and restrooms. These things are usually profitable by themselves but when you start out using vending machines instead of shops to avoid the vendor staffing cost can be beneficial. Vending machines are also great for lesser-visited areas of the zoo to ensure needs can still be maintained even further away from the main hub.

Education is another crowd puller and adding screens and speakers will encourage visitors. Hosting animal talks will also attract crowds, especially to exhibits that have a high appeal and where the educators are able to feed the animals during the talk. Make sure that these facilities have donation tubs close by so visitors can show their appreciation with cash.

Well placed ATMS will ensure visitors can spend more and donation tubs situated on the exit path can also be surprisingly lucrative. To check you’ve got donation tubs in the right place click on them regularly to see how much has gone into them.

It’s also beneficial to guide your visitors. Adding viewing platforms or small sections where animals are visible through fences can help ensure that donation tubs are placed where people are gathering. Making some of the fences non-transparent will also increase animal welfare and reduce stress. Just make sure that the viewing areas do offer good views. Zoo patrons will be quick to tell you if they don’t, so keep an eye on guest thoughts. 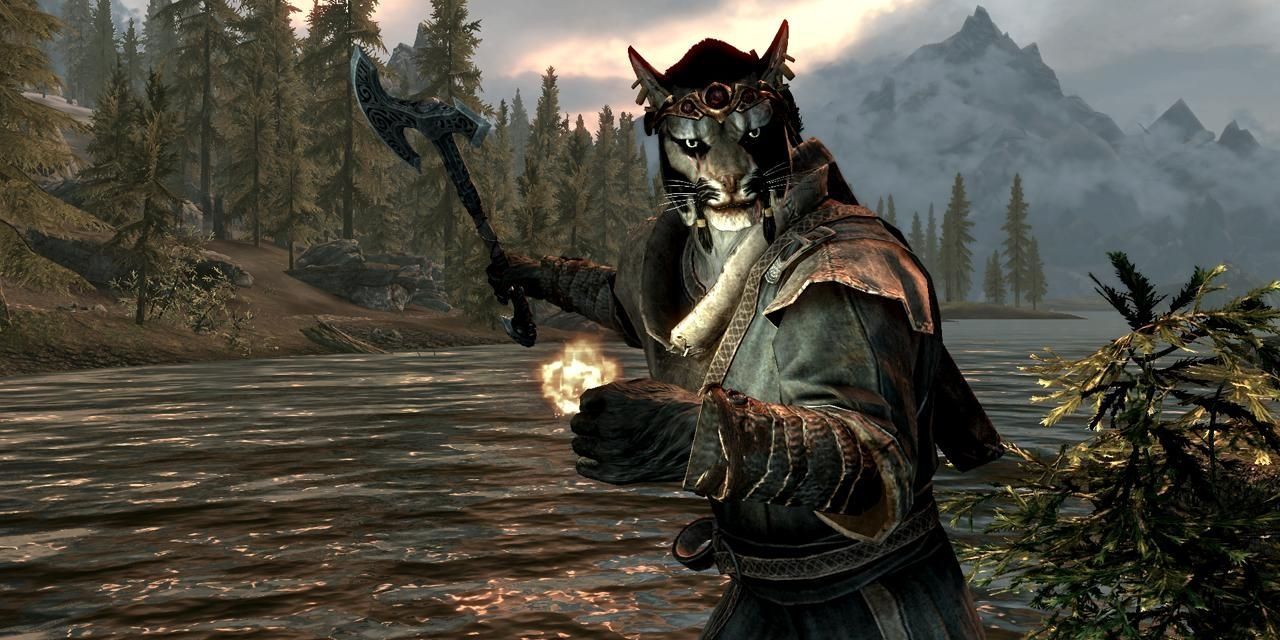