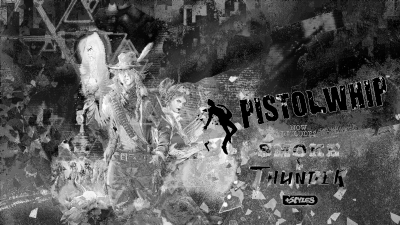 Cloudhead Games’ Pistol Whip is adding its Smoke & Thunder campaign on August 12th alongside a complete overhaul of its modifiers system.

The new “Styles” system included with the update is meant to unlock endless replayability, from playful dance modes to ultra hardcore bullet hells. There’s even John Wick’s lethal pencil in the new update. Cloudhead’s developers joined us earlier this summer for an exclusive preview of the new system which you can check out in the video below.

The new version of the game will release on Oculus Quest, PCVR, and PlayStation VR headsets on August 12. After nearly two years of near-constant free updates, the developers are increasing the price of Pistol Whip to $29.99 (from $24.99) starting on August 15. Last month, Aldin Dynamics did something similar with its Natural Magic update for Waltz of the Wizard. The higher prices reflect developer’s hopes to expand the scope of their products and draw in additional buyers as VR brings in new players, while also grandfathering in existing game owners with new content.

Smoke & Thunder is a western-themed campaign with new weapons and mechanics as well as a new boss fight. Cloudhead launched its first campaign, the sci-fi-themed 2089, late last year. The new campaign includes tracks from The Heavy, Black Fire, Bones UK, Devora, alongside a “never-before-heard” song from Magic Sword, according to the developers. The mode also includes new voice talent, with sisters Jessie and Tess voiced by Victoria Hogan (Kingdom Come: Deliverance) and Avalon Penrose (Hades). Players who have beaten the campaign can combine any scene they want with any weapon and a long list of modifiers.

We’re excited to give Smoke & Thunder a try and know there are a lot of fans out there who are ready for a reason to jump back into Pistol Whip. Is the new “Styles” system going to bring you back? Let us know in the comments below and check back with UploadVR.com soon for more updates.