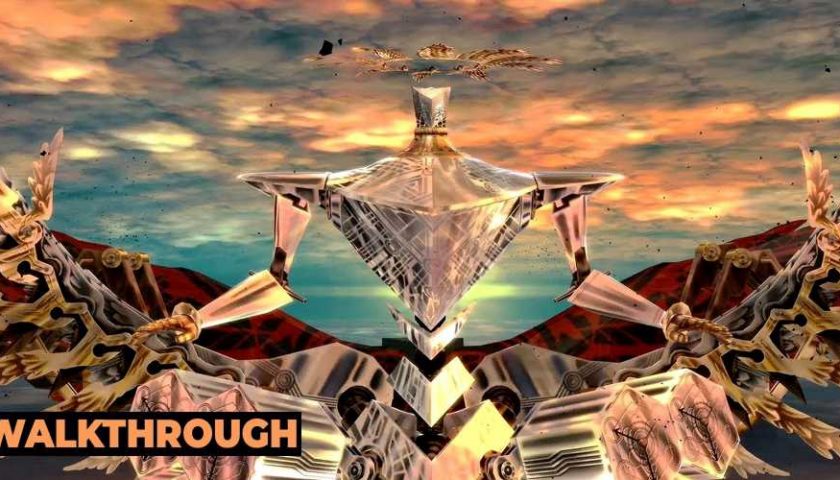 At long last, after dozens and dozens of hours in Persona 5 Royal, you’re ready to take on the final boss (well, of the basic story, that is – there’s a bit more content in Royal if you played it carefully). The God of Control, Yaldabaoth, has been behind the cognition switches happening in Tokyo, and it’s up to Joker and the team to put a stop to him once and for all.

This epic battle against a towering god is intimidating and long, but with enough careful planning, strategic moves, and ample healing, we'll help you take down Yaldabaoth for good. 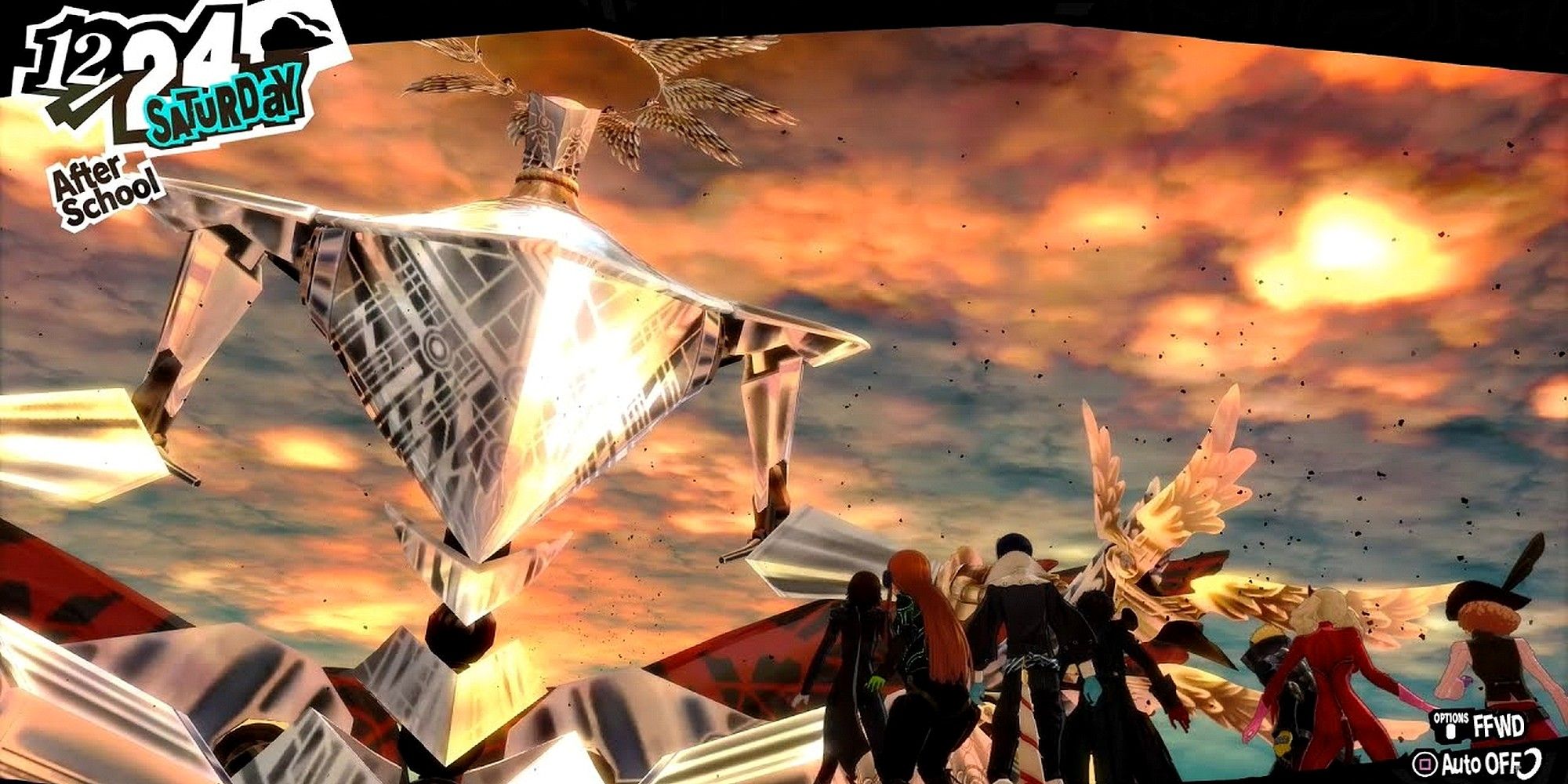 While we’d normally kick off a boss fight guide with suggestions for your party setup and affinities, there’s no use here – the fight against Yaldabaoth begins immediately after you beat Holy Grail. This means that there’s no chance to swap out your party members without the help of special abilities given by Confidants you maxed out during your gameplay.

After you defeat Holy Grail, it emerges from the ground to show you that you’ve underestimated its power – Holy Grail was simply the head of Yaldabaoth. Now, he’s emerged and is ready to take you on in his massively imposing, towering robo-angel form. He’s got four arms, each holding a different item: a book, a sword, a gun, and a bell. You’ll be up against each one and its unique twists to the fight, so stay on your toes.

Any status ailments inflicted by the arms cannot be healed like normal. The recipient must simply ride out the effect duration. 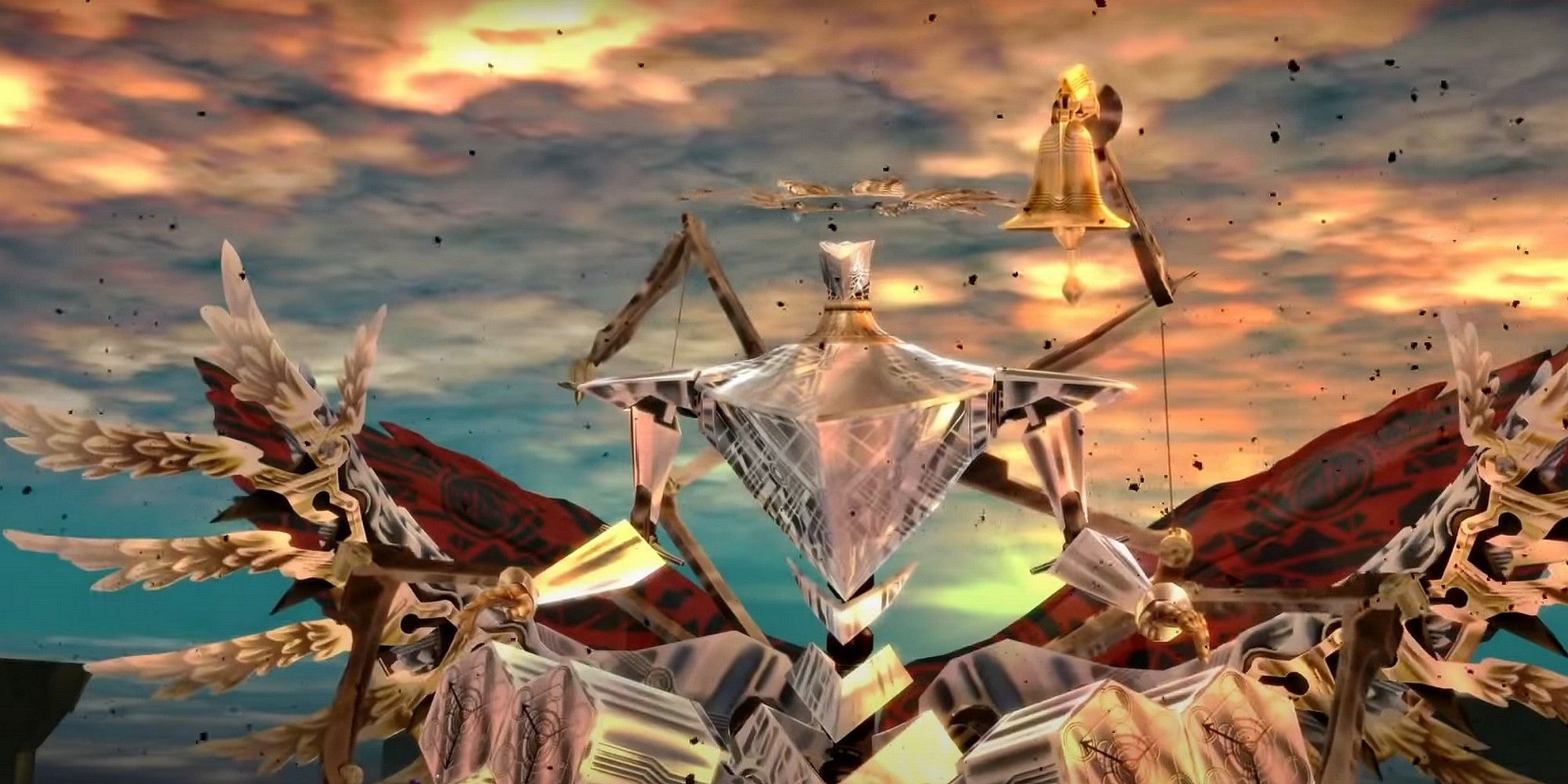 Once you’ve taken out enough of his HP, Yaldabaoth gets serious and starts really fighting back by bringing forward the arms that hold tools of destruction. Each arm has different affinities, which we’ll detail for you below.

Keep these affinities in mind when using multi-target magic attacks. Magic that hits multiple targets will hit all arms that are currently engaged in battle as well as Yaldabaoth's body. Therefore, if there's an arm out that repels the type of magic you're trying to use for your multi-target attack, make sure the attacking Thief won't be damaged by the repelled move.

Phantom Thieves whose confidant rankings are maxed out receive evolved Personas that are impervious to their elemental magic, so these Thieves may be your strongest choice in this fight To use Ann for example, while Carmen, her primary Persona, resists fire magic, Hecate, its second form, completely blocks fire magic. Use these sweet negations to your advantage when choosing elements to use for attacking!

You may notice that neither Yaldabaoth nor his arms resist bless or curse attacks. Any multi-target attacks of these affinities can safely be used against all targets, keeping in mind that insta-kills will not occur against Yaldabaoth. 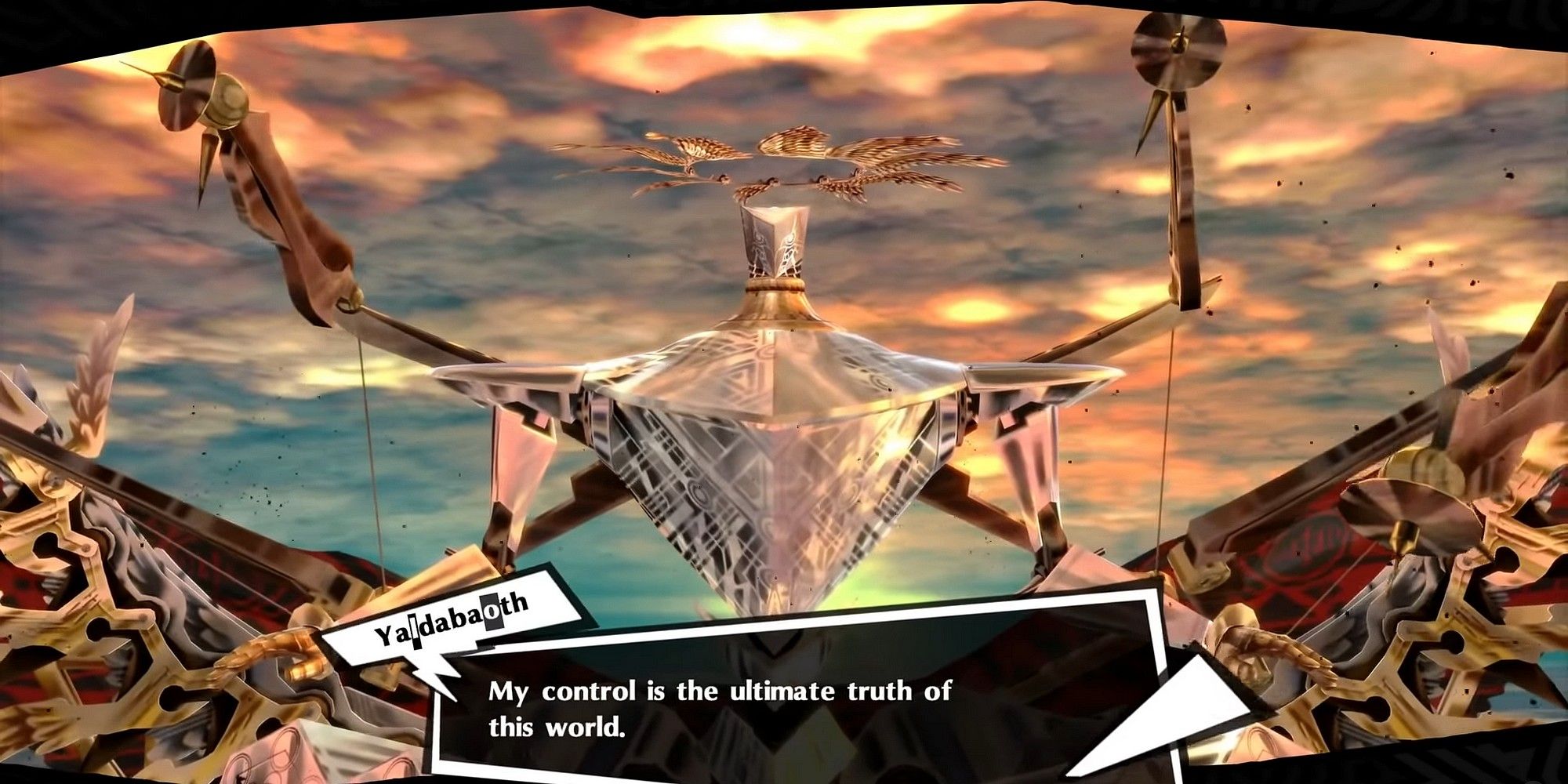 At first, Yaldabaoth will be dealing damage with only Arrow of Light, so keep pressing on and dealing as much damage back as you can. Once his HP has gone down enough, he’ll begin getting his four arms involved.

The most critical thing to keep in mind for this fight is to not let Yaldabaoth fight you with more than one arm at a time if you can. Each tool has different affinities, as you can see above, so trying to deal with two at once will do nothing but complicate things for you.

While an arm is extended, Yaldabaoth can perform up to five actions in a single turn. You may find yourself healing more often than anticipated but do so liberally to keep everyone alive.

After you've gotten Yaldabaoth's main body down to a certain percentage of health, the arms will begin using different skills. We listed them already in the table above, but starting now, The Gun of Execution will use Distorted Avarice, The Bell of Declaration can use Distorted Envy, and The Book of Commandments uses Distorted Pride. The rollout of these attacks means the fight has hit the next benchmark, and you're in phase two. 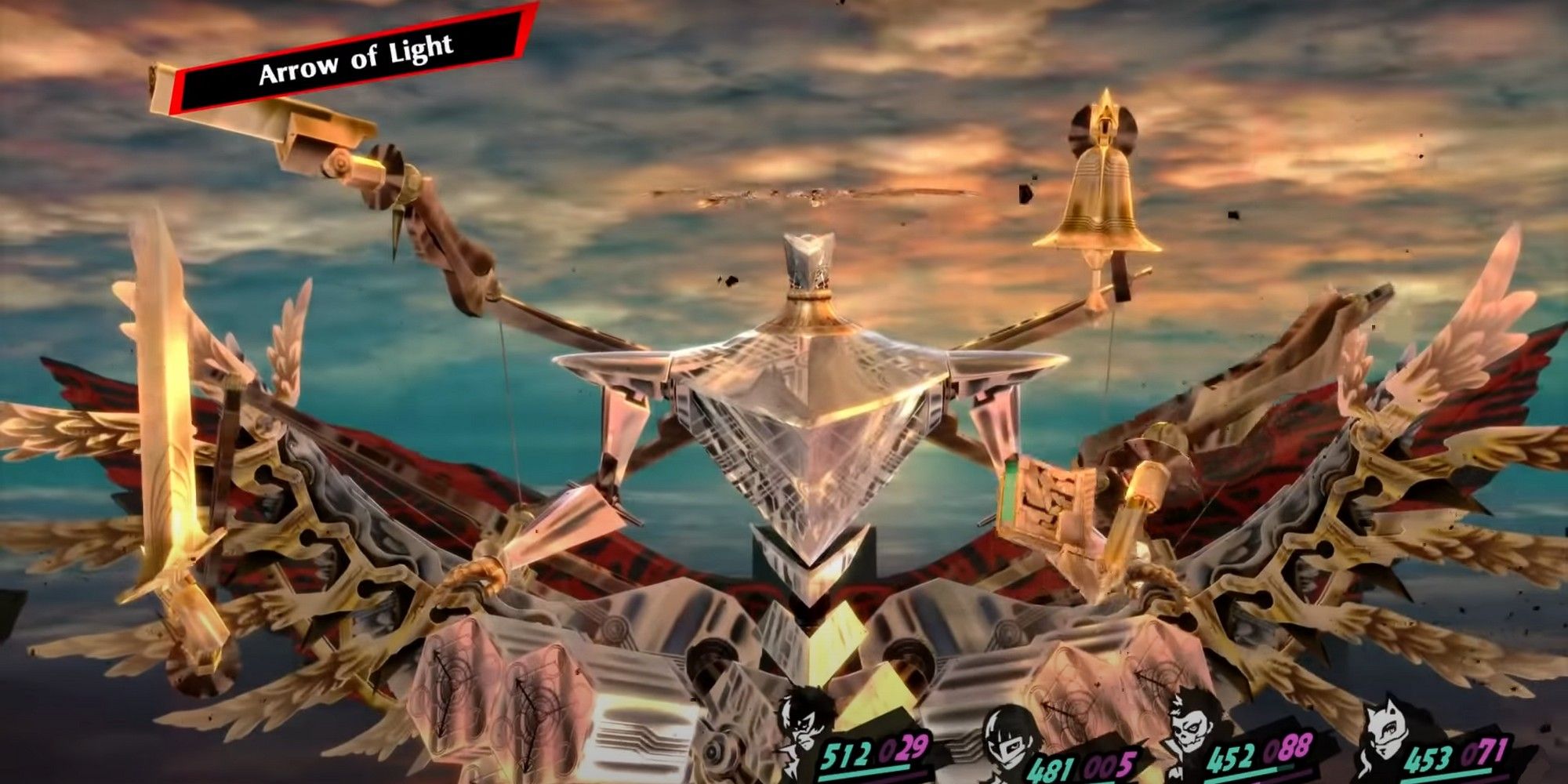 Once Yaldabaoth hits a third of the HP he had on his main body when the new Distorted attacks began from his arms, Yaldabaoth revives any defeated arms and restores all four to their full HP.

Still, though, Yaldabaoth himself remains your main target. As we advised in other fights where your foe can bring back the parts of itself you already defeated, immediately take out the revived arm while it's at lower health to save yourself the headache so you can keep pummeling Yaldabaoth himself.

However, once the arms are back, Yaldabaoth is also capable of using an attack we listed already that's new to this phase of the fight: Divine Apex, which is your official warning that his huge attack, Rays of Control, is coming. The bad news here is that the more arms Yaldabaoth currently has in the fight, the more powerful Rays of Control will be when it hits.

You have two options for how to deal with this incoming attack. With Rays of Control dealing extreme almighty damage, take out the last of Yaldabaoth's HP now if you can, as it obviously can't attack if it's defeated first. If you're not confident that you can finish the fight before the attack, defeat as many arms as you can to lower how hard Rays of Control will hit and try to guard against it to minimize damage taken.

This process continues and Yaldabaoth will go back to Divine Apex immediately after Rays of Control hits the first time, so wail on Yaldabaoth until he goes down and kicks off a cutscene. 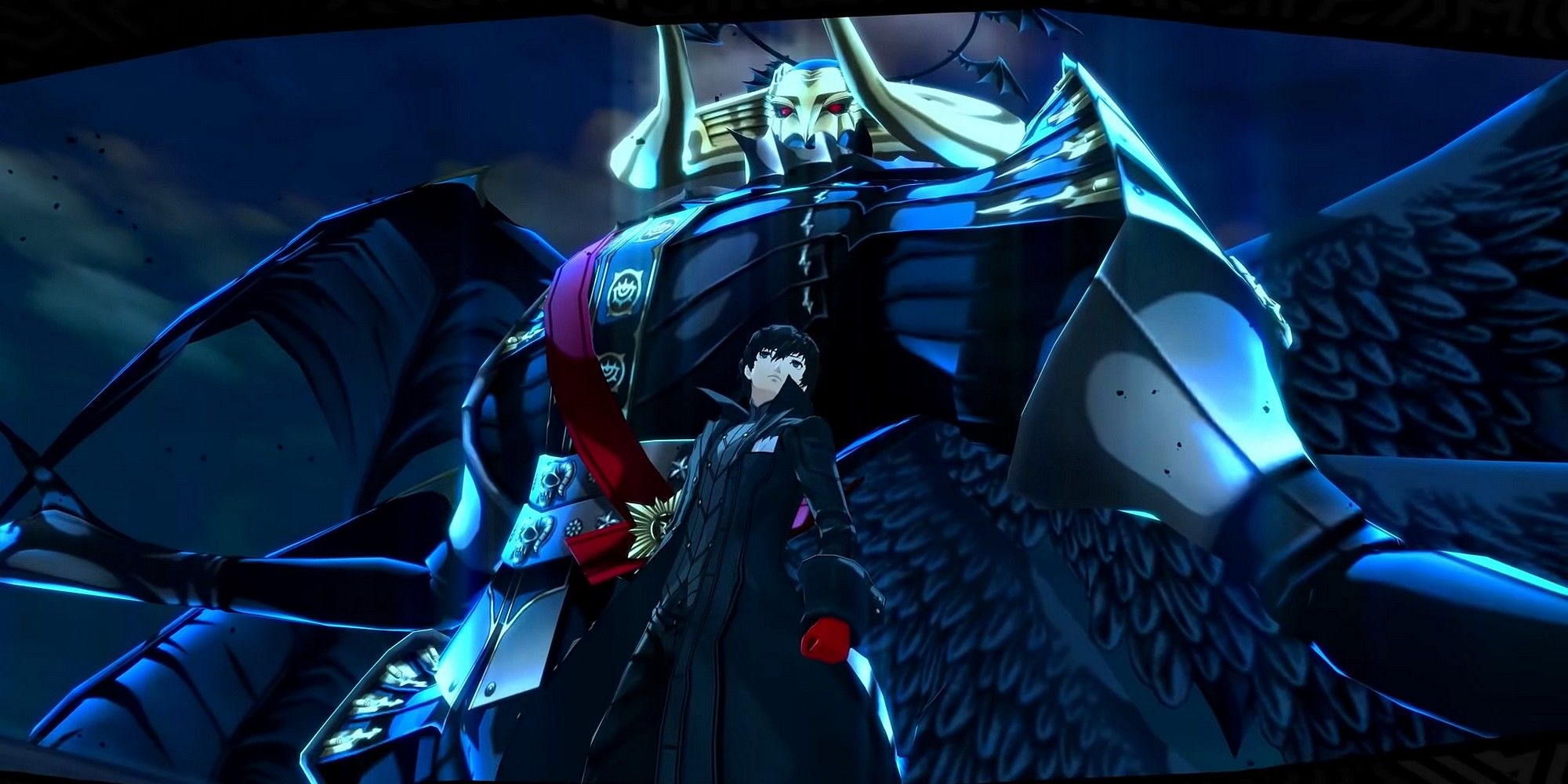 You've heard Yaldabaoth expressing how and why he feels humanity and their will is his to do with as he pleases, and you've seen him attacking you with the Seven Deadly Sins, too. All of this has been your buildup to the epic finale of the fight.

During the cutscene, the people of Tokyo begin to wake up to what's happening around them, horrified to realize that they hadn't remembered the Phantom Thieves and what they can do. With Mishima's encouragement, the people of Japan begin to cheer on the Phantom Thieves again, and the meter for the PhanSite asking if you're real will fill all the way, as everyone cheers you on.

Thanks to the masses turning against the God of Control and breaking free from the spell on them, Joker is able to continue the fight.

With the full faith of the country behind him, Joker can unchain Arsene and manifest him into Satanael, the massively imposing colossal Persona of the demon lord capable of standing up to Yaldabaoth.

Satanael only has one attack, but it's all you'll need to finish the fight. When you take control of Joker again, simply select Sinful Shell to hit Yaldabaoth with the full weight of the Seven Deadly Sins and wrest control of the masses away from him once and for all.

From there, enjoy the long cinematic and then carry on into the Third Semester, if you've met the conditions for it!