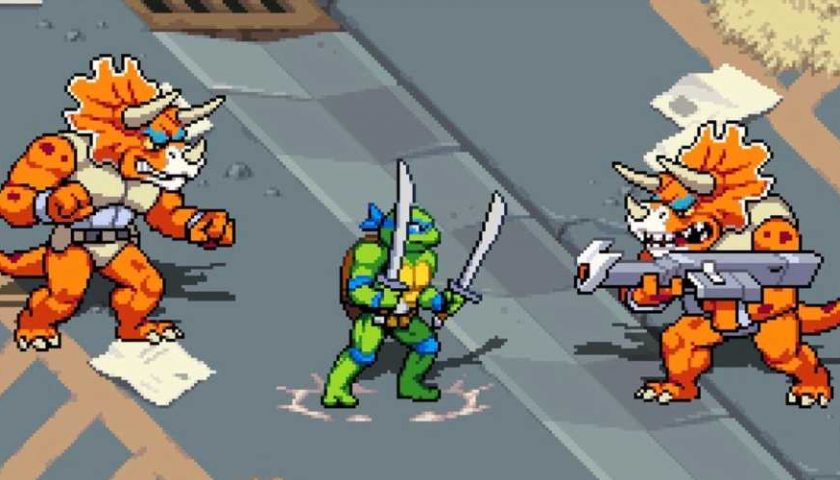 Teenage Mutant Ninja Turtles: Shredder's Revenge is stuffed to whatever the turtle equivalent of gills is (lungs?) with enemies eager to stomp on our half-shelled heroes. But above all others, the meanest are almost certainly the orange Triceratons.

Now, I'm not a TMNT lore hound, so I wasn't familiar with the Triceratons before I began playing Shredder's Revenge over the weekend. But, with a cursory skim through their Fandom page, I've learned that these bipedal triceratopses breathe nitrogen and get "sick" and "delusional" if they take in any oxygen. That's pretty badass and I have no choice but to stan — theoretically. In practice, these oxygen haters are the meanest bastards I've encountered so far in Shredder's Revenge and I get annoyed whenever they appear on screen.

They first show up in the Natural History Museum in "Dinosaur Stampede!," the game's eleventh level. As you stroll by a display, a pair of Triceratons stand still, pretending to be part of the exhibit, then jump down and start wailing on you. Another waits further down, hidden behind a triceratops standee. Later on, one jumps through a painting! From the Fandom wiki's assessment that they become delusional when exposed to oxygen, you might expect these Triceratons — who are not equipped with any kind of mask, hose, or tank to get that sweet, sweet colorless, odorless element into their lungs — to swing recklessly and charge randomly. But, the trickery they display in this level flies in the face of that hypothesis. The Triceratons are clearly thinking ahead, lying in wait, and formulating plans for how to strategically rout our heroes in a half shell. Despite being aliens from the Dimension X, these fearsome lizards clearly understand how museum displays work on Earth and are exploiting that to their advantage. 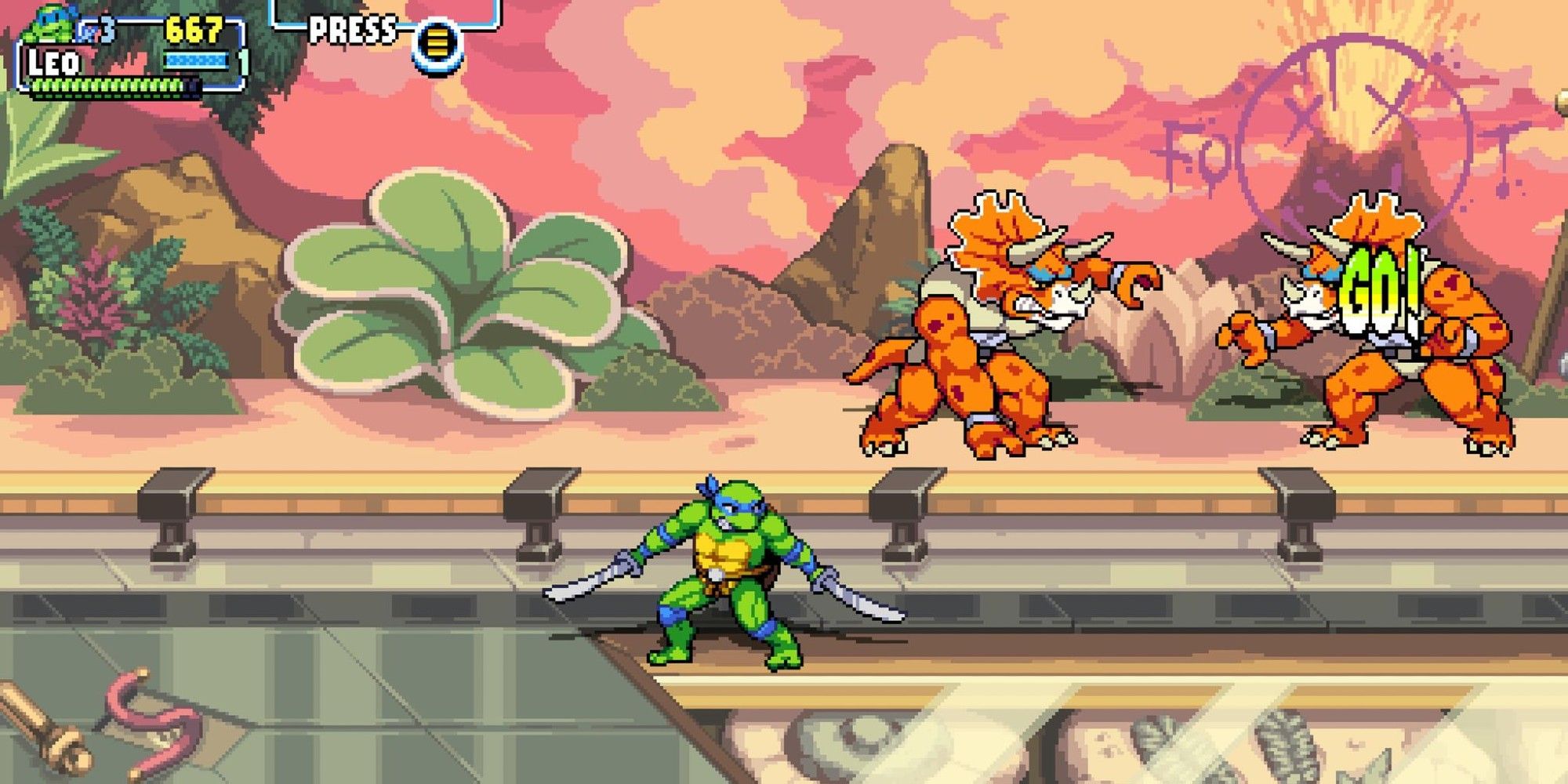 Orange Triceratons are a lethal mix of brute force, considered strategy, and pointy heads. They often stampede into the stage and will knock you down if you get in their way. If you get close, they'll reach out and hit you with one of their meaty paws. Stand too far away and they'll whip out a laser and start blasting. Try to slam down on them from above and you'll stub your turtle toes on their battle-sharpened horns. Most of the other enemies in the game have one or two attacks that they'll cycle through and you can typically tell how they'll fight just by looking at them. If a ninja has a flail that they're whipping around, you know to stand back until they finish swinging it.

But, orange Triceratons are unpredictable. They charge on screen, will start charging you mid-fight if you get too far away, and somehow manage to hide a gun on their person that only becomes visible when they whip it out to shoot energy blasts at you. With their expansive range of attacks, orange Triceratons most remind me of the Marauder from Doom Eternal. That enemy — which started as a boss before getting mixed in with the everyday enemies — could blast the Doom Slayer with a shotgun, hit him with a sword, and send energy dogs after him if he got too far away. Plus, it was impossible to injure him unless you shot him at exactly the right moment when their eyes flashed white, briefly staggering them. The Marauder required your full concentration which is easier said than done during Doom Eternal's frantic battles. 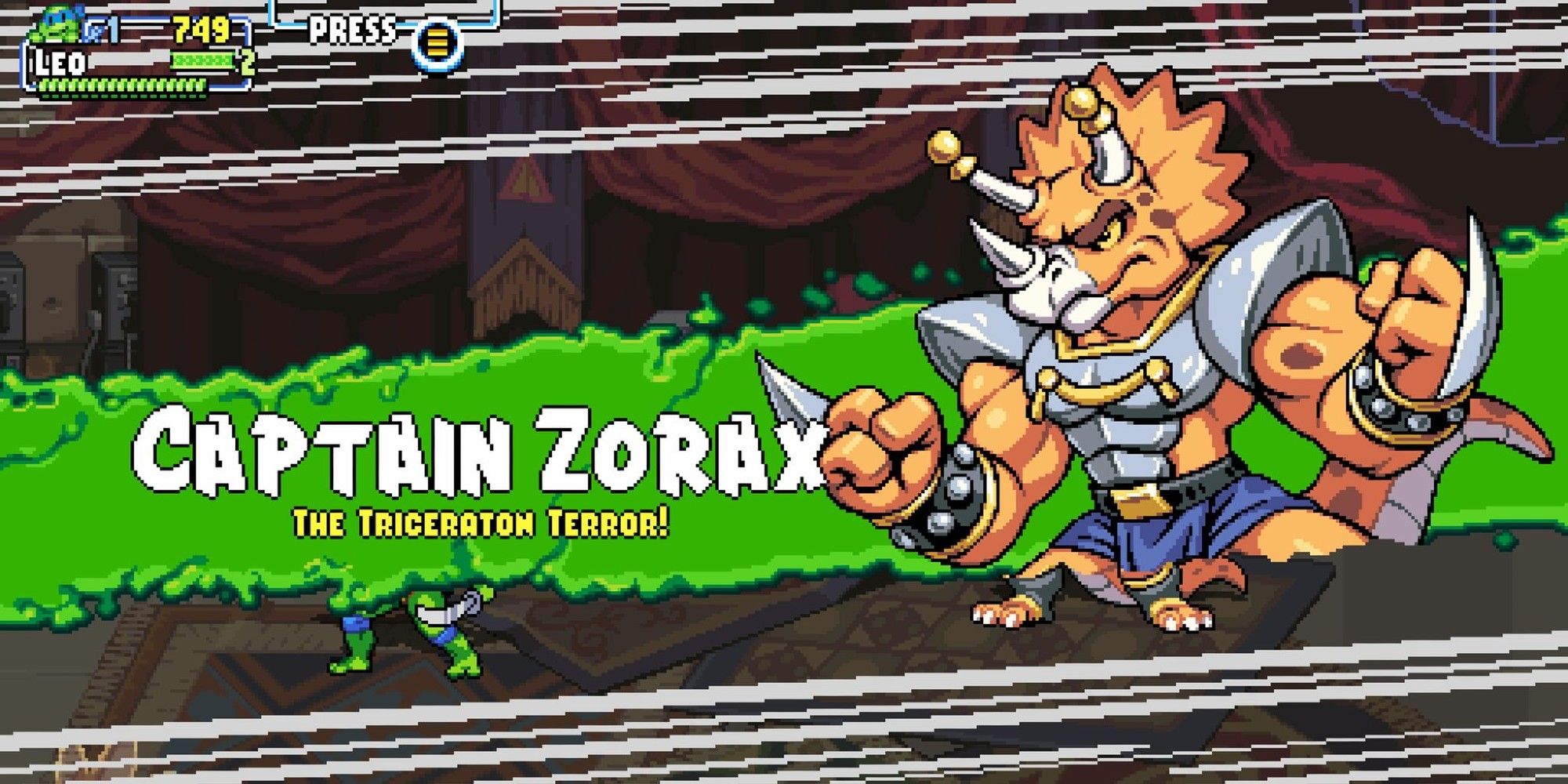 That's sort of how it feels when these dinos show up in Teenage Mutant Ninja Turtle: Shredder's Revenge. Whenever they appear, I know that I must give them my full focus. You can't relax and deal with other enemies first. You need to whoop their scaly ass as soon as they appear. Though the level's boss, Captain Zorax, appears to be a more heavily armored version of the basic orange Triceraton, he never summons any adds and is, thankfully, easier to dispatch, as a result. He boasts a shield and will shoot pink energy balls in all directions, but without anyone to help him, you can make short work of him. It's rare that a boss is easier to defeat than a basic enemy, but that's the case here.

Shredder's Revenge generally feels like a leisurely stroll through Turtles history, kind of like taking a tour of a Turtles museum. But when these Fanta-colored herbivores show up, it's like the museum you're touring is — surprise! — The Museum of Terrible Pain Inflicted By Alien Lizards. But, at least there's a gift shop. Oh no, they're in here, too!