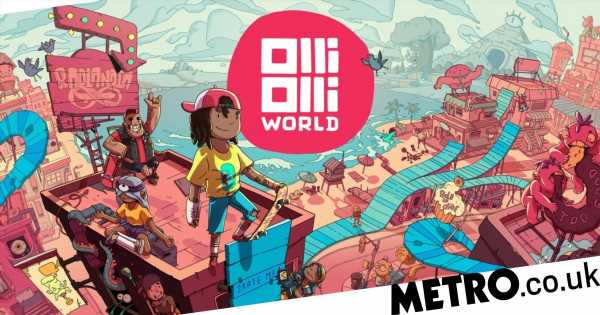 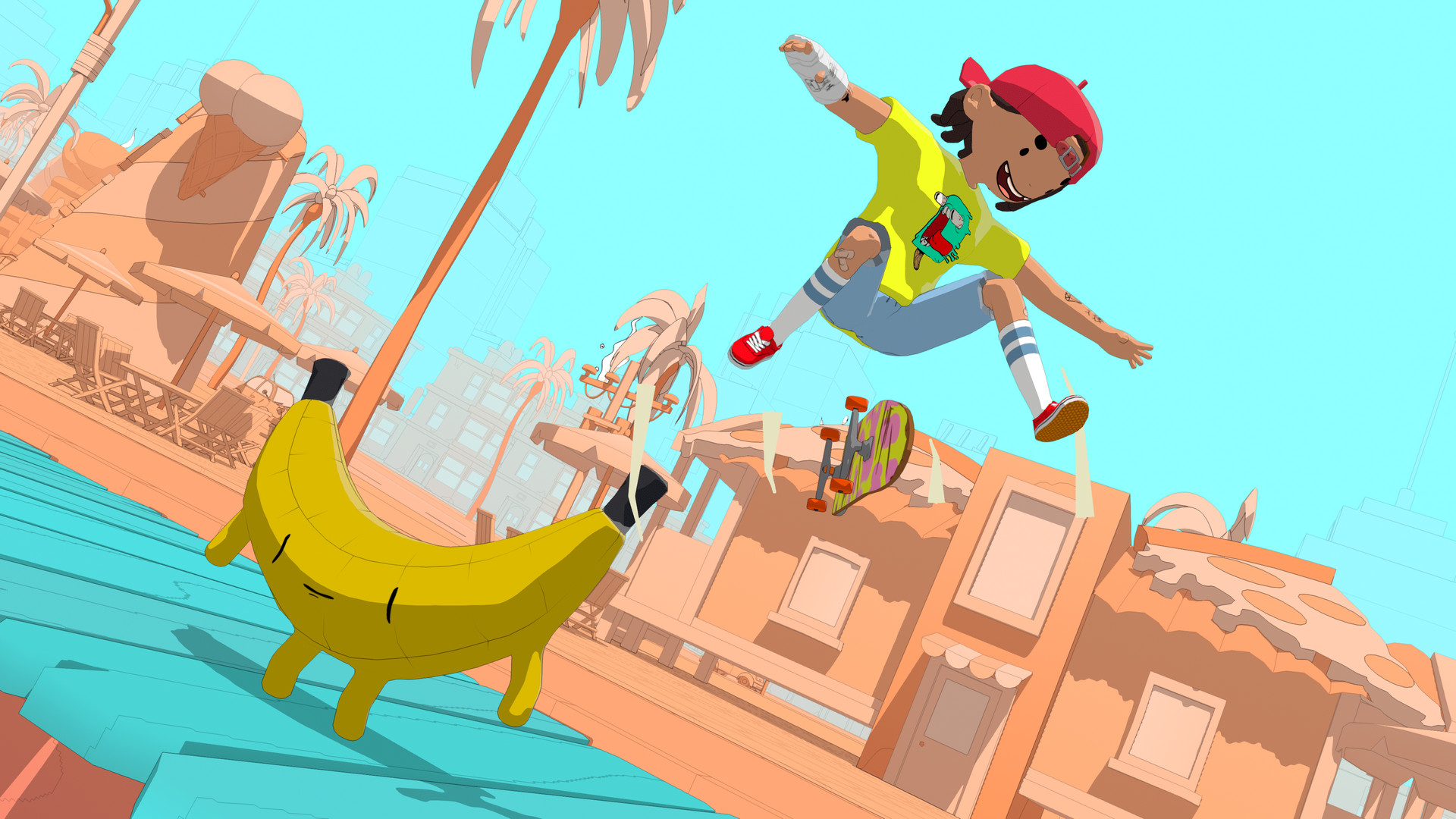 The indie cousin of Tony Hawk’s Pro Skater rises to the big leagues with a revamped personality and radical visuals.

OlliOlli has always felt overlooked in its contributions to the modern skateboarding resurgence. Between the aging titans of Tony Hawk’s Pro Skater and Skate, the 2D side-scroller from UK developer Roll7 is perhaps the most inventive addition to the genre over the past decade – streamlining the action into a fast, rhythm platformer with deceptive complexity.

Seven years since the release of OlliOlli2, third entry OlliOlli World represents a leap towards wider appreciation. The simplistic, grounded visuals of prior titles have been overhauled with a vibrant 3D cel-shaded aesthetic bursting with Nickelodeon-esque personality. It’s a huge visual improvement which benefits the gameplay too, with the bold splashes of colour signposting grind rails and platforms in a way that’s needed to match the game’s rapid pace.

Presentation is where OlliOlli World makes the biggest changes from its predecessors. Before you learn the basics, you’re thrown into a surprisingly comprehensive character creation screen, where additional hats, shirts, glasses, tattoos, and skateboard cosmetics unlock as you beat challenges in the main campaign. The dopey, charming character models make unlocking cosmetics desirable too, tapping into the personal expression at the heart of skateboarding.

Similar to the previous titles, OlliOlli World is split into five areas in a mostly linear sequence of levels. This time around there’s an overworld map akin to Super Mario World, complete with secret side quests which are locked behind specific criteria like high-fiving a character. While you only need to reach the end of a level to progress, repeat runs are incentivised through high score challenges and obscure objectives, like performing tricks in specific locations, finishing without using checkpoints or, for example, completing a run while avoiding scattered bananas.

Even if you’re not interested in unlocking cosmetics, the satisfying mechanics make repeat runs consistently fun. OlliOlli World is accessible on the surface, yet fiendishly layered and challenging when the breadth of its systems are unpacked. Thankfully, these are rolled out at an excellent pace across the campaign, allowing just enough breathing room so you’re always ready to learn a new mechanic – like spins, grabs or manuals – as they’re presented.

There’s subtle changes which make this entry more welcoming, most notablly in the landing mechanic. It still works largely the same as before; where you tap a button just before you hit the ground to achieve a ‘perfect’ landing, but you’re no longer harshly punished for failing to do so. It means that while a good landing is still necessary for racking up high scores, it can be ignored if you want to breeze through and simply enjoy the momentum.

Even though it’s more forgiving, OlliOlli World is no pushover. The trick system tied to analogue flicks is still fully intact, while maintaining combos between manuals, grinds, wall rides, and aerial tricks is still a delightfully challenging test of your dexterity and reactions.

Once all the mechanics open up – between tricks on both sticks, button inputs and spins on the shoulder triggers – OlliOlli World can become overwhelming in the amount of moves to consider. Some smart signposting of obstacles alleviates some of the juggling, like crystals which require you to perform grabs to smash through them, but at the highest level it’s still demanding, to the point where playing in handheld mode on Nintendo Switch might leave you concerned for the lifespan of your Joy-Cons.

This is amplified by the increased options within levels. Each is presented in 2.5D, with half-pipes and rails often switching your path into the background or foreground. It’s mostly a stylish visual trick, but there’s certain points where you choose your path manually, which might lead to a hidden character or a ‘gnarly’ difficult route. Coupled with the graphical overhaul, OlliOlli World’s levels are impressively dynamic, with background details like bustling skate parks and sentient trees making each environment pop.

All these levels are tied together with a light, goofy narrative. You’re joined on your quest to Gnarvana by a group of characters who bicker between levels, as you try to impress five skating gods that preside over each area. The dialogue fits the trippy cartoon aesthetic but, in truth, it’s never memorable enough to make the interactions worthwhile, so you’ll likely find yourself skipping through to beeline back to the skateboarding.

Aside from the campaign, OlliOlli World offers two modes with multiplayer elements. The best is Gnarvana League, where you compete against a small pool of online players for the high score. It’s essentially a daily challenge to improve your online rank and unlock more cosmetics, but the competitive edge is a welcome change of pace.

The second is Gnarvana Portal, a mode which generates levels based on parameters of your choosing, which you can share with friends. It feels like a half-step towards an actual level creator, with the randomised levels never as satisfying as the hand-crafted ones from the main adventure.

While some new elements feel undercooked, OlliOlli World lands the crucial aspects in bright, refreshed form. It builds on the excellent mechanics of the originals, with added means of expression, creative level design, and vastly improved visuals; the franchise feels revitalised as a soulful celebration of skateboarding culture, that’s never been gnarlier.

In Short: A bright and breezy revamp which builds on OlliOlli’s established mechanics with an abundance of personality and reverence for skateboarding culture.

Pros: Skating mechanics are slightly more forgiving, yet still as satisfying as ever. Visuals are a massive improvement. Great soundtrack and customisation options. Plenty of replay value with cosmetic rewards and challenges to beat.