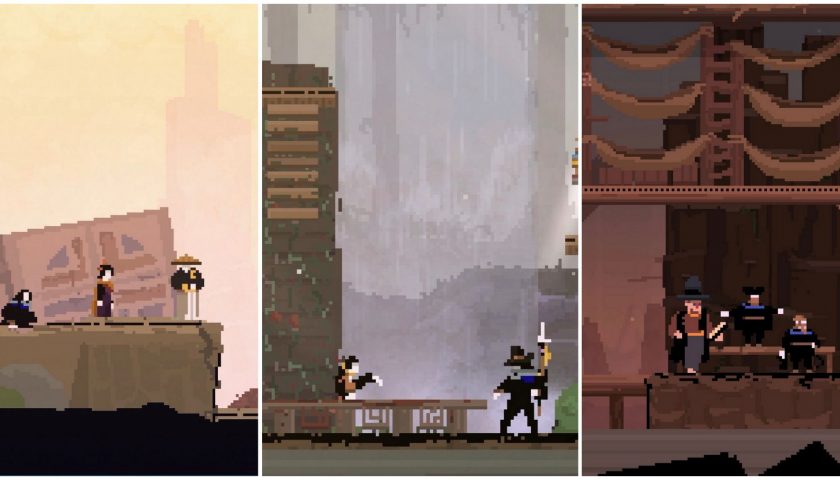 Olija tasks you to adventure through a strange and ethereal land as Faraday, a humble lord who seeks to help his people to regain wealth and status. Olija is a classic pixel art 2d adventure game with light Metroidvania elements via its expansive exploration and interconnected regions. Faraday must venture into the unknown and the darkness in order to gain the wisdom and riches he seeks.

Olija isn't a complicated game but there isn't really a tutorial to teach you the ins and outs of the experience which mostly means you are left up to your own devices. This lack of any tutorial is woven into the exploratory nature of the game and helps it to feel more organic and natural. However, this can lead to some frustrations since you don't always know what to do. Here are some tips to help you when first starting out in the game.

7 Avoid The Water – You Can't Swim 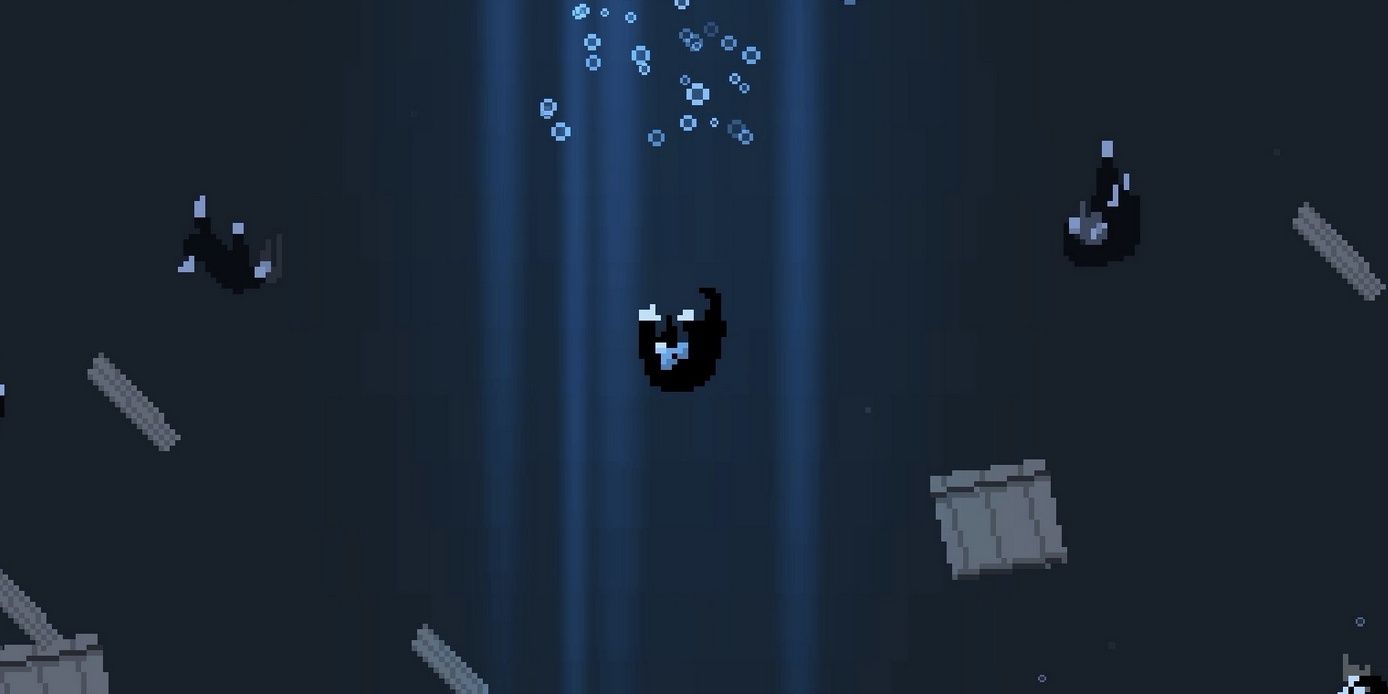 Olija starts off with a lot of water. After leaving your city, you and your crew are attacked and overturned by a massive whale, or some other oceanic monstrosity. Once you are actually given control of Faraday, you are able to explore the wharf location you now find yourself marooned upon.

Given that there is an abundance of water around you, you might think your character is able to jump in and swim around, however, this is not the case. If you try jumping into the water, you quickly take damage and respawn back on solid ground. Simply put, avoid the water at all costs. 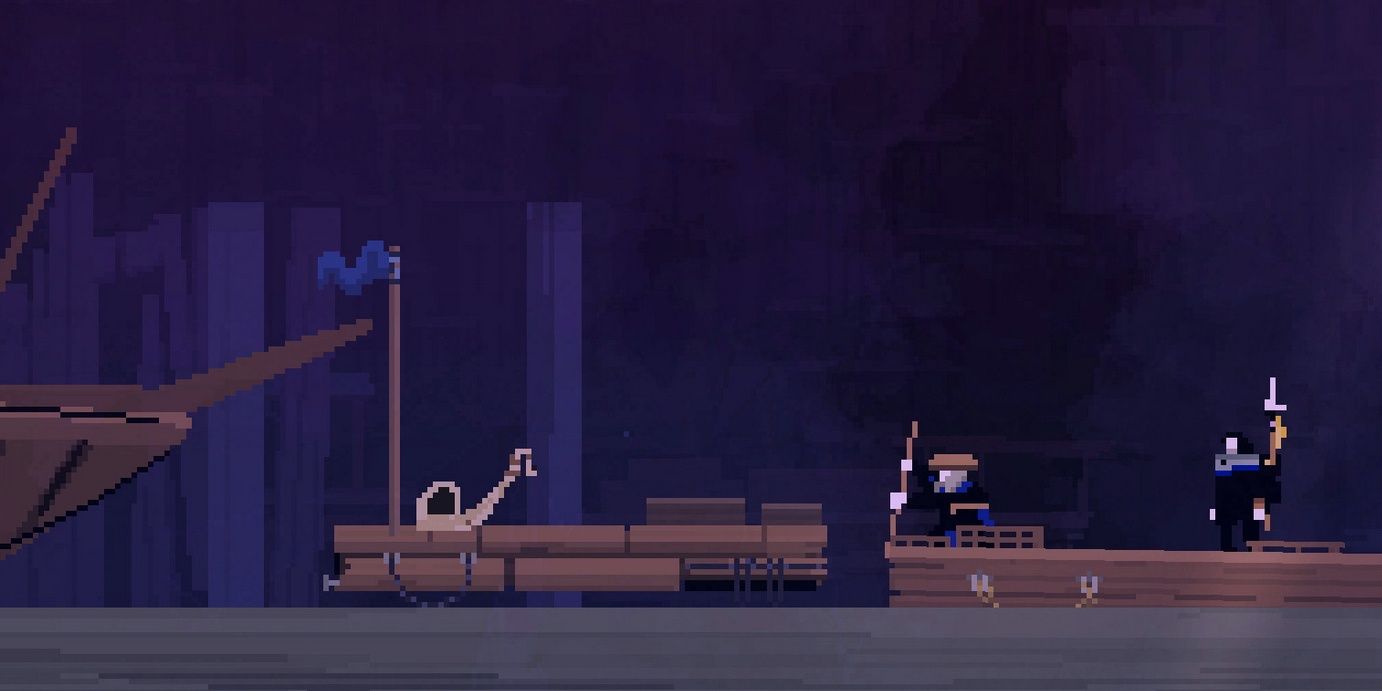 As you explore the various islands, docks, caves, and other mysterious locations, you will often encounter interaction spots that are typically indicated by a square icon with either a magnifying glass or doorway. These interaction spots are incredibly handy and either offer you some lore tidbits, items, or pathways.

It's very easy to run past these explorable spots since you actually have to hold down a button in order to fully interact with them. As you explore each new location, be sure to keep an eye out for these square icons. You are always rewarded with something useful to make your playthrough more enjoyable. 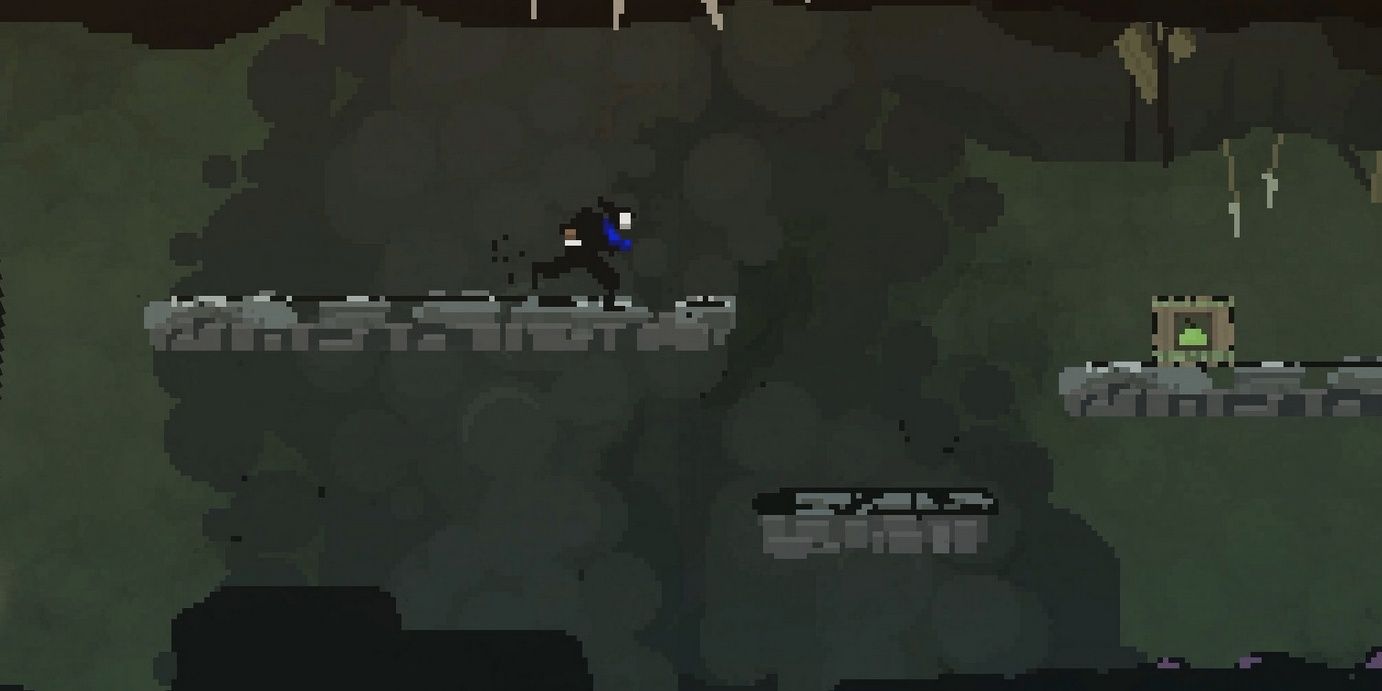 Much of your time playing Olija revolves around combat. There are a plethora of both human and non-human characters to fight off. Combat in Olija is fast, fluid, and frenetic, with you being able to combo together with a multitude of powerful attacks depending on the weapons you have equipped.

You are going to find yourself taking damage during battles, from traps, or from the aforementioned times of falling in water. One of the best ways to quickly heal is via small green plants. In order to obtain their healing power, simply whack them with your sword. These plants will then drop a healing herb which instantly restores a portion of your health.

4 You Can Ground Pound To Open New Areas 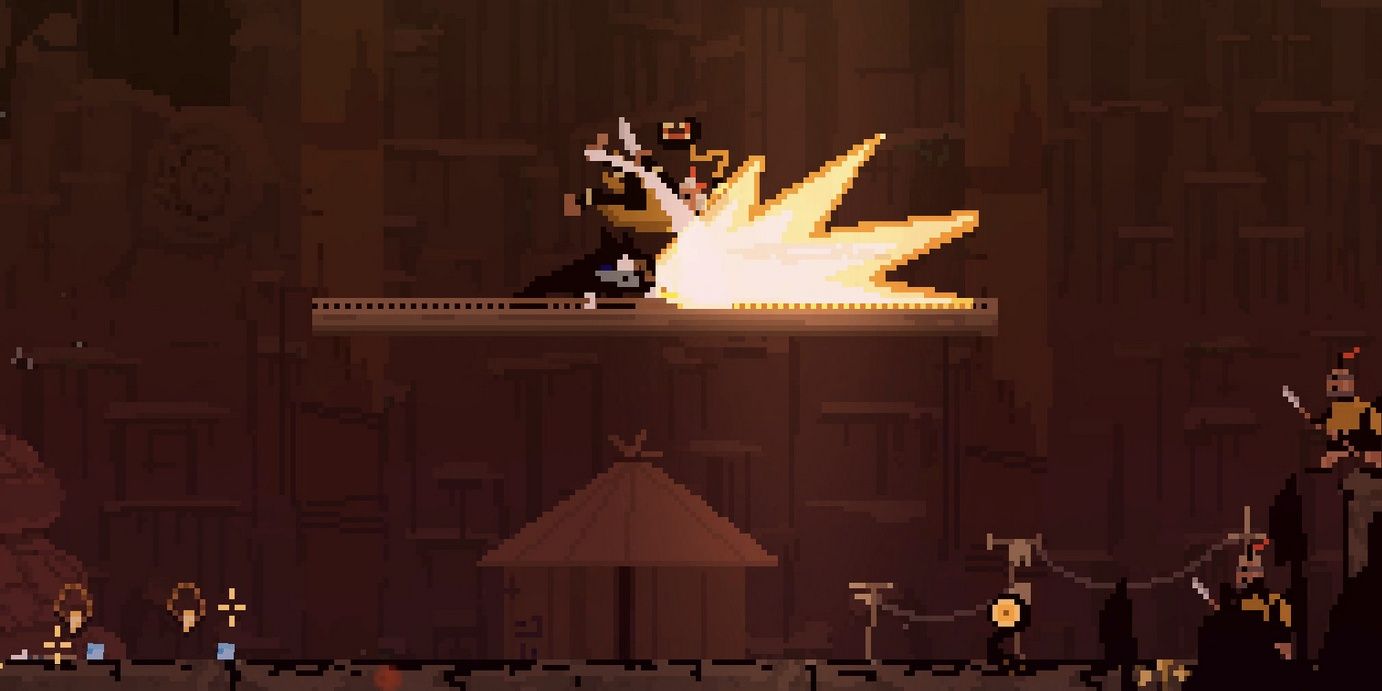 As mentioned earlier, the game doesn't really teach you about the skills and abilities you have at your disposal. This becomes clear pretty early on when you notice a somewhat broken board above an area that contains a treasure chest and some crates.

Fortunately, if you jump and attack while moving downward, Faraday will perform a powerful ground pound attack to shatter the boards, revealing the loot below him. Due to the fact the game doesn't outright teach you this maneuver, it can be super easy to miss. Get used to looking for semi-broken areas of the environment since they might lead to treasure. 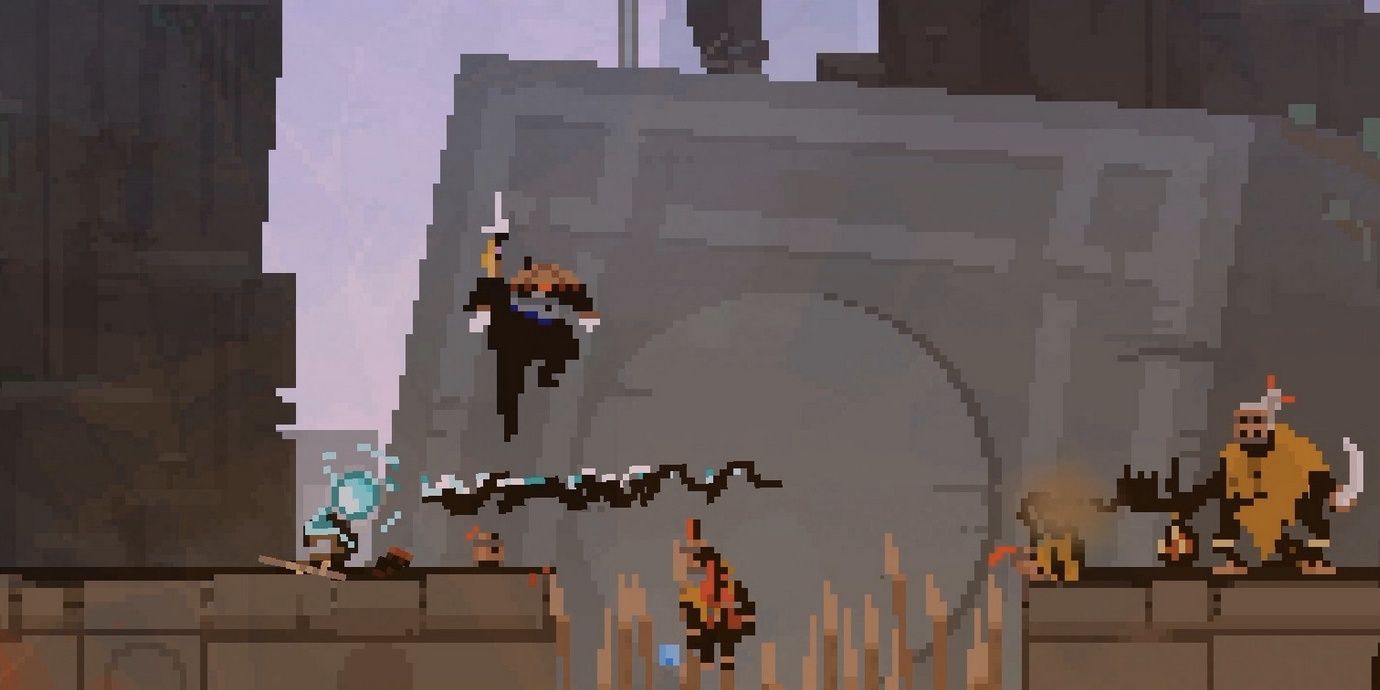 One of the most fun parts of Olija is when you first stumble upon your first secondary weapon, typically the rapier. Once you receive a secondary weapon you can use it to combo together a chain of attacks to dish out some serious damage to your enemies. However, did you know you can also use your secondary weapon as a tool?

As an example, in one of the earlier shadow zones, you can find a bunch of hanging crates that act as small prison cells. These crates are hanging by a thin rope. If you use your rapier on them, the ropes will break, dropping the crates to a lower position which typically serve as a new platform.

2 Use Shadow Gates To Warp 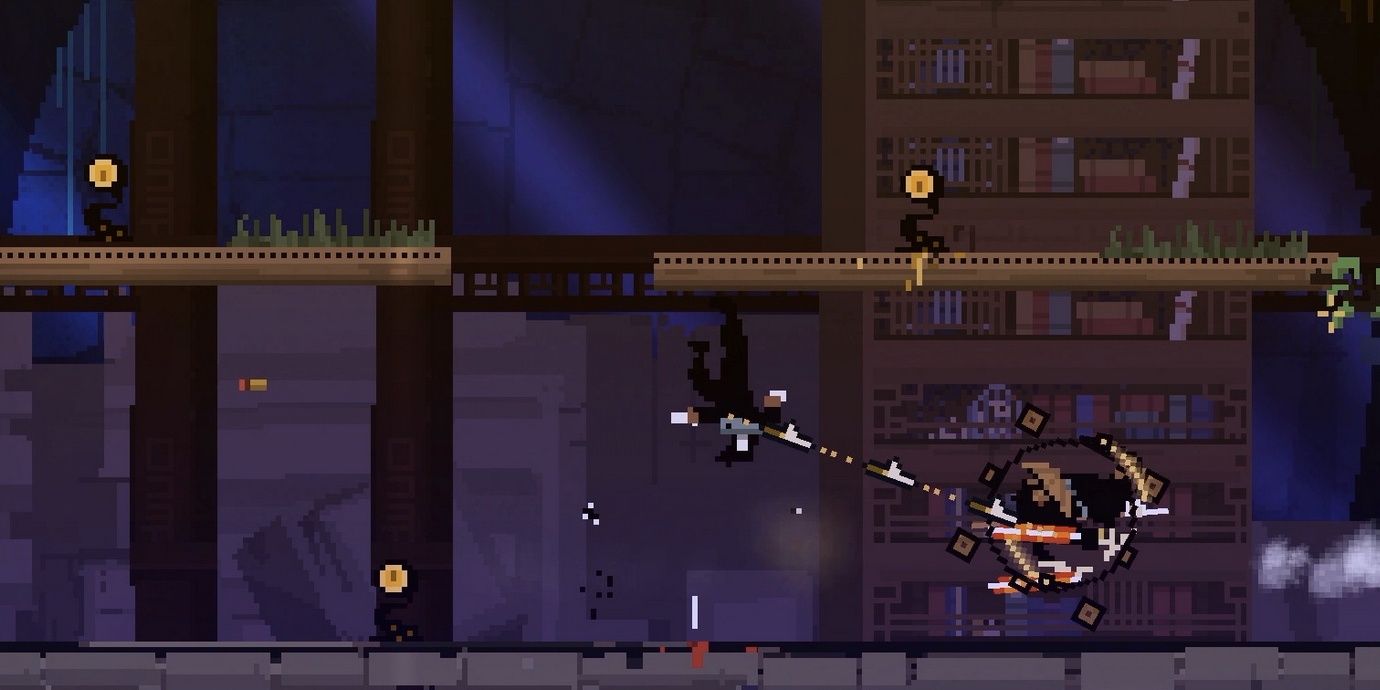 Throughout your journey, you will come across shadow doors or shadow gates. These doorways lead to a shadowy alternate dimension and generally have you explore an area in order to find a key or open a specific gate. These shadow gates, fortunately, aren't usually optional so you shouldn't just pass them by accidentally.

One of the best gameplay design aspects to Olija is that once you make it to the end of one of these shadow gate zones, you can easily warp back out to the main area via a secondary doorway. It's a simple thing but it goes a long way to ensure you are always moving forward in the game.

1 You Can Dodge Through Enemies

As mentioned earlier, combat is a large part of the game. You are constantly going to be coming up against smaller minion enemies as well as larger groups of more challenging opponents. While Olija isn't a particularly punishing or brutal game, you are still going to want to get used to staying nimble and agile in order to stay alive.

A great ability that Faraday has right from the get-go is his swift dodge dive. This dodge dive can easily get you out of harm's way both on the ground and when fighting vertically inclined enemies. Plus, this dodge dive has a few frames of invulnerability which means you can dodge through enemies to get the upper hand in battle.