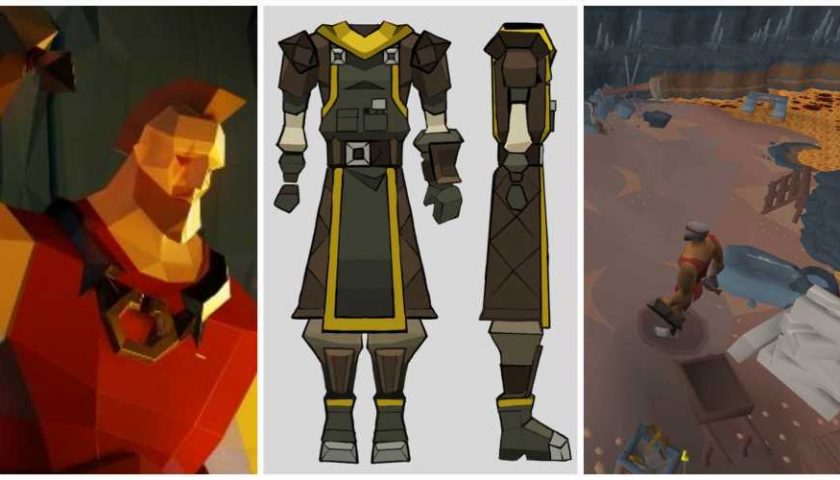 Smithing has historically been a repetitive, tiresome skill to train in Old School RuneScape, with the Blast Furnace dominating training at the higher levels. However, Jagex attempted to rectify some of this with the release of Giants' Foundry, a Smithing minigame accessible at low levels that provides a highly interactive alternative to the conventional Smithing experience.

Giants' Foundry is a fairly complex minigame that will take a while to get used to. It has a high skill ceiling and will require your attention, but this is rewarded with very high XP rates and various helpful rewards that can both enhance your minigame experience and your smithing exploits outside the foundry.

How To Unlock Giants' Foundry 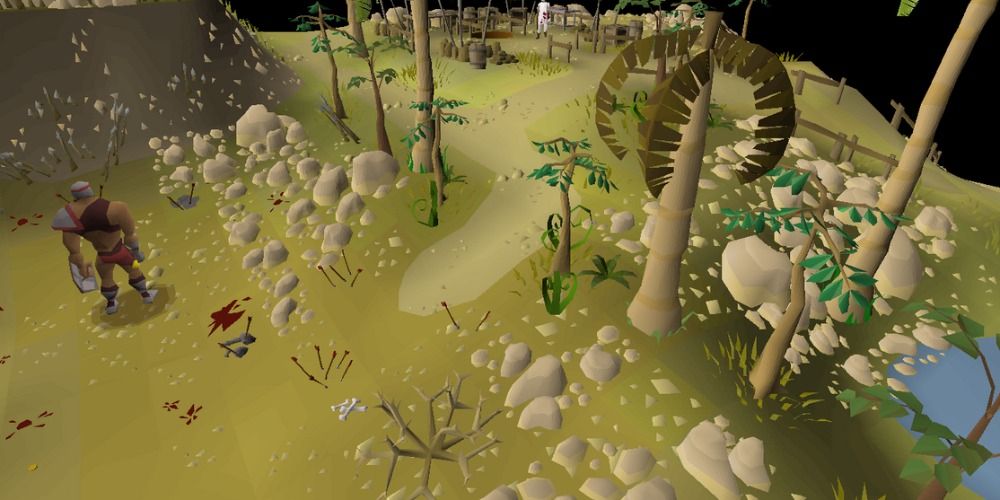 Before you can play the Giants' Foundry minigame, you need to unlock it. This requires you to complete a short quest called Sleeping Giants, which sees you helping a Hill Giant called Kovac to restore an ancient giants' forge that he has stumbled upon. Although it requires a fair amount of item gathering, the quest shouldn't pose any trouble, as long as you satisfy the level 15 Smithing requirement to complete it. You can start the quest by finding Kovac at the Giants' Plateau.

Although the level 15 Smithing requirement isn't steep compared to some of Old School RuneScape's quests, you can still circumvent it if you wish by completing quests that grant Smithing experience. For example, The Knight's Sword will take you all the way from level 1 Smithing to level 29, not only allowing you to unlock Giants' Foundry but also giving you a strong head-start on your Smithing journey.

The Giants' Foundry is an ancient forge once used by the Hill Giants. Although it's better suited for larger species, you'll still be able to use the equipment here to make massive swords for Kovac, who owns the forge. You can use the equipment for free, but you'll need to supply your own metal bars. The bars you bring should be appropriate to your Smithing level, although you can use any combination of different types of bars – for example, at level 70 Smithing you can use any type of bar up to Adamant.

You can use metal equipment instead of bars if you want, although you'll get one fewer bar from it than what was used to smith it. So, a Rune Platebody in the foundry will be treated as four Runite Bars even though it is created with five.

You'll start by getting a commission from Kovac, where he details exactly what kind of sword he wants you to create. Then you'll get to work on making a sword that satisfies him – the better you do, the more rewards you'll receive at the end. The first step is to choose your moulds, once for each part of the sword. Then you'll want to fill up the crucible with your metal bars, and pour the molten metal into the moulds you've lined up to create a sword preform.

The bulk of the minigame is in turning this preform into a finished sword, which you'll do by hammering, polishing, and grinding it at various points. You'll also need to manage the temperature of your preform while finishing it: you can either dunk it in lava to warm it up or quench it in a waterfall to cool it down.

Eventually, you'll have a finished sword which you can hand in to Kovac for rewards. Your rewards will vary on your performance, but will almost always include money, experience, and reputation (which is to be spent in the rewards shop). However, if your sword doesn't reach Kovac's exacting standards then he won't give you any rewards at all!

Creating And Refining A Sword, In Detail 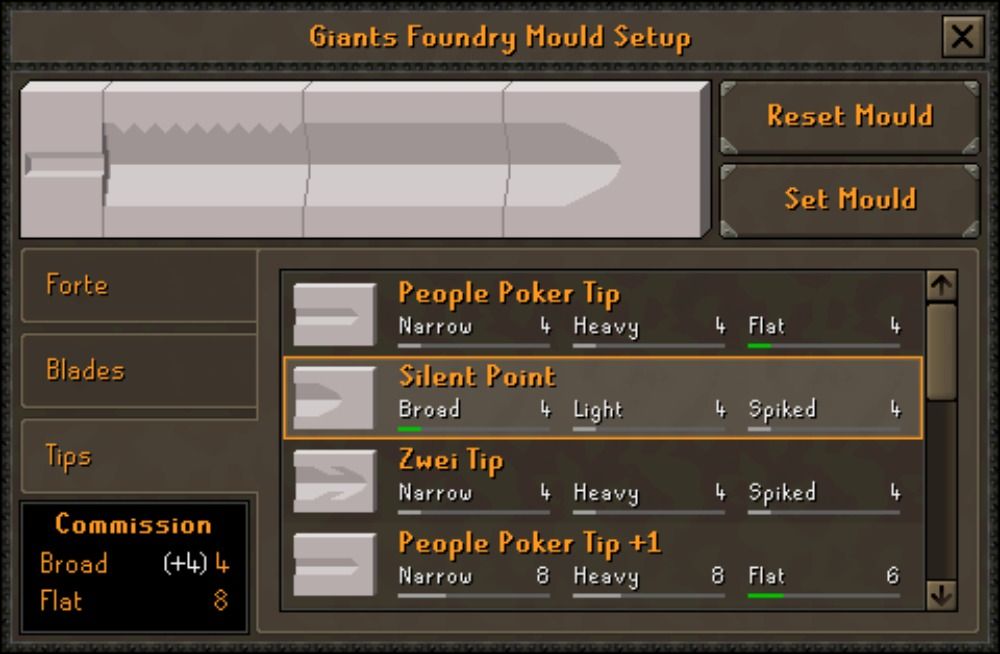 On entering the foundry, the first thing you do should be to fill up the crucible with as many bars and armour pieces as you can. Then, you should talk to Kovac to get your commission, and remember it well – you'll need it to pick the perfect moulds for your sword.

Go to the mould station next, and choose three moulds that best reflect your commission: one each for the sword's tip, blade, and forte. Each mould will boost the quality of certain types of sword; so, for example, if you've been tasked with making a broad, heavy sword, you should look for moulds that have the best ratings for these stats.

Head back to the crucible and pour your metal through, into the mould. After a short time, this will set into a preform, which you should take out of the mould and begin to refine. The preform can't be handled normally, however: you'll need a Bucket of Water in your inventory to touch it. Alternatively, wearing Ice Gloves allows you to pick up your preform without a Bucket of Water, if you have access to them.

The refinement step is the final part of the minigame, and it is the one that requires the most involvement from you. Three status bars will appear on your screen; from top to bottom these are a quality indicator, a temperature meter, and a process indicator. The bottom bar tells you what you need to be doing at all times, so you need to pay the most attention to this, although you'll want to monitor the sword's temperature as well.

There are three stations you might be working at – the Trip Hammer, the Grindstone, and the Polishing Wheel -, as well as a Lava Pool for heating your preform and a Waterfall for cooling it. Where you need to be will depend on your process indicator. If, for example, it shows the hammer icon on a red background, you'll need to be working at the Trip Hammer while using the Lava Pool every so often to ensure that your temperature meter stays in the red zone.

Once you're done, hand in your sword and reap those sweet rewards!

Your rewards will be threefold: on handing in a sword you'll receive Smithing XP, money, and reputation to be spent in the rewards shop. As is to be expected with a RuneScape minigame, the rewards shop can be accessed by talking to Kovac and includes a variety of Smithing-related rewards that will help you both inside the foundry and outside it.

Firstly, you can buy various moulds that can be used in the Giants' Foundry minigame to give you more options when creating your swords. These will help you craft better-quality swords in the minigame, although they each have Smithing level requirements that you need to bear in mind.

Perhaps most prominently, you can buy four parts of a Smiths Uniform, which not only makes you look like a master smithy but also provides passive Smithing bonuses while you wear it. Each piece gives you a 20 percent chance to speed up a Smithing animation by one tick and also a 20 percent chance to speed up progress in the foundry – both of these percentages jump up to 100 percent when you're wearing the entire set.

When you're in the Giants' Foundry, you'll be doing a lot of running around. Wearing a set of Graceful armour is an excellent way of maintaining your run energy, although if you're wearing the Smiths Uniform instead you can opt to bring a few Stamina Potions instead.