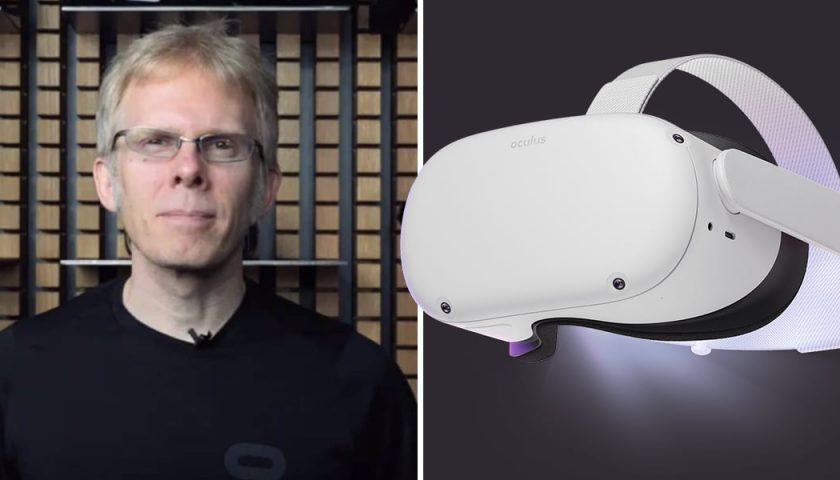 Facebook is trying to increase production of Quest 2 amid a global silicon chip shortage while planning regular software updates for its $299 headset that may put the headset, and its follow-ups, on a path that may convince some buyers to pick up a standalone VR headset instead of a Chromebook or tablet.

A recent talk between Facebook’s vice president in charge of VR, Andrew Bosworth, and consulting technical officer John Carmack offered some of the clearest insights we’ve seen yet into the company’s strategy in VR.

For instance, the talk revealed Facebook is planning to keep Oculus Quest 2 available to buy for a “long while” while making clear a more sensor-laden “Quest Pro” won’t be hitting store shelves this year. The conversation was held in Twitter Spaces, which doesn’t yet archive audio broadcasts. We recorded the interaction, however, and plan to post a full transcription and edited audio file later this week.

We also went through some of the comments in our virtual studio earlier this week which you can check out in our video below.

Another section of the talk refers to a “year of software” updates meant to deliver “a rolling thunder of product improvements for the Quest 2,” as Bosworth put it.

Back in January we learned Facebook planned monthly updates for Quest with the latest version, software v28, marking a significant milestone with the addition of “Infinite Office” features to bring your desk into VR and the ability to track a bluetooth keyboard with integrated trackpad so it is feasible to actually do some work in VR.

Carmack mentioned the need for Facebook’s VR products “to be something that somebody hard up for money decides I’m going to buy a VR headset instead of a Chromebook or instead of a tablet. And we need to do everything that those devices do. You know, we need to have similar app libraries. We need to be just as effective with keyboard and mouse. We need it to be something that you could put on your head and do the work that you need to do during a normal day.”

Carmack notes this type of use case has been regularly demonstrated for the better part of a decade, but they “were silly gimmicks at the lower resolution” inherent to earlier headsets. He noted the need to further improve the optics, resolution, and weight of headset designs over subsequent products, but argues that Quest 2 is “at the point where it’s becoming reasonable,” and they need to get the “software infrastructure in place” so that when the hardware is good enough they can tap into “hundreds of millions of users.”

“We can absolutely make it better than cheap little netbooks that people are hunched over in terrible posture,” he said.

Here’s the transcribed section of the conversation with notable portions bolded by us:

John Carmack: My internal pitch for the best super broad strategy for VR, aside from gaming, is screens and people. One of the points that I make is that the investment into conventionally viewed media, whether it’s content, media, applications, things that you do on your screens, your phones, your PCs, your TVs. There’s trillions of dollars of investment that’s gone into that over the last 50 years. And I think it’s just insane to consider that, well, VR is a blank slate people need to come in and reinvent everything. So I think taking advantage of all of those surfaces is something that we absolutely have to do in VR because right now we are still largely an early adopters toy where a lot of people that have VR already have everything else and we’re just adding some new spice, but we need to be a displacement device where we need to be something that somebody hard up for money decides I’m going to buy a VR headset instead of a Chromebook or instead of a tablet. And we need to do everything that those devices do. You know, we need to have similar app libraries. We need to be just as effective with keyboard and mouse. We need it to be something that you could put on your head and do the work that you need to do during a normal day. And I think that we’ve seen the glimmers of light on what we need to do for that. And with Quest 2’s greater screen density we are at the point where it’s becoming reasonable. Ever since DK1 people made demos of “oh, look, I did some programming work inside a headset,” but they were silly gimmicks at the lower resolution. We’re at the point now where it’s still not great but it’s like looking at a 1080P monitor that happens to be gigantic, but you can be flexible. You can do all these great things where it’s not going to be as good as like my home workstation with triple monitors, but we can absolutely make it better than cheap little netbooks that people are hunched over in terrible posture. So I think that on the Quest 2 platform, which as you say, is going to be in market for a while that we can make something that is better than doing work -like some people have to do emergency things on your phone we can absolutely be better than that. You know, we can be better than the cheap netbooks and we can start competing with some of the better systems. And as we move to future products, whether Quest Pros, Quest Quest 3s, whatever. We could have the software infrastructure in place so that as our optics improve, we really can be looked at as a monitor replacement. And I think that’s how we get truly mainstream when we’re talking hundreds of millions of users.

Andrew Bosworth: There’s this old story in the PC era about called “The Reason To Buy And The Excuse To Buy” and the reason to buy a PC was to play games, the excuse to buy was to do spreadsheets. And until you could do both games and spreadsheets you couldn’t buy it because you need both the reason and the excuse. We’ve got plenty of reasons to buy Quest 2, I think for some people they’ll need the excuse. They’ll need to have a justification they use that introduces that technology to them. And that is really critical to breaking fully mainstream to the point yeah, to your point where you’re getting out to nine and 10 figures of people in the headsets.

Update: Post updated about 30 minutes after publication with changes to how it refers to current and future Facebook headsets and the overall direction of software updates.