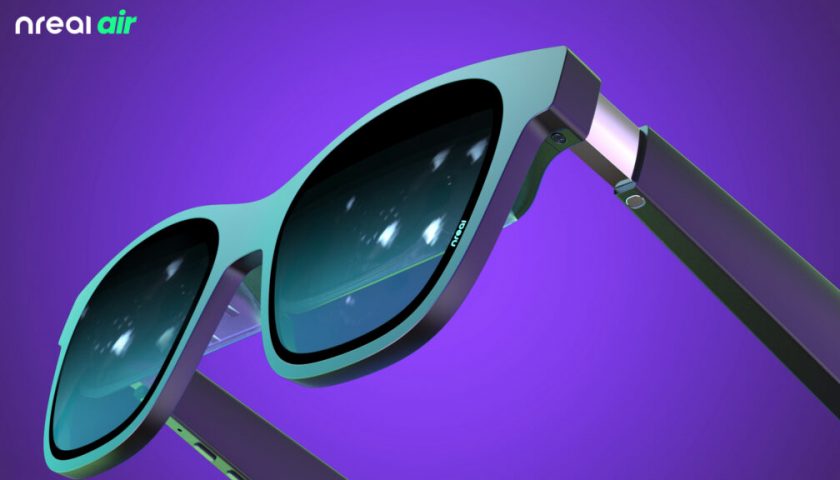 While Facebook’s first foray into smart glasses tech, Ray-Ban Stories, was putting a camera and speakers in sunglasses, companies like Nreal have already been outfitting their’s with augmented reality (AR) features. Nreal Light launched back in 2019, today seeing the next iteration coming to light in the form of Nreal Air.

Just like its predecessor, Nreal Air is a smartphone tethered pair of AR sunglasses, enabling you to watch videos or play games on a giant virtual screen. This time, though, Nreal has managed to make the Air smaller, lighter and much more stylish than before – although the only images released so far are renders.

The company says that Nreal Air weighs in at 77g – Nreal Light was a chunkier 106g – and is capable of projecting a 130-inch virtual display at 3 meters or a whopping 201-inch display at a virtual six meters. This is thanks to a micro-OLED chip that can support a claimed 49 Pixels Per Degree (PPD) at its maximum. And to make sure the experience is nice and smooth it all runs at a 90Hz refresh rate.

That weight reduction works in conjunction with several other features to ensure the Nreal Air is comfortable to wear. An adjustable 3-Step Rake System gives you the option to adjust the viewing angle by tilting the lens, whilst the elastic temples hug the head so the glasses don’t suddenly slip.

One of the most important additions in terms of compatibility and customer reach is that Neal Air will not only support most Android devices but Apple iOS products as well, beating Apple’s own AR headset plans.

“Consumers today are seeking lighter, but longer-lasting AR glasses exclusively for streaming media and working from home. For instance, in Korea we’ve found that 78% of our users use Nreal Light to watch streaming content,” said Chi Xu, Founder of Nreal in a statement. “Nreal Air builds on our Nreal Light offering and furthers our mission to spread AR globally. With Nreal Air, we’ve zeroed in on the perks of a portable movie theatre and condensed this into lightweight AR sunglasses with a zero-footprint display, while making it affordable.”

When it comes to getting hold of an Nreal Air the process is going to be similar to the Nreal Light. Nreal Air will initially launch in Japan, China and South Korea during December, available through telecom companies. The rest of the world will have to wait until 2022. No Price has been revealed although Nreal has said the new glasses: “will retail at a fraction of the price of Nreal Light,” which retailed for around $586 USD.

Depending on where you live you might be waiting quite a while to purchase an Nreal Air. Outside of its home Asian markets the Nreal Light only came to Europe via Vodafone, and that was only in Germany and Spain. As further details on these new AR sunglasses are released, VRFocus will let you know.