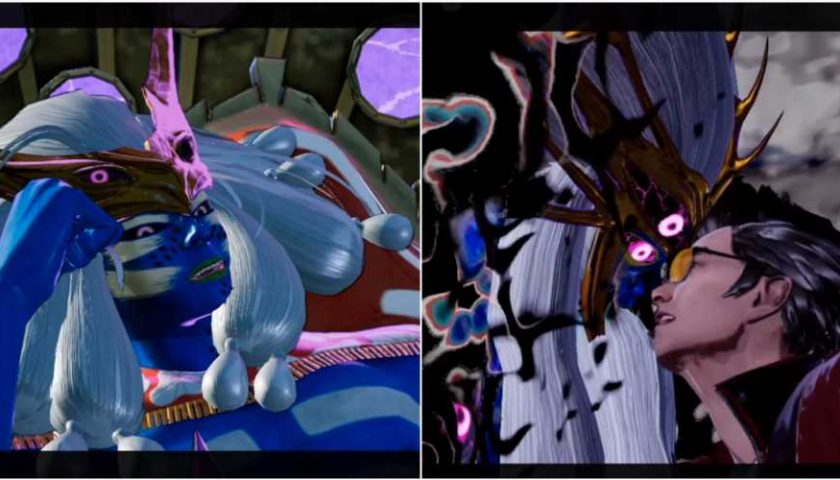 Jess Baptiste VI, also known as FU, is the main antagonist in No More Heroes 3. He makes his first appearance at the start of the game and is Rank 1 in the Galactic Superhero Rank. Much later, Jess makes his last appearance in Episode 10, titled "Friends," on the Damon Tower stage. However, he appears on multiple points in the game to deal with other ranking members or show his anger at Travis.

After meeting FU at the top of Damon Tower, Travis Touchdown starts to insult Jess Baptiste VI. This causes FU to become angry, which starts the fight between the two main characters in the game.

Jess Baptiste's Battle And Its Rewards 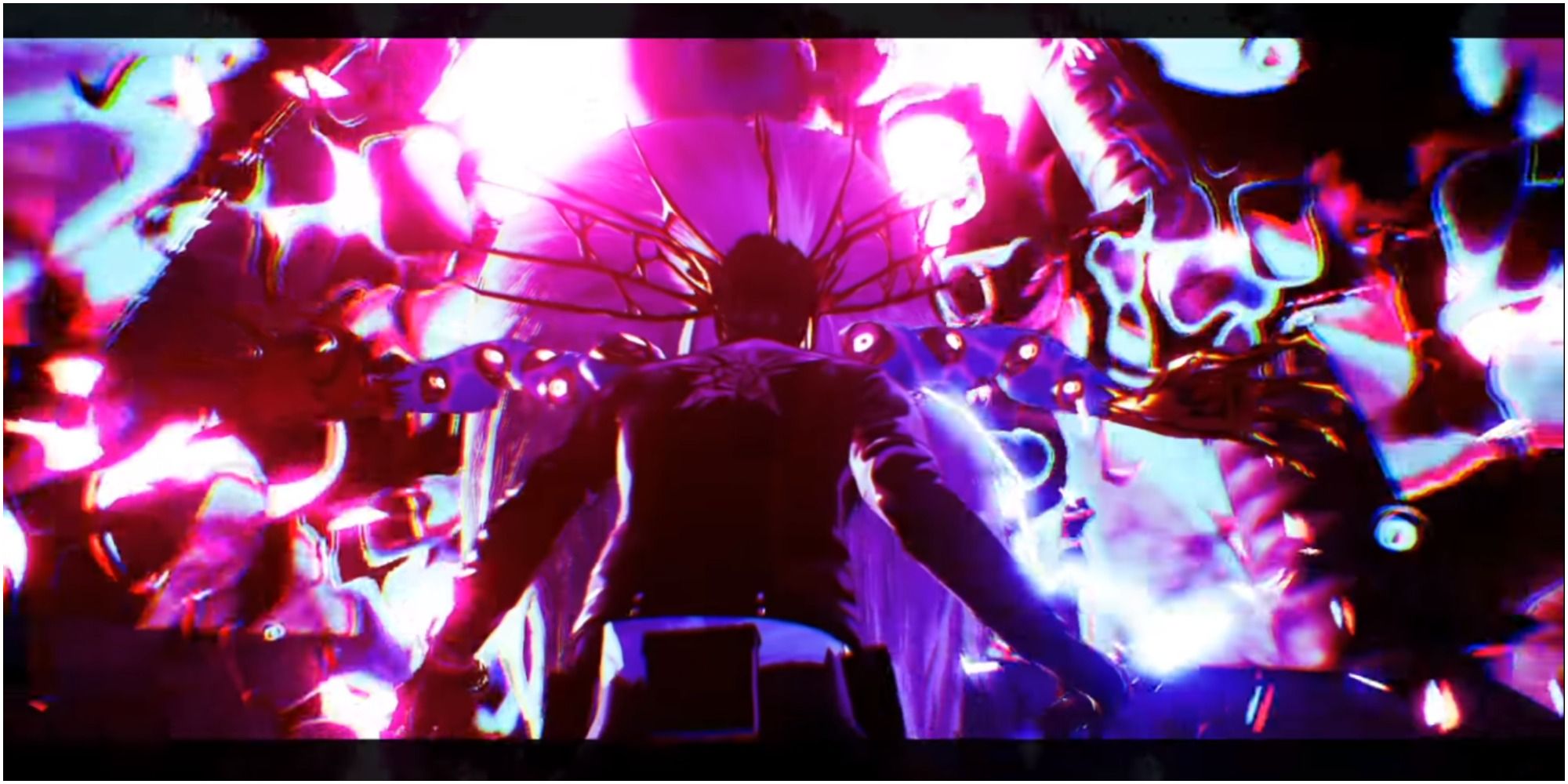 The initial cutscene will show FU filled with anger causing his eyes to open all over his body. The first half of the fight will take place in Damon Tower, while the second half will happen inside the UFO. Defeating Jess will earn you the Baptiste Family Secret Treasure (Rare). If you beat the boss in the Time Machine on Death Difficulty, you will get Mark of a Goddamn Superhero (Super Rare). 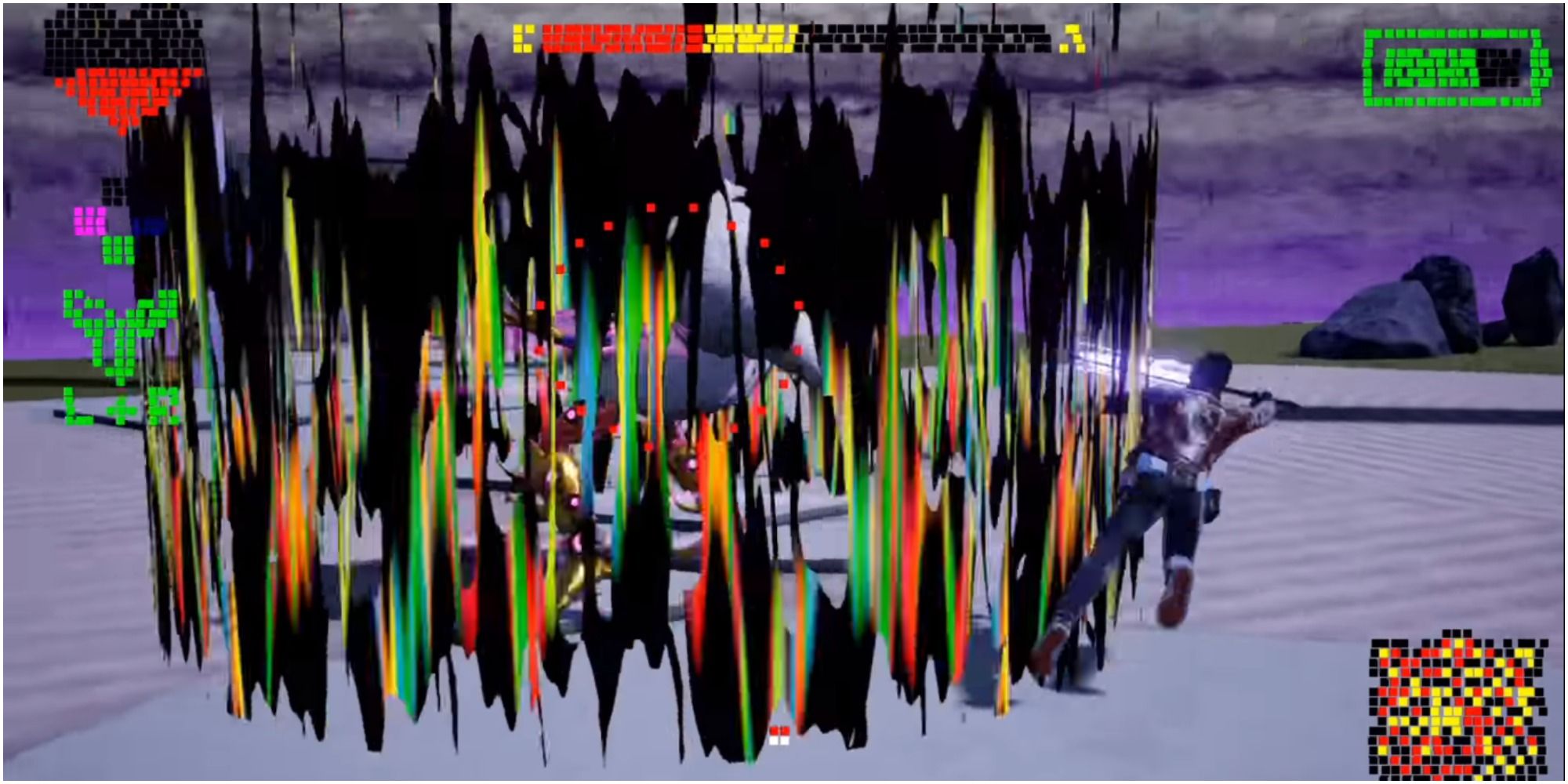 FU has a plethora of attacks that he uses throughout the entire fight. Most of these moves are hard to dodge, and you need to react to them quickly. Following are all the attacks present in every phase of the fight:

How To Beat Jess Baptiste 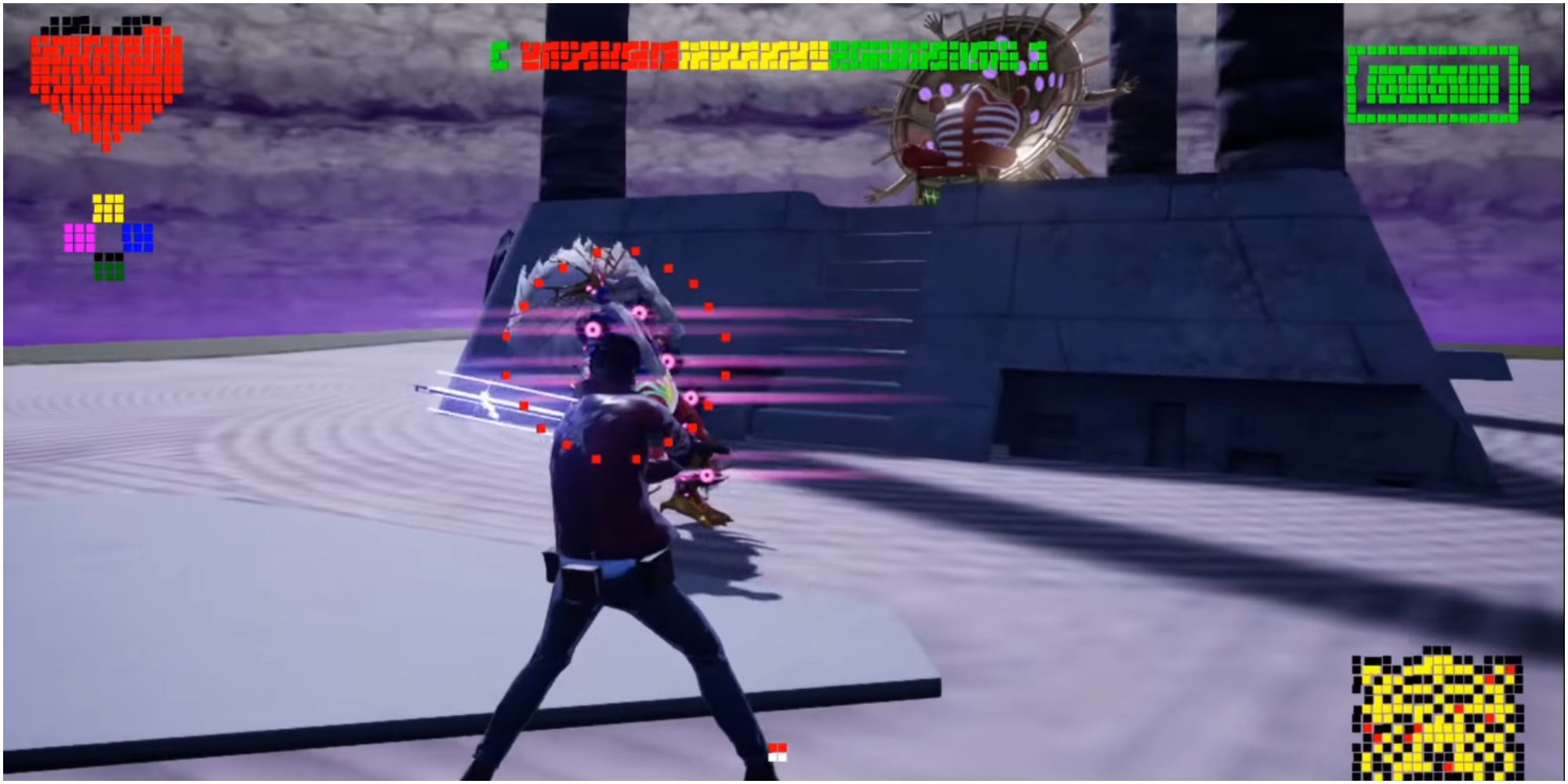 There are two sections of the boss fight with Jess Baptiste VI. FU will have three health bars in the first half of the battle. In the green health bar phase, the boss will use his close-ranged basic attacks. These consist of slashes and a sweep kick that you can easily dodge or block. Whenever you are close or mid-range, FU will throw out two waves of Golden Spikes at you that can be blocked or avoided. Occasionally, Jess will lunge at you trying to grab you. Whenever you see the lunging animation, dodge this because he will attack you and knock you down on the ground if the grab is successful.

Try to mash FU with attacks to get the Slash Reel Effect, as it is excellent against him. Attacking him at the same time he does and performing wrestling moves increases the chances of getting these effects.

At long range, FU will whip his hair and shoot spikes your way that are easily blocked and dodged if the timing is right. 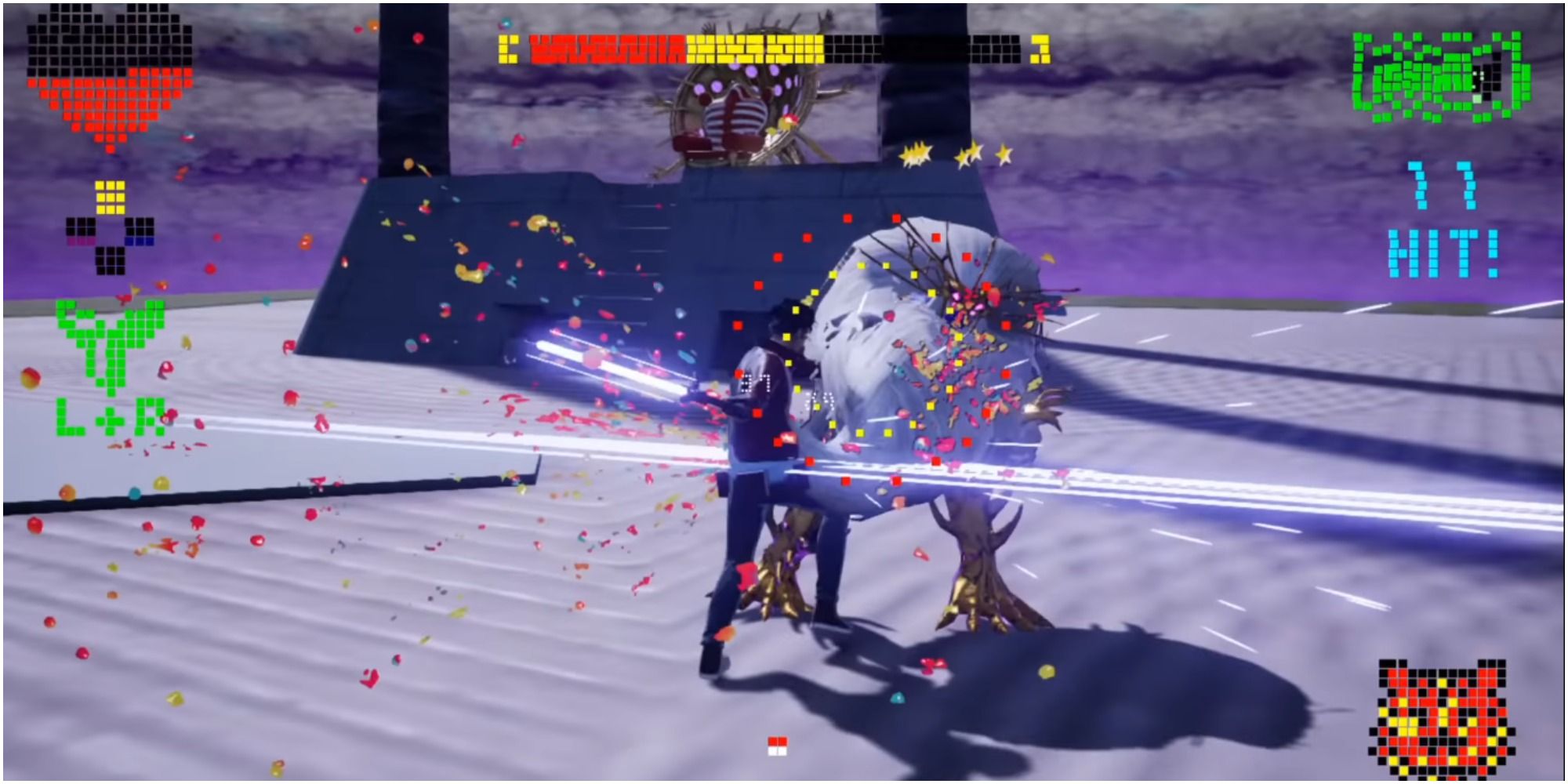 In the yellow health bar phase, FU will lift up and throw a giant Dark Energy Bomb at you. You can dodge this attack as soon as it makes contact with the ground. Make sure to keep running even after dodging as the bomb makes a blast radius upon impact. The boss will charge up and emit Dark Energy around him from time to time. Running away from it is optimal for your safety.

You can use Death Skills such as Death Kick and Death Force to interrupt his charging attacks. These will do severe damage to the boss and cancel the attack animation. 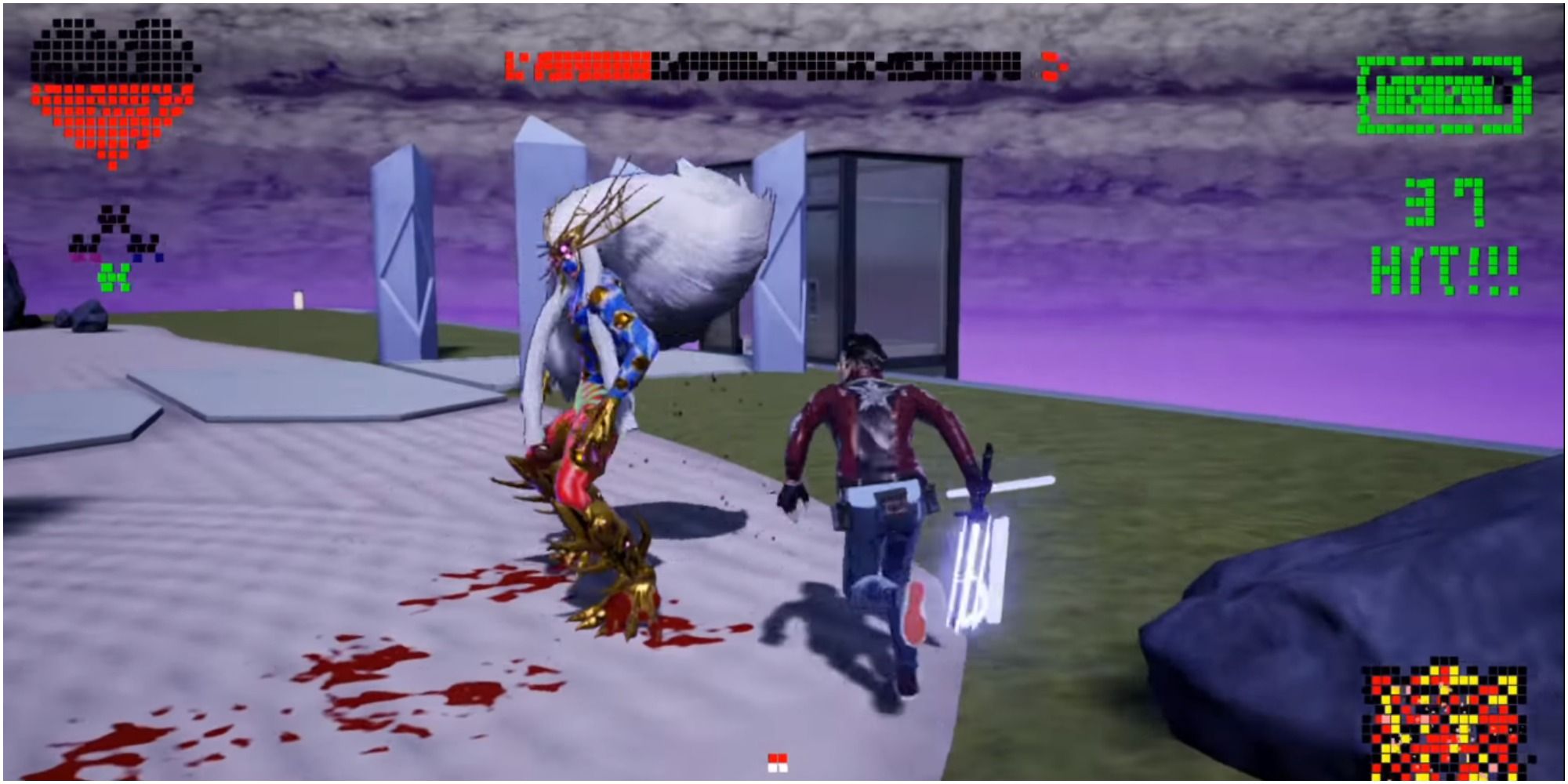 The red health bar phase is the last phase of the first section of the fight. In this stage, FU will have two new attacks. The first one is the Hair Spikes, where he conceals himself in a pillar of hair and makes red spikes follow Travis. Running away from the spikes is the only option to avoid taking any damage.

Using Full Armor during FU's charge attack is highly recommended as his eyes are closed for a long time, and Multi-Missiles deals massive damage to his health bar.

The second attack is where Jess charges up to teleport above you and ground slam you. You need to dodge this when you see the teleport animation. Failing to dodge will knock you down, and you will take high damage. Even if the slam misses, FU will emit a shockwave that can knock you down, so dodge right after the first hit misses. 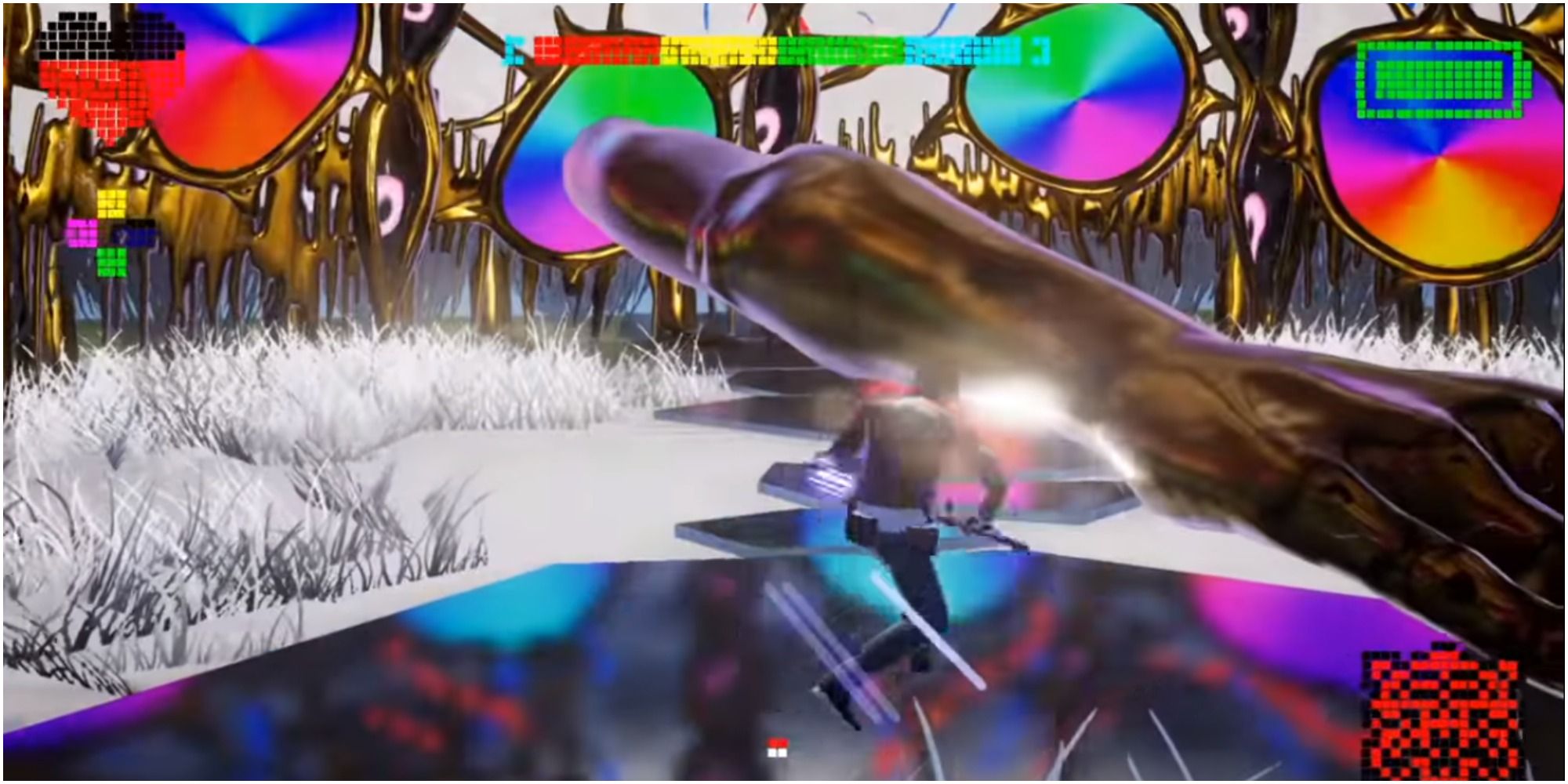 After the first section of the fight finishes and all his health bar is gone, FU will go to his UFO and make you enter his Dome. Here Travis will find himself surrounded by portals on the walls. Jess does not have many attacks in the second section of the fight, but you will still need to dodge the ones he has and counterattack. His first attack involves sticking his hand out of a portal to attack you. Avoiding this is the only option. After a successful dodge, Jess will take back his hand inside the portal after a few seconds.

In these few seconds, you need to attack his hand over and over again to deal damage to his four health bars. 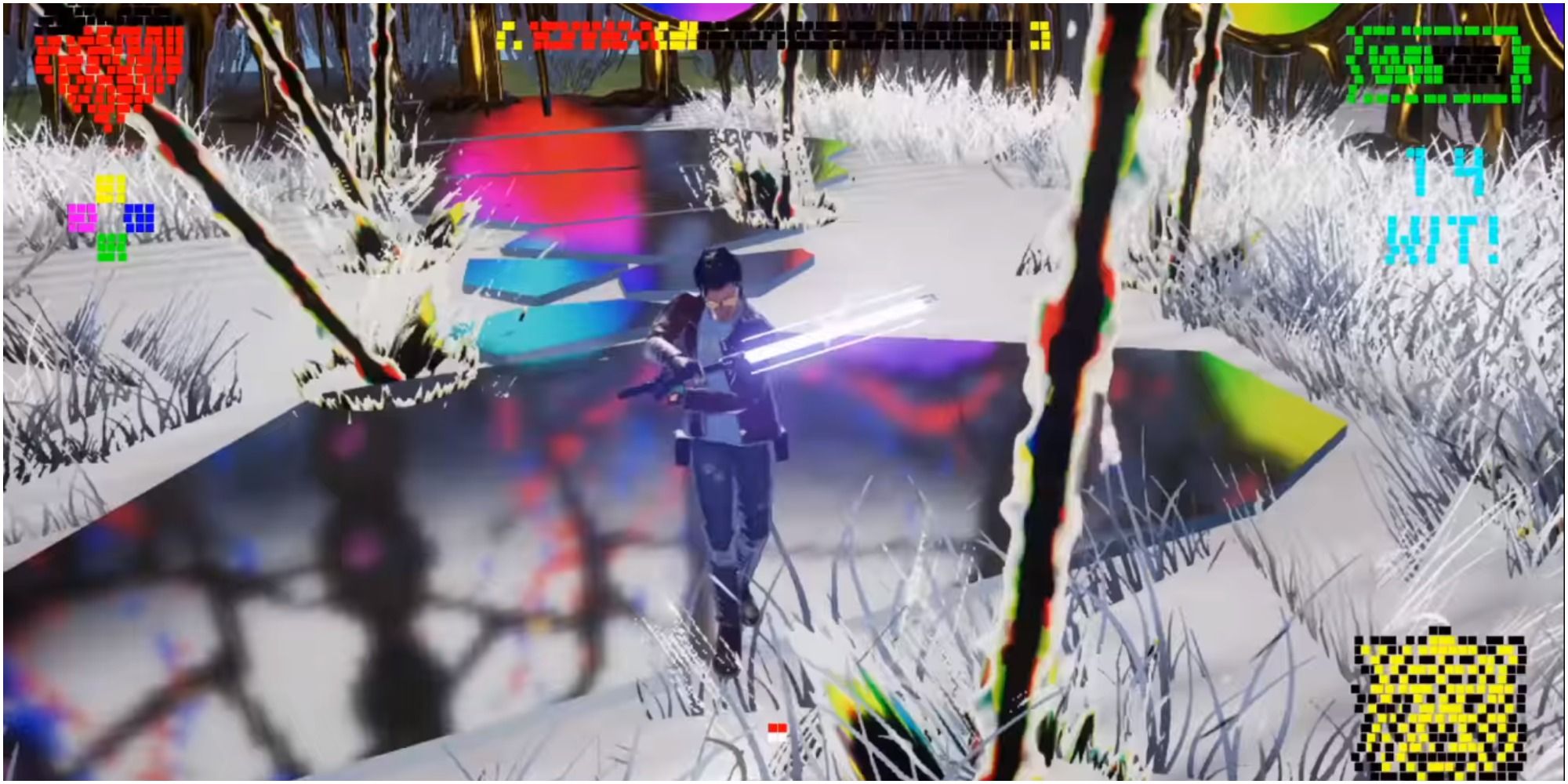 The second attack that FU does consists of Lasers that appear inside the room, which will slowly move around. Try to move through the lasers and avoid getting close to them at all costs.

If you are having trouble guessing which portal the hand will come out, then notice only the portals that are lowered on the walls. There will be a total of three portals that FU lowers each time before sticking his hand out of one of the portals.

After taking out each health bar, you will see side characters who Travis met through the game, helping him in defeating FU and destroying the Dome. Finally, when taking out the last health bar, you will see a cutscene where Travis, Bad Girl, and Shinobu Jacobs cut FU's head. FU will then try to escape back to his home planet in his spaceship, only to be blown up by Damon Riccitiello.