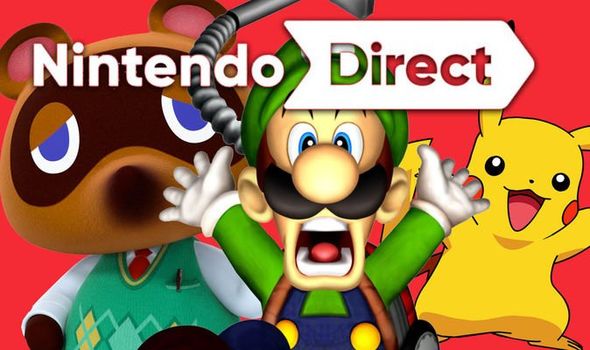 Nintendo Switch fans have been delivered some big news on when the next major Switch games reveal is taking place.

It had been rumoured that the House of Mario would be holding a Nintendo Direct for April 2019.

However, April is almost at an end and there’s been no big Direct presentation from Ninty.

It is possible that the rumour mill got the month wrong and instead a Nintendo Direct for May 2019 will be taking place.

There are plenty of upcoming Switch games that Nintendo will be wanting to promote which are coming out this year.

And a Direct is a perfect place to reveal more details on titles such as Animal Crossing Switch, Pokemon Sword and Luigi’s Mansion 3.

While it remains to be seen whether there will be a Nintendo Direct in May, fans do know the date of one upcoming Switch games presentation.

In their most recent investors briefing, Nintendo revealed that they will be holding a Nintendo Direct during E3 2019.

A date has not been confirmed for the Nintendo Direct that will be taking place during E3 2019.

All of the E3 2019 conferences confirmed so far are taking place on Sunday June 9 and Monday June 10.

So the Nintendo Direct during E3 2019 is likely to take place around then.

It remains to be seen what Switch games will get announced during the E3 Direct.

All these titles are slated for 2019 releases on Nintendo’s hit hybrid consoles.

And it’s likely there could be a few surprise announces made during the E3 Direct.

Could Super Mario Odyssey be getting new DLC this year? Is the much-rumoured Star Fox Grand Prix actually coming out?

And will Persona 5 ever come to the Nintendo Switch?

It had been hoped that the mysterious Persona 5 S project that developers Atlus previously teased was a Switch port of the JRPG classic.

However, this instead turned out to be a brand new game called Persona 5 Scramble.

Persona 5 Scramble is coming to the PS4 as well as the Nintendo Switch.

But this does mean hopes of a Persona 5 port for the Switch are all but gone?

Or is there still hope, with an announcement potentially being made during an upcoming Nintendo Direct?