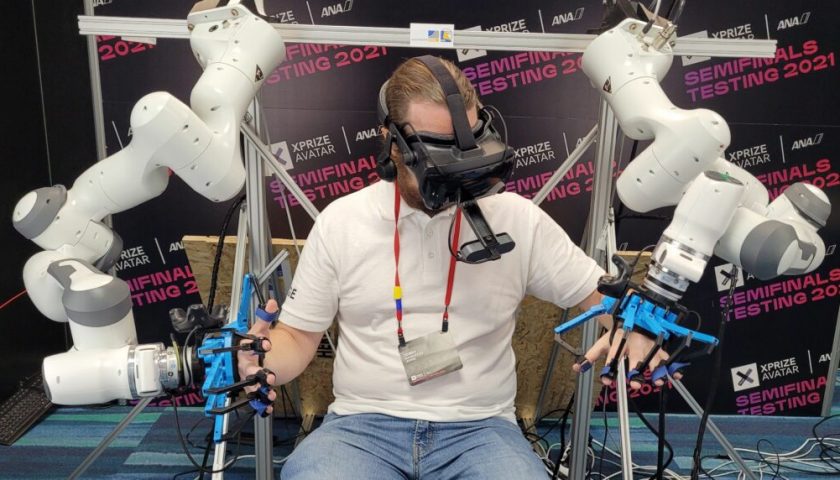 The $5 million Avatar XPRIZE was awarded to team NimbRo, which built a telepresence robot operated remotely via VR headset and exoskeletal hands.

The finals of the competition were held over the weekend in Long Beach, California, with team NimbRo from the Autonomous Intelligent Systems group at the University of Bonn, Germany, winning the $5 million grand prize. The videos embedded below show a brief overview of the project as well as the telepresence robot in action.

NimbRo features “dexterous five-finger hands” with the head of the robot “mounted on a robotic arm that gives it full freedom to move.” The operator uses a VR headset and is “equipped with two robotic arms and hand exoskeletons, measuring the operator’s arm and finger movements and providing force and haptic feedback,” according to a document outlining the finalists in the competition. Operated remotely by a judge, the robot needed to accomplish 10 tasks testing human-to-human connection, exploration and skill transfer. Tasks included activating a switch, using a drill to remove a door, and identifying objects of varying texture and weight.

“The operator face is captured by cameras and animated in the Avatar head to display facial expressions and gaze to the Recipient,” the document explains. “Our objective is to make Avatar robots more autonomous, such that they can perform everyday assistance tasks by themselves. The operator would only be needed to resolve the most difficult situations, creating additional training data in this way. In such a scenario, one operator would supervise larger and larger numbers of Avatar robots, which allows for fleet learning.”

You can see NimbRo accomplishing tasks in the video below with the operator/robot combination successfully accomplishing all 10 tasks in 5 minutes and 50 seconds — about half the time of the second place team.

Second and third places in the competition won $2 million and $1 million with Pollen Robotics from Bordeaux, France and Team Northeastern from Boston, Mass. taking those prizes.