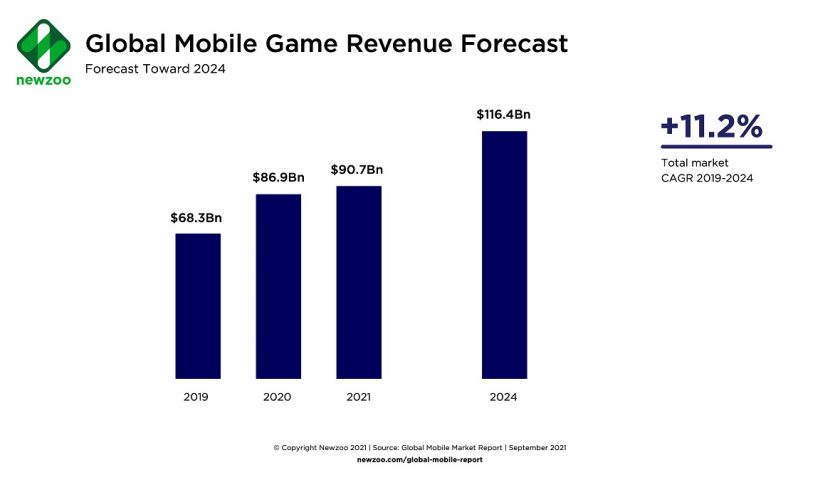 Mobile games will grow 4.4% in 2021 to $90.7 billion, according to the latest report from market researcher Newzoo and its research partner Apptopia.

That’s slower growth than the overall forecast period — Newzoo estimates the game industry will grow at a compound annual growth rate of 11% from 2019 to 2024 — in part because last year’s extraordinary revenue growth during the pandemic is very hard to beat this year. Overall, Newzoo expects gaming to hit $175.8 billion in 2021 and $200 billion in revenue in 2024.

On top of that, mobile game developers are dependent on data-driven insights enabled through smart tracking and targeting of users. Stringent (privacy-based) policies from Apple, Google, and regulators have created new challenges for developers, publishers, ad tech companies, and marketers.

Despite these challenges, the mobile market—and the games market within it—is more extensive, lucrative, and diverse than ever before. The total number of smartphone users will reach 3.9 billion worldwide in 2021, representing modest year-on-year growth of 6.1%. 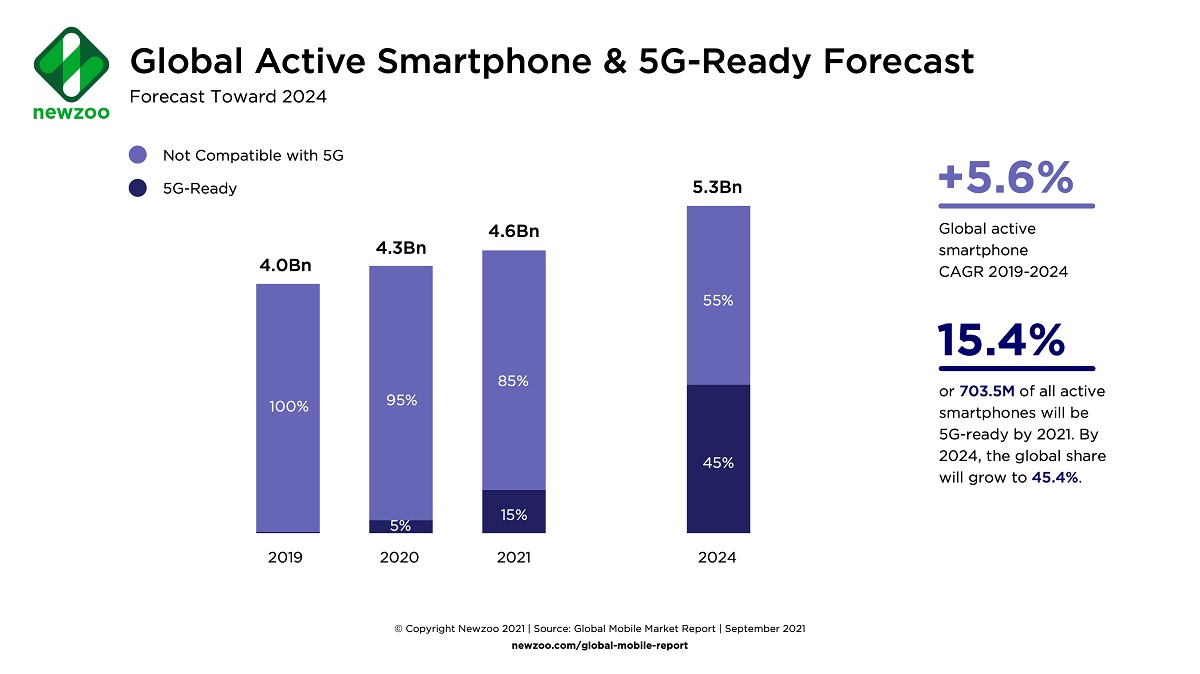 While growth will continue, mobile companies have been forced to shift their strategies amid the changing market due to tightening privacy measures across the board such as Apple’s changes to use of data from the Identifier for Advertisers (IDFA).

At the same time, the number of smartphone users worldwide is fast approaching the four-billion mark. The Asia-Pacific region accounts for over half of 2021’s smartphone users, primarily thanks to highly populated countries like China and India.

Due to growth in regions like Central Southern Asia, Sub-Saharan Africa, Latin America, and Southeast
Asia, the number of smartphone users worldwide will reach 4.5 billion by the end of 2024, a 6.1%
CAGR (2019-2024). As always, this growth of users—and the mobile gamers among them—will
trickle into game revenues.

Which App Store Accounts for the most mobile game revenues?

The global mobile games market will generate $116.4 billion in 2024, representing significant growth from 2019.

In the future, the forecasters expect Google Play and third-party-store game revenues to outgrow those on iOS. After all, Android’s popularity is continuing to flourish across the globe. And users in Android-
first growth markets are enjoying more disposable income, which some will spend on mobile games on their Android devices. 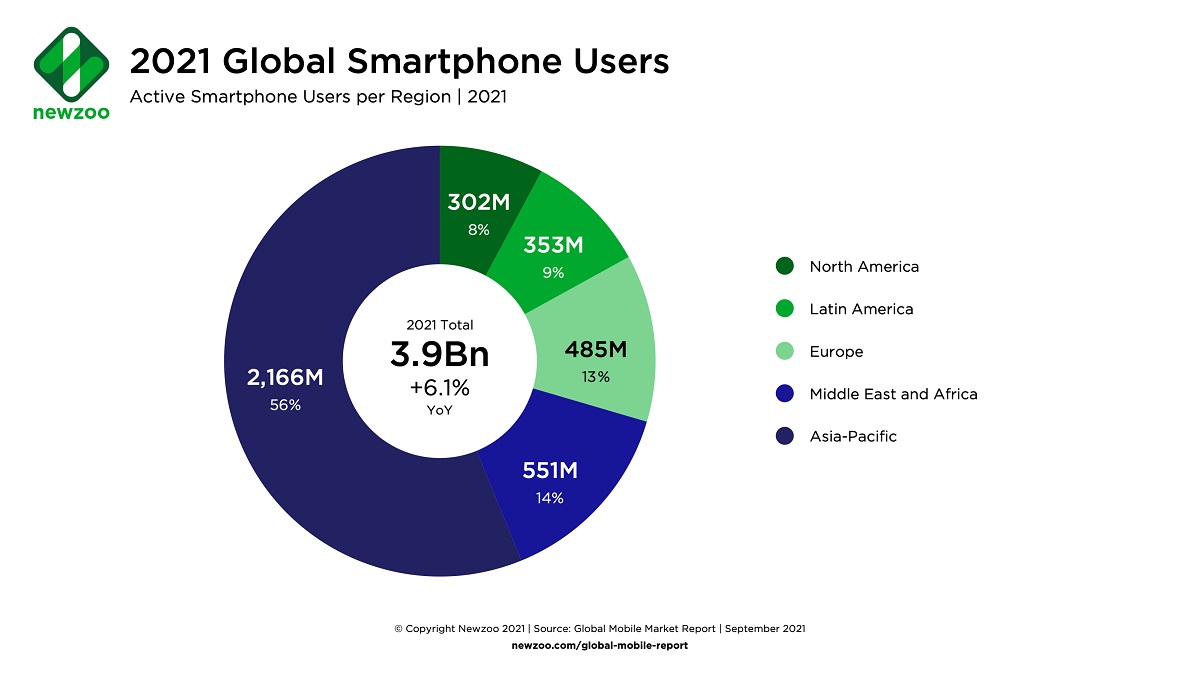 Above: Global smartphone users per region.

Epic chose to leverage its strong position with Fortnite in the games market to pressure Apple and
Google (especially the former) into loosening app store restrictions. Epic sued both companies for
monopolistic behavior.

But a federal  judge handed Epic a big defeat, ultimately ruling in Apple’s favor on nine-out-of-ten counts, penalizing Apple (via an injunction) for its anti-steering App Store policies for in-app purchases.
These anti-steering policies, which Google also recently implemented, prohibit app sellers from advertising alternate payment systems outside the platform holder’s ecosystem. The judge found that this hurt consumers by denying them ways to find out about lower prices for in-game items.

Newzoo expects developers will be allowed to charge less in external payment options for in-app purchases in the United States if Apple doesn’t appeal to the injunction.

Newzoo believes that developers would not need to pay Apple’s 30% cut in this scenario, giving the developers the fuller share of revenues (if they have external payment options in place). Based on my own reading of the Epic v. Apple verdict, I don’t think this is clear yet, as the judge ruled that Apple has the right to monetize its intellectual property.

Tianyi Gu, a Newzoo analyst, said in an email to GamesBeat that “developers would not need to pay Apple’s 30% cut in this scenario, giving the developers the fuller share of revenues (if they have external payment options in place).”

As developers would bypass the App Store, they may try to pass on savings to consumers,
incentivizing them to use third-party payments (rather than Apple’s), Newzoo said. Apple could therefore lose a significant amount of its App Store revenues if external payments options don’t cause too much friction for consumers, Newzoo added.

“As for the Apple vs. Epic lawsuit, opening up the payment ecosystem may have a positive impact on consumer spending especially in (emerging) markets where third-party payments dominate such as Southeast Asia and India,” Gu said. “In fact, limiting to Apple’s payment system may have caused friction for people to pay in these markets. However, with huge uncertainties around the ruling at
the moment (for example, how exactly developers will be allowed to communicate to users about external payment options; whether or not Apple will appeal), it is too early to make any measurable conclusion on the impact. Moreover, the ruling is only valid in the U.S. although we believe that Apple will be forced to open its mobile payment ecosystem across the globe, rather than juggling various policies across different markets.”

Still, it is costly for companies to build, maintain, and support a payment system that is safe and stable. Currently, only large developers can afford to build such systems in-house—or acquire the necessary tech via mergers and acquisitions, Newzoo said.

Payments companies such as Stripe and PayPal, which can provide payment systems for small and mid-sized developers, could benefit here.

Newzoo believes that Apple will be forced to open its mobile payment ecosystem across the globe, rather than juggling various policies across different markets. (That’s particularly likely if regulators around the world move to specifically enable alternative mobile payments. 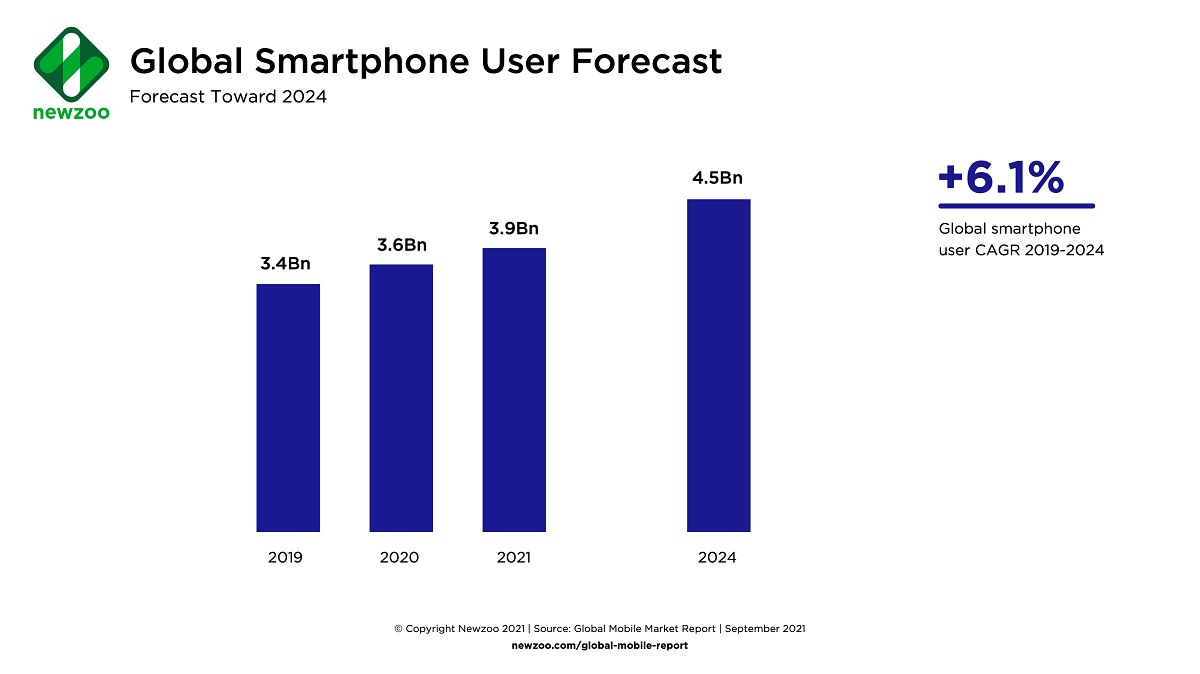 Newzoo believes that Apple’s and Google’s privacy changes will have a limited impact on consumer
spending across app stores. Newzoo will keep monitoring the impacts and update the forecasts
when necessary.

To offset the potential revenue loss, Apple will continue diversifying its business, especially towards expanding its own advertising network. On that note, the mobile advertising ecosystem is also facing significant disruptions, and Apple is again at the center, thanks to its App Tracking Transparency (ATT) project, which embodies the changes to the IDFA.

Newzoo believes that 85% of iOS users updated to iOS 14.5. And most users are not opting in to be tracked. According to Fyber, opt-in rates for ATT were just 17% globally as of mid-September. 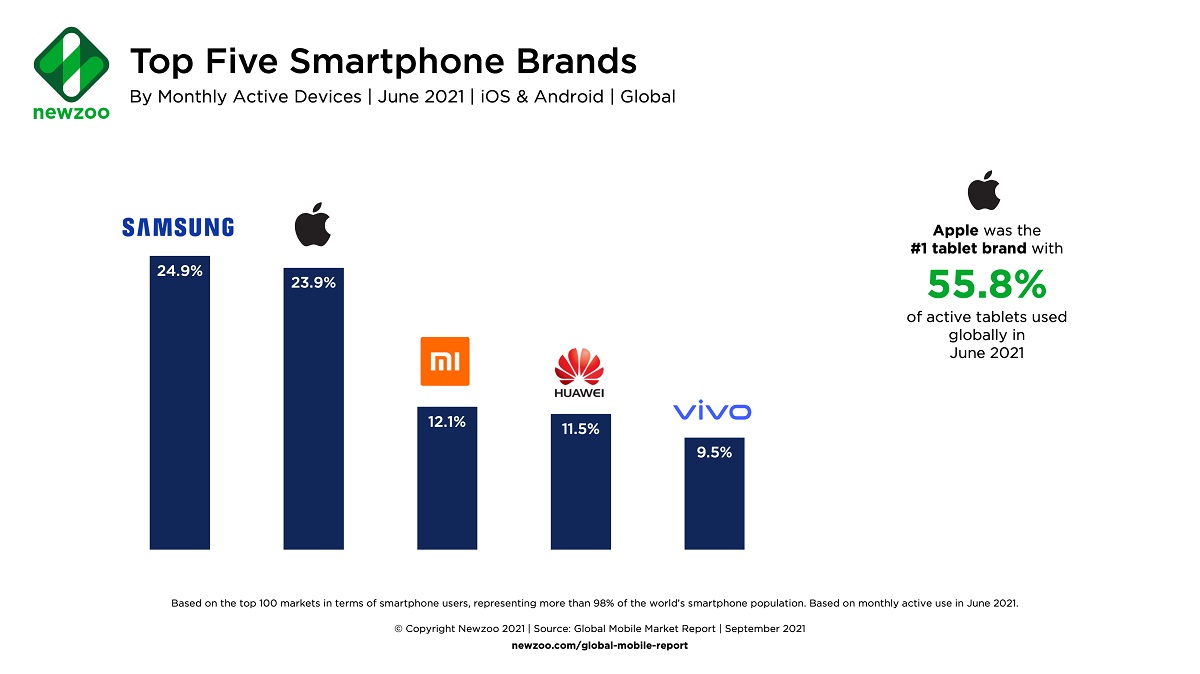 Above: The top five smartphone brands.

To retain some of the tracking ability they had, mobile companies are turning into content fortresses, and companies—including Apple itself—are doubling down on internal ad networks.

Gu said that when Newzoo mentions this “content fortress,” it is referring to proprietary ad tech systems that publishers use to cross-promote games within their own content portfolio.

“In other words, publishers are building in-house ad tech to leverage first-party data and promote new games within the content portfolio,” Gu said. “In this way, publishers can keep users within their ecosystem while complying with Apple and Google’s new rules.”

In the West, companies such as Zynga, AppLovin, and Facebook are allocating resources to
strengthen their content fortresses, primarily via merger and acquisition (M&A) activity. Tencent
and ByteDance are using the same tactic in the East (and globally), Gu said.

“We also expect an impact on user acquisition and marketing performance measurements that successful mobile publishers rely on to perfect their strategy, but this will be overshadowed on a global scale by other underlying growth drivers,” Gu said. “For example, a significant part of mobile games’ revenue growth comes from China, where Tencent and NetEase’s ecosystems are strong without IDFA. This reliance on first-party player data—for example, building a content fortress—is just one way mobile developers and publishers can work around the removal of IDFA.”

Understanding the impact of these changes—and how consumers might react to them—means exploring mobile gamers’ motivations, attitudes around in-game ads, and IP preferences.

In the end, these challenges mean mobile developers and publishers must continue to adapt to offset potential revenue loss.