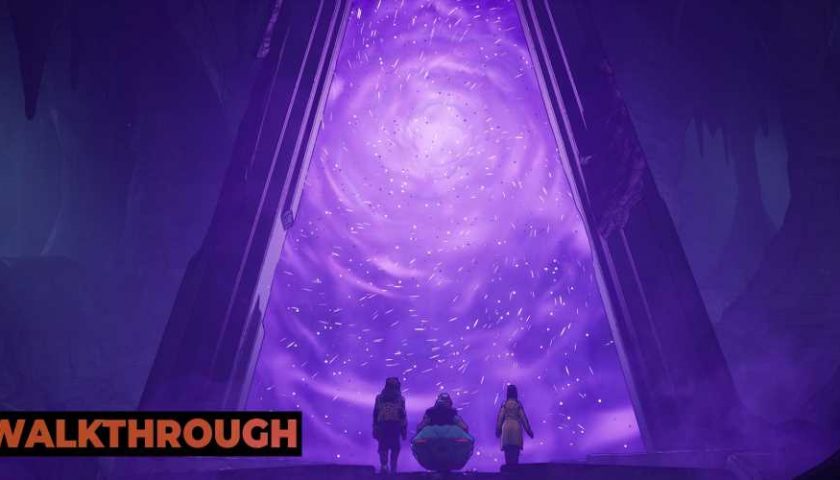 In the second episode – Disruptive Product – of the New Tales From The Borderlands, the story advances considerably. Following on from the previous episode, all the main protagonists meet up and establish a new goal of finding a Vault. They then head into the sewers to complete their objective.

This episode also introduces the concept of the skateboard score, which monitors the togetherness of the protagonist team. So, it's a very important episode. And it's one that contains a few big choices, several quick time events (QTE), and a single Vaultlander to collect. Here is how to get it all done. 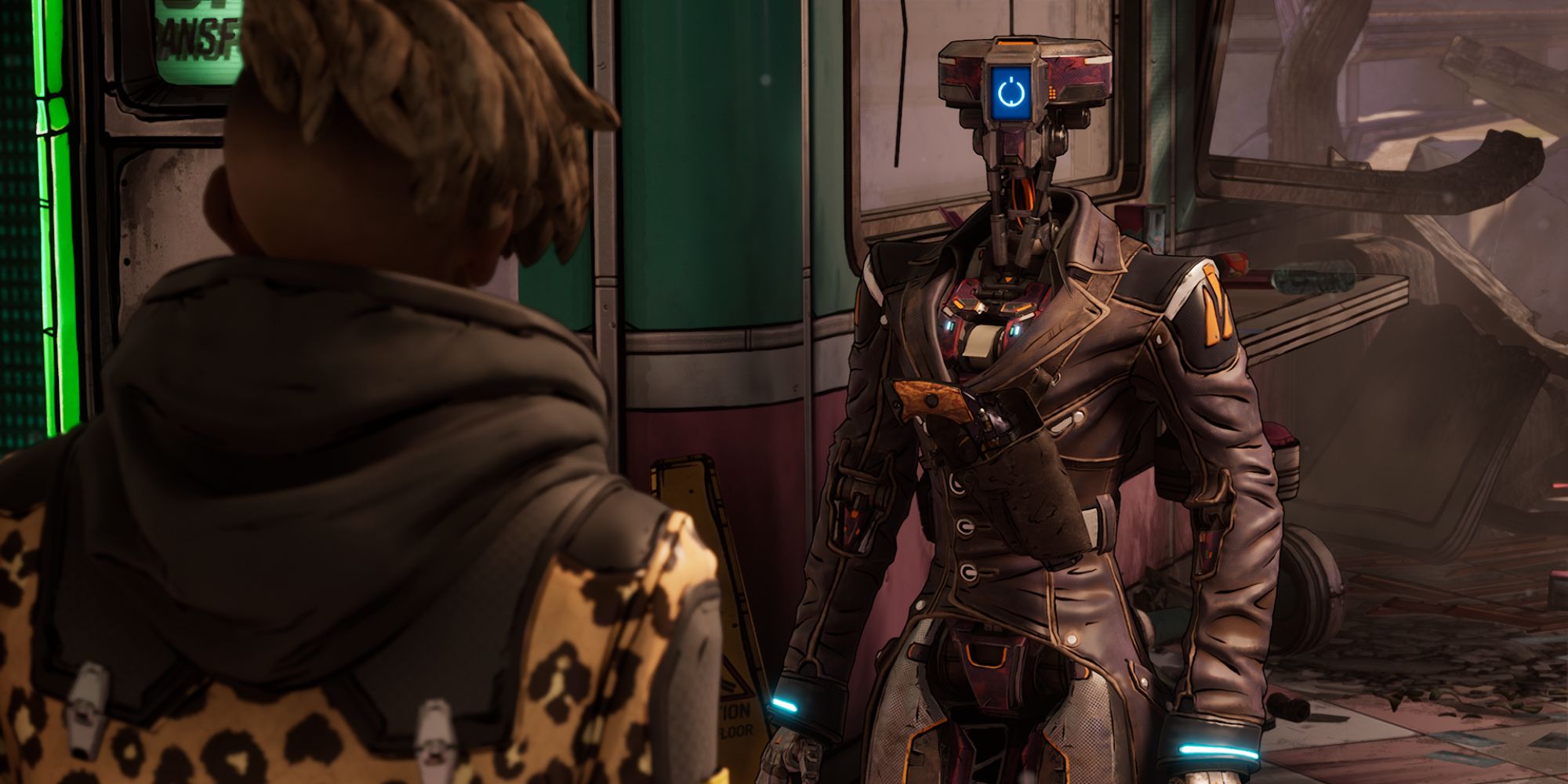 The first scene in episode two is very important from a narrative perspective. In it, all the characters meet and interact for the first time in the game. The dialogue choices you make between the three protagonists are significant, as they impact the team's skateboard score.

LOU13 explains the concept during the scene, but it's essentially a rating for how together the group is. And the score impacts the story and certain scenes. To get the best score possible, you generally want to make sure each of the characters is supportive and respectful of each other.

Outside of general conversations, the biggest choice in this sequence comes when the radio Octavio has in his pocket starts to go off. As it's a stolen device, the character doesn't want Anu to know he's got it.

So, as Fran, you can decide whether or not to lie for him. If you do, Octavio will make it seem like he just found the radio on the floor. Alternatively, if you say he has the radio, Anu won't be happy with her little brother.

Down In The Sewer (Also Includes A Vaultlander) 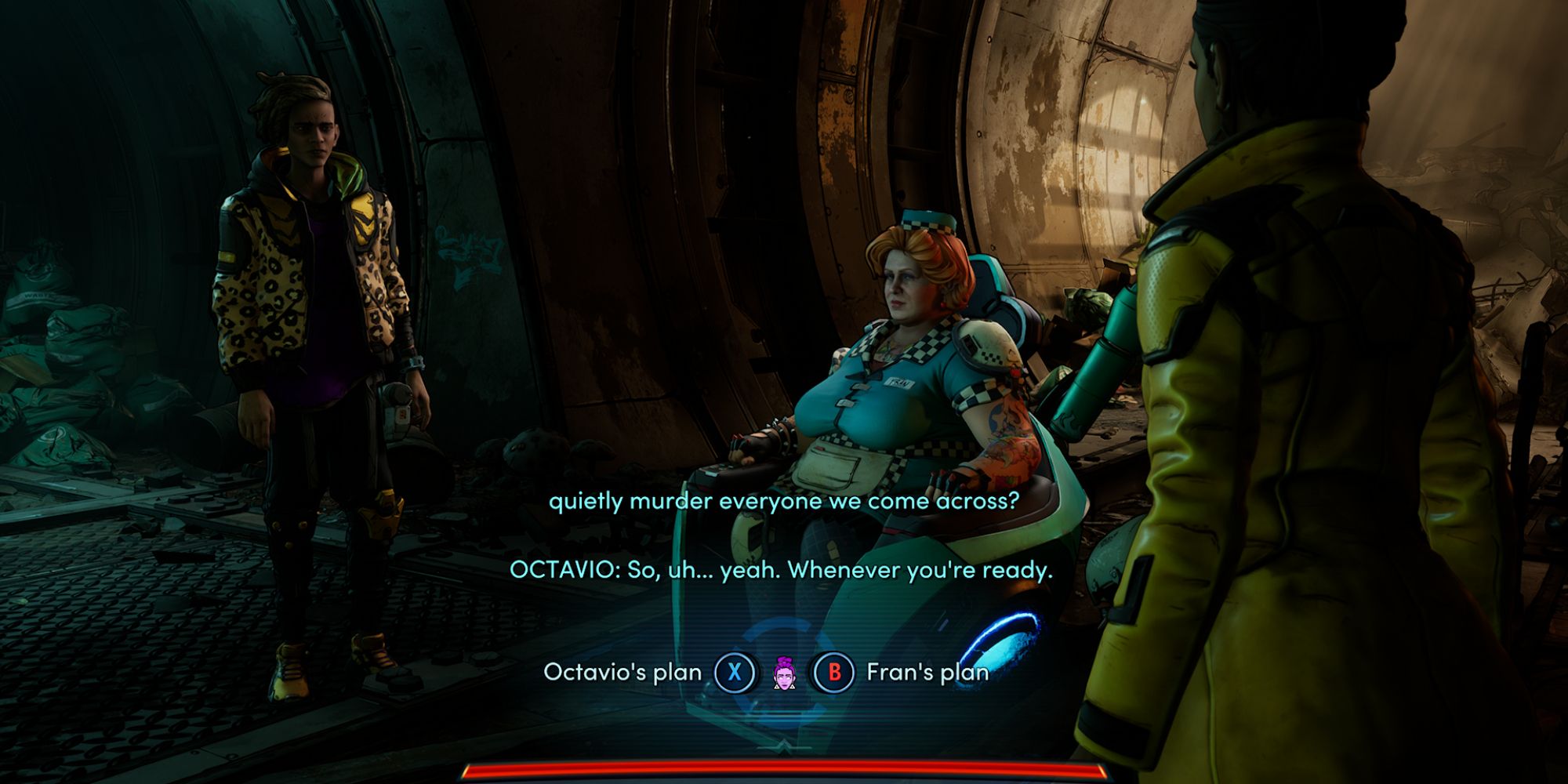 A few hours after the last scene, the team finally gets a lead in their search for the Vault Key. And it means they need to go into the sewer. Once down there, Octavio and Fran both want to proceed stealthily, but they have different ideas on how to deal with the guards. Octavio wants to sneak around them, while Fran prefers to take them out.

As Anu, you must decide whose plan to follow. Naturally, your choice dictates how you proceed in the level as well as Anu's relationship with the other characters – the person whose plan you don't pick won't be happy.

Whichever plan you go with, you need to get past the first guard by completing a QTE. Then a failed Metal Gear Solid tribute leads to a Vaultlander battle with the second guard. 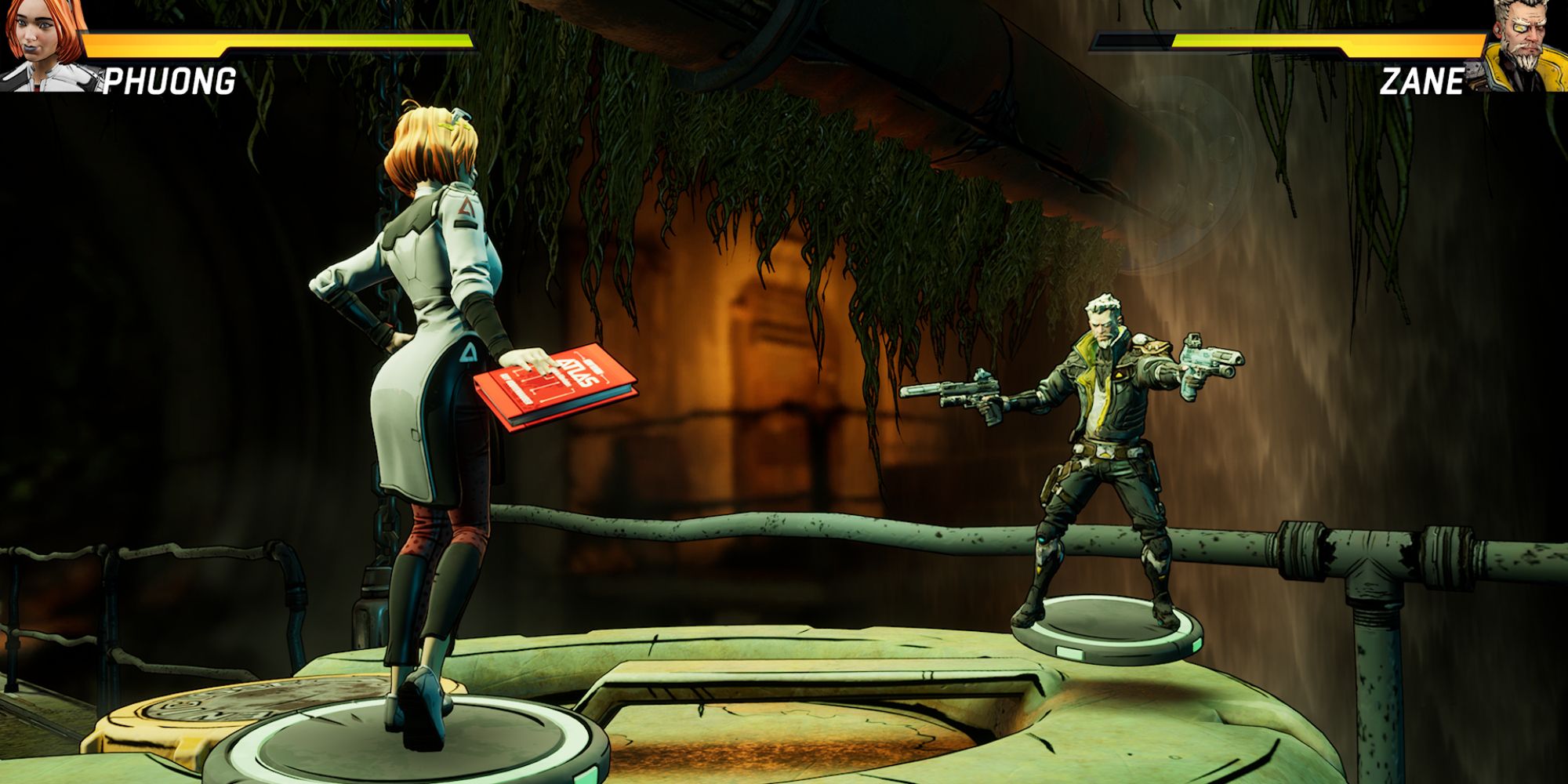 You must beat him to get past. Thankfully, it isn't hard to win the duel.

Choose your best figure and spam the attack button when you're on offense. On defense, pass the QTEs to dodge his attacks, and you should win easily.

Not only does winning let you progress, but you also gain your opponent's Vaultlander.

Getting To The Vault 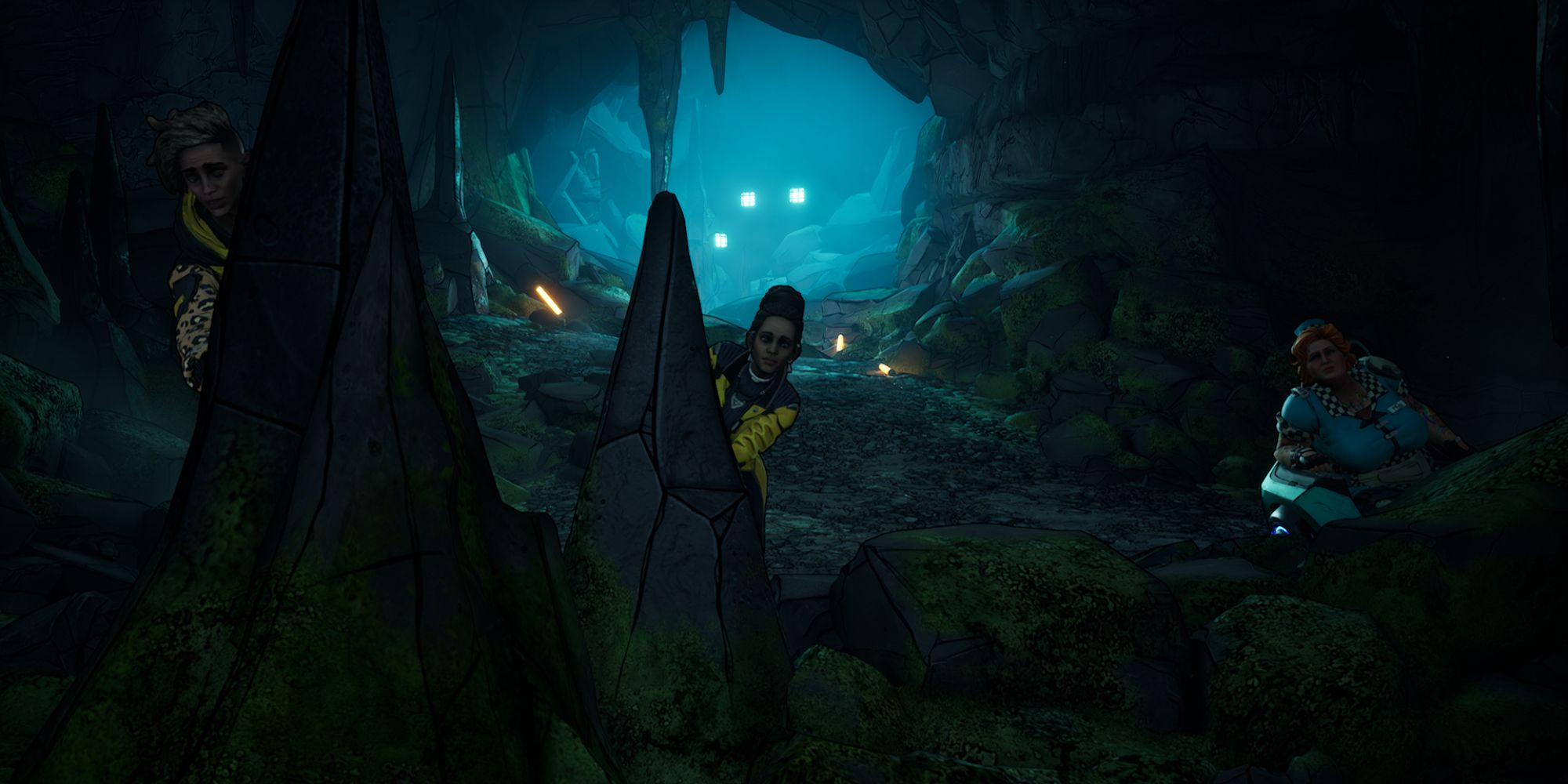 Following the fierce Vaultlander skirmish, you head deeper into the caves to find the guards with the Vault Key. Then you do a bit of stealth, which plays out as a QTE.

While you're hiding, the Tediore guys are attacked and killed by guardians. You manage to escape by passing another QTE. 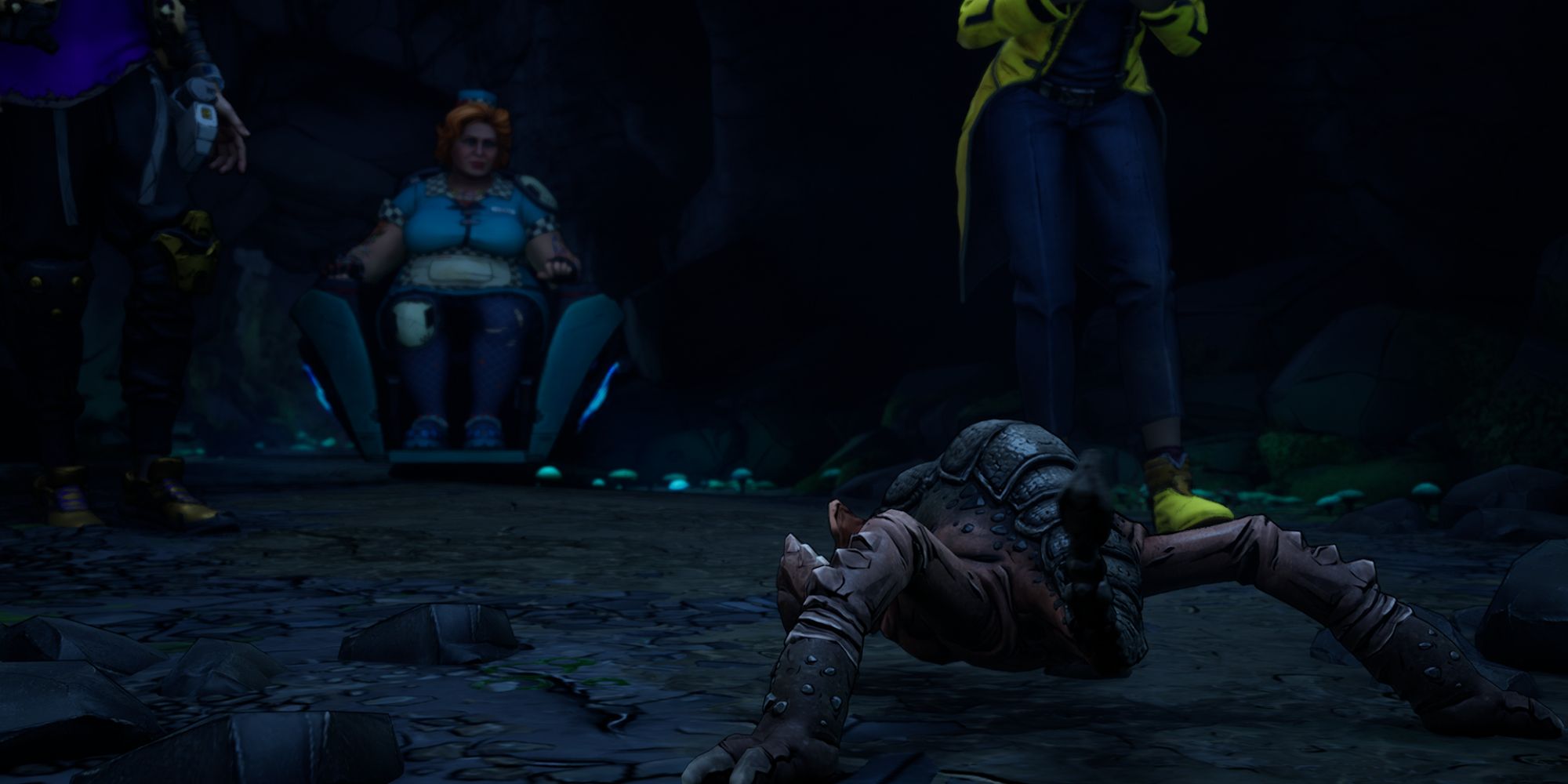 Paco's ratch, Juniper, then joins the crew, as her tunneling ability can help the characters progress. And she does her job well as she leads the crew to a portal.

When you get to the other side of the said portal, the game puts you in control of Anu. 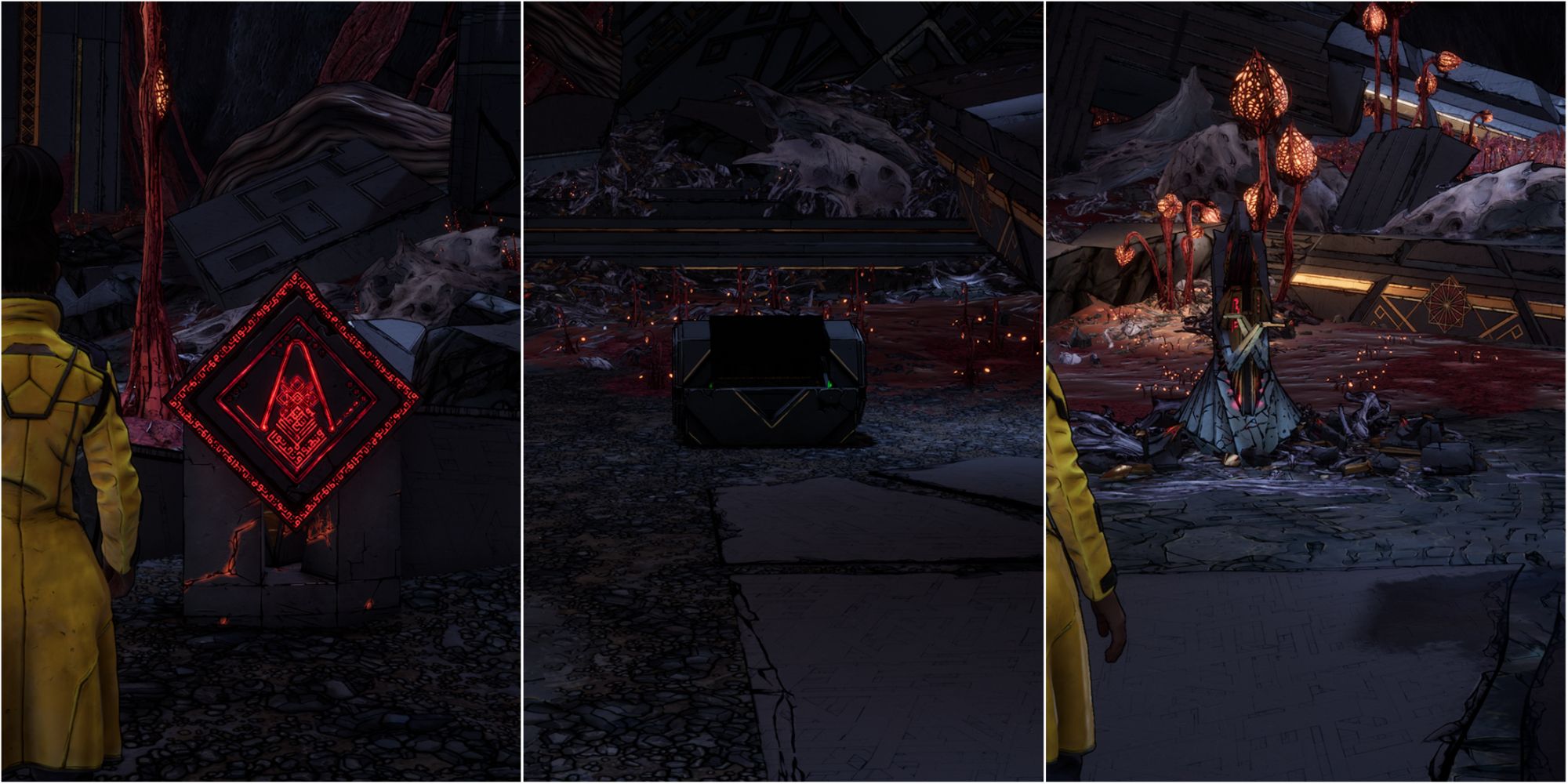 There are a few things in the area that you can scan with Anu's glasses:

Shortly after all the scanning is over, Octavio wakes up a giant monster known as The Devourer. 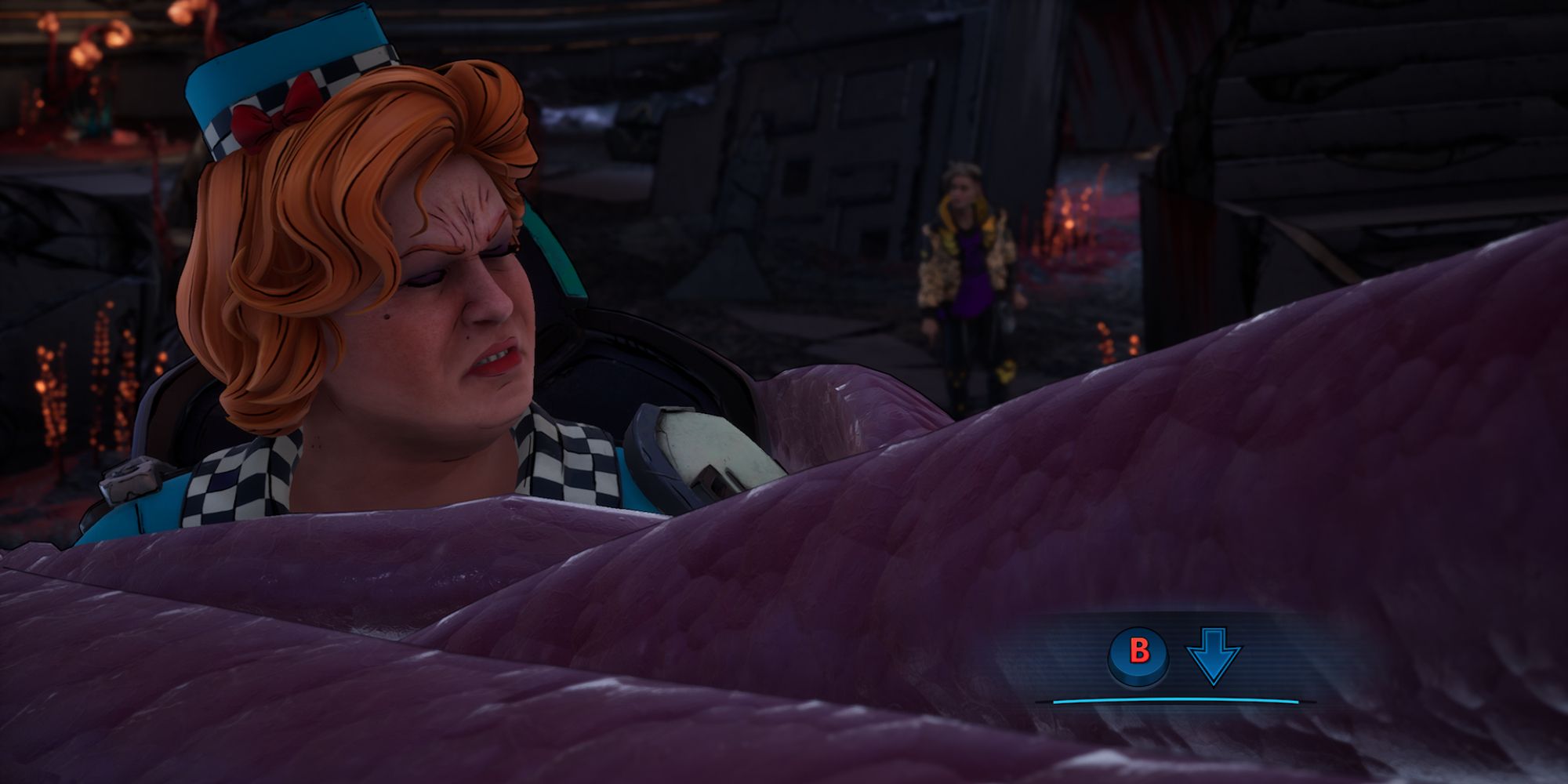 Juniper bravely tries to attack the monster, and her fate partially depends on how your team is doing. If you've got a high skateboard score, you can pass a QTE and save the little creature. However, if you have a bad one, she'll die no matter what.

After that, Fran gets grabbed, and you need to complete the QTE to save her.

You then get lucky as a spike drops down and kills the monster. However, it doesn't stay dead for long as it gets back up. 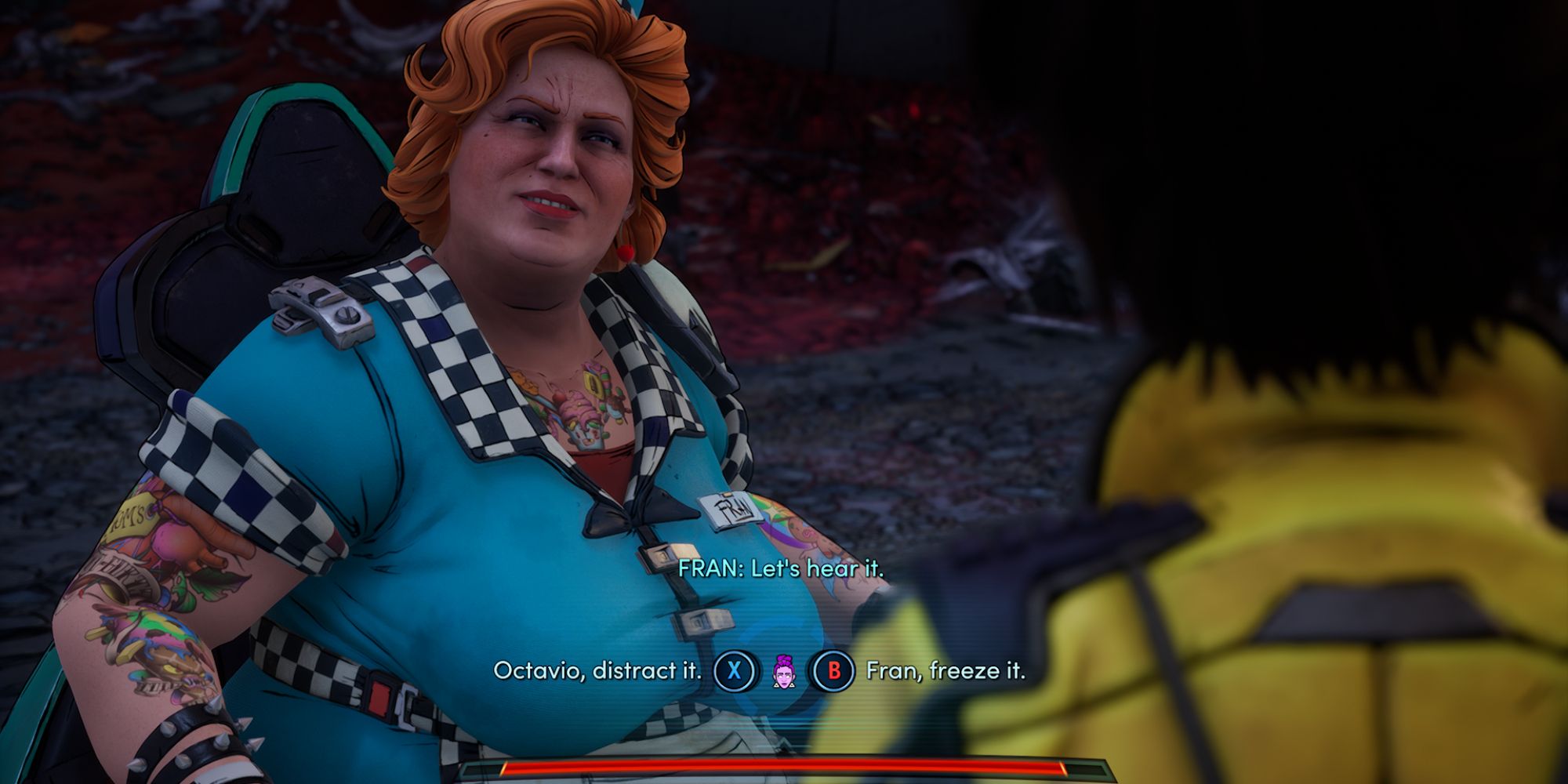 Now, you need to decide on a plan to deal with it. You can tell Octavio to distract the monster or have Fran freeze it. Your decision doesn't seem to matter, as both things happen anyway. 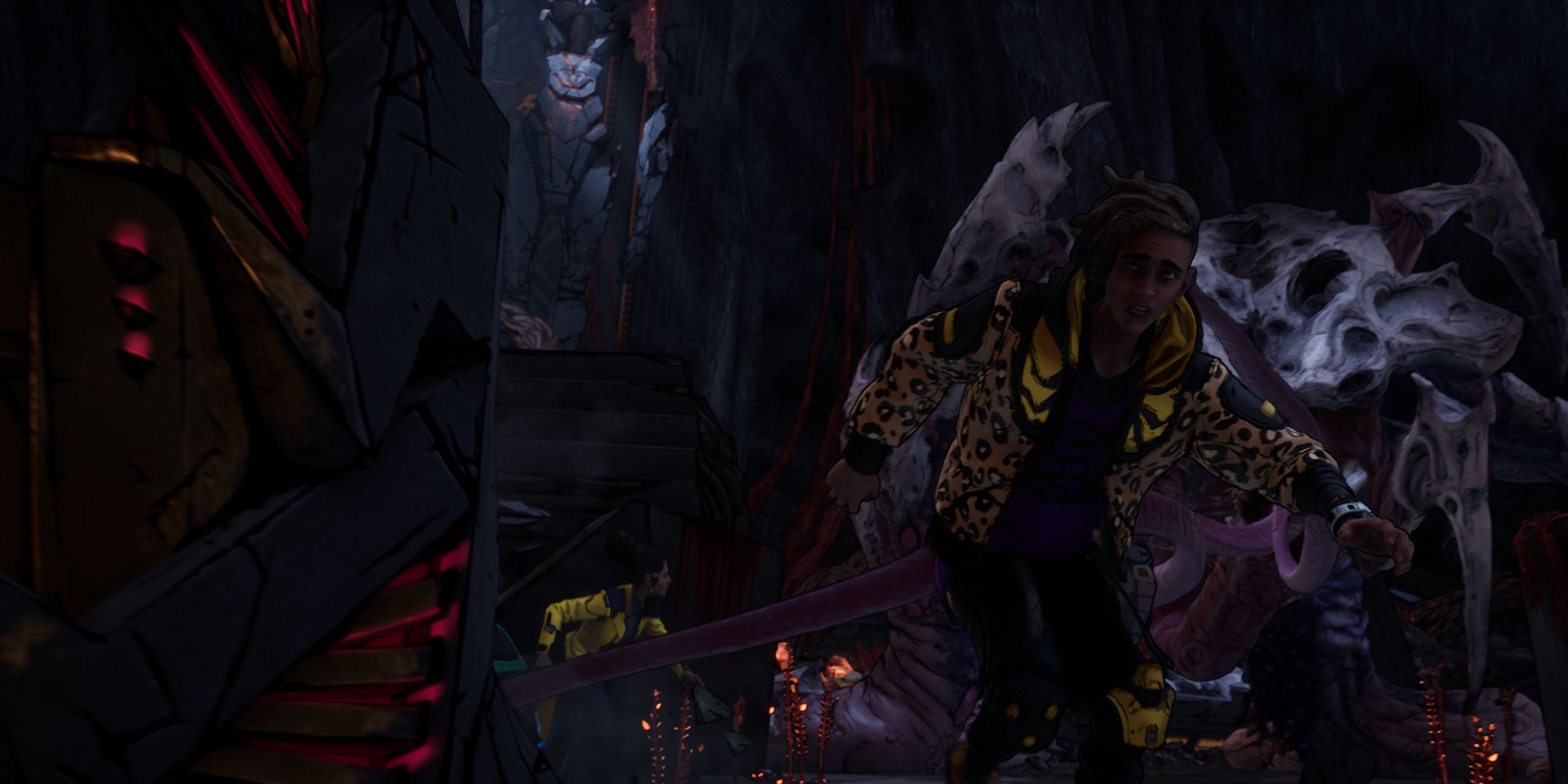 The plan results in a long QTE with a lot of button presses. 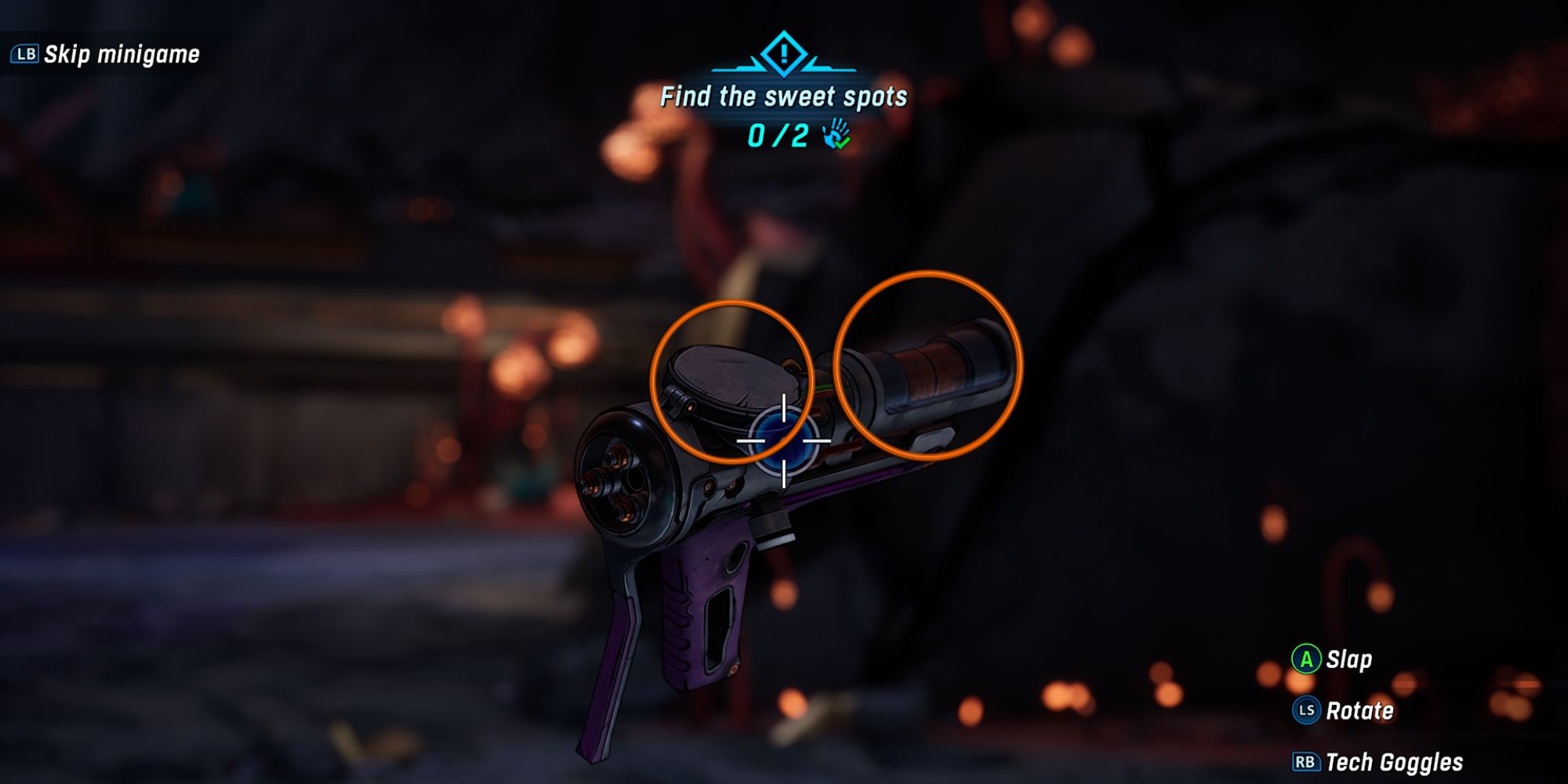 At one point, Anu needs to get her device working. So, rotate the item and slap the circular thing on top and the thing sticking out of the back. Afterward, a few more button presses lead you to victory.

Then a few more scenes play before the episode comes to an end.