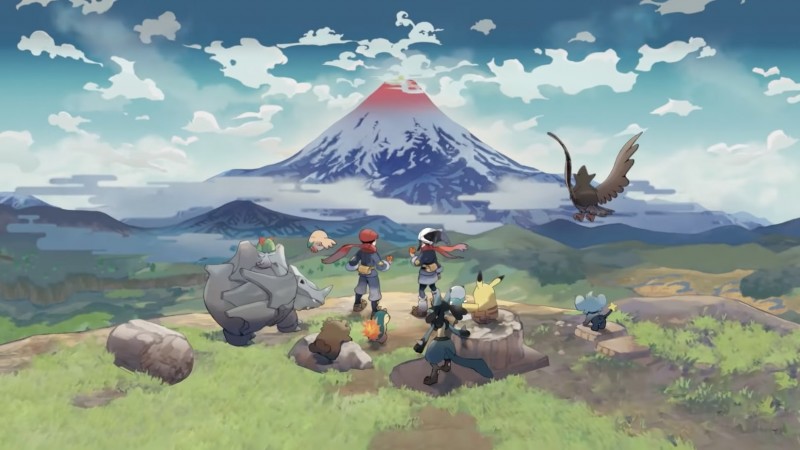 Nintendo and The Pokémon Company have released a new gameplay preview trailer for Pokémon Legends: Arceus and it’s a 13-minute look at what we’ll actually be doing in the game when it launches on January 28.

It offers the best look yet at this new take on the Pokémon formula, which is especially exciting because as of late, Nintendo has been churning out trailer after trailer showcasing essentially the same content. Not to mention, no official public hands-on previews have happened for this game so we don’t even know what playing Arceus feels like. However, today’s gameplay preview video provides some answers to a lot of the questions we had.

The trailer doubles down on the open-hub nature of the Hisui region, citing that each biome has different Pokémon to catch, terrain to traverse, and raw materials to gather. These raw materials can be used to craft items such as healing items, lures, smoke bombs, Poké Balls, and more, and the narrator says your Pokémon can help you find these materials too.

Different Pokémon appear based on the time of the day and weather conditions. Plus, different species have different temperaments. Some are skittish and might run away. Others are aggressive. If a Pokémon detects you, it will be in an alert state and it will deflect all Poké Balls you throw at it. In order to catch an alert Pokémon, you’ll need to battle it with one of your own.

You can distract Pokémon with things like food, too. Also, if you encounter aggressive Pokémon, they might immediately attack you and if you take too much damage, you’ll blackout and lose some of the items you were carrying.

As part of the Survey Corps, your job is to fill out the Pokédex. This doesn’t just consist of catching Pokémon – that will only get some of the survey report filled out. You’ll need to witness them doing certain moves or observe them at different parts of the day to learn more about the species and ultimately, complete their Pokédex entry.

Because of how large the Hisui region is, you’ll have access to special “blessed” Pokémon that you can ride on. For example, you can ride Wyrdeer to navigate land faster, but you can also immediately hop onto the back of a Hisuian Braviary to fly through the skies, Omega Ruby and Alpha Sapphire-style. Basculegion lets you skim through the rivers and seas of the Hisui region, too.

Jubilife Village is the center of operations for the Galaxy Expeditions Team, which is a group of people who have set up camp in the Hisui region to learn about it and the Pokémon within. They’re made up of the Survey Corps, Security Corps, and Medical Corps. Jubilife is your home base and it’s here you’ll collect tasks and turn in completed ones. You can also purchase crafted items and clothes here, and trade Pokémon with other players here, too.

Part of the gameplay loop of Arceus is completing missions and requests. The latter are small tasks to help the people of Hisui while the former is how you progress through Arceus’ story. You can use your Arc Phone in a very Sheikah Slate-way to set waypoints, map out the region, and more as well.

As expected, battling in Pokémon Legends: Arceus is turn-based, like the traditional Pokémon games. However, there’s a twist in the form of different move styles. If you use an Agile-Style move, it raises the user’s action speed, which means their next move might happen sooner but the move will be weaker. Strong-Style moves, on the other hand, cause your Pokémon to sit out for a move and in return, hit stronger the next time they attack.

Alpha Pokémon will be tough to battle but easily spotted thanks to their large size and glowing red eyes. Catching them will be tough, but it will be worth it.

You can customize your character with a variety of clothing items at the Clothier in Jubilife Village. As you progress through the journey of Arceus, you’ll unlock more and more items including hairstyles, shirts, pants, and more.

Noble Pokémon are special frenzied creatures that rampage across the Hisui region. They’re easy to spot, too, as they glow gold. These are essentially boss battles. Depleting their health won’t end the fight. Instead, you’ll need to throw special balms at them made of their favorite food. In between throwing balms, you’ll need to dodge its attacks to survive.

At some point during the fight, the Pokémon will reveal an opening and then you can attack. Now, you have to actually defeat it in battle before you can finally catch it. The narrator promises that these will be some of the toughest battles in the entire game.

And that’s where the video ends. Pokémon Legends: Arceus will hit the Switch on January 28. While waiting for its release, catch up on some of the recently-released trailers, starting with this Pokémon Legends: Arceus trailer that introduces the Diamond and Pearl clans to the game. Watch this trailer for a better look at the environments, NPCs, and Pokémon we’ll be catching after that, and then watch this one for a better look at the crafting in the game.

Are you excited for Pokémon Legends: Arceus? Let us know in the comments below!