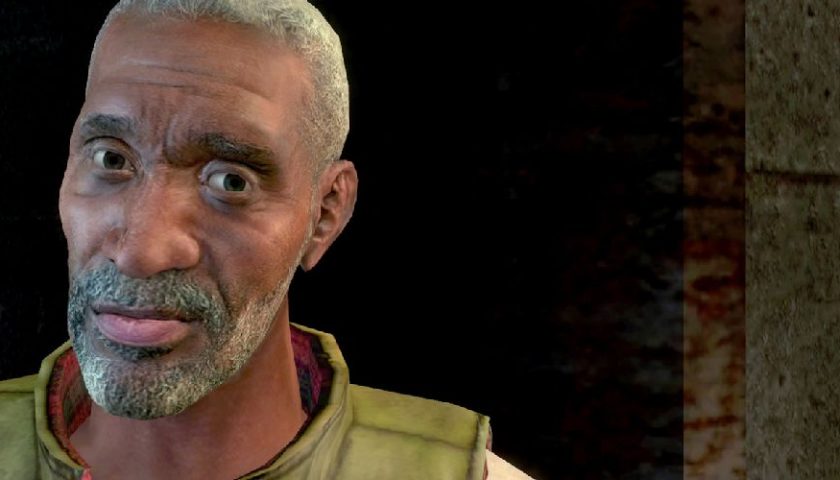 A few weeks back, we got to see Half-Life 2’s Gravity Gun in prototype form courtesy of leaker Richter Overtime. The prototype weapon had a more ‘60s sci-fi feel than the eventual Gravity Gun, with more exposed and rounded wiring to better suit the original concept art of Eli Maxwell. This cut character would eventually fuse with another cut character to form the lovable Eli Vance.

Now, we’re learning even more about Eli Vance’s early days thanks to Richter Overtime, who just posted a naked model of Eli showing more of his prosthetic implants.

Eli’s prosthetic leg, modeled after Flex-Foot line of prosthetics designed by biomedical engineer Van Phillips, is well known. What’s less well known are the parts of Eli’s torso that have seemingly been replaced or augmented by artificial components alongside two bands on each arm. There are also several implanted sensors with wires running across Eli’s chest.

Eli lost his leg while trying to sneak into City 17. While attempting to boost Isaac Kleiner over a barrier, a Bullsquid attacked and consume Eli's leg below the knee. How Eli received his other injuries is a bit of a mystery. It's possible that the Black Mesa Incident is to blame, leaving him with heavy burns requiring some sort of synthetic replacement. Or it could be due to some other misadventure while leading the City 17 Resistance. Or there was no story and Eli's character model was simply covered in clothing so that the player would never be able to actually see the extra prosthetic material covering his body.

In addition to our first good look at naked Eli Vance, Richter also offered up an early model of Dog, the robot companion Vance made to protect his daughter Alyx. Strangely, it seems to have more of a feline look to it than the Dog we all know and love. There are also a few scrapped enemy concepts, such as the Antlion King boss, an earlier Alien Assassin/Breeder 3D mesh, and concept images for a Combine Guard and Birther.