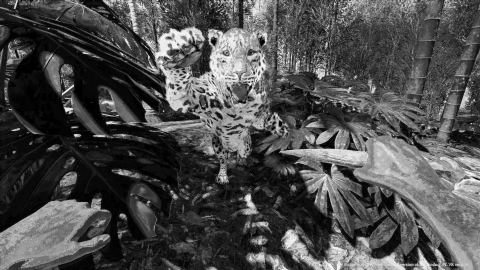 New footage of the upcoming Green Hell VR shows both the Quest 2 and PC VR versions of the game.

Firstly, developer Incuvo recently posted this look (or listen) at the game’s sound effects, along with a glimpse at the physics system. All the footage in this video was captured from the Quest 2 version of the game.

Alongside the sound effects, this video shows some other impressive interactions in Green Hell VR. You’re able to cup your hands to grab water, for example, and the physics system allows you to hang objects off of each other, or scoop up baskets and other items with a machete.

Meanwhile, another video posted in January gives us a more direct look at the PC VR version of the game. This clip is instead focused on the landscapes of Green Hell VR, taking us through leafy forest environments.

We also get a look at some traversal, which sees the player jumping up cliffs, and you can spot some of the wildlife you’ll encounter in the game too. Visually both versions of the game look pretty close together at least based on this footage, though we’ll save a final judgment for when we can play the real thing.

All-in-all the game’s still looking pretty promising. Green Hell VR is due to release in early 2022 on both Quest and PC. Given we’re in February, that hopefully means we can expect some release news soon.

Are you going to be picking up Green Hell VR? Let us know in the comments below!