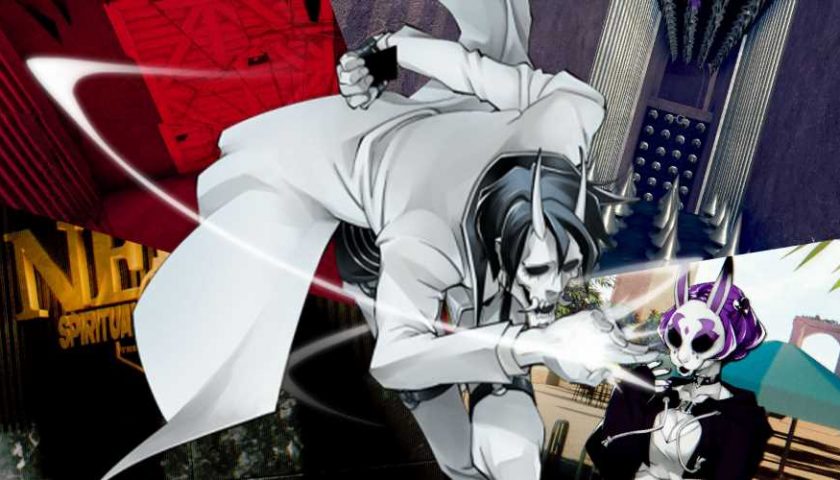 Like the fanged mask covering its hero's face, Neon White looks significantly more dangerous than it actually is. The omnipresence of a timer above this first-person shooter/platformer's action heavily encourages attempts at speedrunning. Add in that it slots your time in alongside other players' times from around the world on a global leaderboard, and it really feels like the game should be more difficult to pick up and play than it actually is.

As YouTube video essayist Jacob Geller noted on the most recent episode of The MinnMax Show, Neon White — when taken in as a whole — appears more complex than it is. If you watch a friend play over their shoulder, you might be overwhelmed because making it from the beginning of a level to the end involves a twisty combination of running, jumping, double-jumping, and shooting, all while managing the deck of cards containing your available arsenal at the bottom of the screen. When I say the phrase "deck-based FPS" you might instantly feel stressed out at the perfect dexterity it sounds like you would need to enjoy the game, let alone conquer it.

Despite its initial complexity, Neon White is easy to come to grips with on a mechanic by mechanic basis. The lightning-fast traversal is intuitive and rarely requires that you make precise landings on precarious platforms. The shooting is responsive and the hitboxes around enemies are forgivingly big. And, as long as you finish the level (score be damned), you can move on to the next one. Like Celeste before it, Neon White's hardcore bark is worse than its bite. 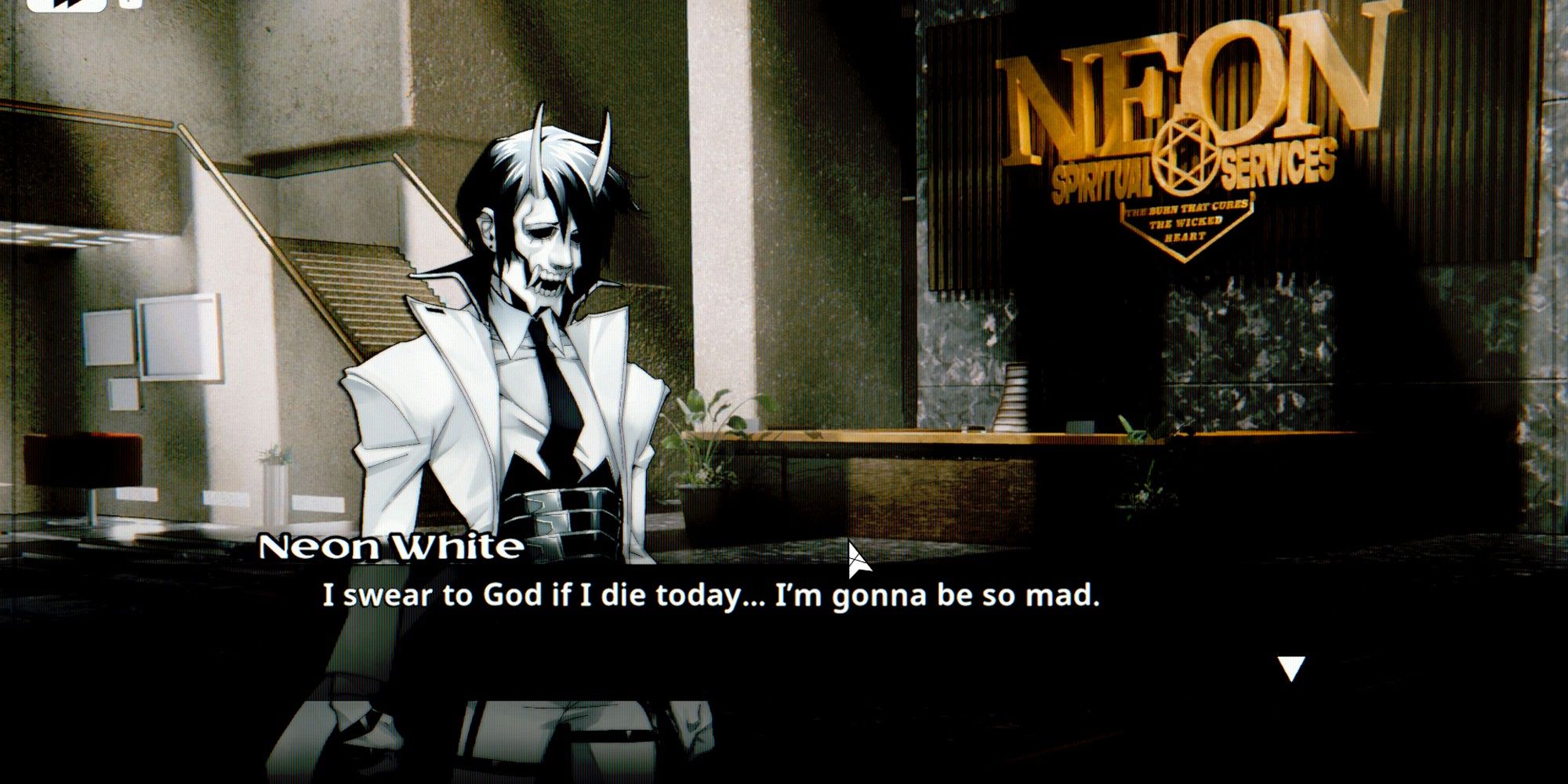 Most of the time, that is. In Neon White you play as a sinner brought to Heaven after death to take part in a competition to see who can kill the most demons. The mask covering your human features serves double duty as a bomb that will blow you away if you attempt to make a run of it. Effectively, it's Suicide Squad by way of 2000s-era anime and vaporwave and it rules. The bulk of the game is spent on campaign missions where your character, White, and the other Neons set off on demon-slaying missions given by Heaven's bureaucratic angels. But, in between those sorties, the game also offers a selection of side quests which don't unlock unless you give gifts to your fellow sinners. To do so, you need to track down the hidden presents in each level, then take them to the corresponding Neon. Both getting and giving the gifts is optional.

These sidequests up the difficulty in a variety of different ways that seem to represent some aspect of the character giving you the assignment. In Neon Yellow's missions, discarding weapons is prohibited. That means you need to figure out how to navigate the level without the assistance of the pistol's double jump, the machine gun's bomb, the sniper's boost, and so on. This fits with the simple-minded and easygoing way that Yellow presents himself. Why bother thinking about a second use for my gun? It can shoot stuff. That's good enough for me, bro! 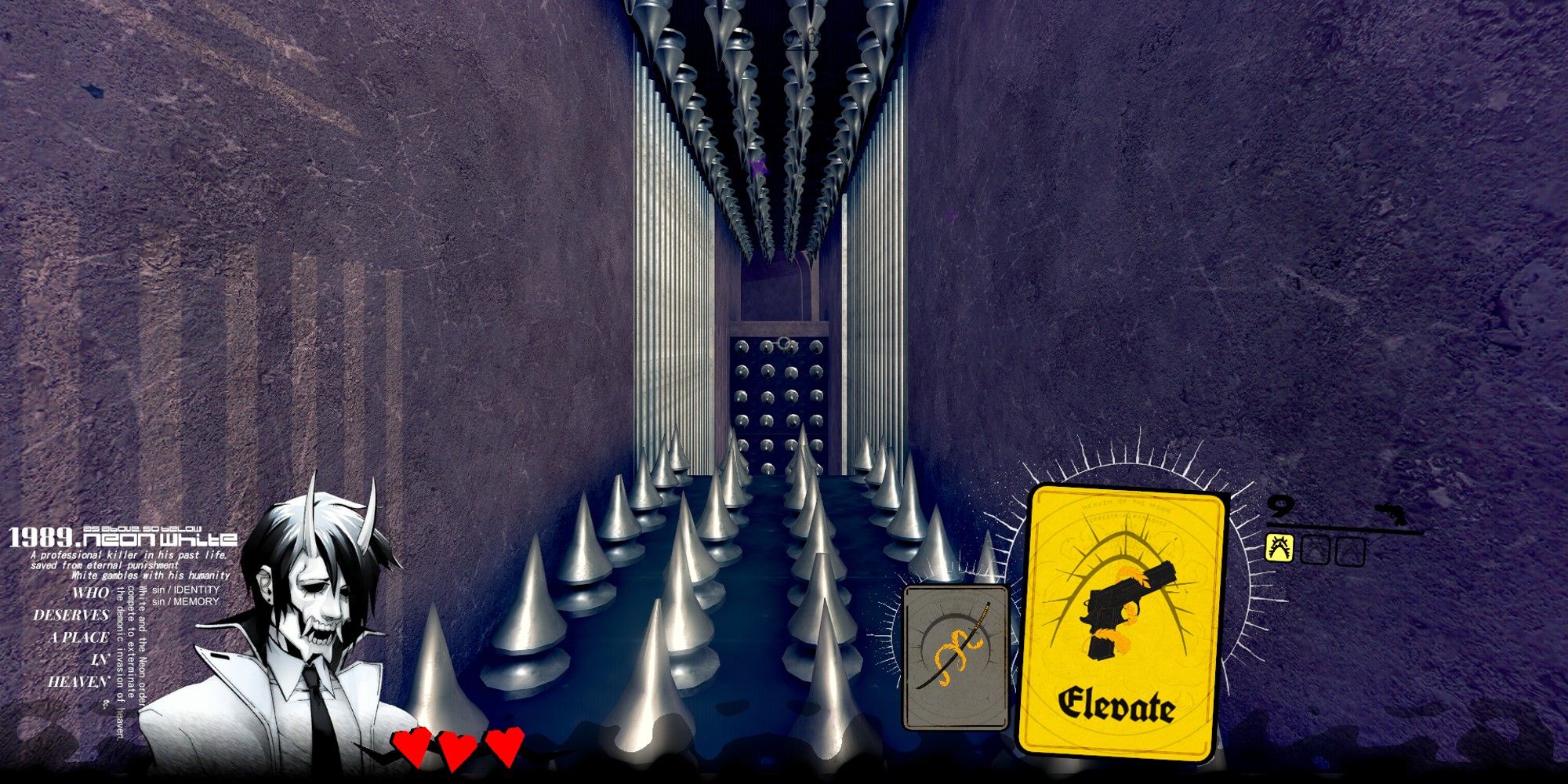 On the other hand, if you try Neon Violet's side quests, you'll be confronted by spike-covered levels where jumping too high, moving too far to the side, or thoughtlessly boosting into a balloon will leave you impaled. Though Violet initially comes off as cute and innocent — her mask is a bunny's face — conversations with her frequently turn to morbid topics. She likes cute stuff and blood and guts equally. Her levels bring her violent fixations to the fore.

Like Celeste's B-Sides, which tasked Madeline with navigating significantly more difficult versions of the default levels, Neon White hides its most serious challenges off the beaten path. Players who are just here to see how the story plays out can ignore these slightly more brutal levels. But, if you really love Neon White's traversal and want a bigger challenge, the side quests are there for you. This is part of Neon White's broader attempt to give players the ability to tweak the difficulty without actually including difficulty options. You can go for Ace in every level, but you only actually need to finish it to move on to the next one (though you do need a certain amount of Gold medals to move on to the next set of missions). You can seek out every gift. You can play every side quest. Or, you can just play the main stuff until you get the Gold you need and move on.

Personally, I think the story and gameplay both rule, and you should pay attention to both. If you disagree, sorry, but your Neon name would be Neon Vanilla.