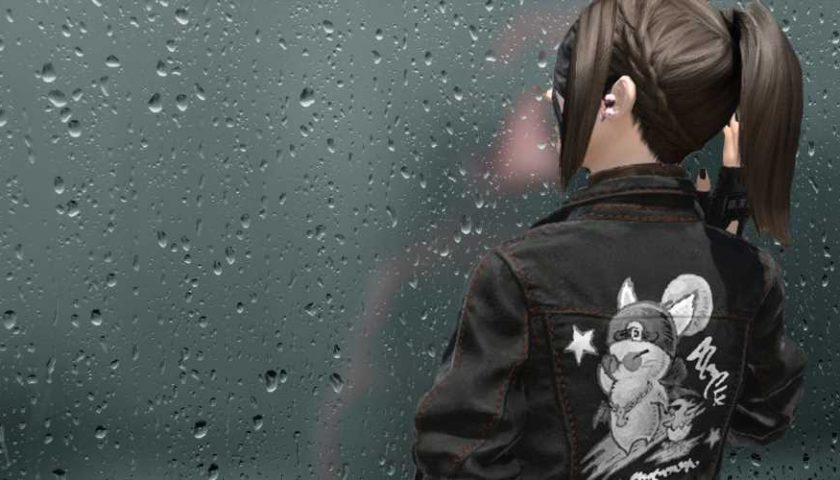 You know that meme of Kermit the Frog sadly staring out the window on a rainy day? That’s how I feel when I return to my empty Free Company house in Final Fantasy 14, glance at my inactive chat log, or dare to peek at my rather dead friends list.

Last year, I wrote about how my old friends have left the game, leaving me as the only person alive and kicking in our FC house, which is perched on a hill, making me feel like some strange recluse that looks out over everyone else living their virtual lives. For a game where other players constantly surround you, it can get pretty lonely without any companions to enjoy it with.

Sure, I can still partner up with randoms for duties and other things, but I miss the more social interactions of chatting about nonsense while you’re running around and completing various content. I’ve tried picking up Linkshells and Crossworld Linkshells, but they always end up just as quiet as my already empty FC. 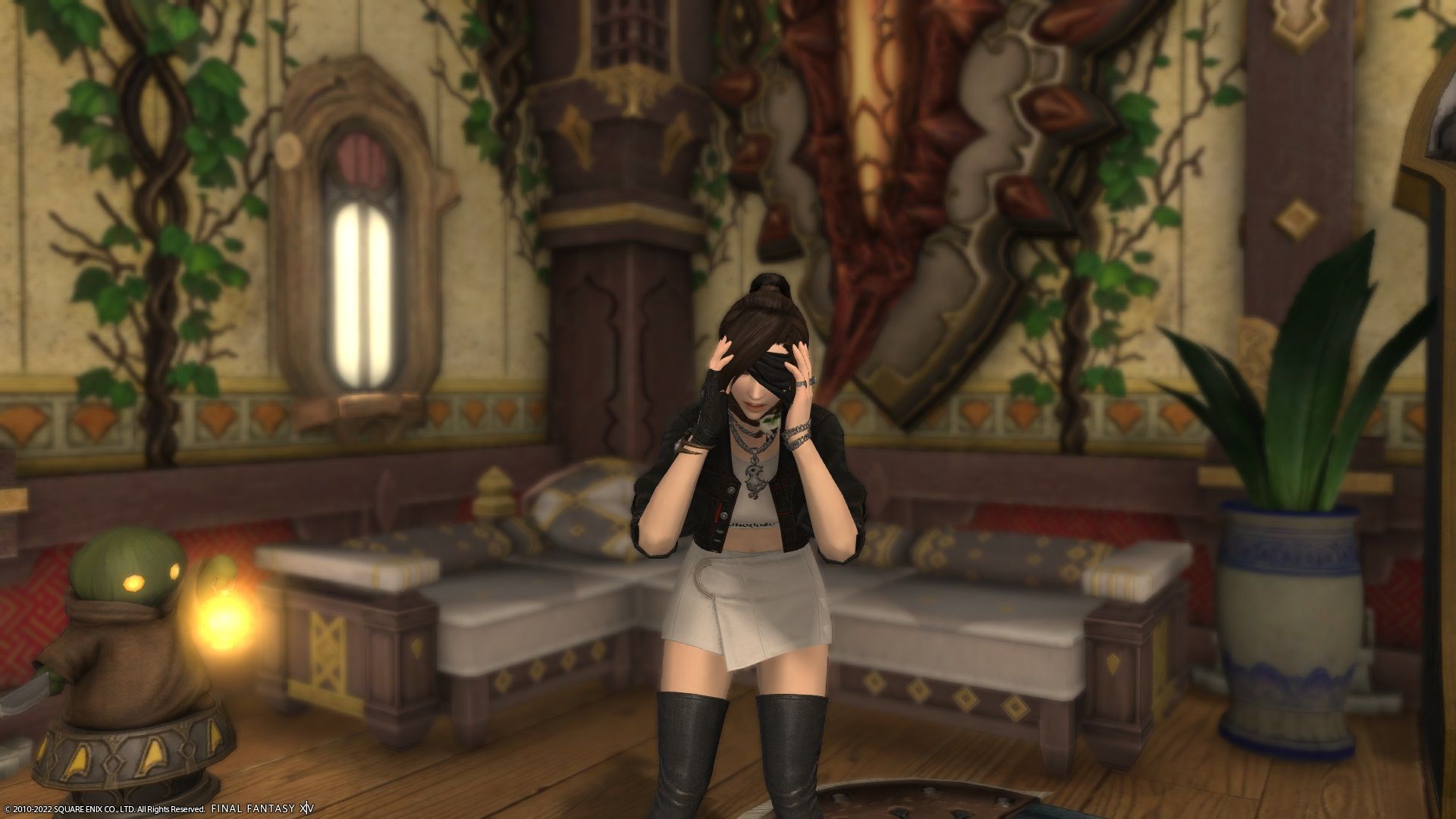 Now the obvious choice might seem like joining another FC, but I just can’t give up on my current one, and I don’t just mean because it would mean losing the house. A small group from Final Fantasy 11 built this FC together, and we worked hard to buy the land and build the house. It holds so many memories that I can’t face letting it go. I also have the daft hope that one day my friends might return, so I feel like some dusty keeper at the gate, waiting for them to appear.

For the same reason, I ruled out a character transfer to another world. In doing so, I’d still lose the house, not to mention I’d feel as though I was leaving my post. I could make an alt character and assign an FC leader to them in my stead, but my memory is terrible, and I’d forget to log in. Then the house would fall victim to auto-demolition eventually.

I have an abundance of alt characters on all the Data Centers as I travel around for community events. It always frustrates me that my low-level alts can rarely dress the part or get involved with decent emotes at parties and shows, as they’re still a fresh little sprout with barely 100 gil to their name. Most events I attend are on the North American servers, so I thought I could solve two problems with one solution — I decided it was about time to invest in an alt that I would level properly. 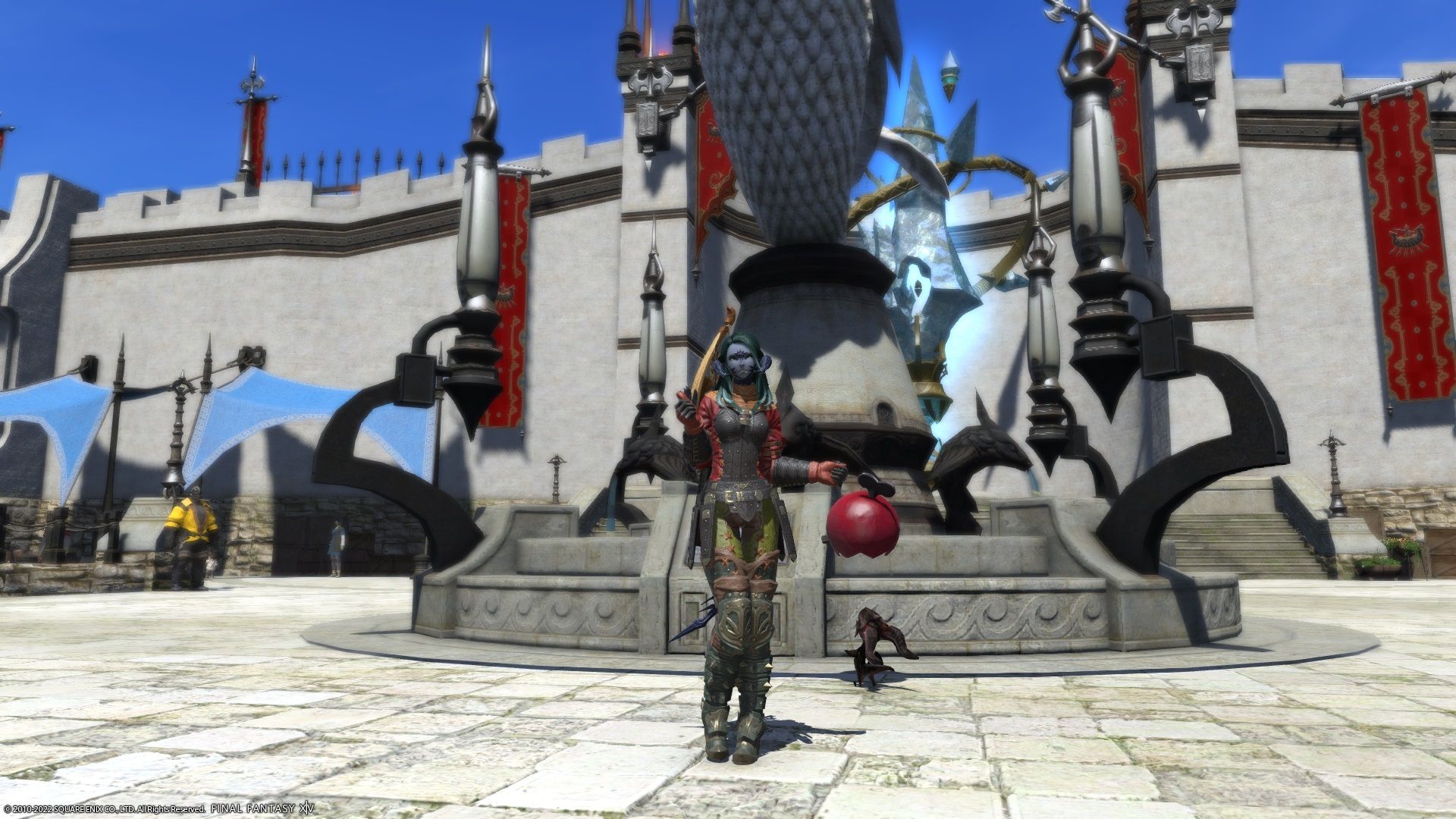 With Data Center travel, once I have a fully-fledged Warrior of Light on one of the NA servers, I can visit as many events as I want across any NA world without restrictions on area or level. Of course, the other incentive is to join a new FC and have that daily social interaction I’ve desperately been craving.

I went a little wild with my character creation and chose a different race and name from my other character. It’s actually not that wild, but my main character is a basic bitch, really. I chose her because she resembled my FF11 Hume, and so I’ve been a boring Hyur with the same mundane hairstyle and hair colour all this time because, if you haven’t noticed by now, I cling to the past.

I poked around to see if anyone was looking for a player prone to accidentally killing themselves in boss battles, and as luck would have it, our deputy guides editor had the perfect place for me in his FC, which is run by a TheGamer alumni. I was welcomed into the FC with open arms and a lively Discord server to match, and I finally felt like part of a team again.

The FC does regular content runs to help players with clearing content and farming, so maybe I’ll ditch my casual player card and get back into the swing of things once more. I am pretty rusty when doing anything that requires skill in the game, so it’s time to brush off those cobwebs. Despite braving it in the character creation menu, I went for my old reliable when it came to roles and chose Archer. Maybe I’ll step outside of my comfort zone later down the line, but for now, familiarity feels good. 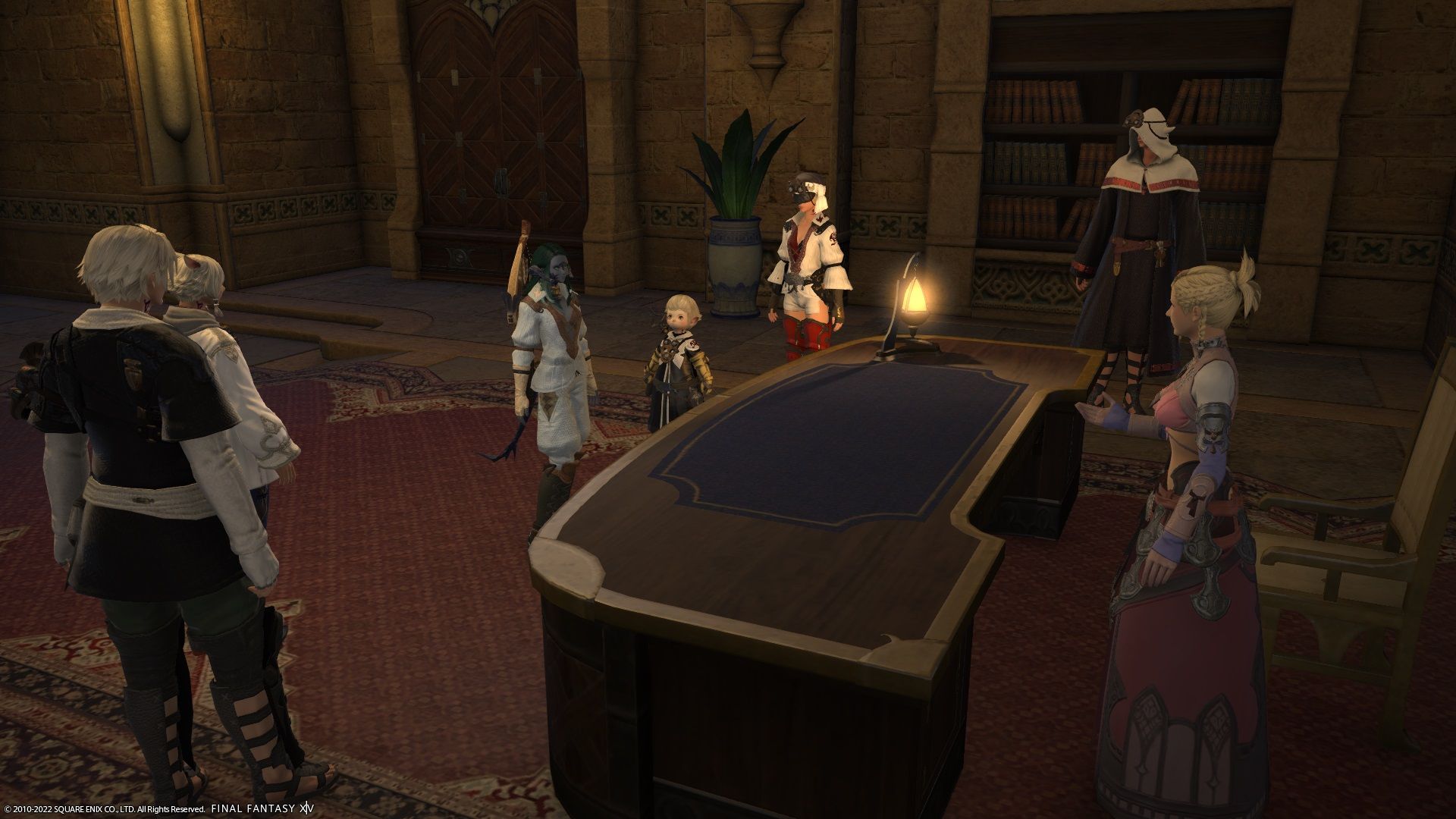 My first port of call was to wrangle with the Delivery Moogle to get all my letters and items. I say “all”, but the sad fact is not everything is account bound. Considering the number of products I’ve purchased for the digital code it came with, I wish they were all account-wide rather than character specific, but hey, ho. We all know what I really wanted was the EXP boost items and my beloved minions anyway, so with those equipped, I set off into Eorzea again.

It’s been years since I did the A Realm Reborn content, and I don’t remember it all as I have a truly terrible memory. Did I mention that already? I’d half considered buying a story skip for my character, yet I’m finding that retreading these old story paths is surprisingly refreshing. I thought it would be a slog going through all that content, but catching up with old characters that have long since been and gone, reliving the early adventures of my WoL, and rediscovering little side quests I had forgotten entirely has actually been pretty fun. It’s also interesting to spot little details and foreshadowing of events to come knowing the result of the Ascian and Zodiark/Hydaelyn arc.

I know I could simply use New Game+ on my main character to revisit old content, but part of what makes this trip down memory lane so enjoyable is I’m doing it all under the guise of a newbie sprout. There’s no pressure to remember everything I should know about my job role or every duty I enter as there are no expectations of me as a seemingly new player. Everything is a clean slate, and I can refresh my memory without feeling bad about doing so. 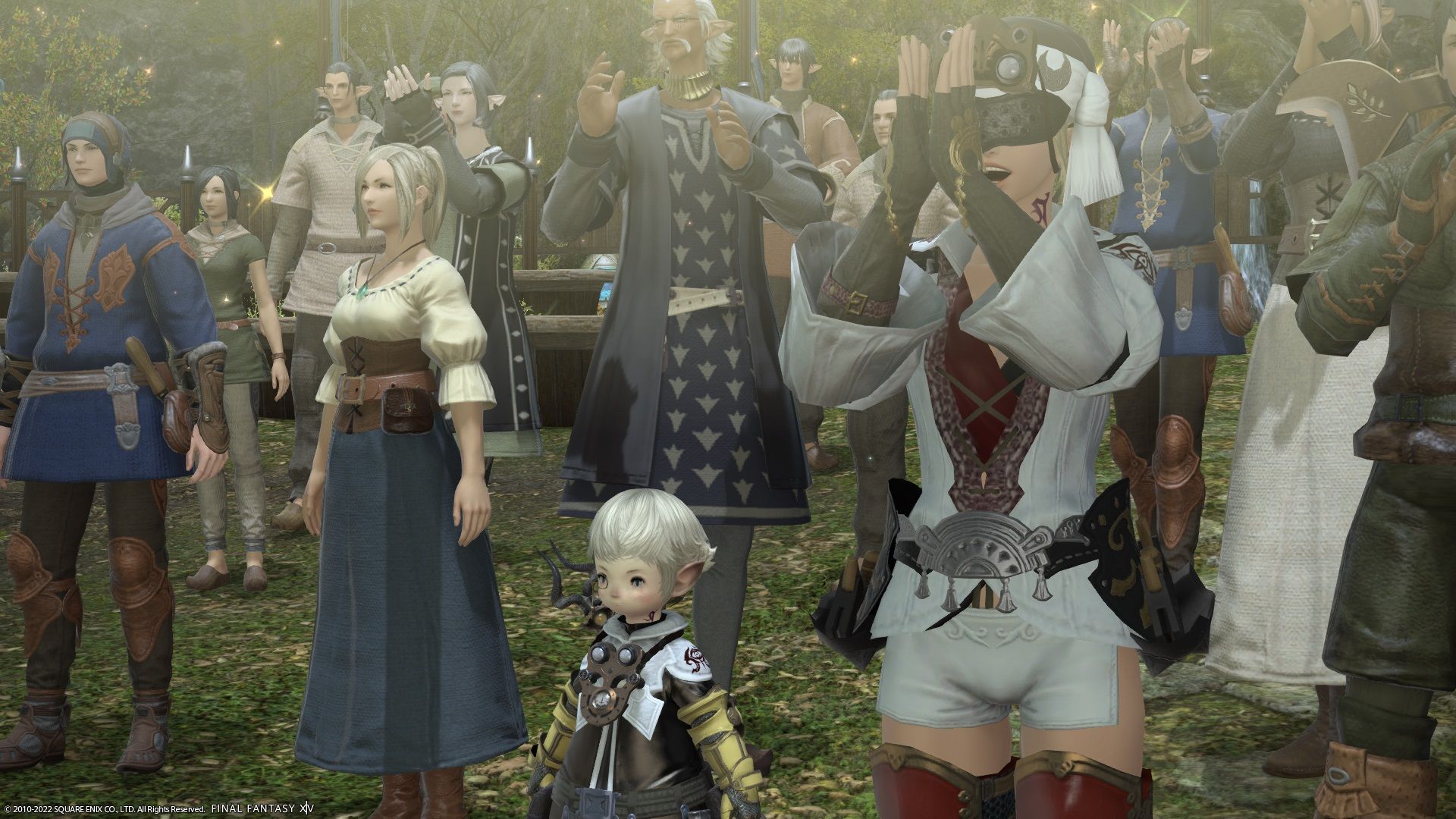 I log into FF14 multiple times a week, but usually, it’s for community events or to complete new content, or seasonal events. Since making this new character, I’ve been more excited about getting back to the grind of leveling and progressing once more, and I’m thrilled to be able to do it all while having people to chat with. I just wanted some friends to talk to and a better body to attend NA events with, yet rolling out a new character has given me so much more enjoyment than I thought it would.

I’m not going to give up on my other character. I’ve put too much blood, sweat, and tears into it, not to mention my hefty minion collection, so the plan is to dual-wield characters. Can I do it? Time will tell, I guess. Maybe one day I will let go of our FC house and just up sticks and move my main character, but for the time being, I’m enjoying rediscovering my sprout roots in the company of new friends.