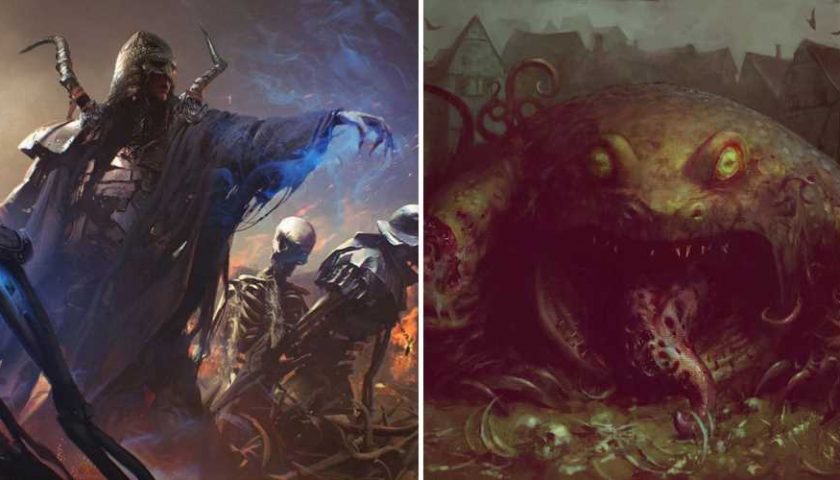 Whether you've played Magic: The Gathering or not, anyone who is familiar with at least one card game will be able to tell you about the graveyard. This is a ubiquitous term that's used across many card games to denote the area that cards go once they have been played, destroyed, or otherwise discarded. However, the graveyard is not always the end when it comes to Magic.

Despite the existence of graveyard hate cards like Rest In Peace, reanimate decks, better encapsulated as "graveyard matters" decks in the modern age, continue to appear in the meta across every format. That being said, let's take a look at some of the cards that make this powerful and entertaining strategy viable. 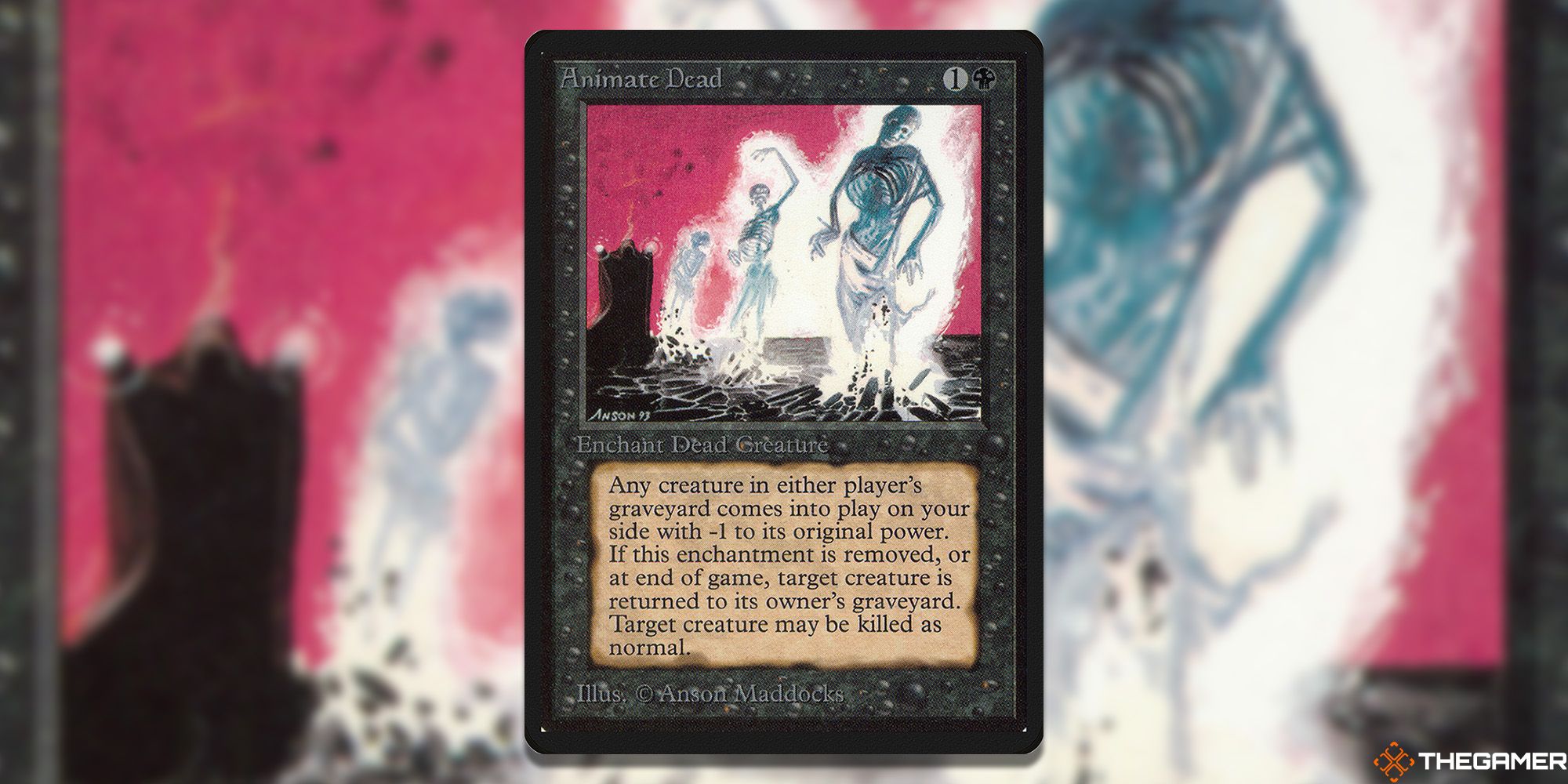 While it doesn't see as much Constructed play as it used to, Animate Dead remains to be the most powerful version of what is the most straightforward reanimation effect in the game. Nowadays, Standard legal cards printed with the same effect come in at a cost of five CMC (converted mana cost). For this reason, alongside the card's roots as a part of Magic's first graveyard strategies, Animate Dead deserves to be on this list. 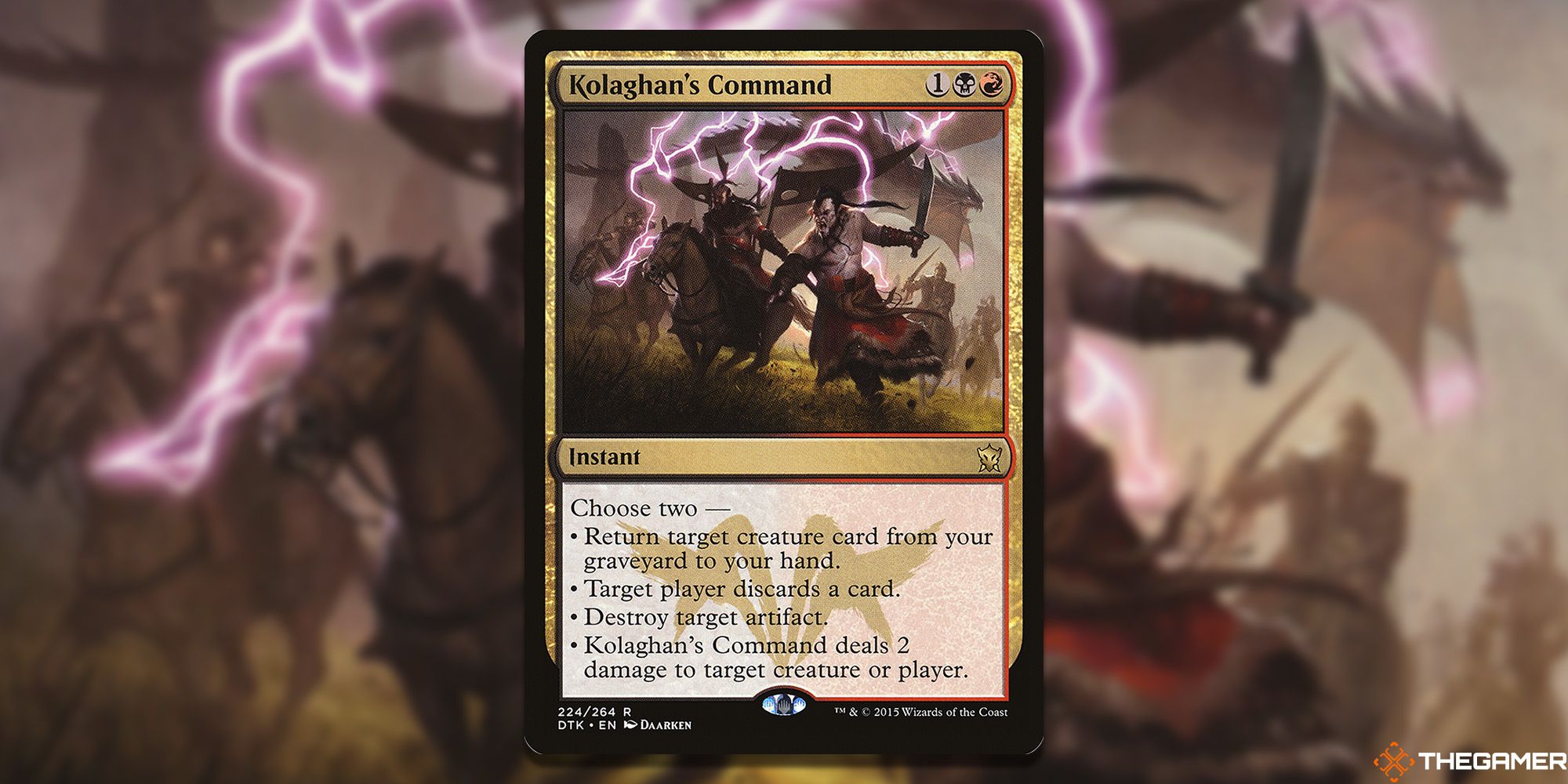 Kolaghan's Command may not be a reanimation spell in the most traditional sense, but its use alongside Death's Shadow has pretty much turned it into one. Kolaghan's Command doesn't return a creature directly to the battlefield, but when the creature coming back to your hand is a 10/10 that costs one black mana, it might as well be doing exactly that. Granted, this isn't the most common use for Kolaghan's Command by a longshot, but it does come up.

Going from the cheapest of ancient Magic cards to one of the most expensive, Bazaar Of Baghdad is a card anyone wouldn't mind owning. It comes in at a ballpark cost of just over $4,000 for a single copy. Aside from the far less potent Modern dredge deck, owning four copies of this ridiculously expensive card is just about the only way to play a competitive Dredge deck and in the Vintage format of all places.

By combining this card's effect with Dredge cards as well as other cards like Narcomoeba, Creeping Chill, and Prized Amalgam, the beloved Dredge mechanic has found a home in Magic's oldest format for the time being. 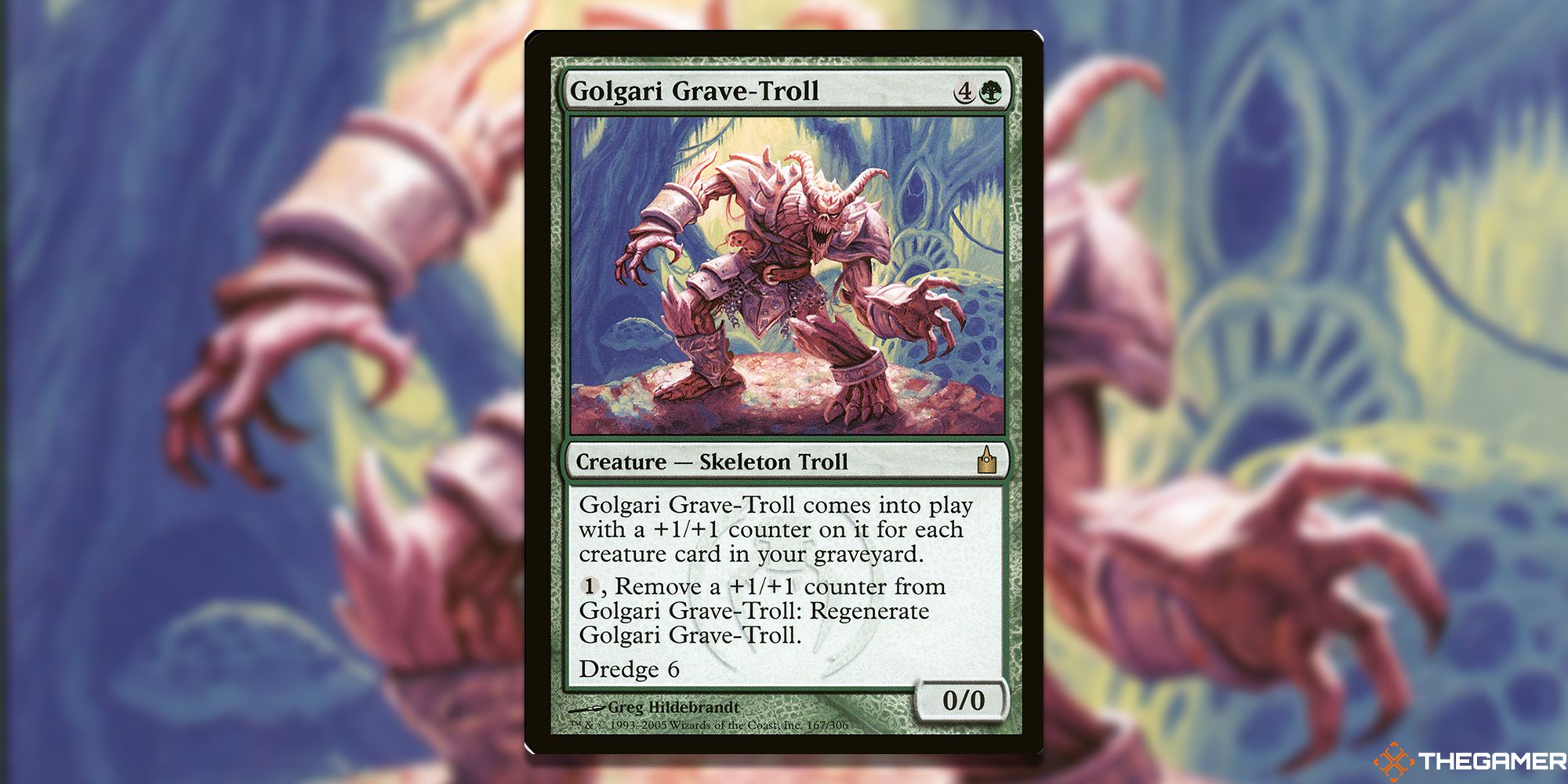 Speaking of Dredge, we've got to include the best Dredge card ever printed: Golgari Grave-Troll. This card is so powerful it has been banned in Modern and even made the Restricted list in Vintage.

While its ability to endlessly regenerate itself is one thing, being able to mill six cards from the top of your library instead of drawing every turn is just too powerful of an effect for players to be able to access for free. As this list will display, there are just too many cards in MTG at this point that benefit from having a high number of cards in the graveyard. 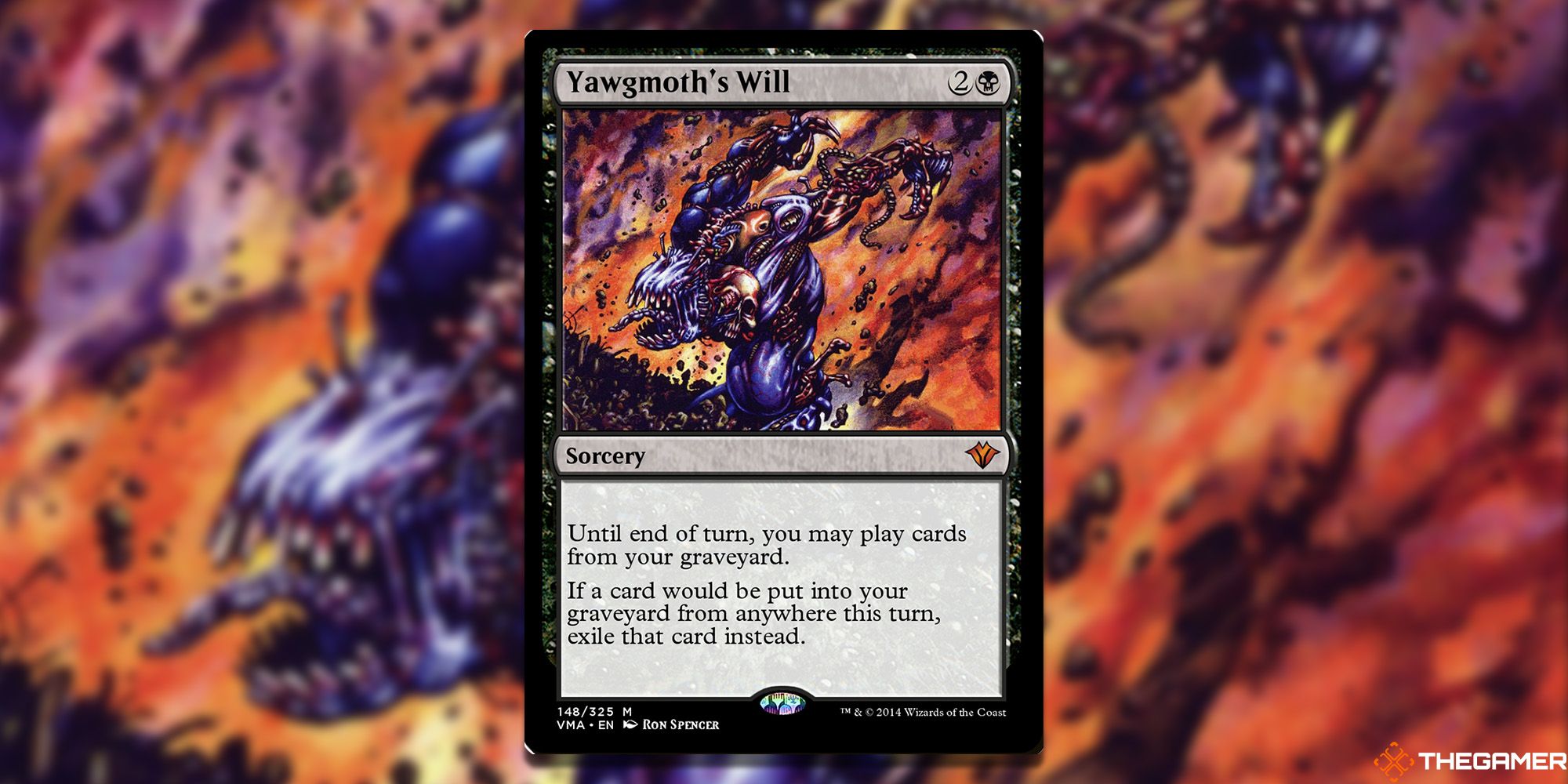 If you thought being banned in Modern and restricted in Vintage was bad, how about being banned in Legacy and restricted in Vintage? While it may appear relatively harmless at first glance, Yawgmoth's will is completely busted due to the existence of the storm mechanic as well as the card Tendrils of Agony. By using cantrip and draw effects as well as mana generation cards like Dark Ritual, Black Lotus, and others, it's easy to instantly kill a player without them ever having had a turn. Doesn't sound very fun, huh? 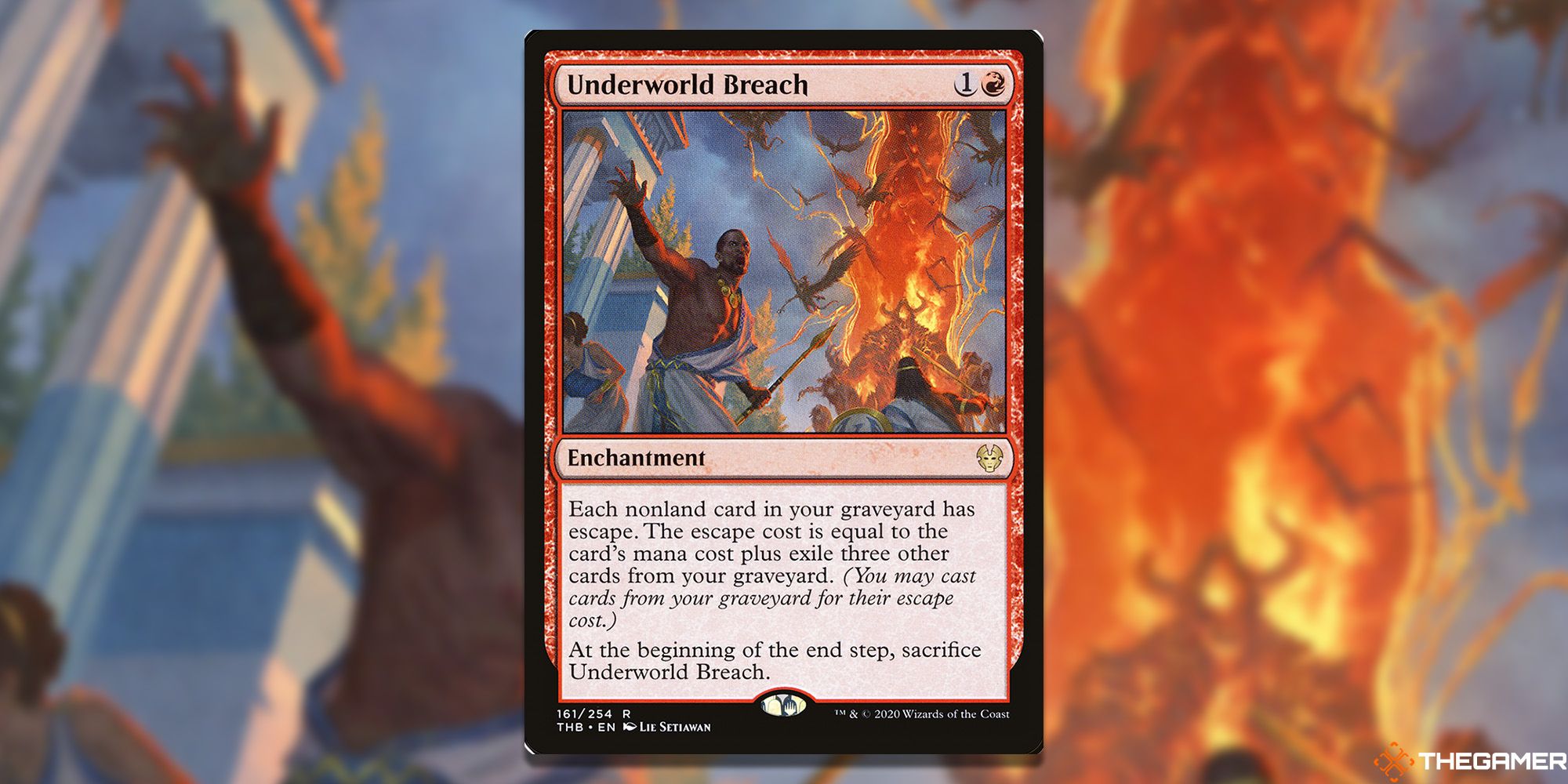 This relatively recently released card led to the creation of an entirely new combo deck in Vintage that goes by the same name. While relative to the field Underworld Breach is one of the slower combo decks in Vintage, it makes up for this in resilence. For this reason, Underworld Breach is one of the most difficult decks to properly pilot across any format as it requires its player to understand what their opponents are trying to do and how to stop them.

Nonetheless, sometimes none of that matters at all, as with the right draw Underworld Breach can win the game on turn one when used properly alongside Black Lotus and Brain Freeze. Welcome to Vintage, folks. 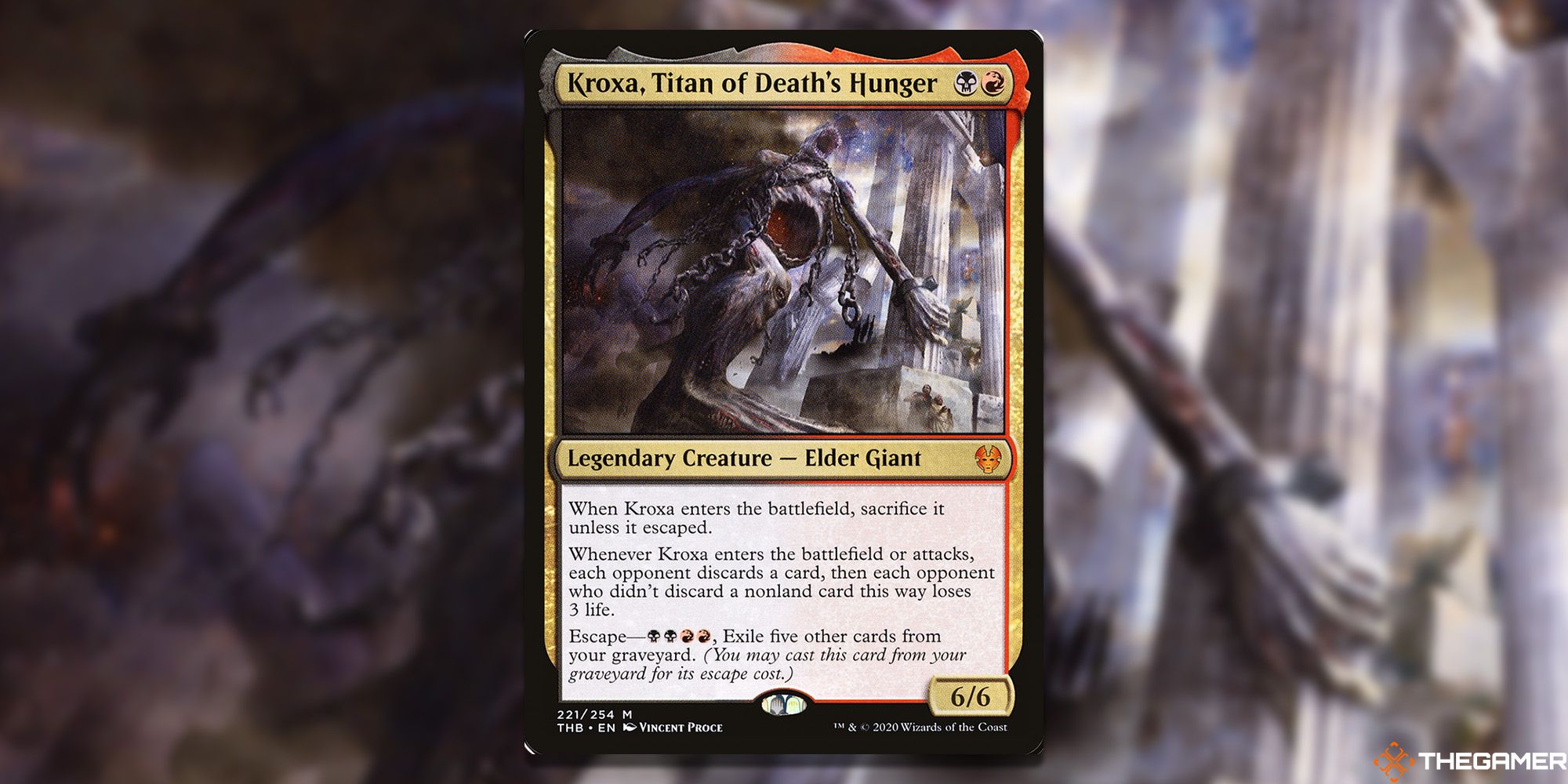 Enough about crazy cards that are banned in some of the game's older formats though, let's get back to interactions in formats that most players are already familiar with. Kroxa is a value engine that slowly grinds your opponent out of cards and life while also representing a sizable threat on the battlefield.

Not to mention, the card's own recursion is practically built in thanks to its use of the escape mechanic also seen on Underworld Breach. The only thing Kroxa needs is a deck full of other cards that can reliably keep the graveyard full. Well, that and the time to be played more than once as far as the speed of older formats is concerned. 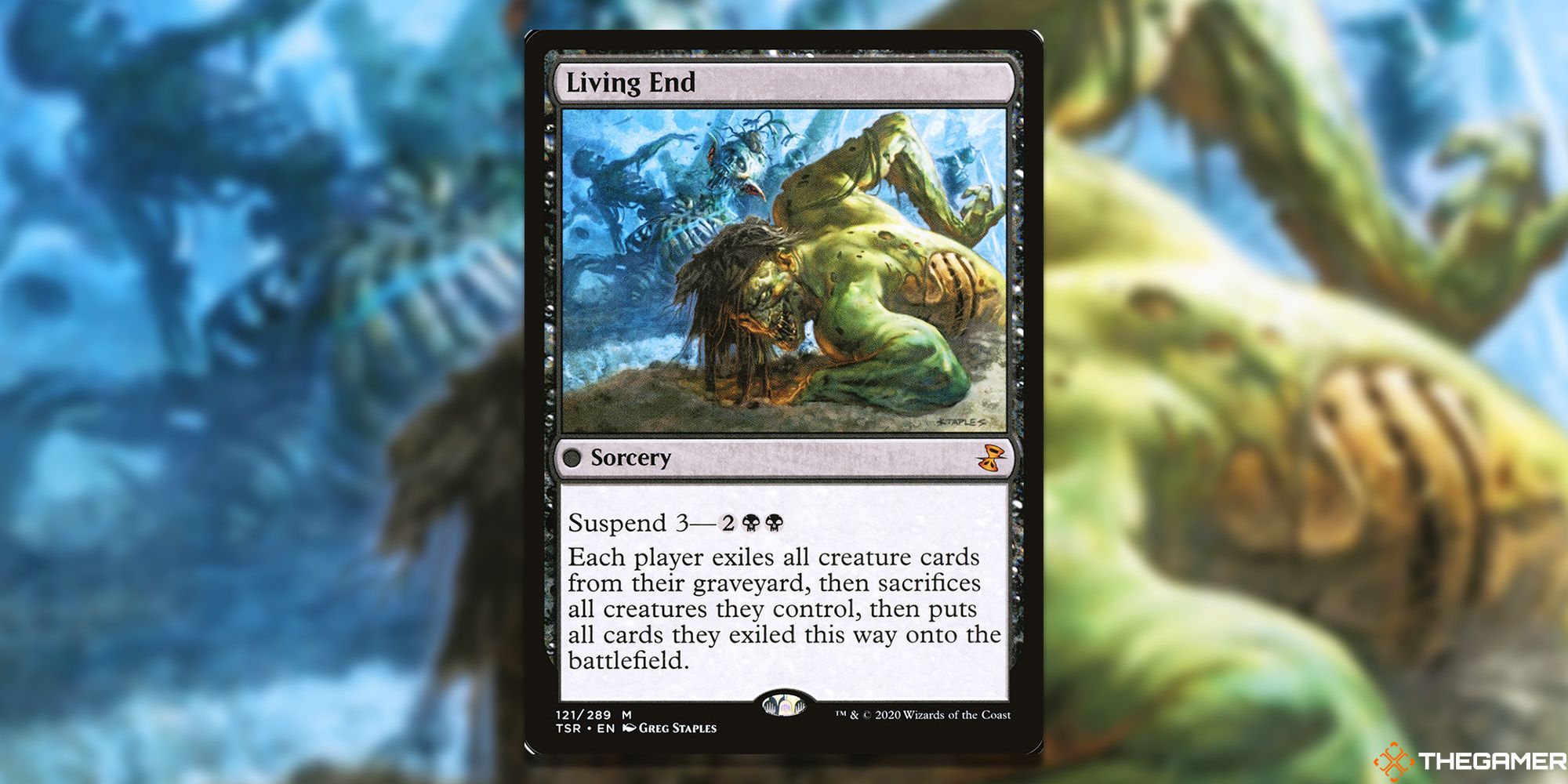 Back in February of 2021 when Simian Spirit Guide was banned in Modern, many players figured it was the end of Living End. However, it will take much more than a simple ban on mana ramping to put the nails in this card's proverbial coffin.

While Living End would take way too long to come into play by its normal circumstances, by using the cascade mechanic players are capable of casting it as early as turn three. This usually ends the game as it can be done during your opponent's turn thanks to the instant speed of Violent Outburst and while holding up a counterspell thanks to Pact of Negation. Ironically enough, the banning of Simian Spirit Guide may have indirectly resulted in Living End becoming more powerful than it ever was before. 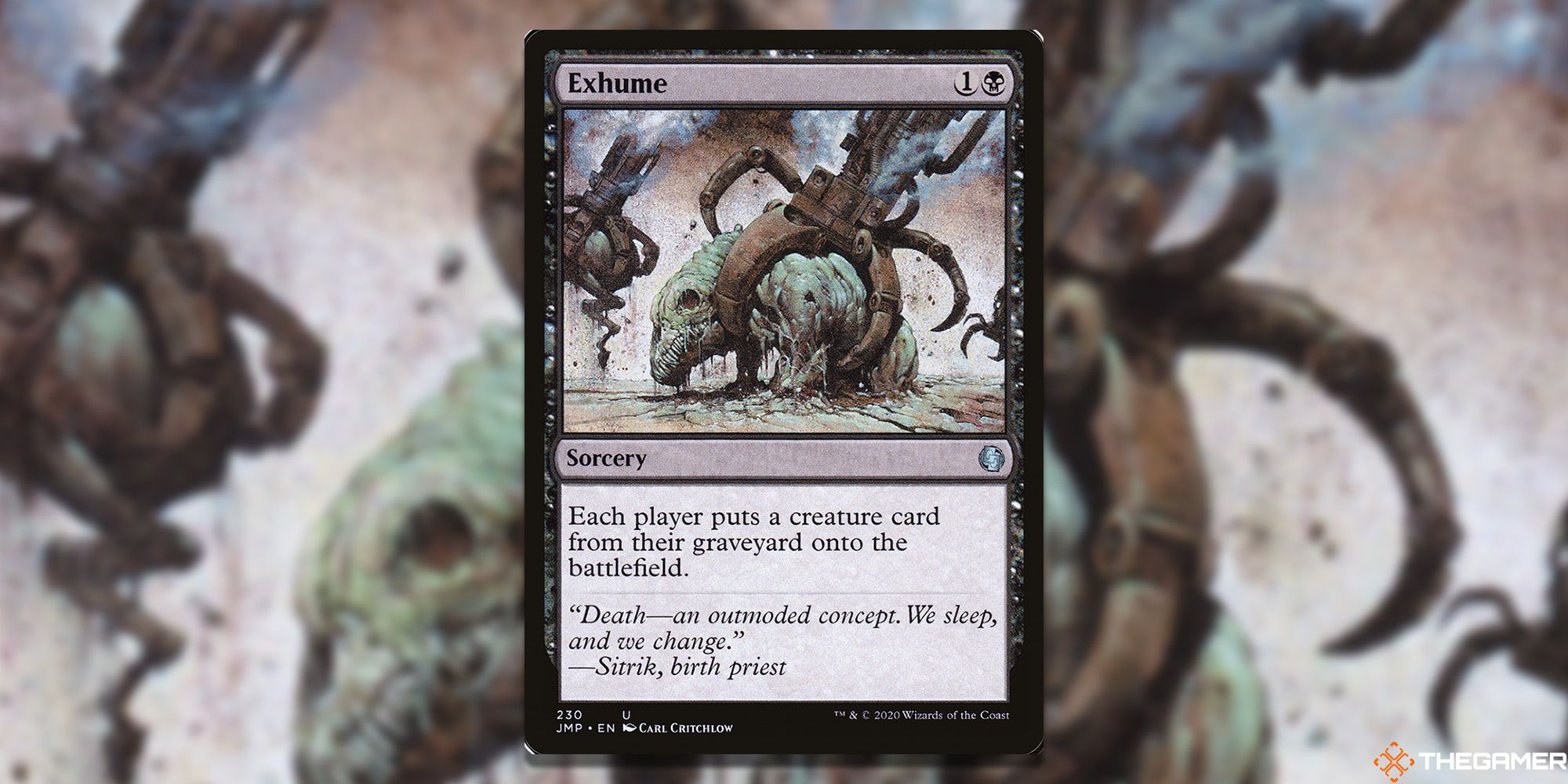 Returning to cards legal in Legacy and Vintage only, Exhume is one half of the most faithful reanimation deck in existence, which is aptly named "Reanimator". This Legacy meta deck uses cards like Faithless Looting and Entomb to place absurdly powerful creature cards in the graveyard, then bring them back with Exhume and one other sorcery. 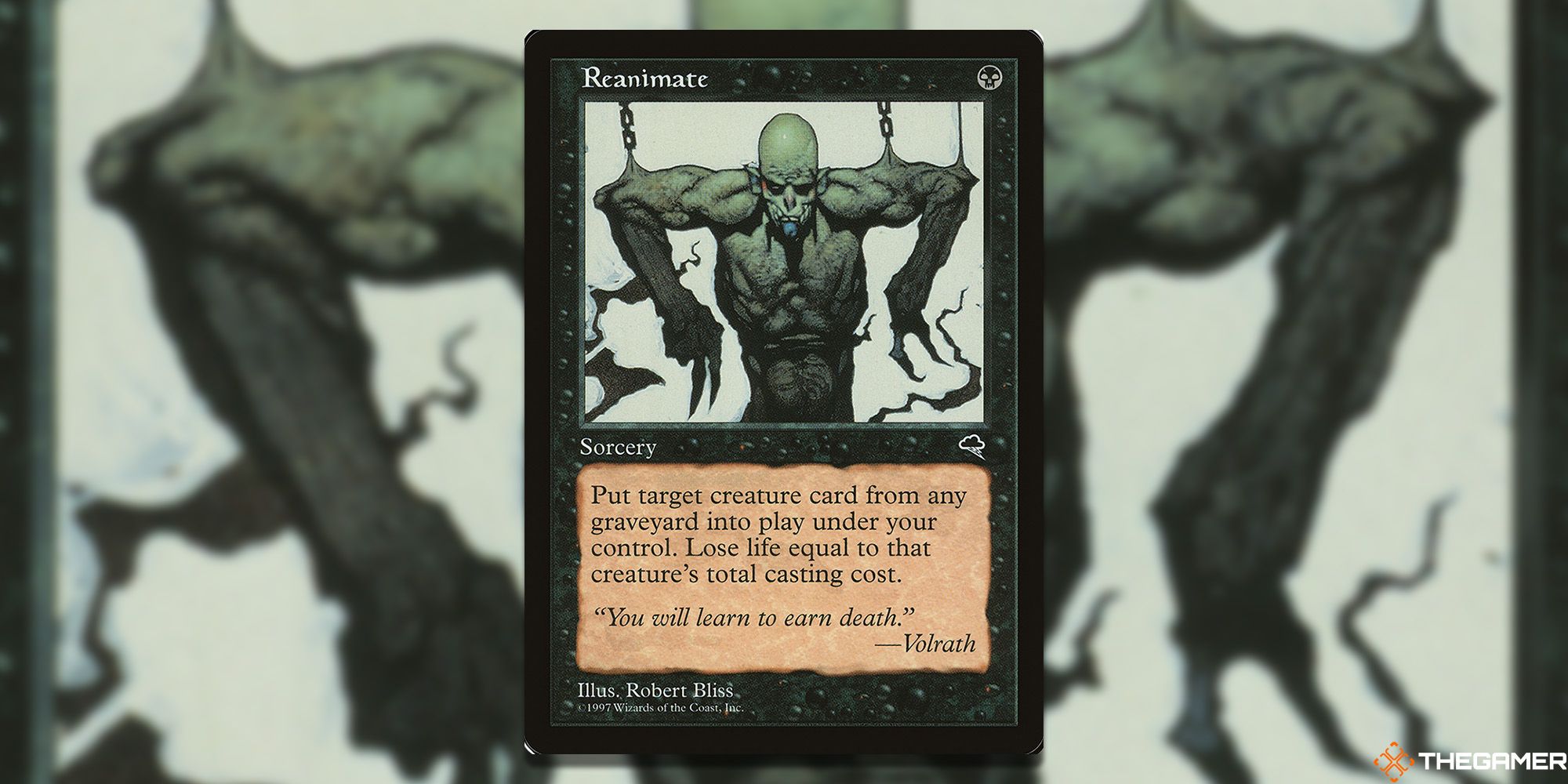 At half the cost and some life for all of the reward, Reanimate is the best reanimation card in all of Magic's history — and properly so. Alongside Exhume in the Legacy reanimation deck, this card is used to put creature cards like Griselbrand, Archon of Cruelty, and Serra's Emissary into play as early as turn one.

While it's clear to see that reanimation has taken many forms over the course of Magic's history, it's good to know that the old ways are still around even if only in one of the game's oldest formats. By the way, you wouldn't happen to have $3,000 we can borrow to play Reanimator in Legacy, would you?