We’ve got a new preview to share for Magic: The Gathering’s upcoming set, Phyrexia: All Will Be One. Atraxa has not only gotten a bit of an upgrade, but she’s also mentioning a never-before-seen card type.

Atraxa, Grand Unifier is still the same colors, still an angel, and still has flying, vigilance, deathtouch, and lifelink. She's now a 7/7 for three more mana, features the "Phyrexian" creature type instead of "horror," and instead of proliferating, Atraxa, Grand Unifier reveals the top 10 cards of your library and lets you take one card of each type and place it in your hand. Then it lists the card types: "Artifact, battle, creature, enchantment, instant, land, planeswalker, and sorcery."

The card type "battle" is totally new to Magic, and Wizards of the Coast has yet to mention anything about this new card type. However, fans are speculating that this could be a reworked version of the "skirmish" keyword that was scrapped from 2019's War of the Spark. 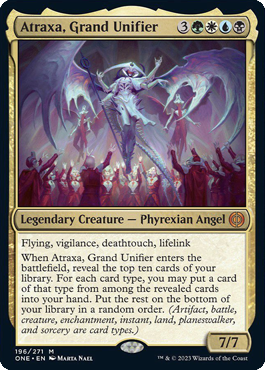 Back before War of the Spark was released, head Magic designer Mark Rosewater described Skirmish as "a battle between you and your opponent" that "would be overlaid onto the game and would generate effects that affected the game." It would use an external card that would have its own rules that would generate a skirmish token similar to the monarch rule. The card would be a "tiny game board" showing the field of combat, and to advance, the player would have to meet certain conditions (often dealing combat damage, casting another skirmish card, or killing an opponent's creatures). Advancing far enough to win the skirmish would generate an in-game effect.

"In the end, what killed skirmish wasn't that we didn't like it or that it wasn't fun," wrote Rosewater, "but it didn't capture the essence of what we were trying to do with the set. (Also, there were a host of play design issues that needed to get solved.)"

It’s possible those play design issues have been solved, with Atraxa heralding the arrival of a brand-new card type in Magic. While we won't see any more battle in Phyrexia: All Will Be One, there is a chance we could see it pop up in March of the Machine, or even later this year's Lord of the Rings: Tales of Middle-earth.