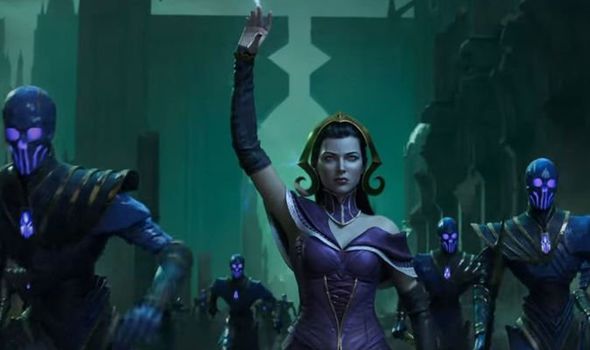 MTG Arena: War of the Spark adds a lot of new cards to Magic: The Gathering Arena today and is a big story event for the game.

This latest card set brings the conflict between Nicol Bolas and the Gatewatch to its head in the sprawling city-world of Ravnica.

And the good news is that each booster pack of War of the Spark will be guaranteed to include a Planeswalker card.

The new MTG update went live a few hours ago and includes 264 cards, as well as the chance to pick up free booster packs.

Players can enter the Code “PlayWarSpark” to claim three War of the Spark booster packs, a nice little boost for everyone hyped for the next expansion.

And there’s even better news for fans with an active Twitch Prime account, with another redeemable code available to add one 60-card Boros Legion deck.

The new War of Spark expansion includes 36 planeswalkers, the brand new Teyo Verada, and is going live first on Arena before a physical release later this week.

But while the new MTG Arena update includes a lot of new content, it has also arrived with bug issues.

Players are reporting error messages stating that they are unable to update the game data.

There are also issues being flagged with connections not appearing and other issues that usually happen when a lot of people trying to access a service at the same time.

The good news is that the MTG support team are aware of the problem and are looking to fix it.

The latest report on the updating data issue reads: “We are investigating reports of an “Error Updating Data” error message. If you are receiving this message, please wait a few moments before trying again.

“We will update you with more information once it becomes available.”

Patch notes for MTG Arena can be found below:

The stakes have never been higher as you battle your opponents on top of Bolas’s Citadel during the epic finale of the War of the Spark.

Cards with amass assemble the Dreadhorde, Nicol Bolas’s undead army, commanded by a master of necromancy, the planeswalker Liliana. When you amass you will create a Zombie Army token creature or put additional +1/+1 counters on your existing Army if you already have one.

To quickly build Ravnica’s and planeswalker’s defenses, or grow the invading undead army, proliferate increases the counters on your forces. When you proliferate you choose any number of players and permanents that already have counters on them and add an additional counter of each type already on that player or permanent.

How much damage will be done by the triggered ability of Dreadhorde Butcher, or the triggered ability on Chandra, Fire Artisan? How many instant and sorcery cards are in your graveyard for Invade the City? We’ve added a badge with quick reference for these hard to track values. This badge has also been added to some cards and abilities not in War of the Spark, for example Truefire Captain’s triggered ability and Pteramander.

Here are some of the more relevant updates for triggered abilities in War of the Spark:

The number of counters on Blast Zone as it was sacrificed for its last ability will be displayed on the ability on the stack so both players can see what is about to be destroyed.

As mentioned in the prompt, the cards you select are the ones that will remain in your opponent’s graveyard, so select the cards you don’t want your opponent to have. Of course, if Nicol Bolas is around you won’t be prompted, the Dragon-God gets all the cards.

We’ll grey out the reveal button when you draw a card that isn’t an instant or sorcery. You can still click on that button to reveal it, maybe you had just drawn a cool planeswalker and you want to show it off to your opponent, but Kefnet is not going to make a copy of it.

When you do reveal an instant or sorcery card, the copy will be shown with the cost reduction applied. Select the copy from the resulting browser to cast it.

As with previous spell copy effects, we’ll automatically hold priority for you after casting an instant or sorcery spell when you have Narset’s Reversal.

Our featured antagonist in War of the Spark may end up with quite a few loyalty abilities. When selecting one to activate they will be sorted by source planeswalker, starting with Nicol Bolas’s default loyalty abilities.

The gained loyalty abilities are displayed as printed on the original card for easy reference, however any of those abilities that reference the card they are printed on by name are treated as if they reference Nicol Bolas, Dragon-God. For example, if Jaya, Venerated Firemage is on the battlefield, Nicol Bolas deals the damage if you activate the ability he “borrowed” from Jaya.

For Niv-Mizzet’s enters the battlefield triggered ability, if there is a single card for a color pair it will be selected automatically, you are only required to make selections for color pairs with multiple options.

When casting this card use the standard modal selections to select a mode more than once. The previously selected modes are displayed in the bottom left corner of the browser and can be clicked to unselect them.

When resolving Tamiyo’s first loyalty ability, the name a card browser will be prepopulated with the name of nonland cards in your initial deck list. You can still type in any card name if you want to be tricky and name a card that is not in your deck.

TEZZERET, MASTER OF THE BRIDGE

The affinity for artifacts hanger on Tezzeret always lists the current number of artifacts controlled by Tezzeret’s controller, which applies both to the cost reduction granted to that player’s other creature and planeswalker spells, as well as the amount of damage that is dealt by Tezzeret’s first loyalty ability.

The card you exiled with Ugin will be tucked under the associated Spirit token and visible to you. Don’t worry, your opponent can’t see it.

If there are any other damage prevention or redirection effects that could apply to damage dealt to Ugin’s Conjurant, they will be selected automatically prior to the Conjurant’s own damage prevention effect, to minimize the number of +1/+1 counters removed. Disabling “Auto Choose Replacement Effects” in the options menu will allow you to manually choose which replacement effect to apply.

VIVIEN, CHAMPION OF THE WILDS

If you exile a non-creature card with Vivien’s second loyalty ability your opponent will still see it as a face down “near hand castable”, just as if you had exiled a creature card. Only you will know that the exiled card was not a creature. This also applies to land cards exiled by Thief of Sanity.