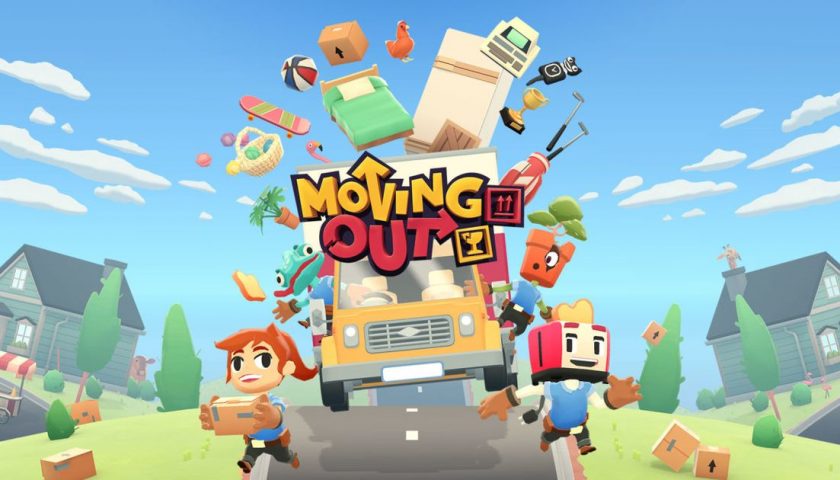 They say that moving house is one of the most stressful events you can experience in your life, along with bereavement and divorce.

So, I'll admit that the idea of a couch co-op game where you can work with up to three other players to move objects from a house into a removal van filled me with a little bit of dread.

Moving Out from Australian developer SMG studio is very much like another Team 17 published game – Overcooked.

Except rather than trying not to set fire to your kitchen whilst putting together increasingly complex items of food, you are tasked with trying to get various pieces of furniture into a van as quickly as you can.

Whether those items are in pieces or not seems irrelevant in this amusingly irreverent physics based sim.

You work for a company called Smooth Moves, an up and coming removal business in the town of Packmore.

After a modest tutorial, which takes you through the basics of the removal business: bending from the knees, not your back; the art of the pivot; how to throw items onto a truck and the best ways to slap your co-workers, you are awarded your certificate in Furniture Arrangement and Relocation Techniques or F.A.R.T.S for simplicity, and sent on your way.

There are a tonne of story levels to work your way through, each with a timer to beat awarding either a Gold, Silver or Bronze medal based on your speed.

Additionally, each level also has a number of hidden objectives that will award you stars upon completion to be spent on Arcade Levels.

These objectives invariably ask you do something outside of delivering the items the client wants; things like delivering items not on your list, scoring a goal or even not slapping a ghost!

The Arcade levels that your stars unlock aren't quite as much fun as the story levels, focusing more on completing an obstacle course within a set period of time, rather than more the more curated levels of chaos that the story brings.

You view everything from a top-down perspective. The simple, chunky visuals are strongly reminiscent of Overcooked, and do a lot of work in terms of conveying some of the innate humour in the game play.

It isn't as frenetic as Overcooked though. It seems that moving furniture is slightly less reliant on team work than making a burger, with all its constituent parts, is.

Certainly in the early levels, most furniture can be moved singularly with only a few items that require team work. Later levels do provide more scope for working together to try to improve your speed with one person throwing items down to the other from a higher floor, as well as more items requiring more than one person to move it.

It's a shame though that main causes of chaos in Moving Out come more from the environmental design than poor communication between you and your co-workers.

Much of the hilarity (and arguments) should come from trying to co-ordinate your team of hapless removal guys, instead you are reliant on tricky pieces of furniture and obstacles to add some mayhem.

To its credit, I think much of the seemingly easier time to be had with Moving Out is down to some thoughtful accessibility options.

Scanning through them, it is clear that the development team was keen to include as many people as possible in this fun little party-game with options to scale down the difficulty when two players are carrying an object, to increasing the overall time it takes to complete a level.

There is very much a feel that this has been designed with a slightly younger audience in mind as well as those whose motor skills may not be quite so refined.

Aimed at younger audiences it may well be, however there are a few nods to those of us who may be playing it with children with a level inspired by the 80's arcade game Frogger, as well as other pop culture references littered throughout the levels.

There's also lots of visual jokes and quirks going on in each level, which make each one fun to play, and crucially revisit.

Moving Out is a lovely little party game. It is gently humorous, and due to the slightly less frantic nature of moving furniture, it is less inclined to generate huge family arguments when communication inevitably fails.

Interestingly, it is also entirely possible to play on your own with the larger pieces of furniture taking you longer to move than if you had a partner or three. Ultimately though, this is a party game, designed for playing with others, and as one of many focused around chaotic team-play it is one of the stronger ones on the market.

It effectively manages to balance the levels of potential mayhem through some clever level design with some good accessibility options to make playing with younger players a simple and relatively painless process.

– Reviewed on Xbox One

Moving out is a lovely little party game. Lots of fun, and gently humorous with some good accessibility options making it easy to play with younger or less skilled players for everyone's enjoyment.