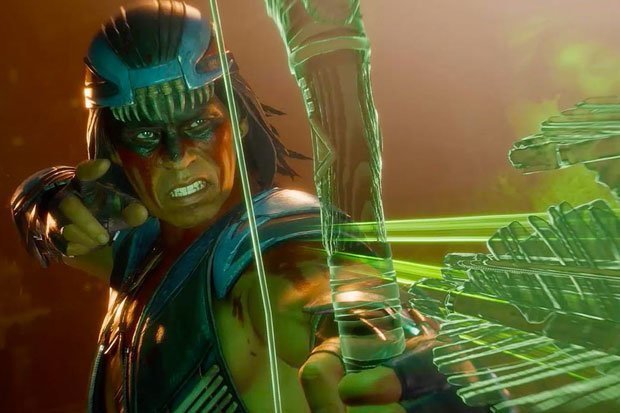 Nightwolf is back – climbing out of the pits of obscurity to take his place at the top of the ladder of Mortal Kombat characters.

The Native American fighter that once defended Earthrealm from Shao Khan’s Outworld invasion has returned (or at least, the Spirit that inhabits the vessels Nightwolf chooses has returned – as the characters in the game remark this Nightwolf ‘is not the same as the one before).

The first thing to note about Nightwolf is that he is going to impact the current state of Mortal Kombat 11 to quite an interesting degree thanks to his considerable utility and his occasionally dangerous distance-play capabilities.

Nightwolf has a massive toolkit that allows him to dominate the battlefield from a variety of ranges – making him a great zoner and a massive threat when you’re up close and personal with him.

His Variations support this: the two stock Variations Nightwolf comes equipped with guide him towards dominating the mid-range zone and getting in close enough to land his Crushing Blows, and giving him the tools to rapidly close distance and deal some serious damage with great combo extenders.

In a game where so many enemy fighters use projectiles to play keep away and take advantage of characters that end up far away from the other combatants, command rolls that close gaps and result in pretty quick attacks are always reliable moves.

Turns out Grey Cloud (that’s the new Nightwolf, for what it’s worth) can choose to equip a move that allows him to roll under mid/high projectiles and attack the enemy. During this roll, you can burn a bar of meter to turn into a pop-up – a good aggressive and defensive move, all in one!

When you pair that with a few of Nightwolf’s other utilities – the potential to repel projectiles, the ability to negate damage from projectiles if you burn meter on calling in his spirits, his delayable arrows, his quick screen-wide lighting call – you’ve got a fighter that can command more or less the whole arena with ease.

There’s also this really nice arcing tomahawk toss that can pop any opponents attempting to close space off their feet, giving you a great window to do one of your spirit animal summons and buff your (we think) attack or defense, depending on whether you call on the bird or the bear.

Mix in a couple of nice, mid-starting hit-confirm strings (yes, the timing is nasty), you get a versatile zoner that’s going to look really appealing in the MK 11 online scene.

That brings us to Nightwolf’s close game. Some of the most punishing combo strings are pretty high on start-up time, but if you’re using Grey Cloud to punish whiffed projectile attacks, you’ll be in the money.

Enhancing a reflect will allow you to teleport behind the enemy and start up some of the more sluggish (but deadlier) combos.

If you’re a good player, there are some lengthy hit-confirm combos that can burn two bars of meter that can rinse your opponent at close range. Pile the pressure on your enemy and get them to make messy mistakes and open up their defense and you can start to get those Crushing Blow opportunities, too.

One comes from a throw – and that’s always nice because unless you’ve got the reflexes of a pro, these are really hard to read and until you learn to fight against Nightwolf well, these might come up against you a lot. The other comes from his Enhanced Rhino Dash: catch the opponent dashing towards you, Enhance your [back, forward + 4] and you’ll so dome massive damage for a quick start-up move.

Nightwolf has always been one of this writer’s favourite Mortal Kombat characters, so seeing NetherRealm give him this much utility and space to come into his own in MK11 is reassuring. He’s migrating from the bottom of the tier-list to somewhere – maybe – near the top.

He’s not going to be a one-and-done addition: Nightwolf is back, and he’s deadlier than ever.