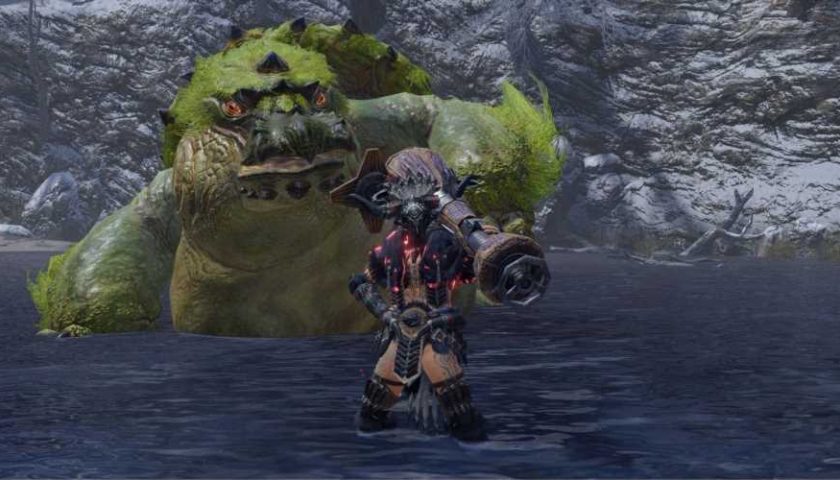 Take the humble Light Bowgun – it's a small ranged weapon with a lot going for it – mobility and speed being the key points. It's a perfectly viable weapon for Monster Hunter Rise.

But what if you want something with a bit more punch? Enter the Heavy Bowgun. What this weapon lacks in speed it more than makes up for in power. With a Heavy Bowgun by your side, monsters must beware your hunter, lest they get destroyed by its explosive powers. 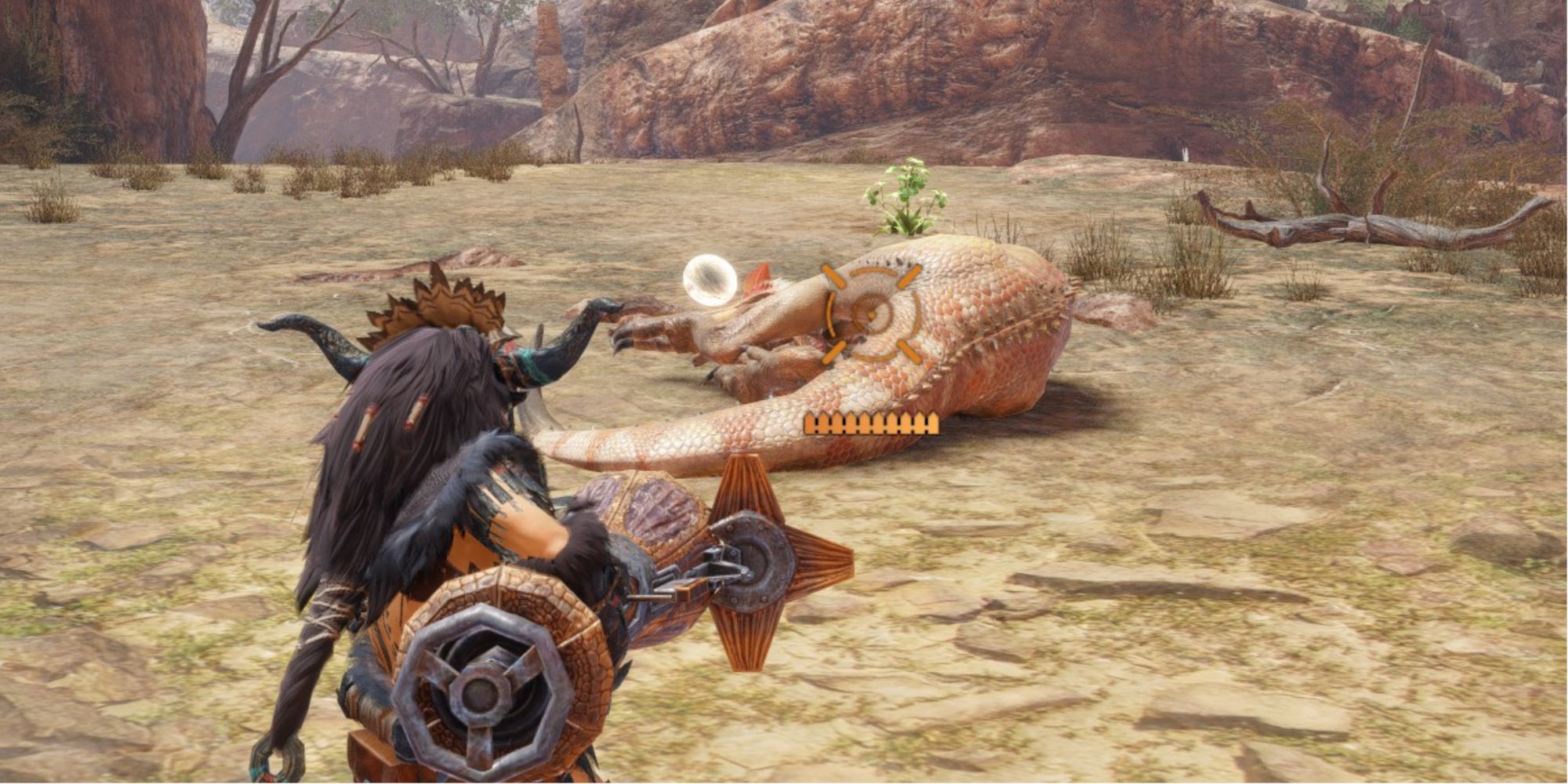 The Heavy Bowgun is one of those weapons that are easy to learn, but hard to master. When drawn, the weapon will weigh you down – your movement speed will drop and your dodge rolls will become sluggish. Thankfully, you have some Silkbind abilities to make up for this, and a whole lotta power to compensate.

Firing a Bowgun is a bit different to swinging a conventional weapon:

It's possible to perform a melee attack with X/Y + A/B, but this is a very situational move. You won't have many opportunities to use it as your perfect range is long.

When you have a Heavy Bowgun equipped, you can swap ammo types on the fly. This is an important part of your strategy – you'll want to adapt your ammo choices to the monsters you're hunting, and even the part of the fight you're on. For example, you have different ammos for slicing tails and stunning with headshots.

Every Heavy Bowgun uses a different set of ammo, so you'll have to be picky when selecting one for a hunt. It's good practice to forge multiple types of Heavy Bowgun, just to make sure you have the right tools for every job. Having full access to the elemental ammos and the status ailment ammos is a good start.

The table below details every ammo in the game that Heavy Bowgunners have access to.

Note that this collection of ammo is identical to that of Light Bowgun with one major exception – the addition of Wyvern Ammo.

Some Heavy Bowguns are better at using some ammo types than others – these are indicated with icons next to the ammo type on the Equipment Info menu and on the ammo selection section of the combat HUD.

Heavy Bowguns do not only differ in their ammo choice, but in how they behave as guns. They have three stats, Deviation, Recoil, and Reload, which all affect how useful they are in battle. 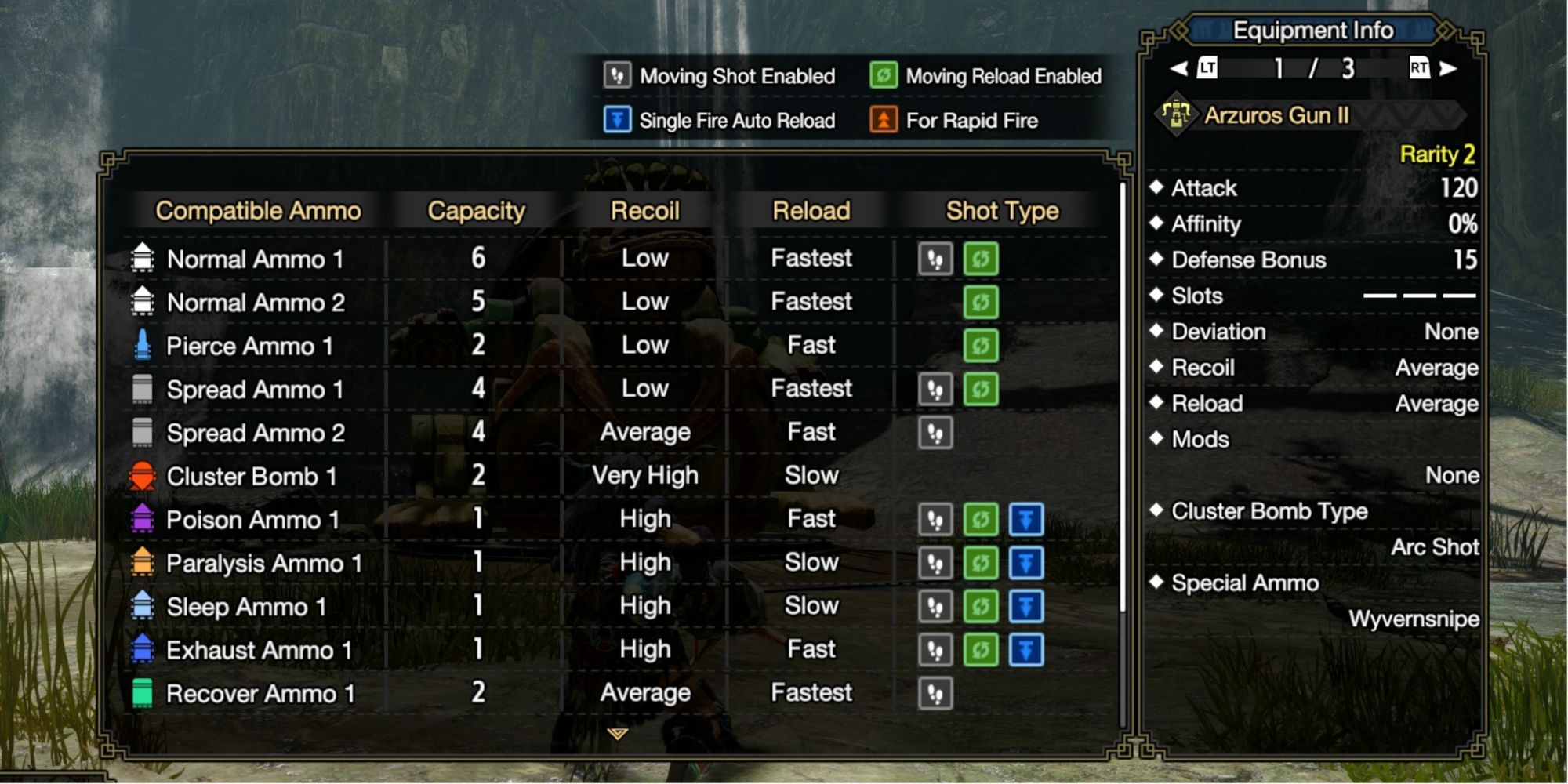 Different ammo types will also influence these stats. For example, Cluster Bombs will always have a far higher Recoil than Normal Ammo. You can see the specifics by heading to your Equipment Info menu and hitting Y/X to open the Ammo Details screen.

It is possible to customize your Heavy Bowgun with one of two mods.

The bullets above your ammo menu are gauges. Using your Special Ammo will drain the gauge, at which point you'll have to wait for them to refill before loading up another one.

It is possible to load up Special Ammo before the gauge has been refilled. To eject Special Ammo, just hit A/B again. 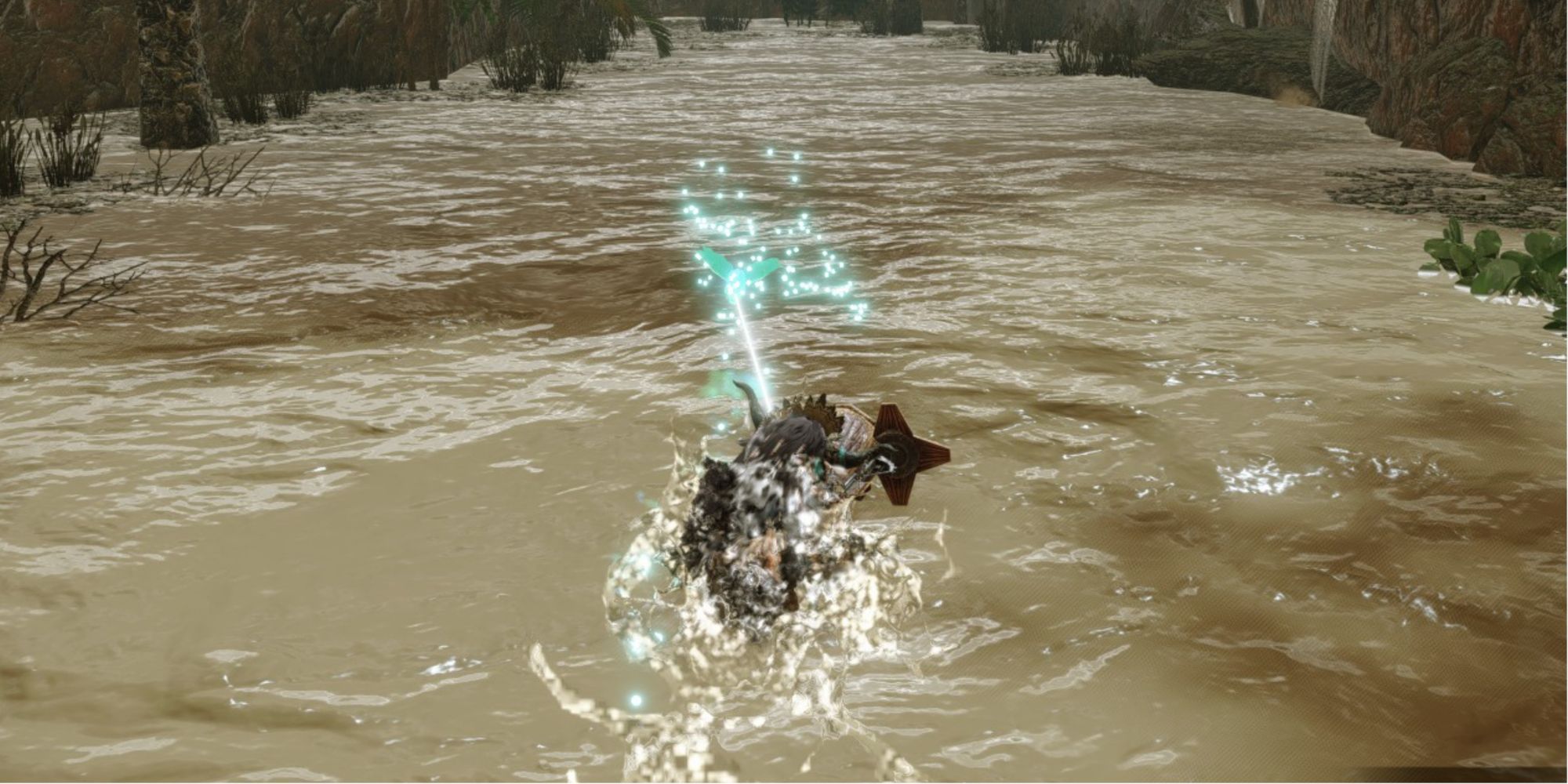 Counter Shot (RB/R + X/Y): This move puts you in a defensive position, anchored to the ground with Wirebug tethers. If you get struck by an attack, you'll absorb it. You can follow up a block with a very powerful shot that will also send you flying backwards.

Counter Charger (RB/R + X/Y): This move is a parry that will entirely negate an enemy's attack. It will also give you a buff that lets you charge up your shots quicker.

Free Silkbind Glide (RB/R + A/B): This move will pull you forward at high speed. It can be followed up by a melee attack (X/Y + A/B) or a faster sheathing animation than usual (Y/X). This is good for getting around a battlefield quicky without putting your weapon away, but does have a long cooldown animation if you don't use it to attack or sheathe.

You can tell whether you're in the correct range for max damage or not depending on the color of your targeting reticle. 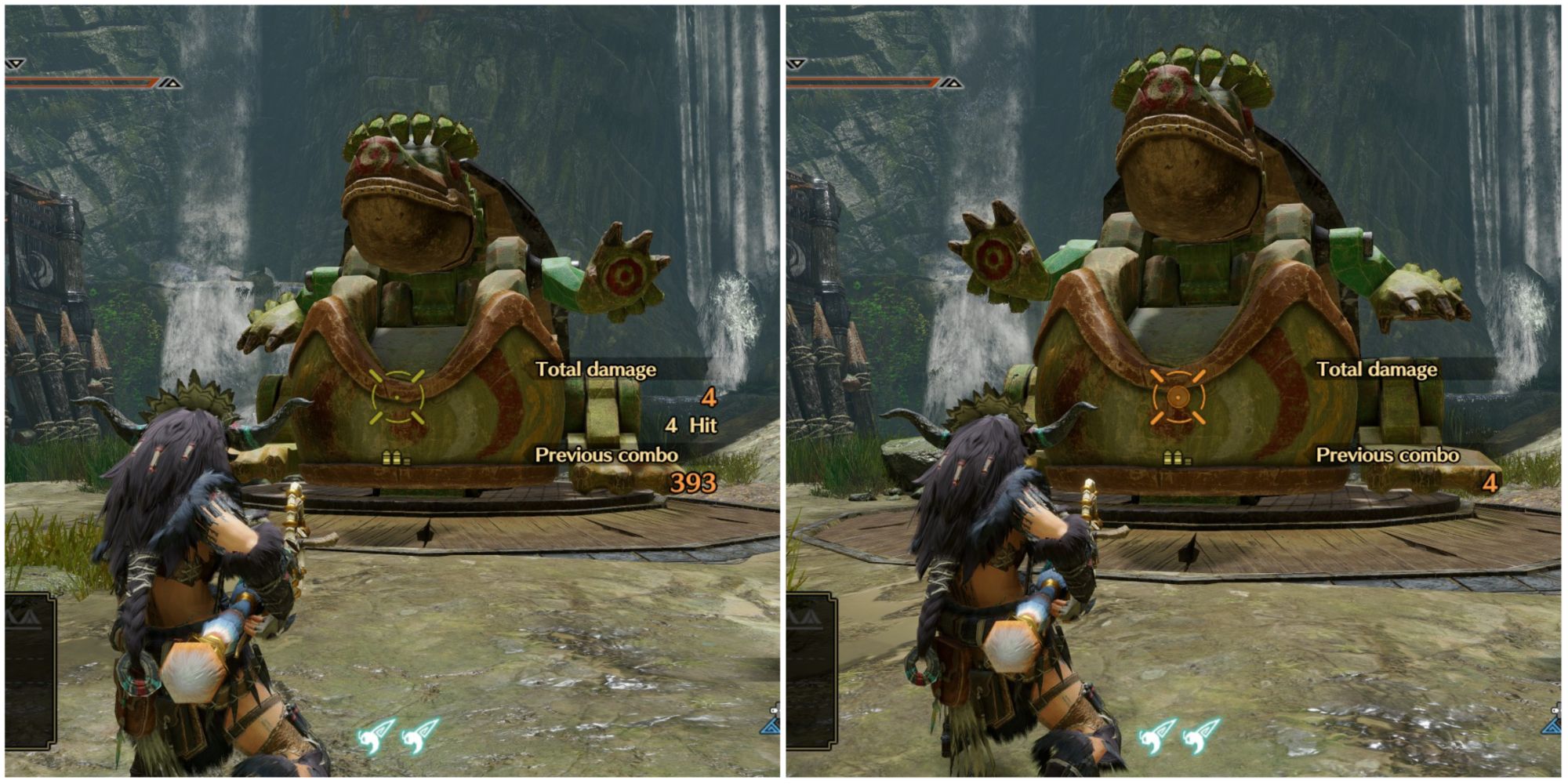 If the reticle is yellow in color, you'll do minimal damage with whatever ammo you're using. Move closer and it'll turn orange, showing that you're in range. This is more noticeable with Spread Ammo, which needs a very close range to be effective.

This is not true with Wyvern Ammo – the game will tell you outright that you're not close enough with this ammo.

Head To The Training Area

Utilizing the Training Area – which is accessible by interacting with the small boat in the Buddy Plaza – is more useful than usual when it comes to Heavy Bowguns.

The reason for this is that you can practice your ranged attacks against moving targets and you have infinite ammo to experiment with. You can use this to get your timing down for charged shots and Wyvern Ammo shots.

The Guard mod is very powerful, and more universally useful than the Power Barrel if you take steps to augment it. Specifically, investing in the Guard or the Guard Up skills would be a huge help.

Guard will improve your blocking skills, meaning you take less stamina damage and are less likely to get knocked back. Guard Up will enable you to block normally unblockable moves – and while they'll still do damage, the damage will be reduced.

Both of these ranged weapons have a lot going for them, but there's bound to be one that catches your imagination more than the other.