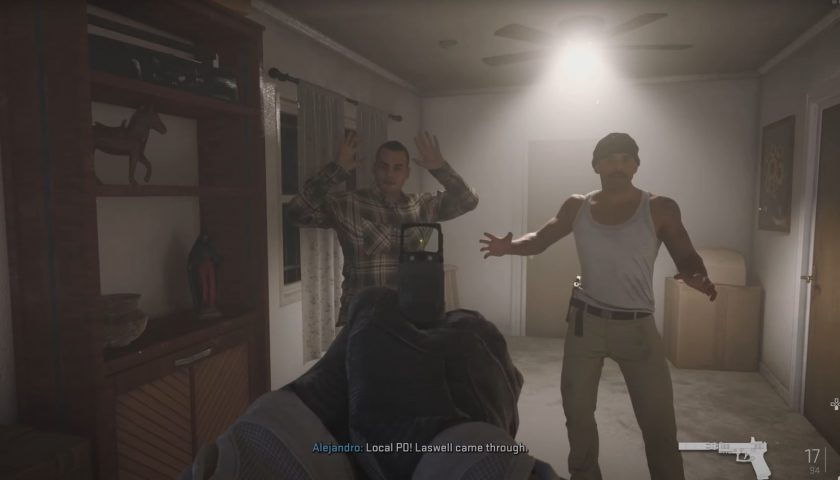 The same game franchise that taught players the best way to pay respects to a fallen comrade is to press F has returned with a novel method for de-escalating a tense situation.

Call of Duty Modern Warfare 2 footage is surfacing on social media from players that have early access. We're learning that the game has gone to great lengths to replicate the city of Amsterdam, but a believable interaction between Texas residents and special forces personnel is apparently too much for Call of Duty to handle.

At some point during the campaign Task Force 141 gets sent to a trailer park. Armed soldiers walking through a man's front yard aren't taken kindly to in Texas, so a local comes out to give these unctuous soldiers a piece of his mind. The player is then told to "de-escalate" the situation by aiming their gun at the civilian family.

Polygon did some extensive research to determine if any law enforcement or military manual recommends aiming a gun at someone to de-escalate a situation, but I'll cut a long story short and say that there just isn't. Aiming a gun never makes anyone feel calmer. Quite the opposite, in fact.

Call of Duty is no stranger to controversy, as exemplified in an image of the original Modern Warfare 2's infamous No Russian mission. From the looks of things, the new Modern Warfare 2 will have plenty more questionable takes on war, politics, and appropriate behavior for heavily armed soldiers.

Just remember that drawing a firearm will never de-escalate anything for anyone, ever. You can press F to pay respects as much as you like, though. Call of Duty Modern Warfare 2 arrives on October 28.