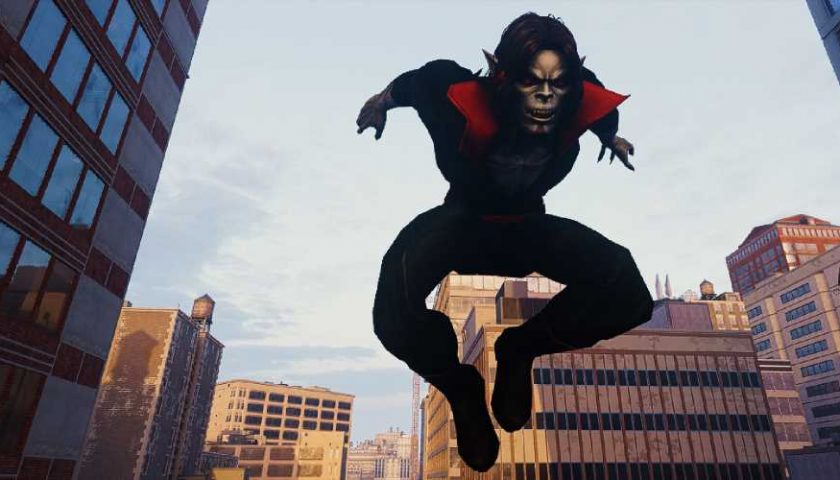 Morbius is already in Spider-Man, but he isn't the Living Vampire yet. He's Morgan Michaels, a respected doctor who is holding onto the only sample of Devil's Breath, and he ends up helping Spider-Man out with his little Mr Negative problem. But that isn't enough for modders, who have now made Morbius a playable character, donning his comic-y vampire getup.

Pointed ears, red eyes, jagged yellow teeth, long ragged black hair, bright red jutting collar, and a black skinsuit – Morbius jumps right from the pages and into Spider-Man Remastered thanks to this PC mod. It comes from HiBlakkes who dubbed it the "Morbillion Power", replacing the Advanced Suit.

The Advanced Suit is earned early on in the story – it's the rejigged Doctor Octopus design that puts a white emblem over the front, the one plastered across marketing. It's the 'canon' suit that Spider-Man wears in the story and when he appears in comic crossovers. All of this is to say that his default outfit is now Morbius. This is Morbius's story now.

As you can see, it's the comic suit, pulling from Gil Kane's original design. It's not Morbin' Morbius Jared Leto from Sony's hit two-time releasing blockbuster. Is that joke dead yet? Probably.

Spider-Man mods started with the symbiote suit, other film outfits, cartoon costumes, and fan-requested getups, but they've since spiralled into the cursed and chaotic, with CJ from Grand Theft Auto: San Andreas, Kermit the Frog, and even Kingpin being made playable. Morbius joins that long list of horrifying suits, though the game already features alternate reality Spider-Men and literal cartoons, so it's not far-fetched to turn him into his own villains. Maybe next game we'll get an official Venom skin.

Hell (geddit?), someone even turned Spider-Man into Daredevil. It's probably the closest thing to that Naughty Dog Daredevil game that everyone's been clambering for in recent years.