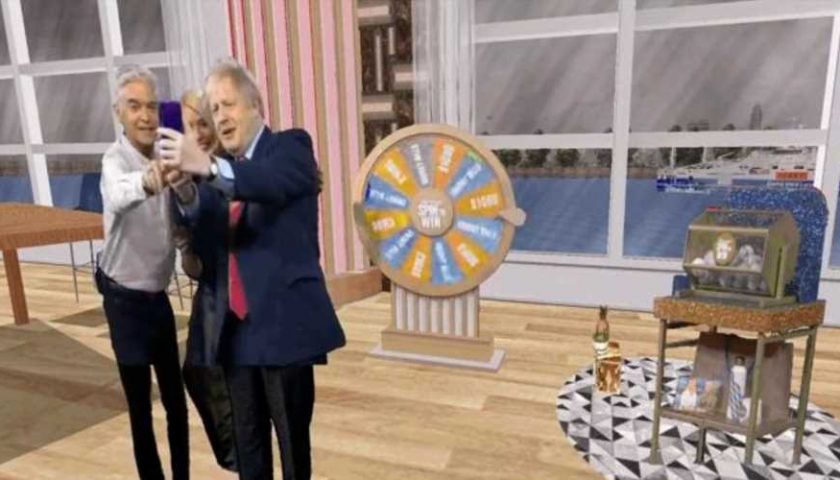 The only good thing about anything bad happening in Britain as of late is that after it happens, it appears hours later in Duke Smoochem 3D. That was the case earlier this week when This Morning's spin the wheel to have your energy bills paid Black Mirror-style segment went viral.

If you're unfamiliar with Duke Smoochem 3D, it's a project filled with British memes and news stories created using the same engine as the one that built Duke Nukem 3D, hence its name. Dan Douglas is the diligent creator who has been adding to the mod over time, and since the bad news wheel rarely stops turning, it received a couple of content updates this week (via NME).

The first was that aforementioned energy bill wheel, complete with the This Morning studio and hosts Phillip Schofield and Holly Willoughby posing for a selfie in front of it with Boris Johnson. If you've been steering clear of Twitter this week, which might be advisable, the segment came under fire on Monday for its somewhat dystopian reaction to the ongoing energy price rise crisis in the UK.

Later that day, Liz Truss was revealed to be the new British prime minister. A busy day for Douglas who then proceeded to add some “tory scum” graffiti to their growing virtual world as well as the front page of the Daily Mirror covering the news.

Both of the new additions join a number of other elements inspired by British news and culture. A Greggs that was refurbished a year ago, a virtual recreation of Matt Hancock's office, and of course, Binley Mega Chippy. Not to be confused with the giant walking version added to Elden Ring.

Douglas has been adding to Duke Smoochem 3D for well over a year at this point. It still isn't something others can freely access, though. Douglas revealed he would like that to be the case one day, but it will be more of a virtual museum for people to walk around and enjoy as opposed to a Duke Nukem game set in a futuristic dystopian Britain, or maybe that should be present-day dystopian Britain.