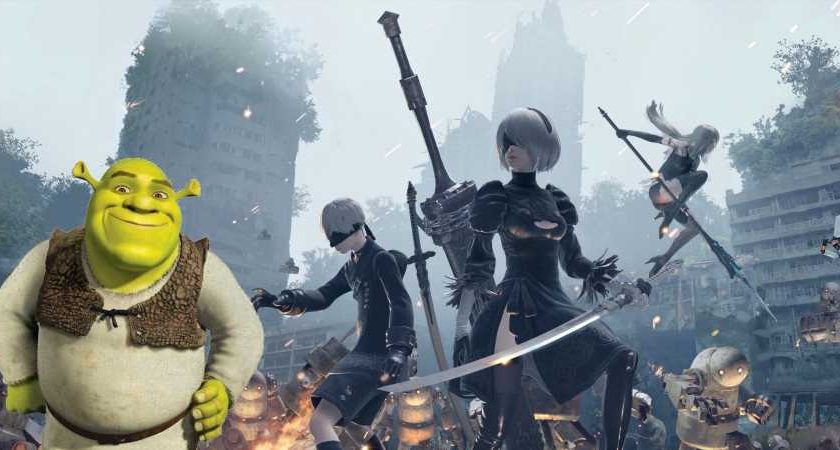 As if the post-apocalyptic world of Nier Automata could not be any more terrifying, someone has modded everyone’s favorite ogre onto one of the massive machine enemies. Now, players must face off against a building-sized Shrek as he launches missile-projectiles from his back and pummels you with his ginormous green fists.

The mod in question comes from user DevolasRevenge on Nexus Mods. Aptly named “Shrek Automata”, the user describes what exactly this mod will do, though its pretty obvious from the start what anyone who downloads this is signing up for. In the notes for the mod, DevolasRevenge comments that this mod is primarily a joke and was not given the high-level of attention that most mods are. As such, the mod still utilizes the original Engels machine normal maps. The modder also noted that the Shrek model will look very strange because “it’s Engels’ skeleton over a proper humanoid. His rig and animations are made for a robot and getting it to work with Shrek was a real pain.” Sounds like there aren’t too many onion-layers to this particular Shrek, but it is still terrifying nonetheless.

You can catch monstrous Shrek in action over on Reddit where a user has posted a quick video showing the ogre taking on a player. It is truly a sight to behold and one nobody truly expected to come from the 2017 RPG. While the video is great, the comment section is filled with some great fun at the expense of good old Shrek. While some commented that Square Enix probably feared this kind of power and intentionally released the PC port with so many issues, others are busy making some great puns out of the mod. For instance, within Nier Automata there are 26 possible endings, each given a letter of the alphabet. Naturally, people are commenting on how this version of the game is the true “S” ending. After one user commented that this was “The Real Ending [S]”, others began titling the ending with some great Shrek-related puns like “Get Out Of Me [S]wamp” and “[S]omebody Once Told Me”.

No matter what it is called, I think everyone can agree that it is equal parts terrifying and hilarious. It is definitely a good reason to stay out of the swamp. You can download the Shrek Automata mod for yourself here, no questions asked.