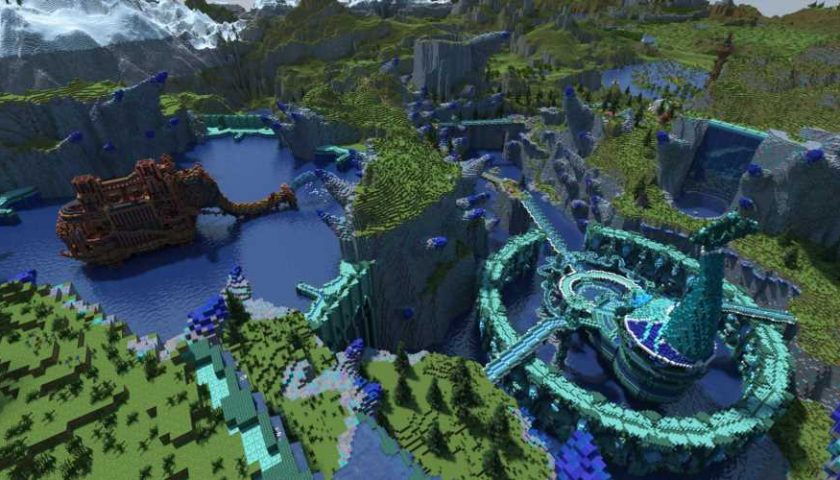 Minecraft has given its players so many tools for creative building that pretty much anything you can think of, you can build. This has led to some pretty spectacular creations, but one player looking to get up there with the best of them is attempting to do by recrating the entirety of The Legend of Zelda: Breath of the Wild with astonishing detail, including every town, village, and stable.

Redditor lg_cuber (also going by Grazzy on YouTube) shared their creation with the Breath of the Wild subreddit, which they reckon is currently 25 percent complete. In this this particular update, Grazzy shows off the completed Zora Domain, complete with castle and Divine Beast Vah Ruta in the huge lake players swim around with Sidon.

Grazzy explains to another user that in order to accomplish this feat, they started by "importing a height map" into World Painter which gave them a basic landscape to work with, albeit with no details. With this base, Grazzy has been slowly and painfully adding caves, forests, stables, and everything else players encounter during their time in Breath of the Wild. It's going to take a while before Grazzy finishes the entire project though, as the Zora domain apparently took almost 5 months to finish. If you want to see a more detailed explanation, Grazzy has a video on their YouTube channel which you can find embedded below.

You probably won't be too surprised to learn that other Minecraft players have recreated other popular titles, one of the more impressive examples being a recreation of Bloodborne's Yharnam. The build doesn't recreate the entire game like Grazzy's, but it does include buildings such as the Astral Clocktower, Iosefka's Clinic, and the Cathedral Ward Gate. Now if you don't mind me, I'll be putting some windows in my mud hut.