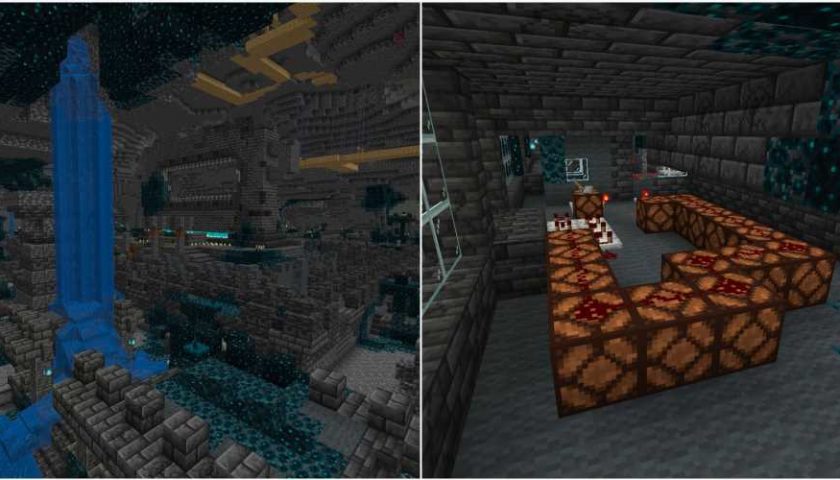 Minecraft's Deep Dark biome and the Ancient Cities it contains are home to numerous rare and valuable treasures. Exclusive enchantments and music discs, along with the helpful recovery compass, can all be found within the walls of the mysterious underground settlements.

Ancient Cities also play host to a more curious secret, however. Buried beneath the portal-like structure in the centre of the city, locked away behind a secret door, is a hidden room filled with redstone contraptions, aiming to demonstrate technical mechanics to players. If you'd like to find and explore this secret room for yourself, here's everything you need to know.

What Is The Secret Redstone Room? 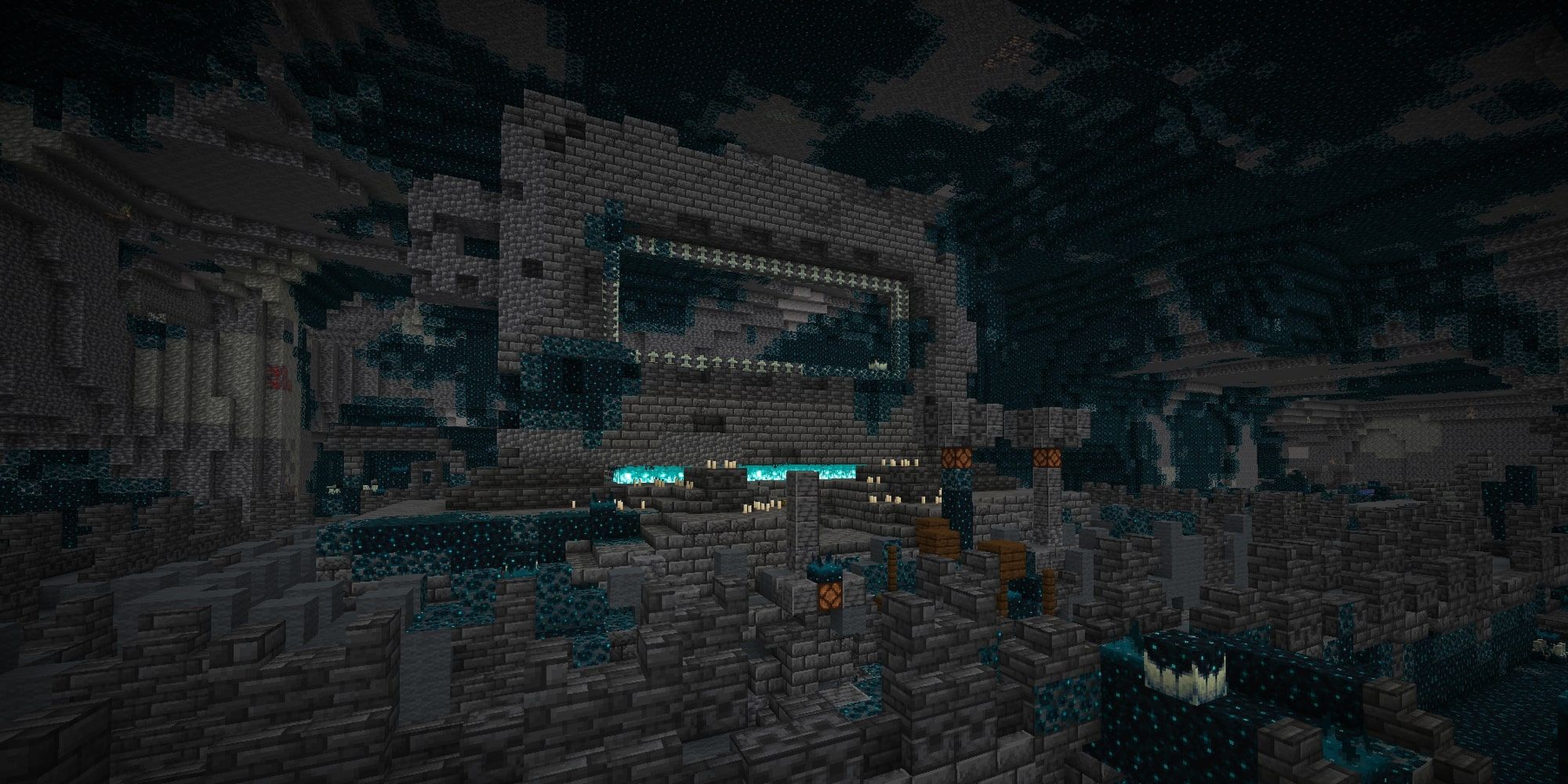 Ancient Cities are sprawling underground structures that generate very rarely in the Deep Dark biome. The exact layout of an Ancient City is randomly generated, so you'll see different structures making up each one, but every Ancient City generates with a large portal structure in the centre.

This portal is large, rectangular, and made out of reinforced deepslate. In front of the portal is an area that resembles an altar, laden with candles, that has a large staircase leading up to it. Two walls surround the portal area, with a trench-like channel between them, and tunnels and walkways run from the edges of the city to the portal area in the four cardinal directions.

It's important to understand how the Ancient Cities are laid out, as this information is key to locating the secret redstone room. This room is hidden directly under the structure on which the portal sits, and is divided into several smaller rooms, each one containing a build that aims to teach the player about redstone.

How To Find The Secret Redstone Door 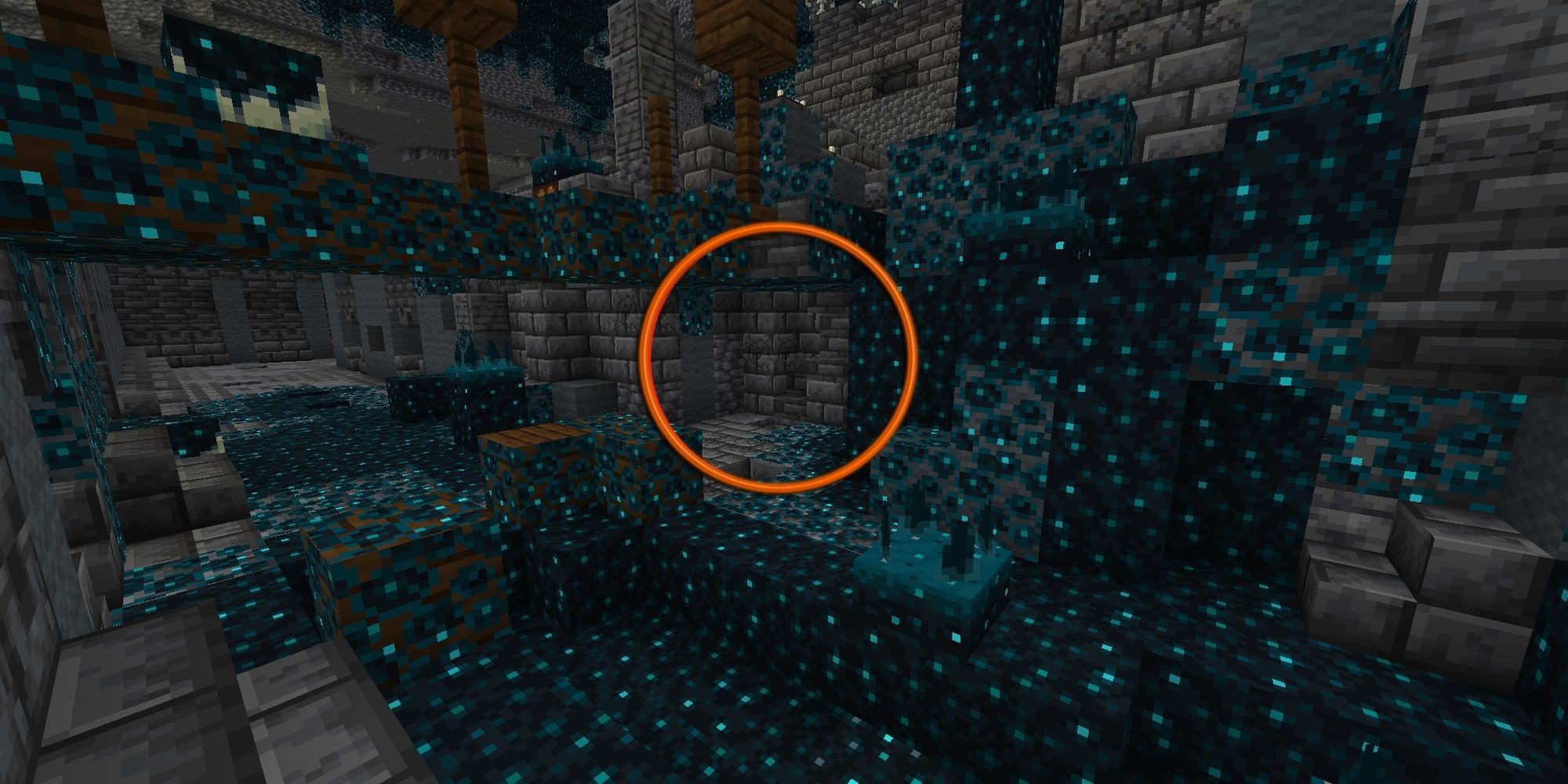 The redstone room is concealed by a secret door that uses pistons to blend in with the wall. Fortunately, locating the door isn't too hard if you know where to look. Approach the portal structure from the side with the altar, and drop down into the trench area between the two walls. Stand in front of the very centre of the portal, underneath the bridge to the altar, and you'll see a recessed area in the wall.

This is where the secret door is located. The door itself occupies an area three blocks wide and two blocks tall, but the two blocks in the middle don't open. They act as a central pillar, while two player-sized one-by-two areas open on either side.

How To Open The Secret Redstone Door 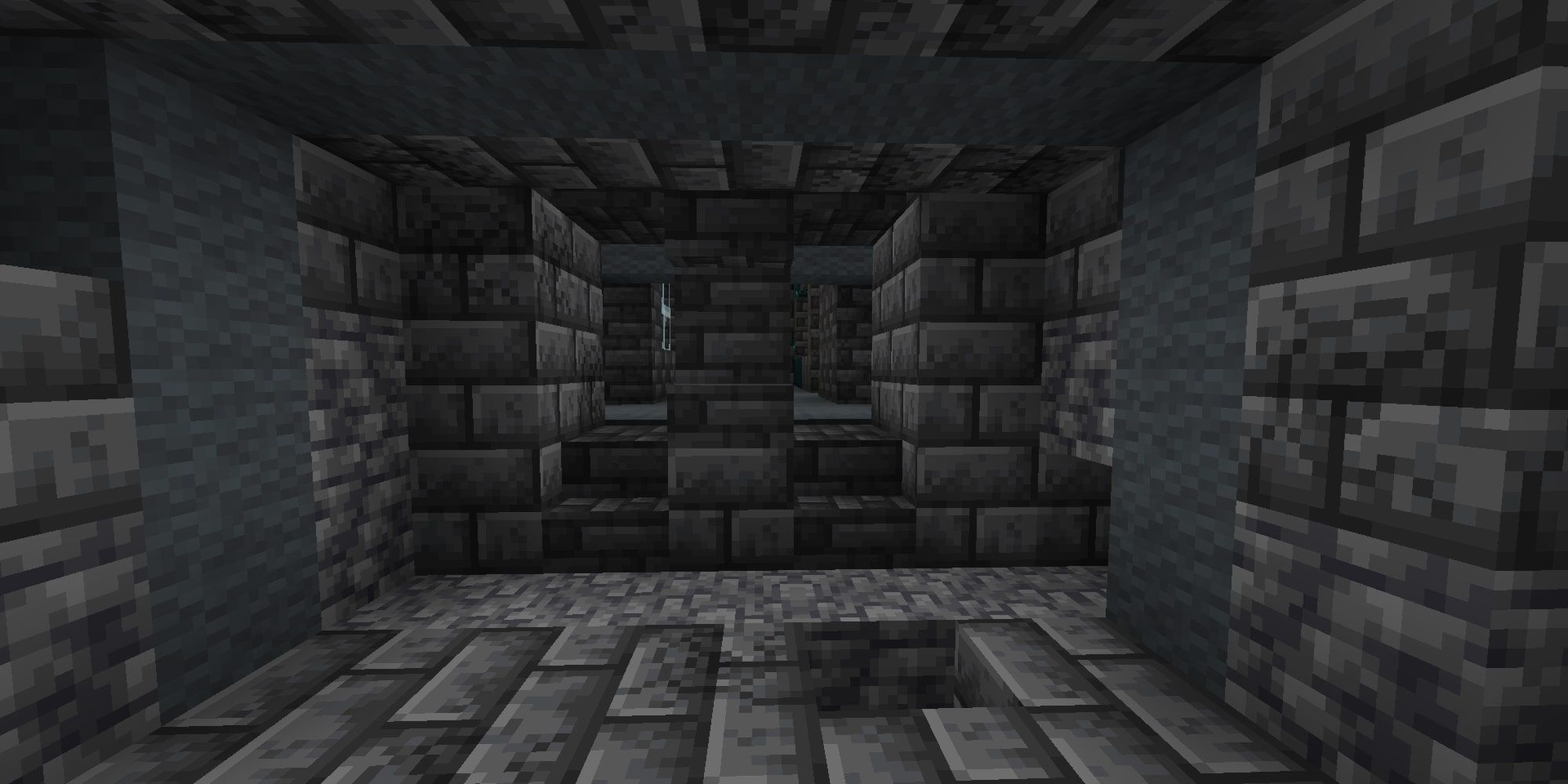 Now that you know where the door is, it's time to get it open. Unfortunately, this part is a little more complicated than just locating the door. While the same large portal structure is always generated in every Ancient City, there are actually three possible variants for the redstone room hidden below, with each Ancient City generating a random one of the three.

The three possible redstone rooms are largely the same, but what differs in each one is the mechanism used to open the door. Given that the room is hidden, it's impossible to know which variant of the room you have, and therefore which mechanism controls the door.

Of course, you can just mine through the door, but if you want to do things the "proper" way, below are the three different door mechanisms. 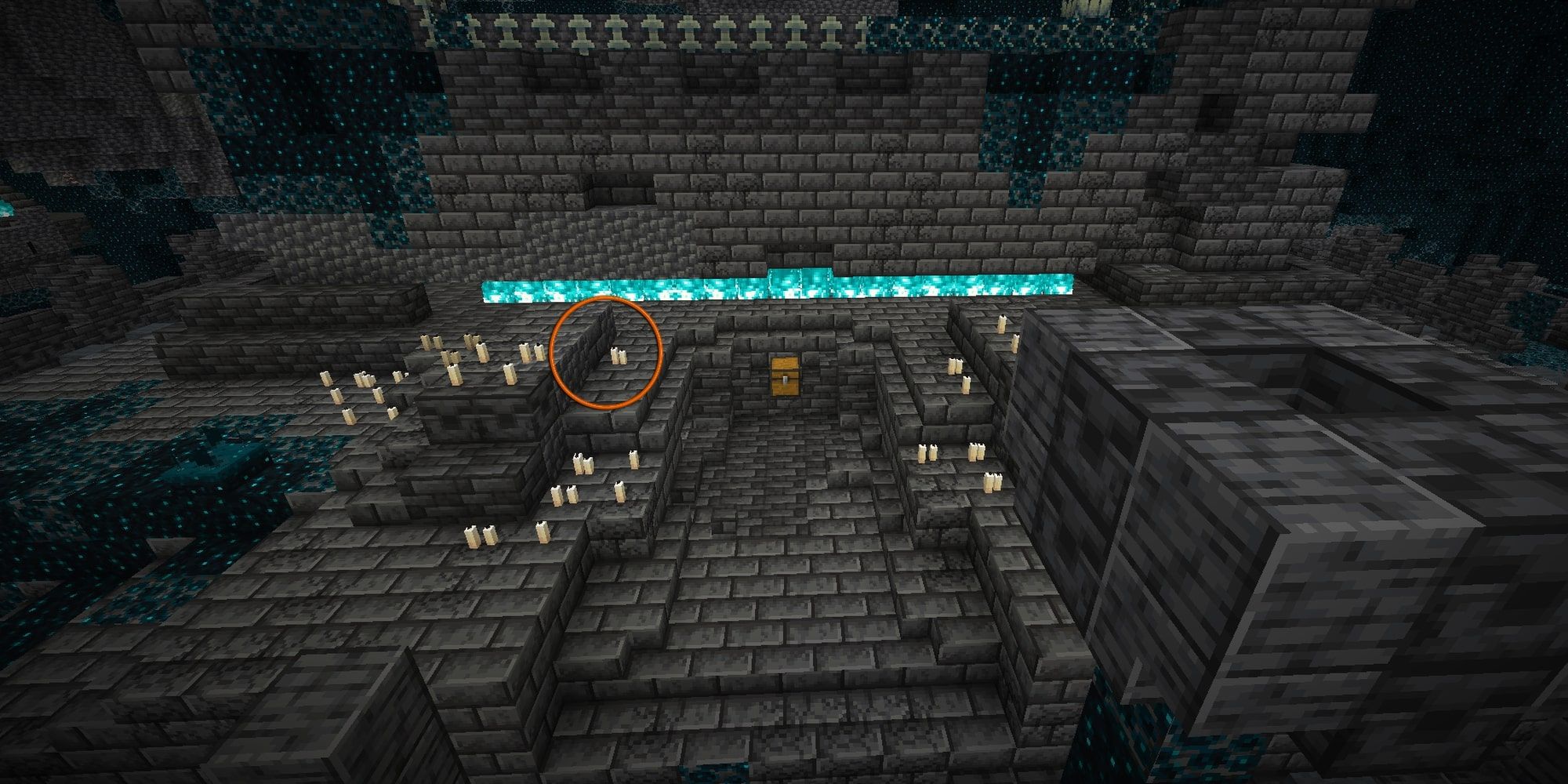 The first mechanism is arguably the simplest. It uses a Sculk Sensor (which is submerged, preventing any noise and cluing players into the existence of the secret room) to control the door – as we'll see, this is a key component for all three mechanisms. The gimmick is simply that the Sculk is very heavily occluded with wool. Because of this, making some noise to activate it is difficult, as the wool blocks the sound from almost every direction.

The only accessible location not occluded with wool is directly above, so make your way up to the altar and stand against the raised section on the left-hand side as you face the portal. Jump up and down until you hear the pistons activate – the door will have opened, allowing you to head inside and explore the secrets the hidden room has to offer.

The only other parts of this circuit are a redstone lamp with a lever, which both allows the door to be permanently opened from the inside (and perhaps aims to teach players that lamps are solid blocks), and a pulse extender, which gives you plenty of time to make it down to the door once you activate it. The large chain of lamps are just a visual aid to demonstrate how the pulse extender works, switching off one by one as the comparators gradually lose signal strength. 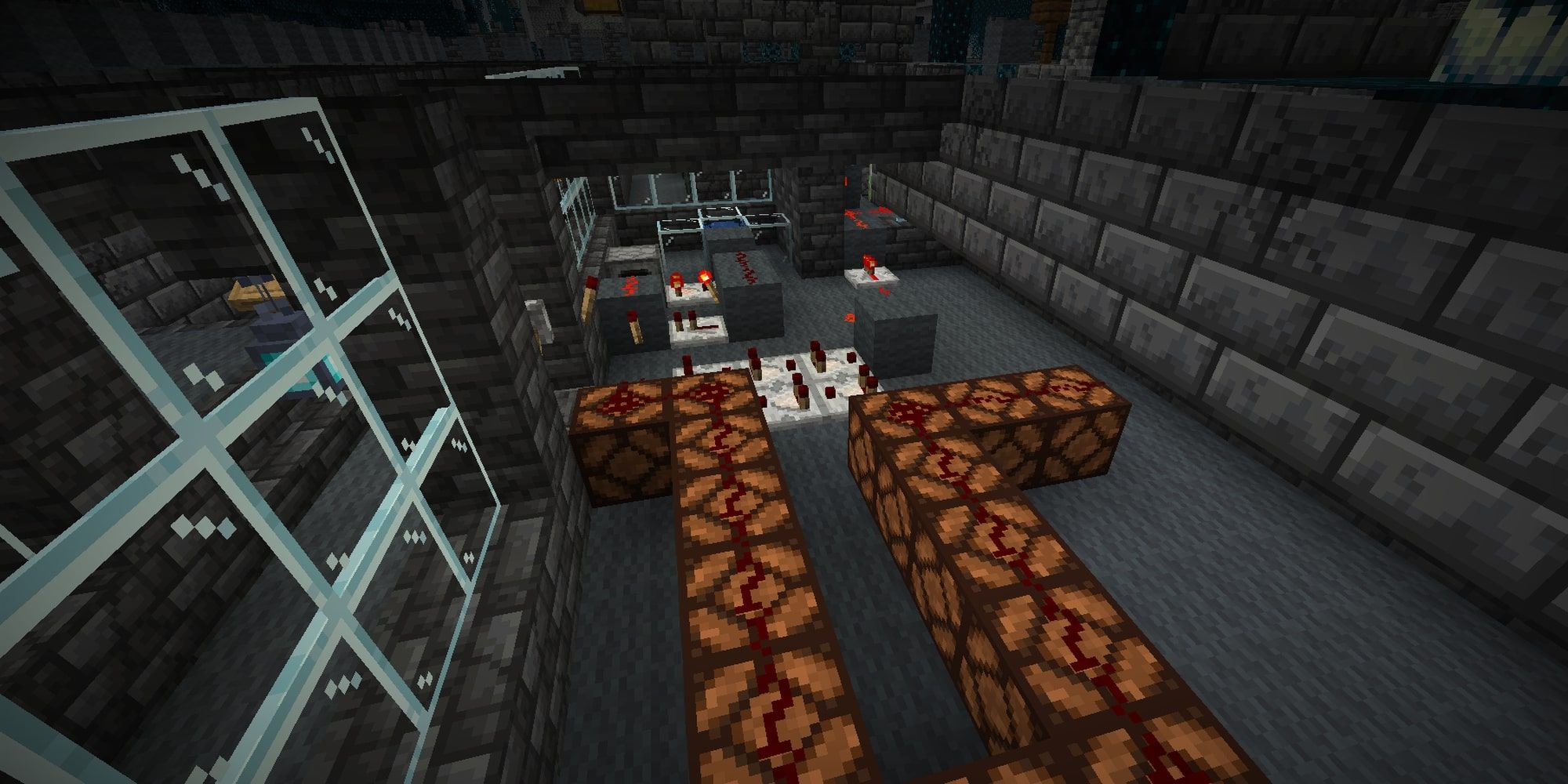 The second mechanism is a little more complex, as it aims to further teach players about comparators. It features a comparator, taking input from furnace that's been very deliberately half-filled to a specific amount, feeding into another comparator in subtraction mode. This subtraction comparator is taking its input from a Sculk Sensor, which is again how the door is to be opened.

The comparator circuitry runs into a small circuit that will only allow signals of exactly one signal strength through – anything more, and the repeater will activate, shutting off the circuit. The idea here is that you have to produce the right kind of vibration to create the right level of signal strength from the Sculk so that after the furnace's signal strength is subtracted, you're left with a strength of one.

The furnace outputs a signal strength of seven, meaning a vibration that will output eight from the Sculk Sensor is required. There are a few ways to do this, but the easiest is eating. Simply chow down on whatever food you have to hand, and the door should open. The exact positioning for this can be a little finicky – it works best if you stand right against the door, on the left-hand entrance.

Like mechanism one, the other circuit in the door control room is just a pulse extender, with a chain of lamps to demonstrate what's going on. 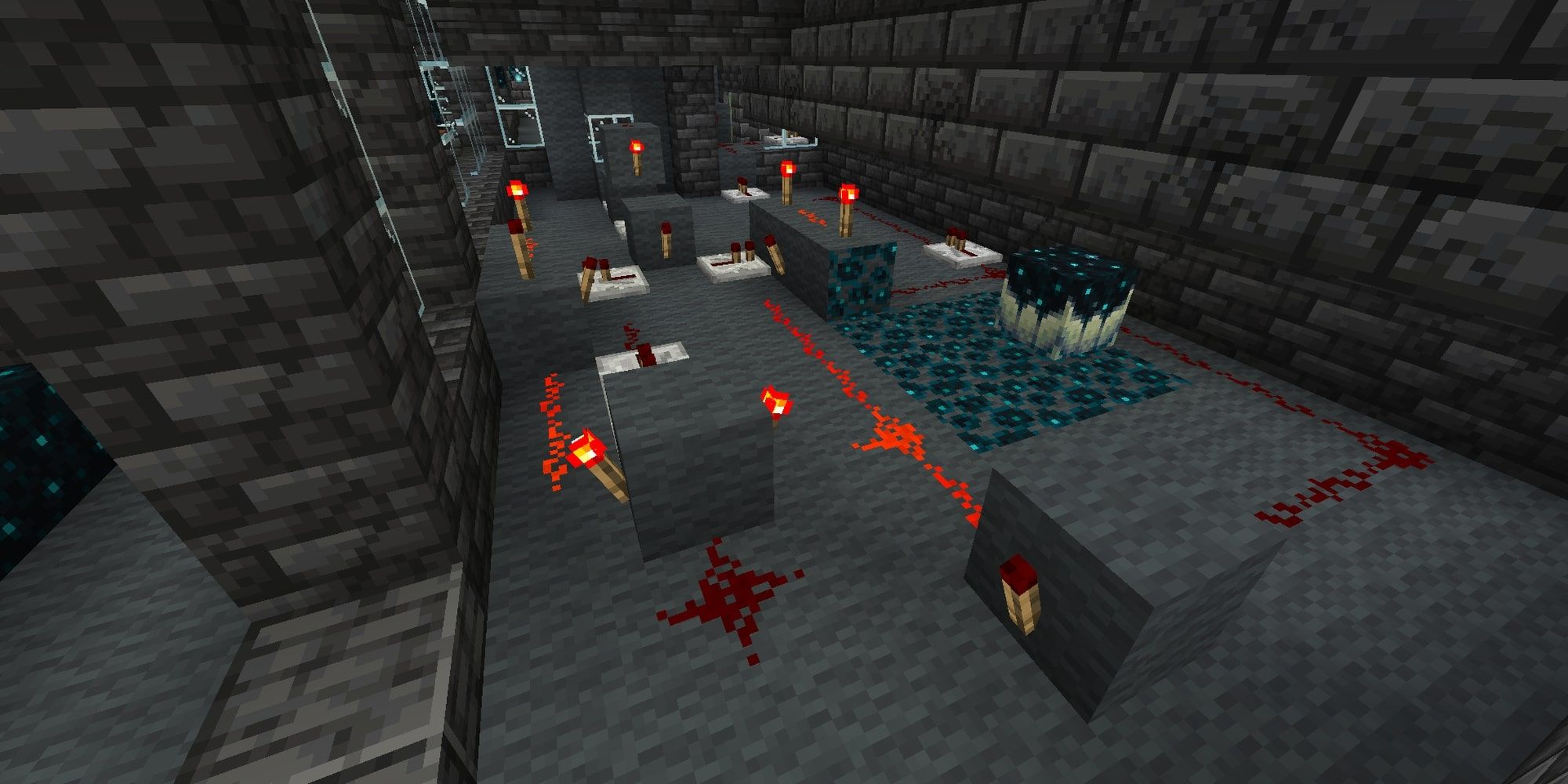 Mechanism three is arguably more complex than the others, but certainly more complicated than it needs to be. It features a sprawling mess of redstone that's been redundant since 1.5, acting as a toggle flip-flop, or t-flip-flop.

This is a circuit that takes a pulse – a temporary signal like that produced by a button (or Sculk Sensor) and turns it into a permanent signal, like that of a level. This means that, unlike the other two mechanisms, once you get the door open, it's staying open. No pulse extenders here.

As for how the door is opened, it's more or less identical to mechanism one. The Sculk that provides the t-flip-flop with a pulse is occluded by wool in almost every direction, so head to the same spot on the altar as before and jump around to make some noise. The door will open, and due to the t-flip-flop, it will stay open until the Sculk receives another pulse to close it.

This knowledge is all well and good, but given that you have no way to know which of the three-door mechanisms you're facing, how do you know which opening procedure to go for? Well, fortunately, if you eat at that particular spot on the altar, it works as a vibration for doors one and three, and door two will still pick it up. This essentially makes it a "skeleton key" method you can use to open all three doors: go up to the left-hand-side of the altar, eat, and no matter what mechanism has generated, the door should open.

What's Inside The Secret Redstone Room? 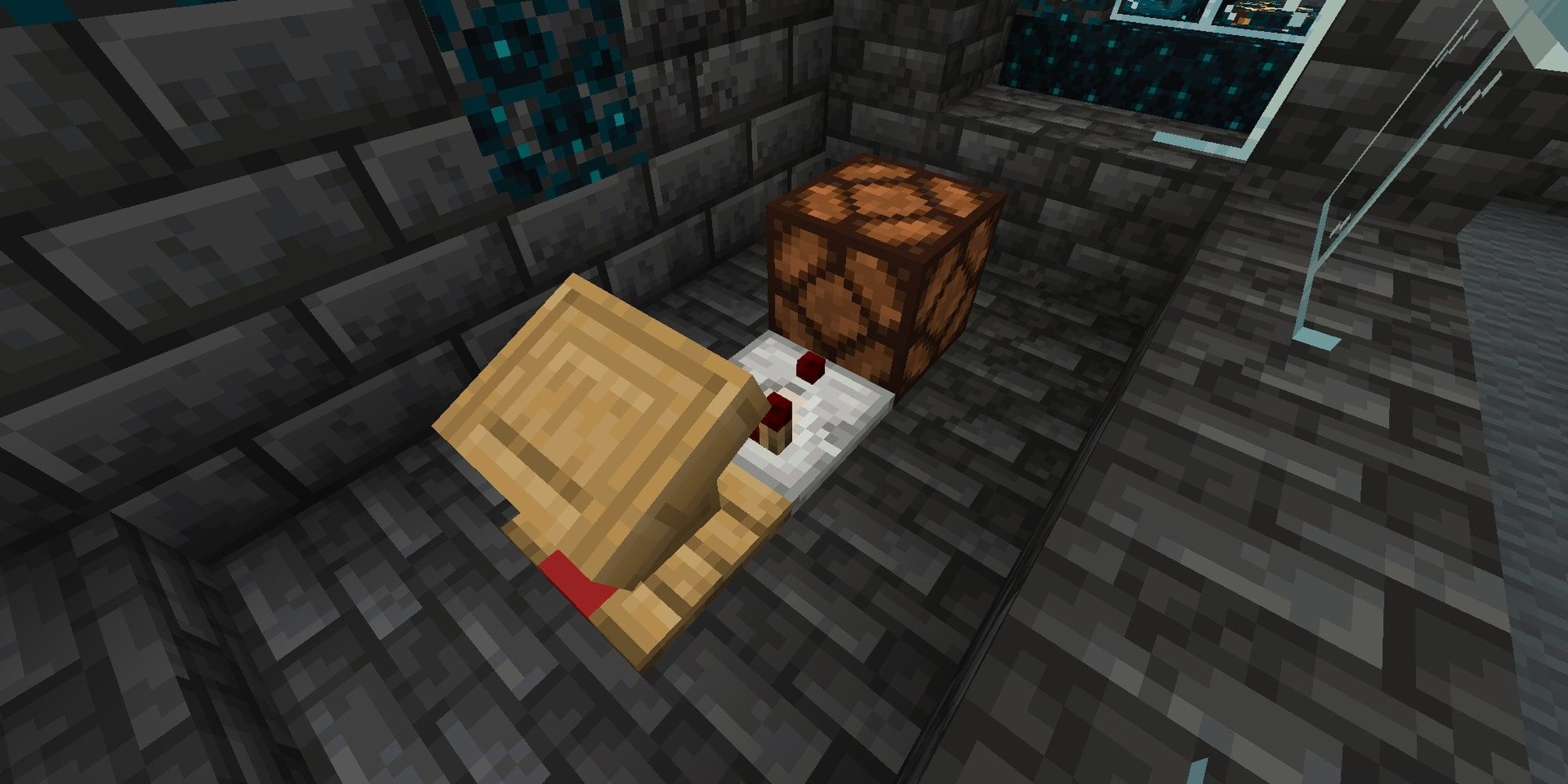 In addition to the room with the circuits controlling the door, there are three other rooms with circuits that aim to teach players useful redstone principles. The first features a lectern with a comparator running out of it, into a lamp. This demonstrates that comparators can take output from many different blocks, although not that the signal strength will vary depending on the page the book is opened to. 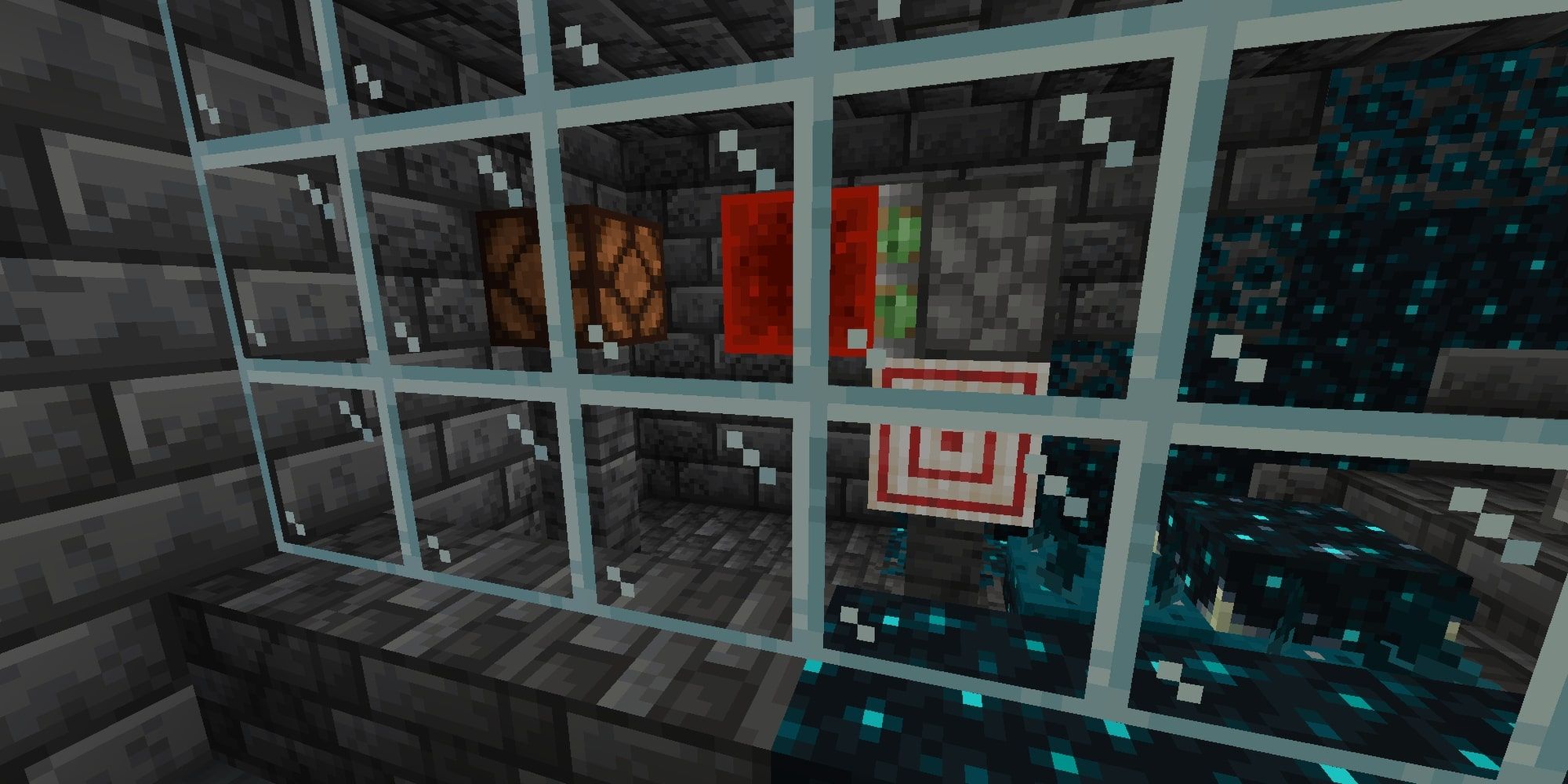 The next room has a small circuit of a target block hooked up to a sticky piston that pushes a redstone block into a lamp. This demonstrates the functionality of target blocks, and showcases how redstone blocks can act as a moveable power source. 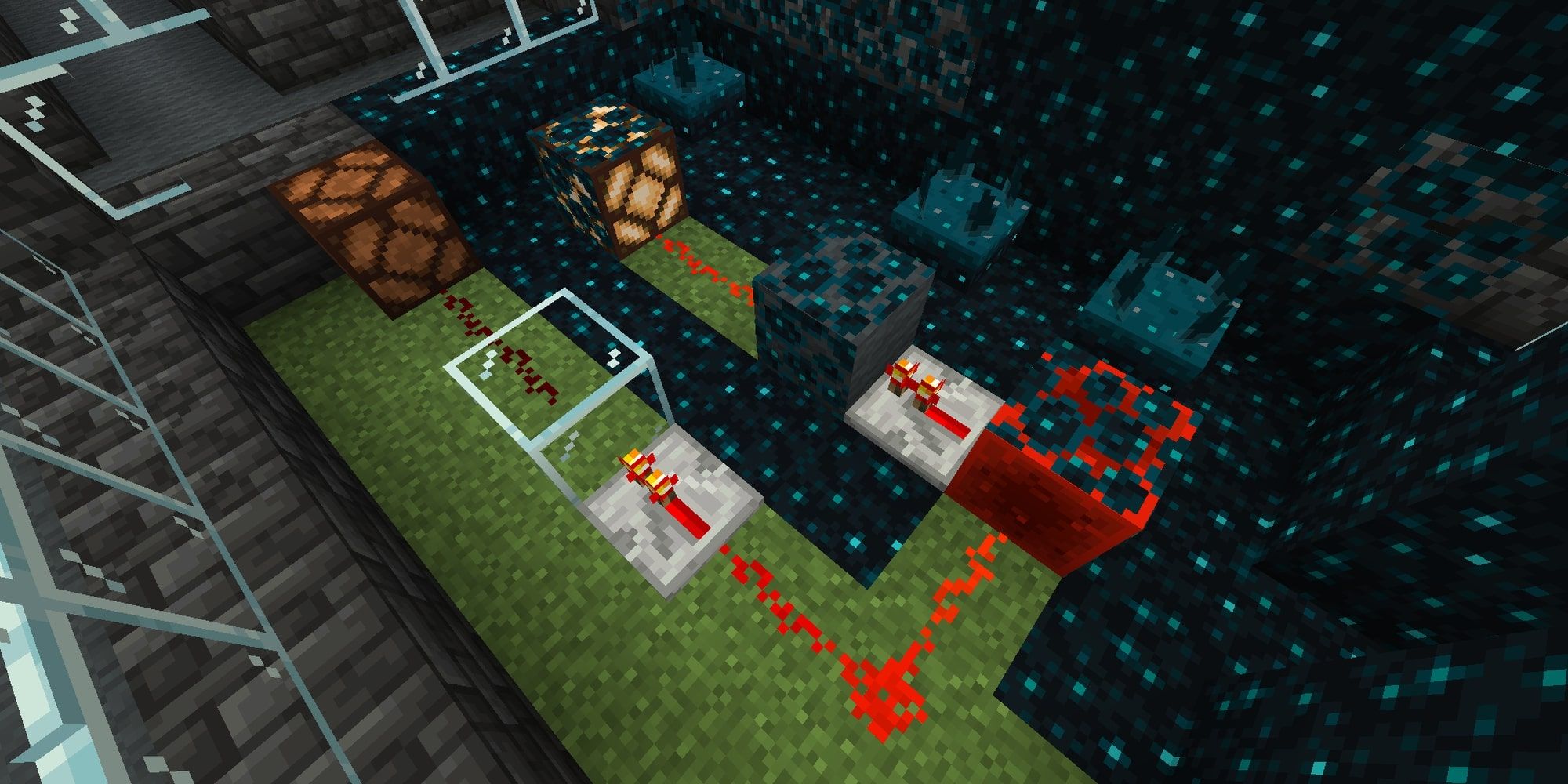 The final room showcases by far the most useful principle for newcomers to redstone. It shows a redstone block feeding power into two repeaters, which run into a wool and glass block respectively. Redstone dust on the other side runs into two lamps, and the lamp connected to the wool circuit is powered, but the glass one is not.

This demonstrates transparency. Solid blocks can essentially conduct redstone signal, but blocks the game considers "transparent" – such as glass, glowstone, and any non-full blocks like stairs and slabs – cannot. A very key idea to understand when working with redstone.