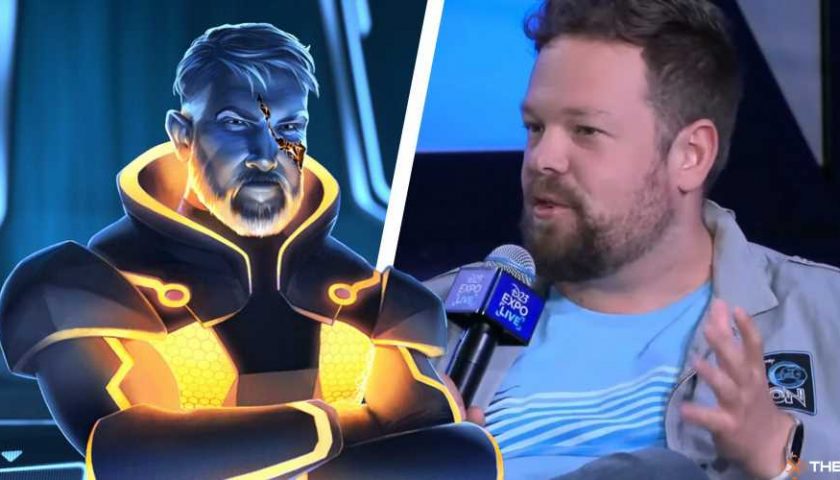 Mike Bithell, founder and creative director of Bithell Games, still can’t believe his studio is working with Disney on Tron: Identity. “How does that even happen?” he says during our post-reveal interview. It may seem like a strange fit, considering the kind of small, cerebral games Bithell is known for. Throughout his catalog of games, which includes Subsurface Circular, The Solitaire Conspiracy, and Thomas Was Alone, the studio has only developed one licensed game, John Wick Hex. Bithell jokes that perhaps Disney was simply attracted to the bright lights. “I think they looked at what we’ve made in the past and saw a lot of bloom and they were like ‘Oh, you like glowy things, let’s get you to do that.”

Of course, fans of both Tron and Bithell Games will immediately recognize how well they fit together. “Our stories have often revolved around science-fiction and choice-based narrative stuff,” he says. I think they saw those aspects and were interested in working with us in the Tron world.”

Disney approached Bithell specifically for Tron and asked what he would do with the IP, and he immediately had a sense of what that game would look like. “The immediate thing [that came to mind] was Subsurface Circular, but taking it to that next level. That kind of choice-based and character-led story stuff just felt like something I wanted to see a Tron game do.” Bithell and his team were inspired by the rich mythology and deep world-building in the Tron movies. “That was the stuff that got us excited,” he says.

The reveal trailer for Tron: Identity doesn’t give us much to go on, but Bithell says games like Subsurface Circular, Quarantine Circular, and The Solitaire Conspiracy are the “primordial ooze” the game was born from. “There’s a lot of lessons we learned making those games,” he says. “We were really happy with what we were able to do with character-led storytelling [with] Subsurface Quarantine, but a bugbear for me was the choices didn’t feel that important. You didn’t feel like you were writing the story with us.” Bithell says those lessons learned from past games have led up to Tron: Identity in a way, which is all about shaping character relationships and driving the story with your decisions. “This game feels like the pulling together of all those threads.”

The story of Tron: Identity begins in Tron: Legacy. Before Flynn gets trapped in the Grid, he manages to hide a number of ISOs from Clu in a temporary Arc server. Centuries pass in this secret server while the ISOs wait for Flynn’s return, and what was only meant to be a temporary refuge grows into a complex society. “This is a culture that’s grown up without Flynn,” Bithell explains. “What would the society-wide, culture-wide reaction be to a world created by users, but it’s never seen one? A world where users are a distant memory.”

There are no users, or human characters in Tron: Identity, which Bithell says opened the door for an interesting exploration into the culture, philosophy, and politics of this world. “You can talk about programs who still believe in the users and maybe some that think users never really existed,” he says. “As a sci-fi writer that’s just a fun canvas. It’s a really great way of telling a story that builds on and reacts to the Tron material that exists, but isn’t beholden to it and can go in its own direction a little bit.”

Bithell knows that “choices matter” can sometimes be overused to market games, but he says Identity doesn’t just count up all your choices at the end and decide whether you get the good ending or the bad one. “The frustration and limitation of that [kind of choice system] is that effectively the player is kind of gesturing [at] playing a good person or bad person in an abstract way, and then at the end you get a report card, you get an ending that reflects what you did,” he says. “That always felt very shallow to me. It feels like you’re not interacting with the choices you make.” In Tron: Identity, Bithell says your choices will have immediate consequences that redirect the course of the story. “There are several characters in the game you can just derez, and that will completely change the flow of interaction that you have from that point on,” he says. “There are characters you can befriend or become enemies with. There are characters you can let down or help. Those choices are in most cases very clear, but they can have surprising outcomes, and you’re dealing with those outcomes for the rest of the story.

“It’s not just about being good or evil. It is about making tough choices and dealing with the consequences. That’s more exciting to me as a storyteller.”

Tron: Identity is coming to PC in 2023. You can wishlist now on Steam if you can’t wait to reenter the grid.