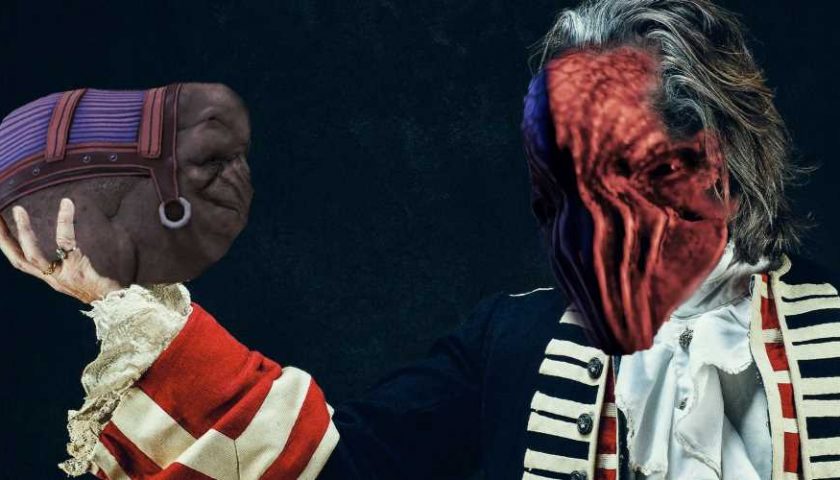 In Mass Effect, while riding the elevator on the Citadel, you can hear a short radio bulletin about an upcoming all-elcor production of Hamlet.

Elcors are a large, quadrupedal species from the planet Dekuuna. Most notably, they can't verbally express emotion. Their monotone voices are unable to modulate tone at all so, like someone adding /s to the end of a tweet to make it clear that they're being sarcastic, elcor must state the intention of everything they say. Each line of dialogue spoken by an elcor begins with tonal descriptors, like "Pleased greeting", "Genuine enthusiasm", or "Remorseful response."

The bulletin announcing the production states: "In entertainment news, Francis Kitt has announced plans to direct Hamlet with elcor cast members. The production will open dramatic theater to the elcor with a Hamlet who uses elcor body language and pheromones. Kitt claims he is also excited by giving a human audience the chance to judge Hamlet by his deeds and not his emotions."

This is my first time playing through the trilogy, so I was struck by this as a throwaway bit of world-building. But, in researching this piece, I found that it’s a small recurring thread that continues throughout the trilogy and into Andromeda. A home video release is advertised in 2 and, in 3, Shepard can meet the actor who portrayed Hamlet, who will recite lines and ask you to recommend an agent. Later, in Andromeda, Ryder can ask their angaran companion, Jaal Ama Darav, to let them know when they find a recording of the play.

But, even without the bit's return in the Mass Effect sequels, it captivated my imagination. It shows that the team at BioWare thought through the implications of their decisions. The best creative work — whether fiction, documentary, journalism, sculpture, or anything else — usually shows evidence of having been given a great deal of thought. Sometimes that isn't the case; Jack Kerouac legendarily wrote all of On the Road in three weeks on a 120-foot long roll of tracing paper. Art can be created by purposefully abandoning thought, too. But, in speculative fiction like Mass Effect, or The Expanse series, or A Song of Ice and Fire, the details that really sell a universe are the small things that only a creator who really lived with the work, pondering its ins and outs, would even think to think of.

Elcor Hamlet is that kind of detail. The elcor are an interesting species, but like their voices, their portrayal could easily become one note. Though the elcor sound like robots, the Hamlet bit serves to carefully distinguish them from artificial life. Their personhood looks different from Shepard's, but the elcor are living beings with the desire to create and experience art. That art may just look a little different from the kind humans would produce.