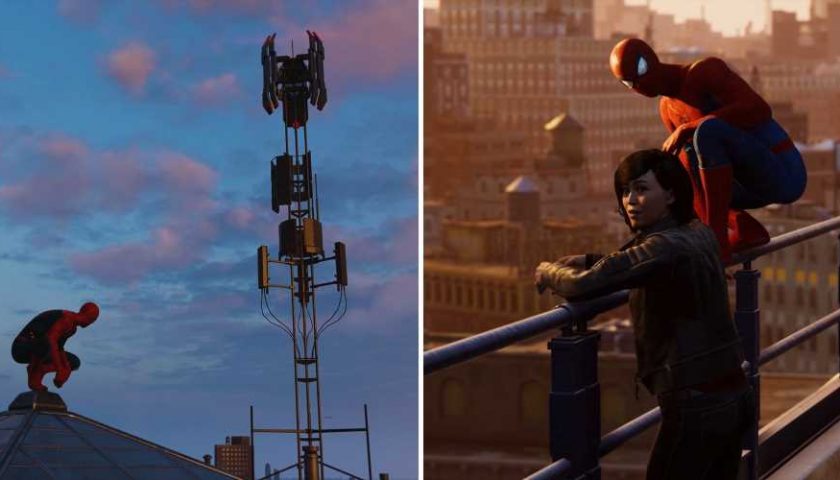 As you progress through the story campaign of Marvel's Spider-Man, you will unlock new areas and learn unique mechanics that will come in handy later in the game. One such mechanic you will get introduced to is the ability to fine-tune the Surveillance Towers on top of buildings in the Keeping The Peace story quest.

Yuri Watanabe wants you to meet her at the top of the Chinatown Police Department and help her to fix the recently installed surveillance towers. Tuning the surveillance towers will unlock the details of the nearby area, along with the side activities you can complete in the area. 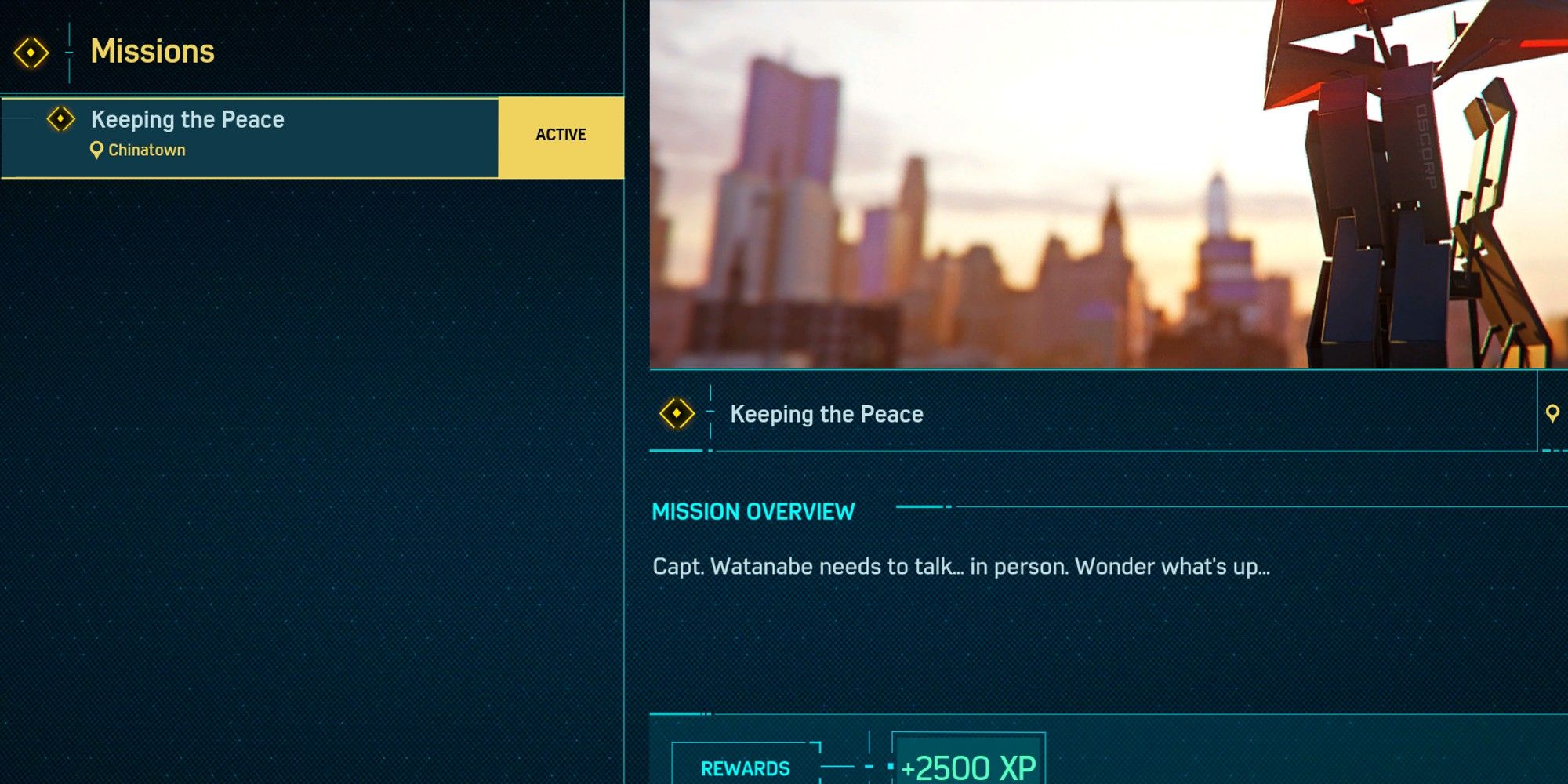 The Keeping The Peace mission is the fourth story mission of the game and starts right after you complete the My OTHER Other Job story quest. You will get a call from Yuri Watanabe to meet her. Head towards the marked location to get the mission started.

Tune The Frequency Of The Surveillance Tower 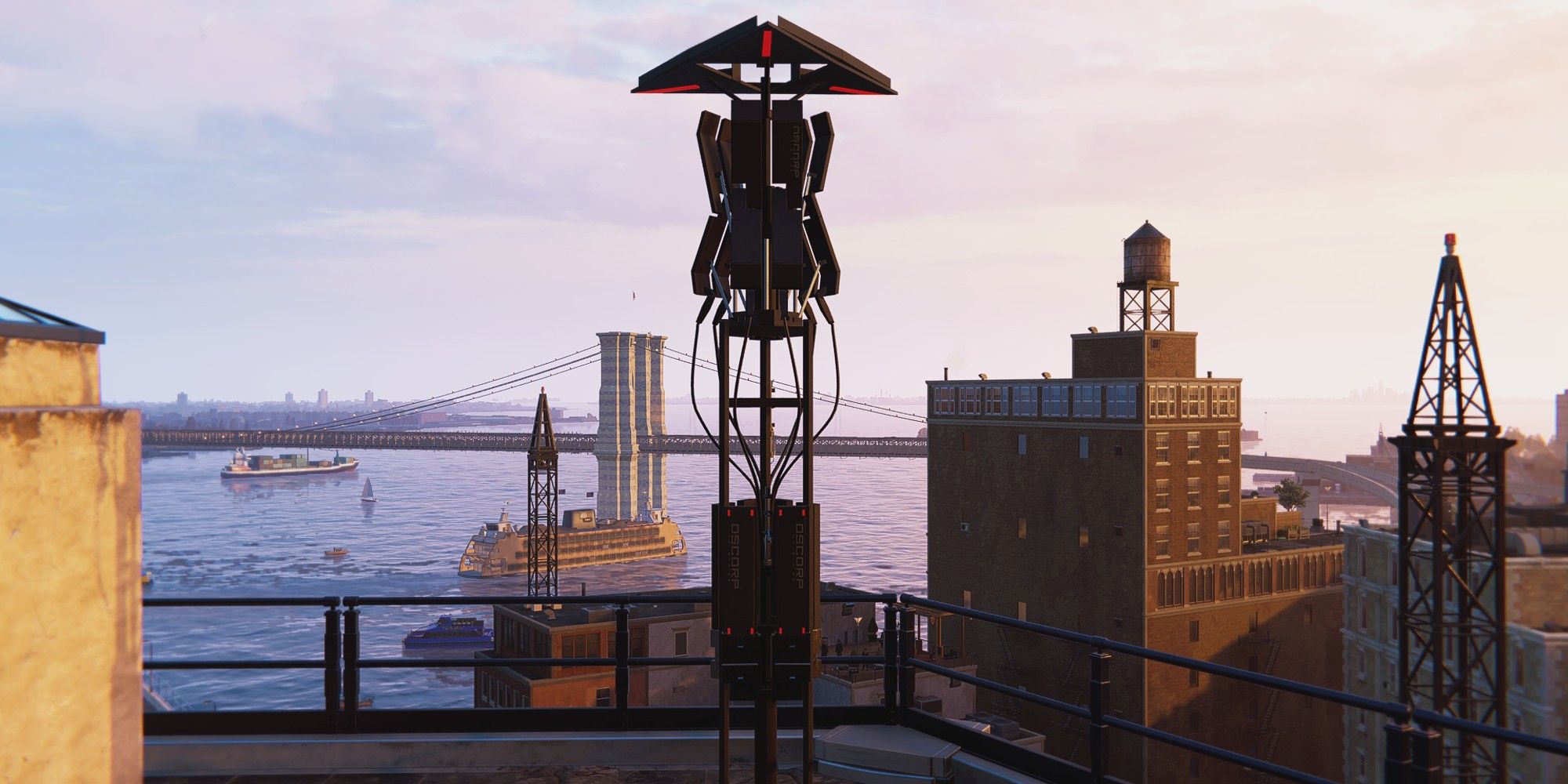 Once you interact with the tower, you will see a mini-game where you have to match the wavelengths with each other. Adjust the wavelength using the left and right knobs. 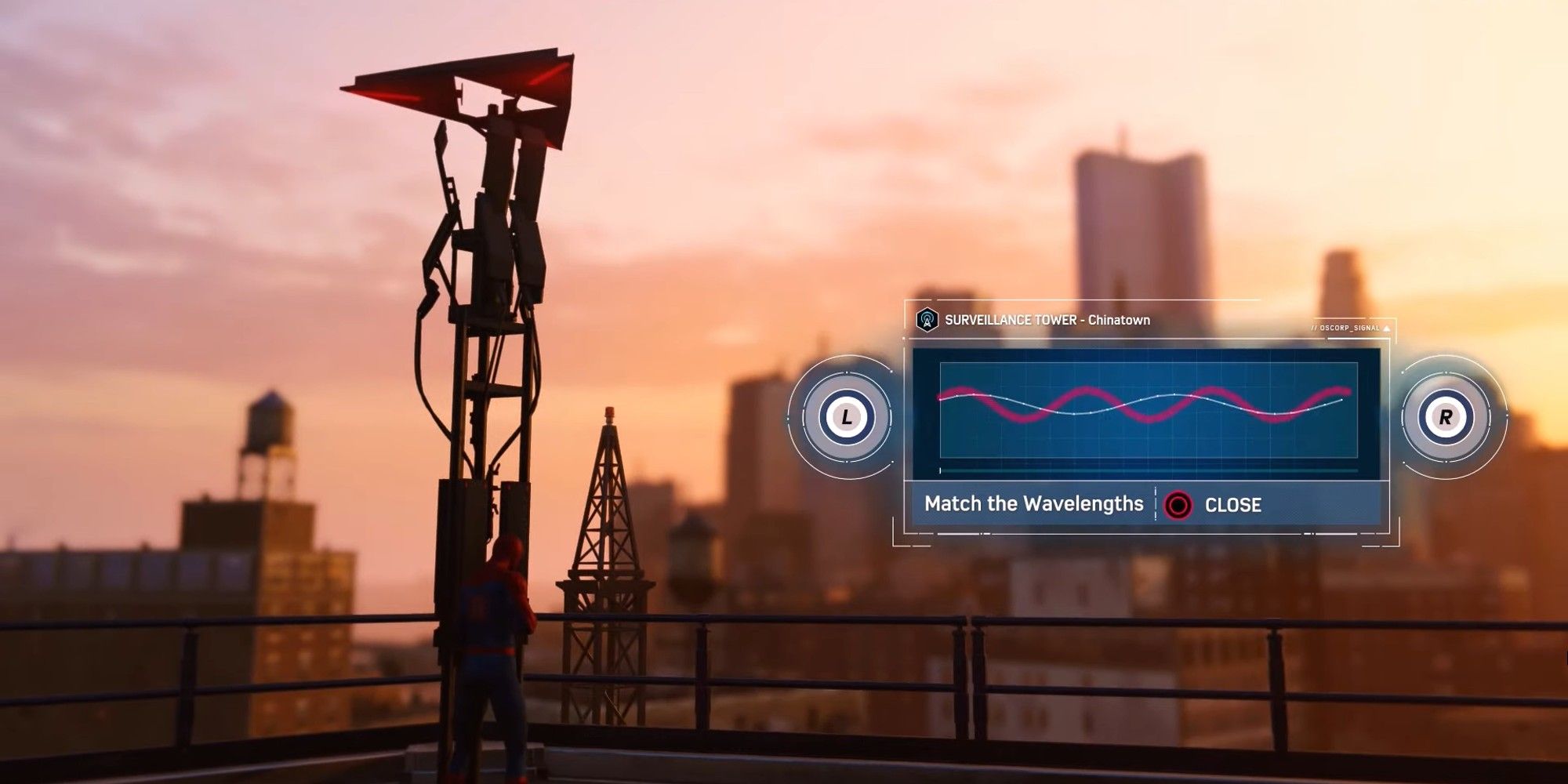 The surveillance tower will start working now. It will scan the nearby area for any criminal activities and mark a break-in attempt on the map, right next to the Chinatown Police Department in the alley. 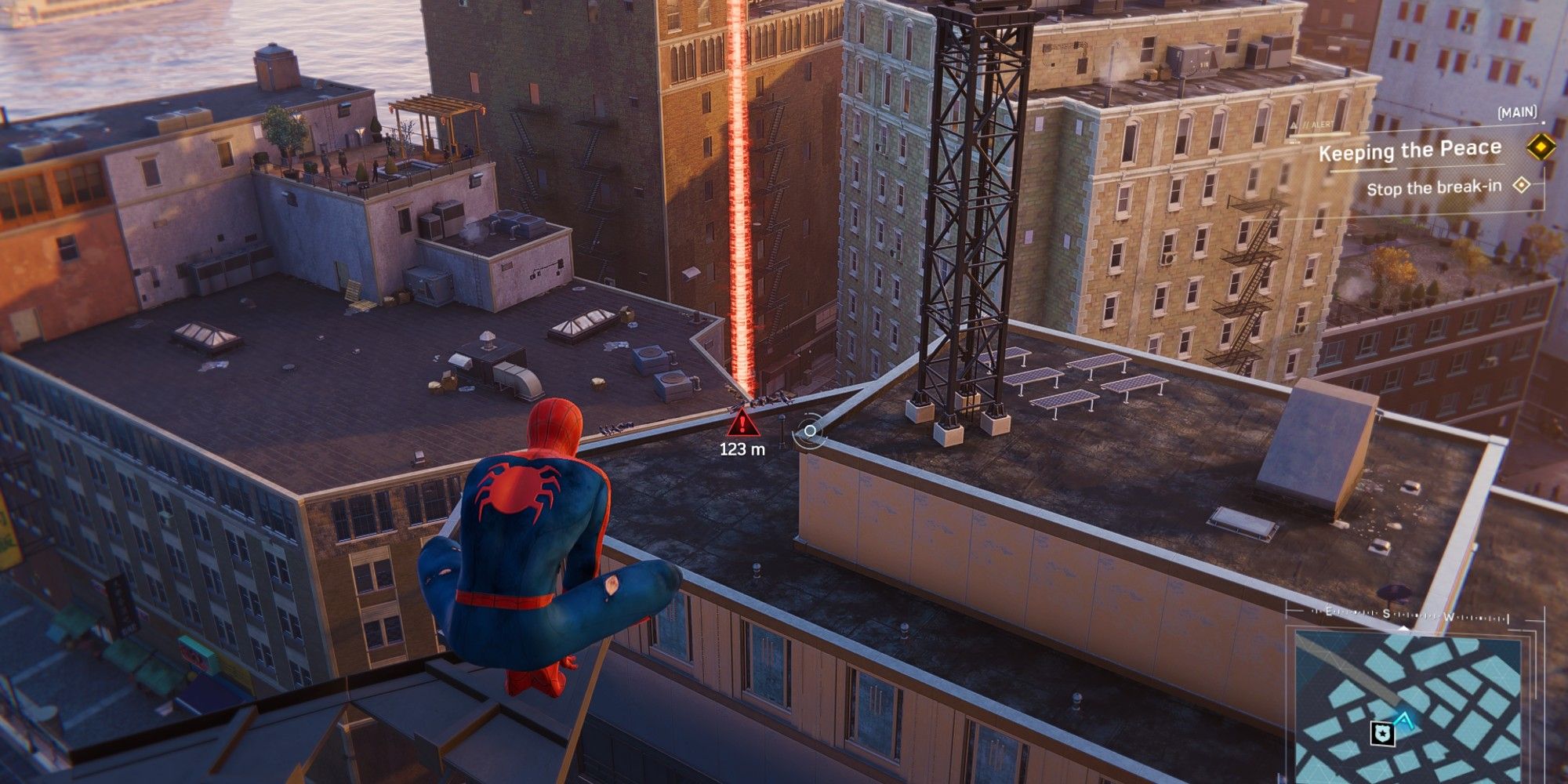 Head towards the red exclamation sign marker on the map to reach the next objective. You will find some thugs trying to break into the building from the back alley door.

Swing right into the action and start beating the thugs. There will be two thugs with melee weapons who will easily block your melee attacks with their weapons. 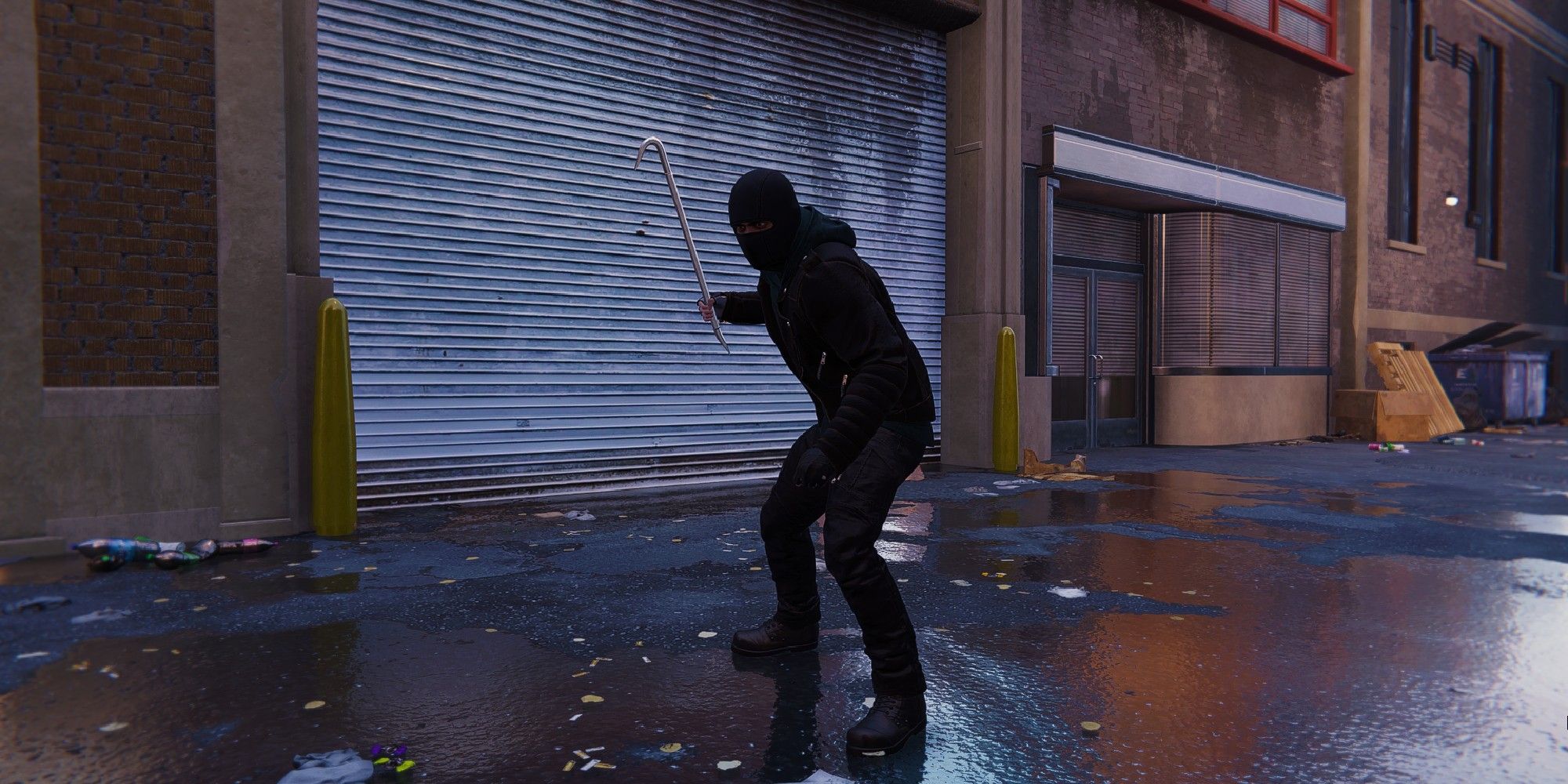 The only way to damage them is by performing the Air Launch attack by holding down the attack button. It will send them flying in the air, and you can easily land a combo attack on them. You can also throw nearby objects at them or shoot webs to make them immobile.

Use any of these attacks to defeat the thugs and stop the thugs from breaking into the building. 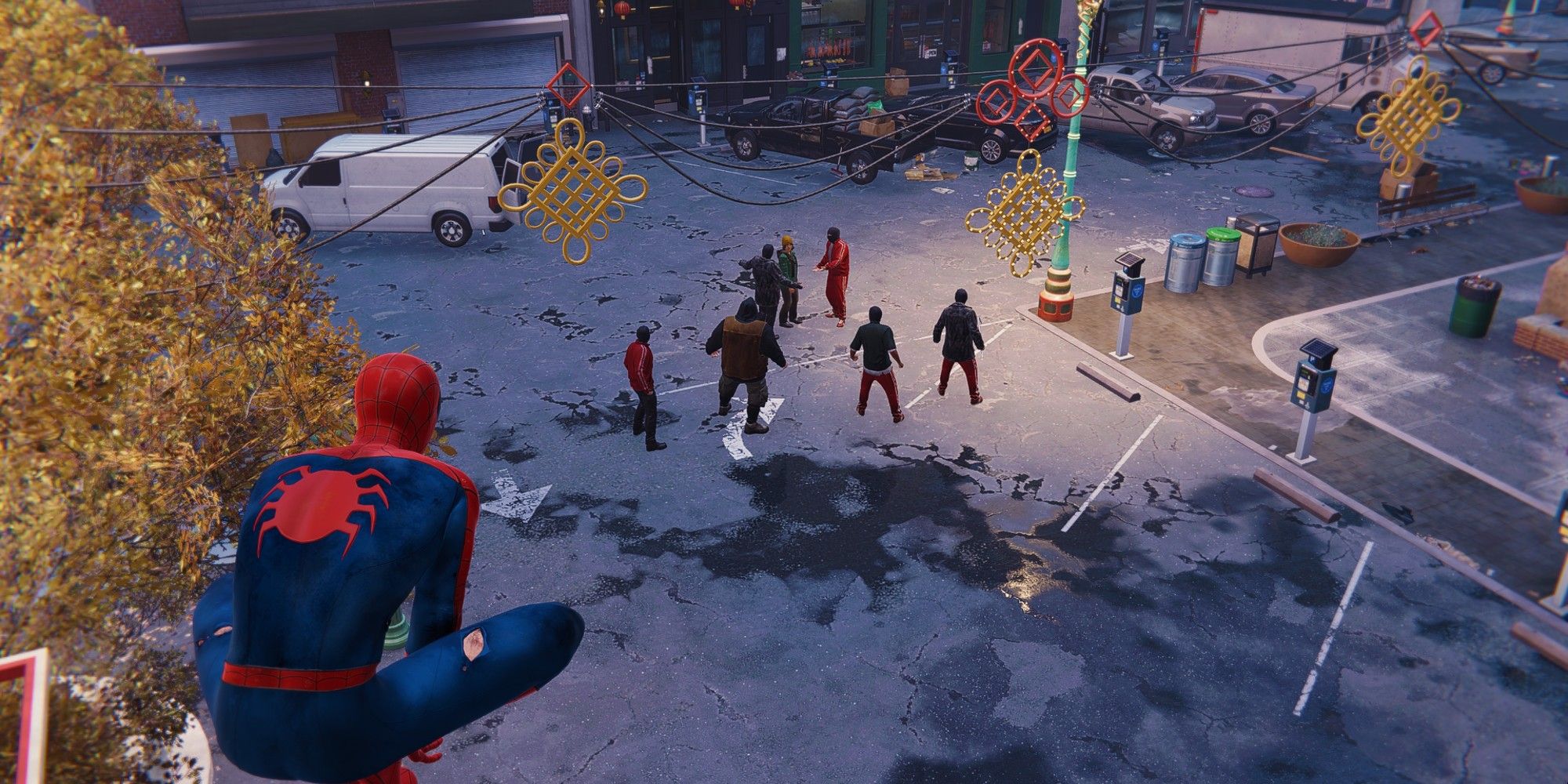 Right after you stop the first criminal activity, you will get a call from Yuri to save a victim from the thugs in the nearby area.

Head to the next marker to start the activity. You will see a big group of enemies surrounding an innocent woman. Among the group will be a new type of enemy called Brute. 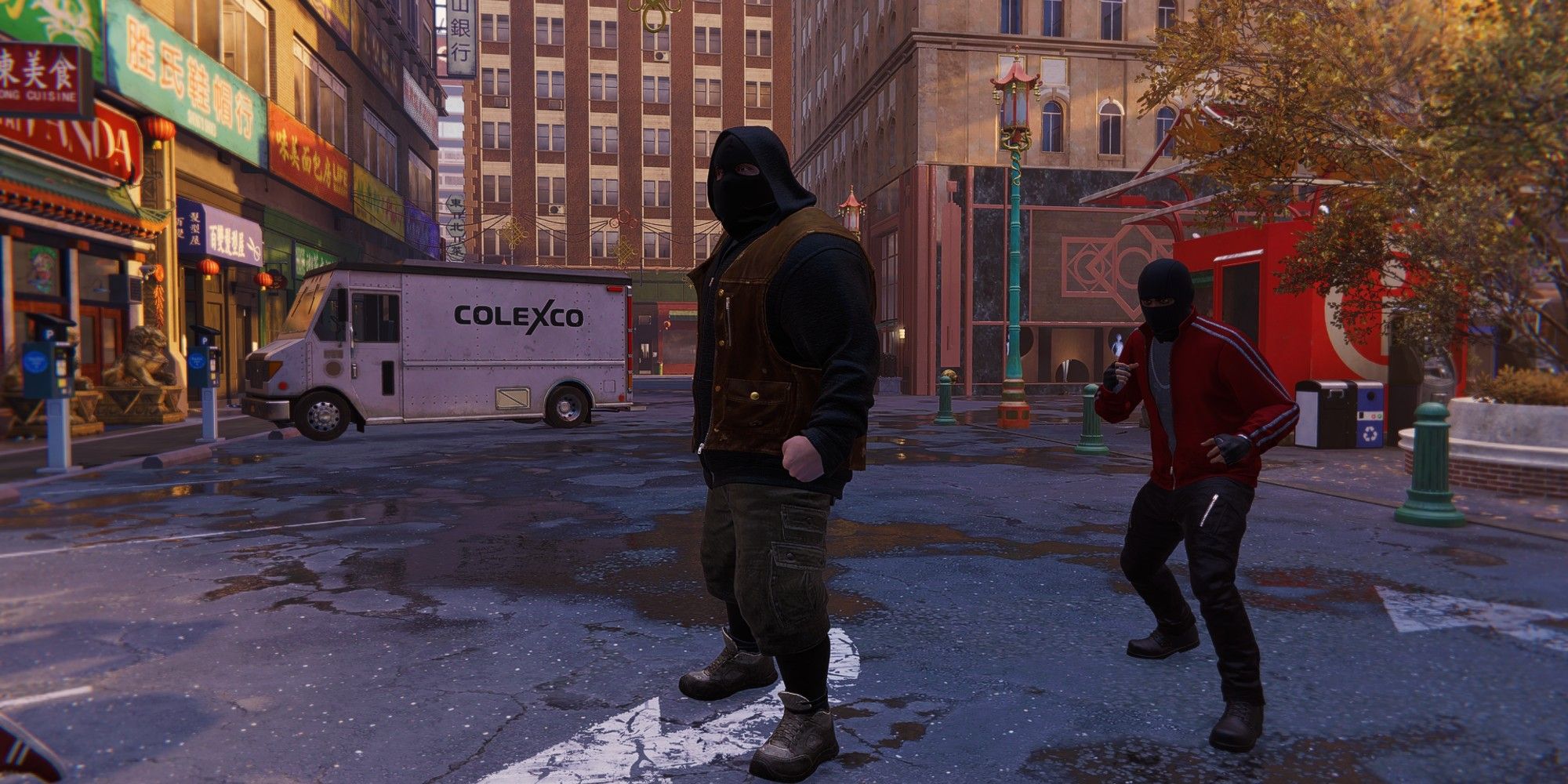 Brutes are massive in size and deal critical damage with each attack. They usually charge into their target and shove away anything that comes in their way. Also, you cannot damage them with your melee attacks. If you try to face them with only your hands, they will counter your attacks and throw you away in the distance.

The only way to damage Brutes is by throwing objects at them or shooting webs at them and making them unable to move. Shoot webs at them to make them stationary, and then zip into their direction. Land a two or three-hits combo and then jump away from them. It is the same fighting strategy used in the Wilson Fisk Boss Fight in The Main Event story mission.

During the fight, shift your focus towards the Brute first and use the above strategy. After taking out the Brute, defeat the other group of thugs to progress further. As you complete the fight, one of the thugs will place a gun on the civilian. You will have to stop the thug before the timer runs out. 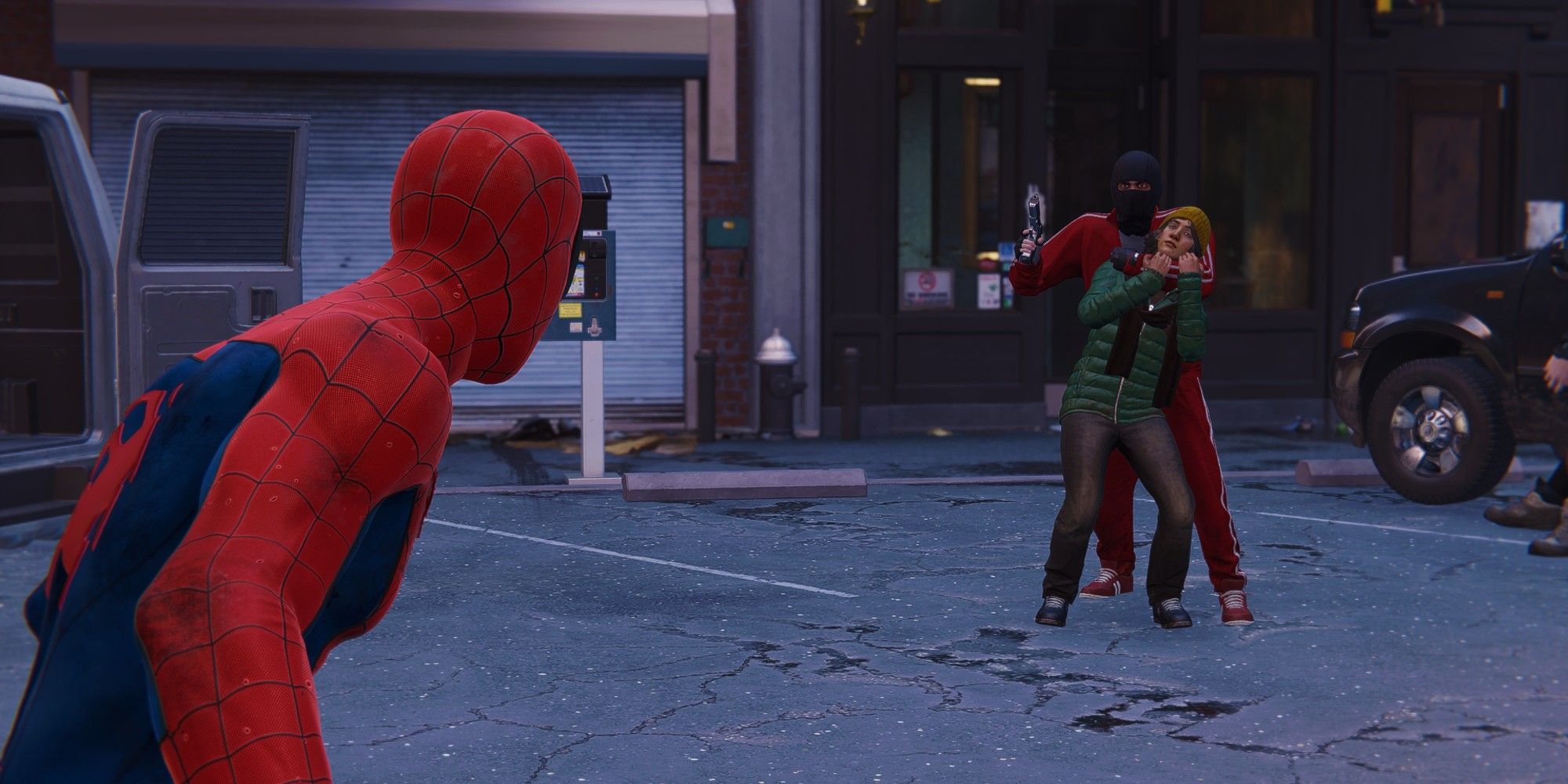 Aim at the circle over the thug's gun and press the button to shoot the web and disarm the thug. It will complete the activity and give you XP and a Crime Token. 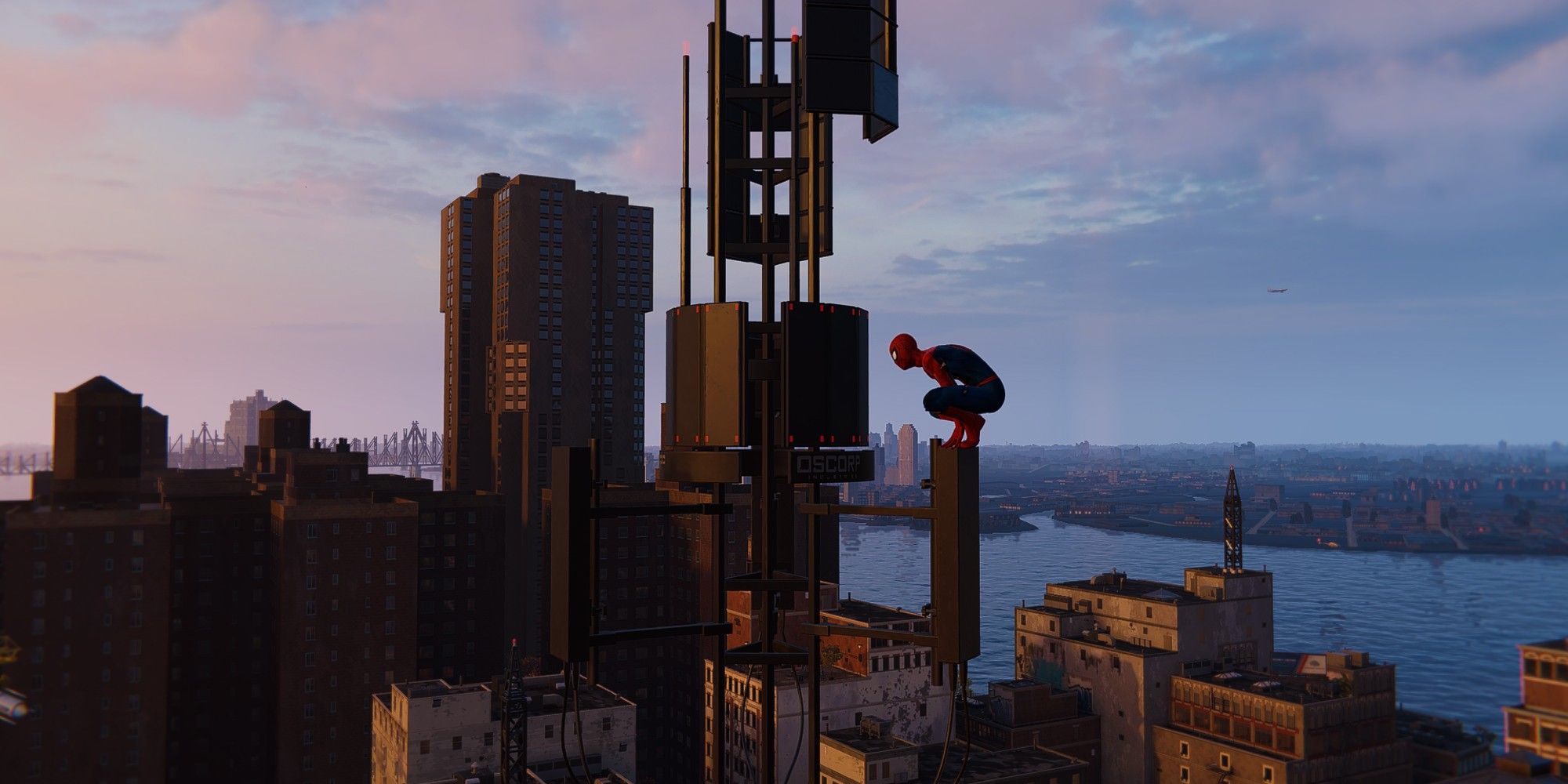 After saving the girl, head towards the second Surveillance Tower to start working on it. Interact with the tower and follow the same techniques as before of moving the knobs to match the wavelengths. When the tower starts functioning, it will scan the nearby area and mark a collectible on the map. 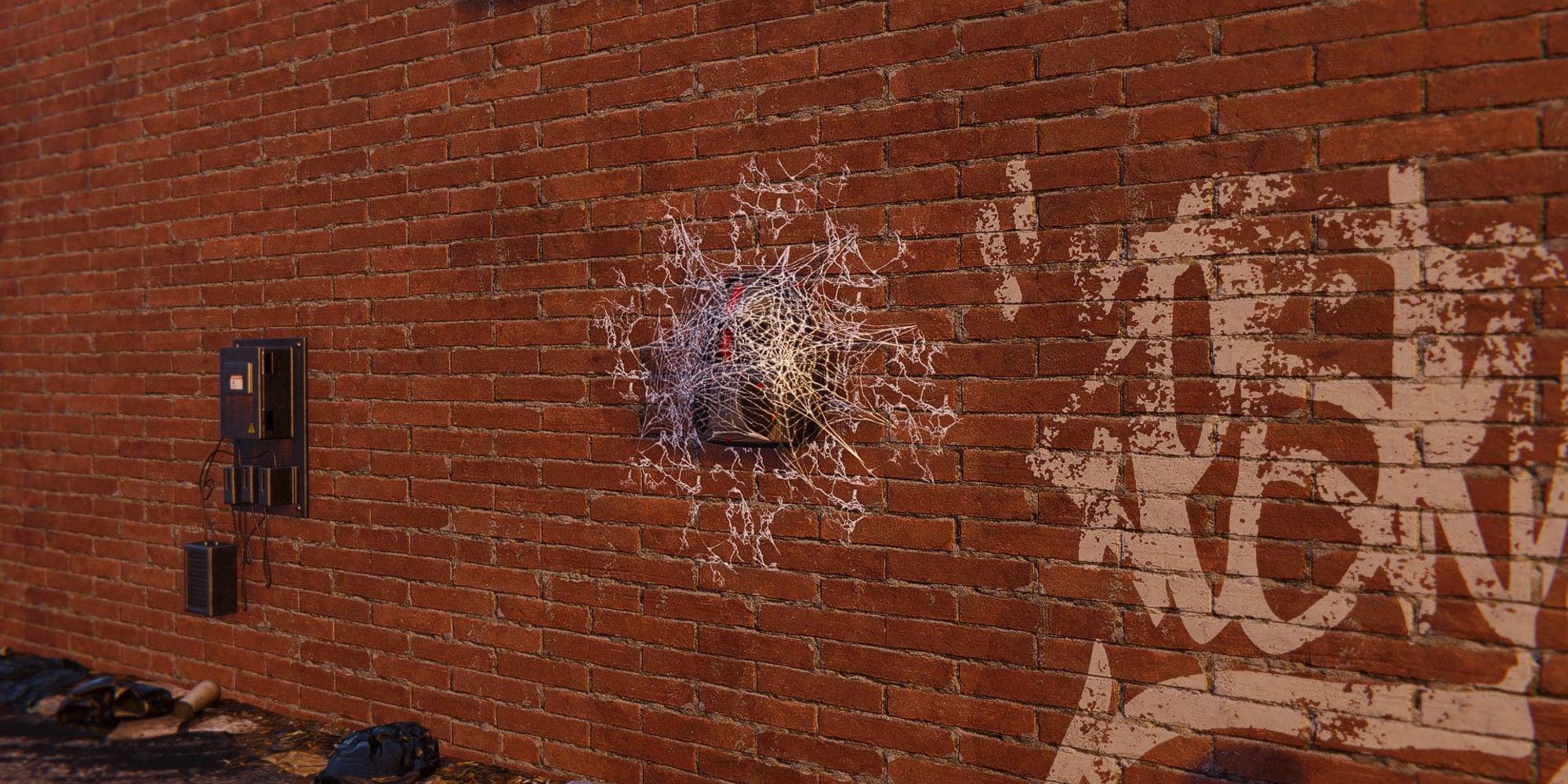 Head towards the marker to find the collectible. It will be one of Peter's backpacks, which he had hidden a while back. These are hidden all around the map and give you XP, some items, and Backpack Tokens. 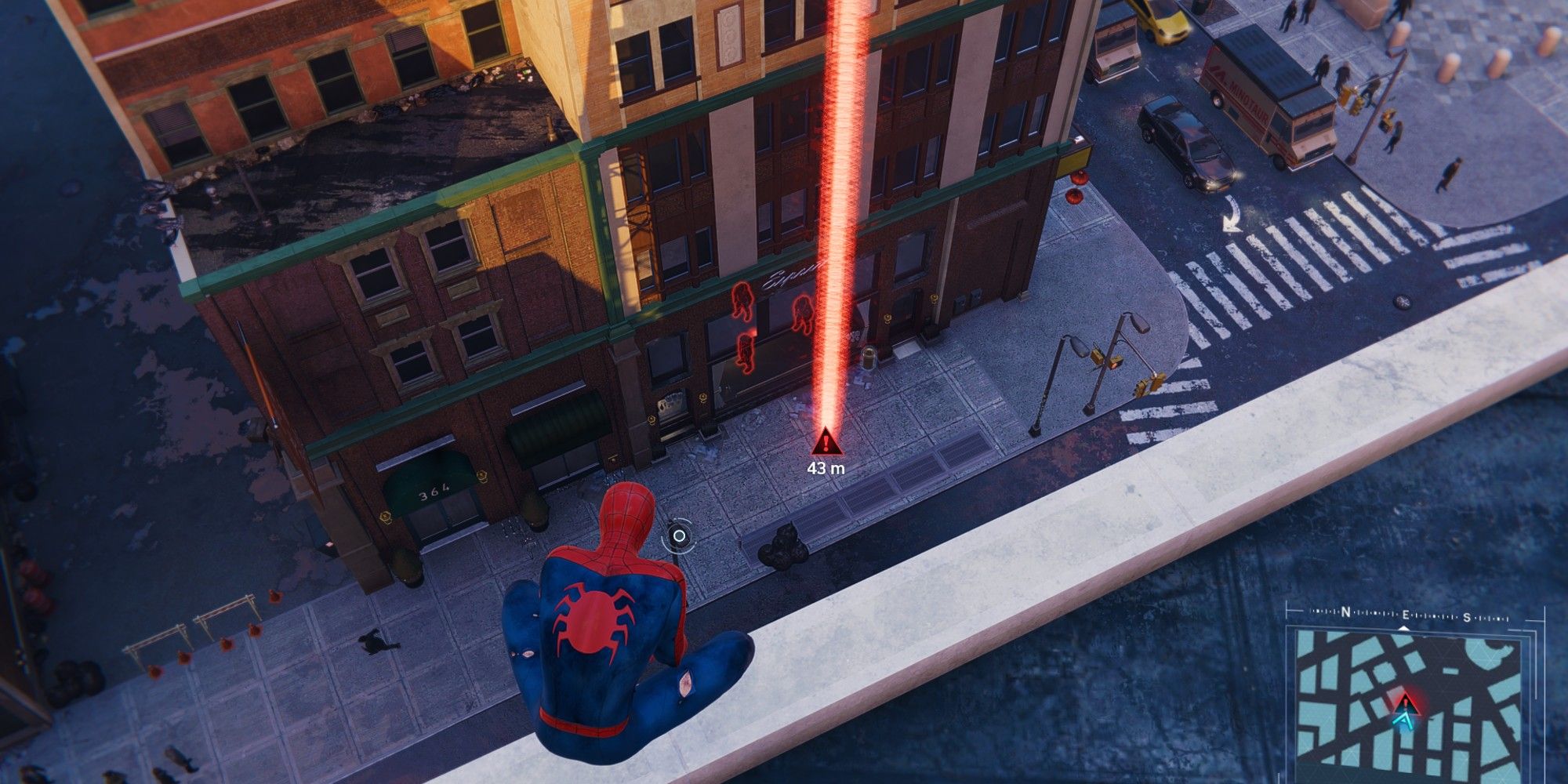 After collecting the backpack, you will see another crime activity marked on the map. Make your way towards the marker to find out about a robbery attempt at a jewelry store.

This time, you will face enemies equipped with firearms. Jump right into the action and start beating the enemies. 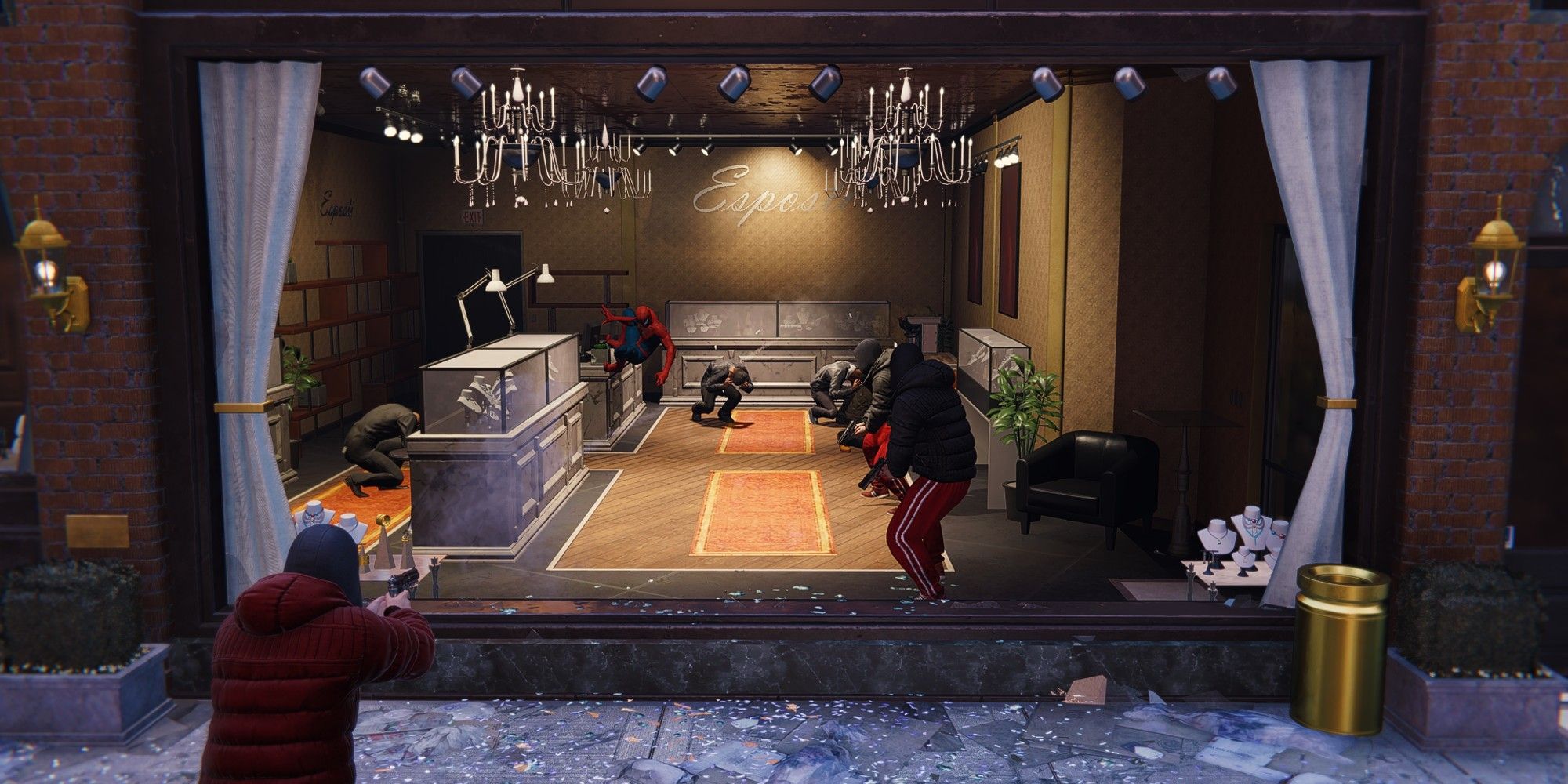 When you enter the store to fight the criminals, the aiming camera will shift to a fixed position. It will make it difficult to aim at the enemy you want to.

It's better to wait for the thugs to come outside in the street, so you can move around freely.

Web up the enemies to stop them from using their firearms and use the Air Launch attack to strike them into the air. Be quick with the movements around the enemies so that you don't get caught by the bullets. 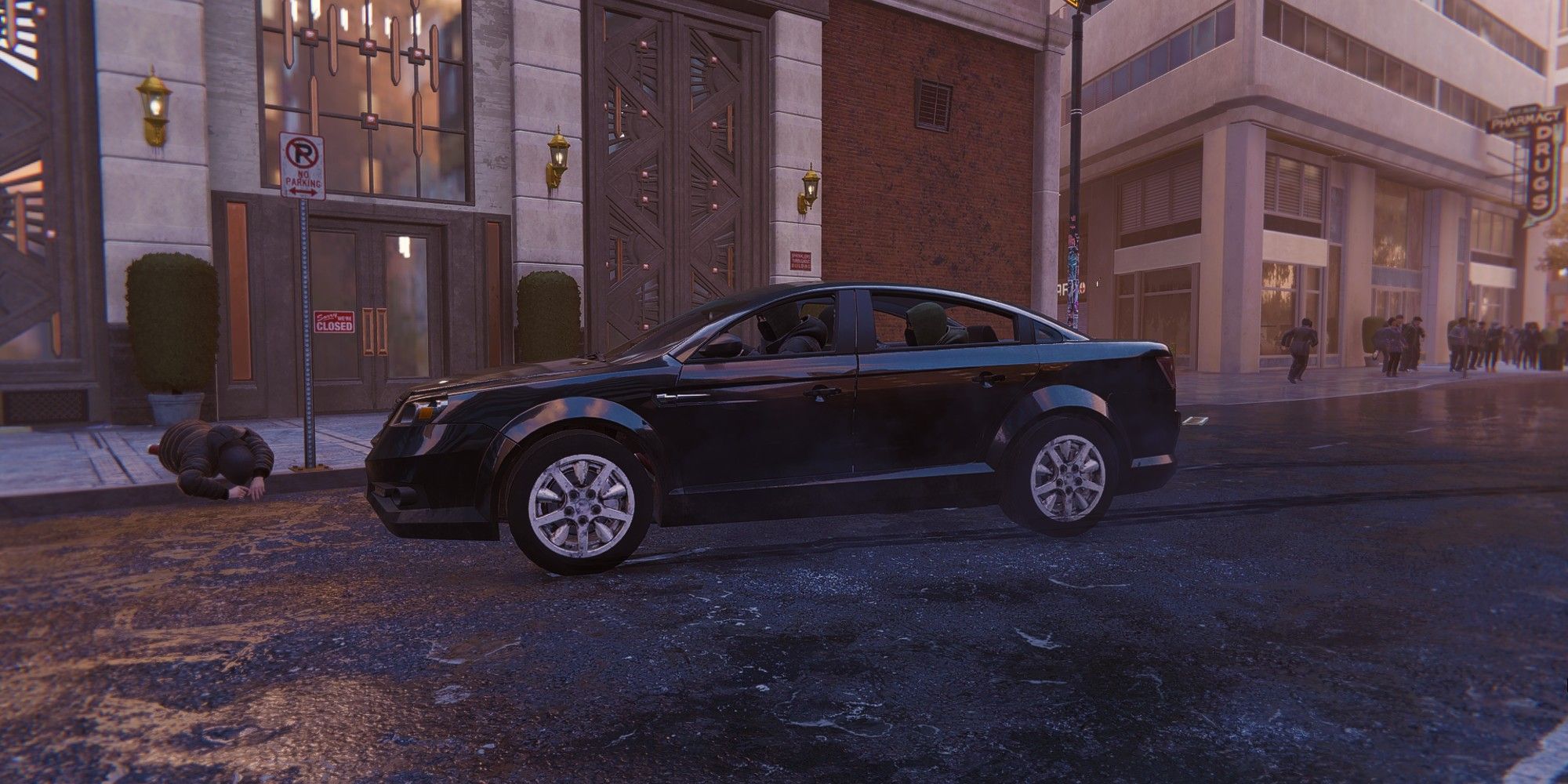 Reinforcement will arrive in a car when you beat up the first group of thugs. There will be four more thugs that will step out of the getaway vehicle; three of them will have a firearm on them.

Focus on the enemies with the guns, and take them out first. Then take out the last unarmed enemy. Defeating all the thugs and stopping the robbery from happening will give you a Crime Token and some XP. 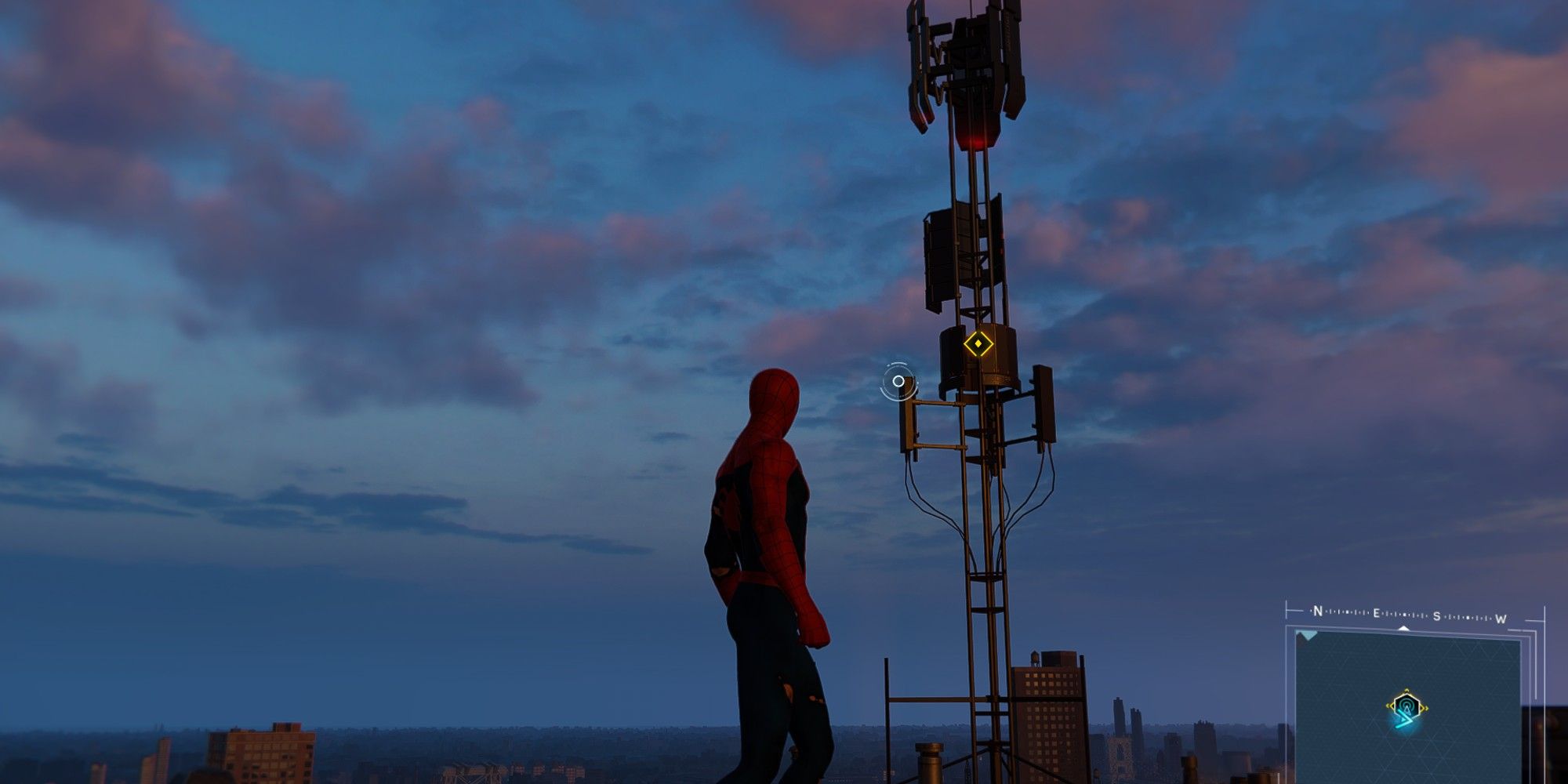 Next, head towards the third and final surveillance tower you need to tune for the mission to end. It will be on top of a building far away from the previous criminal activity.

Head to the tower and interact with it to start the fine-tuning mini game. Do the same as before and match the frequencies. Once you repair the third surveillance tower, the mission will end.

For completing the Keeping the Peace story mission, you will get 2,500 XP and the ability to repair Surveillance Towers all around New York.