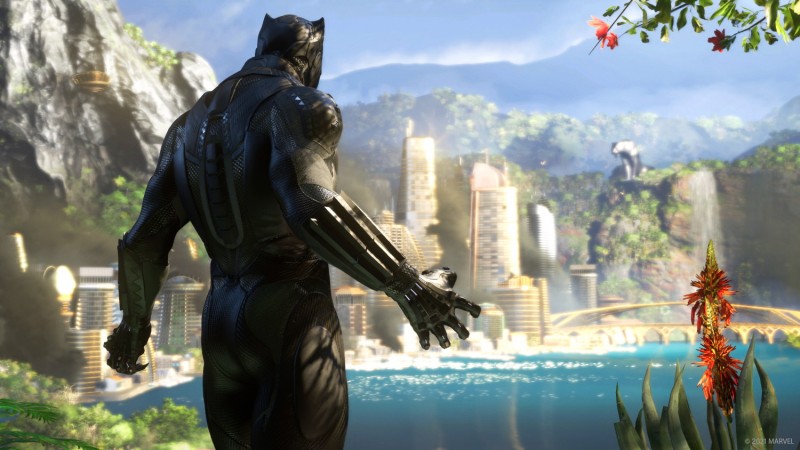 Following the successful launch of the War of Wakanda expansion, Crystal Dynamics will be adding Spider-Man and the first raid to Marvel’s Avengers before the year ends. The endgame is also expanding with a power-level cap increase from 150 to 175. This is all exciting news, but no specific dates were given for any of the additions – all of it falls under a general “fall/winter” timeframe.

Spider-Man will be a PlayStation-exclusive character, and although he’ll be added to the game soon, Crystal Dynamics didn’t want to say anything about him in a recent Zoom call. I did see an image of him swinging on a web line toward Klaw (the raid boss), but I couldn’t make out any of his suit details. Scot Amos, the head of studio at Crystal Dynamics, says that we’ll learn more about him closer to his launch and that we may “catch a glimpse of him here and there along the way.”

Marvel’s Avengers has been criticized for not having a wide variety of villains, and that appears to continue with the content that is coming soon. The raid brings Klaw back and will serve as a conclusion to his story arc from War for Wakanda. Crystal says this battle is completely new and is designed for both standard power levels of 150 to 160 and Elite power levels of 160 to 175. Amos says this raid will be the “most challenging content yet, meant to not only test the mastery of each Hero but also the well-built four-player Strike Teams.”

As you battle Klaw, you’ll encounter new enemies called Echoes, which are sound-based constructs that Klaw is creating. When this foe falls, expect significant gear and resource drops. Both of these elements are being reworked in the months ahead. Epic, Legendary, and Exotic gear can be upgraded beyond the Power Level of 100 to 175. The process of upgrading gear is changing, and Crystal says there will be plenty of more late-game gear to unlock. For resources, Crystal is striving to streamline its approach. “In this new system, each resource will have a single specific purpose to help improve clarity – like how Polychoron is used exclusively for upgrading major artifacts, and Upgrade Modules are reserved for upgrading gear,” Amos says. “Fragments will be the sole exception as they will remain a resource with multiple uses.”

As players hunt for new gear, they will also have the chance to earn cosmetics that were previously locked away in the marketplace. We don’t know if this includes any of the popular Marvel Cinematic Universe skins (of which more are on the way). What we do know is Disney+’s forthcoming Hawkeye show will at least be represented through a new nameplate.

Plenty of XP-boost opportunities are on the way in the weeks and months ahead, as is the chance to return to previous events like the Red Room Takeover, Tachyon Anomaly, Cosmic Threat, and Corrupted Vibranium. Again, no dates have been given for any of the new or returning content, which is a tad frustrating, but at least we have a clear picture of what we can expect between now and the year.