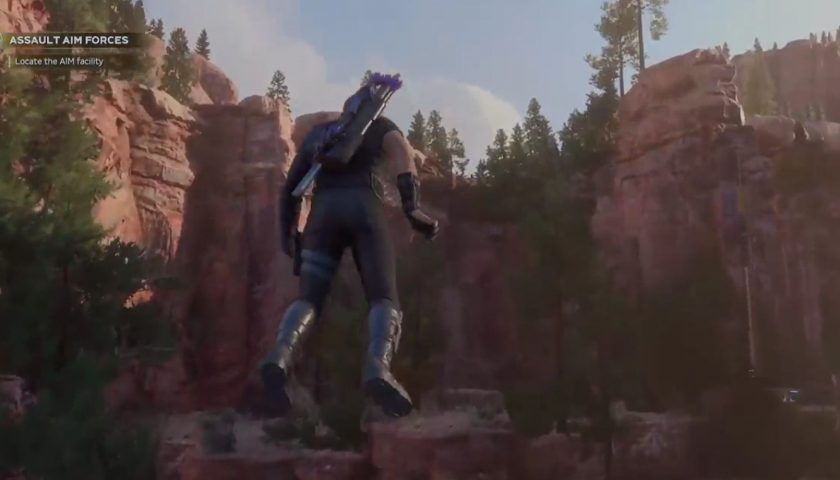 Marvel's Avengers isn't the most stable game in the world. Recently, it seems that Square Enix is shifting Crystal Dynamics' focus away from the ill-fated live service – especially now that it's selling the developer to Embracer Group. And to the frustrated players, this new bug is yet another example of the cracks beginning to show.

Characters in Marvel's Avengers are seemingly able to fly around the map like Iron Man, and no one knows why. The bug hasn't been acknowledged by the devs, but players have been able to pull it off for as long as two months now. It seems to mostly affect Black Panther and Hawkeye, and there's no known way to get rid of the glitch.

As you can see in the clip from Reddit user SpirosOntic, Hawkeye has clearly had enough of being one of the most useless Avengers. Instead, he has invested in some Stark tech – that is also invisible – and has taken to bring down his enemies. It could also be pretty bloody handy for Hawkeye mains, as he's able to reach new heights.

One user says they thought it was a cheat at first, and almost reported the Black Panther player they spotted flying around the map. However, it seems that many fans have experienced this glitch with the duo now, even if the devs don't seem to have a fix in the works.

Indeed, it does seem like this has been plaguing players for some time. Another post on the Marvel's Avengers Reddit from two months ago discussed the glitch, and another fan in the replies said it had been affecting Captain America too.

However, given the big changes at Crystal Dynamics recently, it's likely that the devs have a lot on their plate right now. We still don't know what Embracer Group intends to do with the game, if anything. We know that the company is seeking approval to publish the live service under its own name, but beyond that, we have no idea what it wants to do with it.