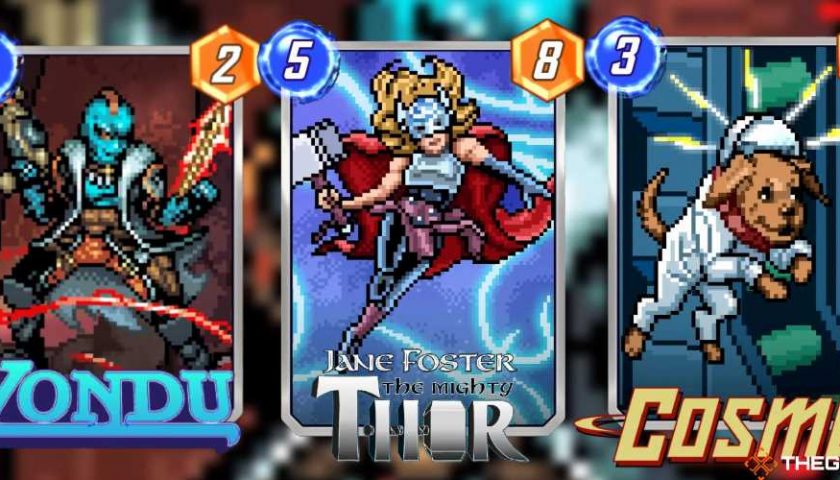 Unlocks for Marvel Snap range from cosmetics to new cards. When in a match, it's always nice to flash the nice variants you have as your opponent reacts with starry-eyed emojis. The game offers all kinds of art styles and fun twists on your favorite cards.

One of the common variants is a retro style that turns your favorite heroes and villains into pixelized versions for that old-school aesthetic. With so many retro cards in Marvel Snap, it makes it hard to choose the best. One can only have so much gold in their bank to spend on the retro variant that is available in the shop, so these are the ones you might want to keep an eye out for to put as a priority purchase. 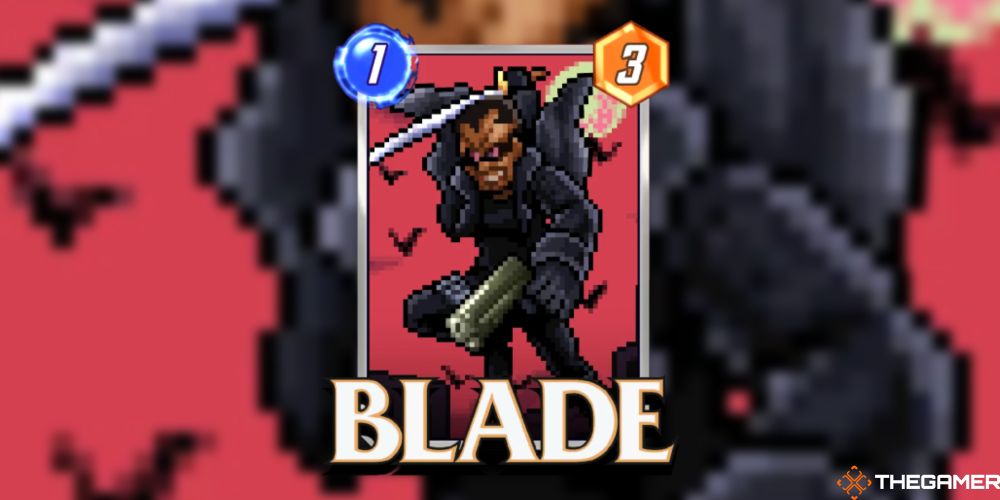 Blade is not only a useful card for certain decks, but he is also quite stylish. Across his variants, his retro edition highlights his power and aesthetic with the style of vintage video games.

The artwork shows the vampire slayer wielding his sword in one hand and a pistol in the other. As ready as he looks as he slashes one of the cards in your hand in half, it is the background that ties it together. A red sky with a yellow and pink moon gives him a fitting aura as he is followed by multiple friendly bats. 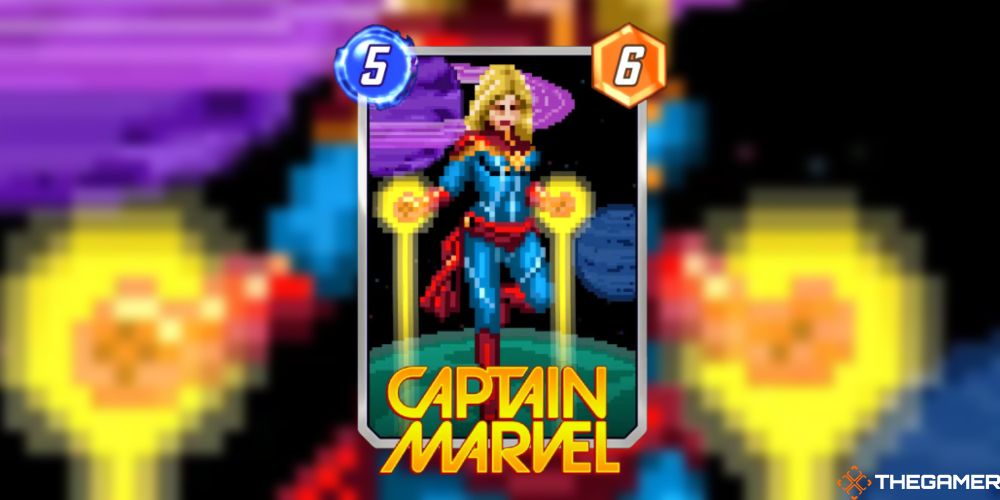 Captain Marvel always looks like she will save the day, but her retro variant shines a light on her power and iconic costume with this stylish pixel look. Her glowing fists with streaks of yellow light contrast against her art style, giving her an endearing look while intimidating those who stand against her.

Not every version of the hero lets her fly in space. Here, we see her floating in space with colorful planets in the background. Marvel Snap is already a vibrant game, and this is a prime example of how beautiful it can be in any art style. 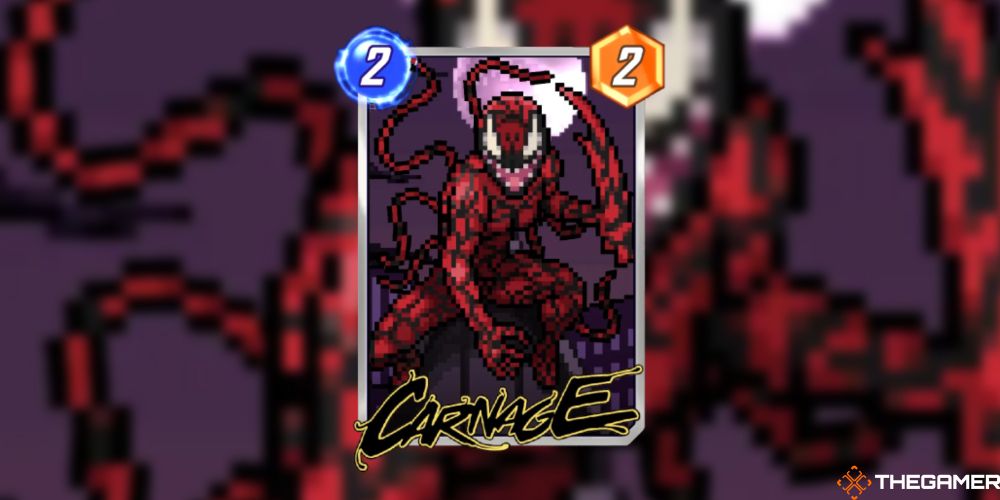 Carnage often looks mean and scary, but when you pixelize the symbiote, he looks quite cute. His hungry smile is wide, even though he probably has ill intentions. Regardless, you might as well let him feast on your other cards with a smile.

The color scheme of this variant works well. Carnage's red pops with the black complimenting the color of his skin, if that is what you can call it. The background city is hard to see, but the purple skin and pink moon give nice touches to work with the character's well-known look. 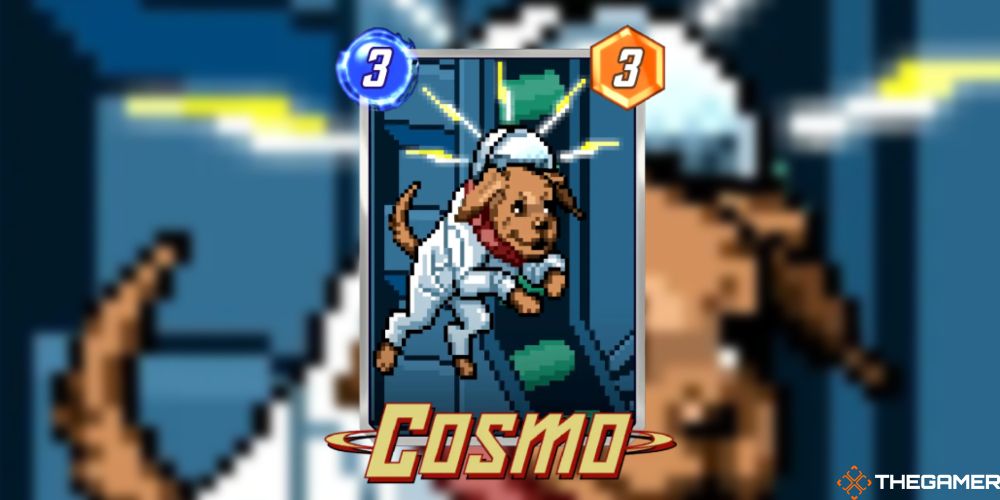 It's hard to go wrong with a dog in any game, particularly a telekinetic and telepathic space dog. Cosmo always looks cute with his fluffy fur, floppy ears, and cute space suit. He looks like quite the happy boy in his retro-styled costume.

Cosmo's other editions don't highlight his powers in noticeable ways. In this style, we see little lightning bolts above his head, indicating his powers. It is a fun way to show he is no ordinary dog looking for treats and belly rubs. 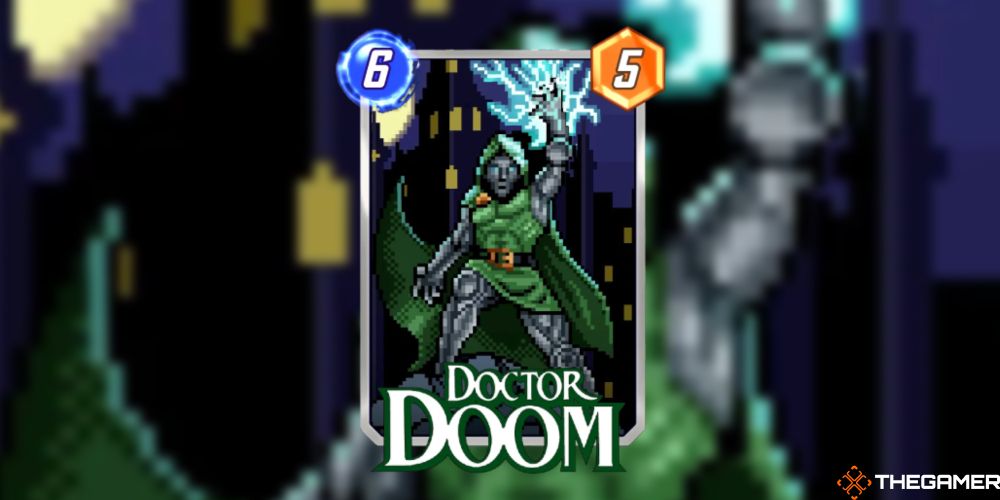 Doctor Doom lives up to his name by looking like a terrifying, dominant force you don't want to mess with on or off the board. While many of these variants look cute as they look like retro video game characters, the Marvel villain still maintains his powerful energy as he refuses to look adorable like Cosmo.

Much of his power in the image comes from the lightning shooting from one of his hands raised above his hand. The blue and white give a pop to the overall darker tones of the city behind him and his mostly gray body. Between the colors and details in his clothing, this is one of the most striking retro variant cards in Marvel Snap. 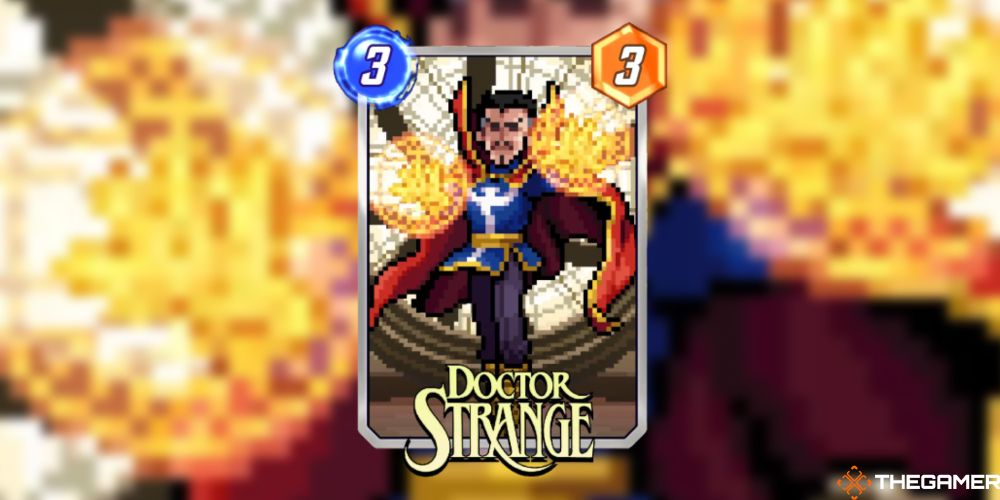 Some heroes and villains are showoffs as they flash their powers, and Doctor Strange is one of them. The retro variant sparks with his orange magic, which largely misses out on the intricate detail of the spells he conjures due to the pixel art.

Everything comes together to make this twist on the doctor-turned-sorcerer-supreme. We see his magic in full effect, a wide view of his costume as he floats, and the dynamic window from the Sanctum Sanctorum. The whole picture captures the character and his home, which a few cards can accomplish. 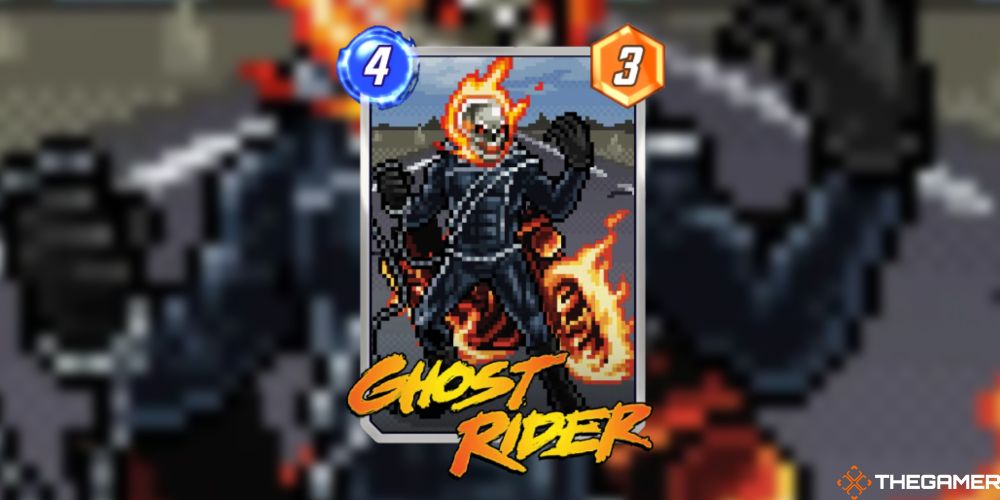 Explaining some Marvel characters to people might get tricky, but Ghost Rider is simple. He is a man with a flaming skull for a head and rides a motorcycle. Still, there are so many creative artists who can do with him across different styles, particularly when it comes to pixel art.

Ghost Rider does not need a fancy background as he stands in the middle of an empty road with his bike. He stands menacingly with his black leather costume, flaming head, and motorcycle. The fire consumes the bike as it glows with lighter and darker colors to make it look more dynamic. 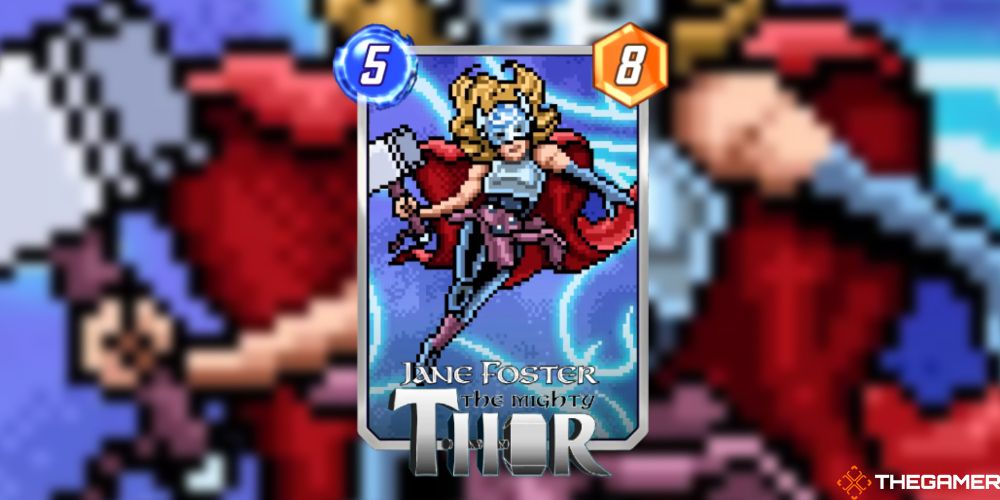 Jane Foster outshines her counterpart with her armor and electric backdrop. Even when she is simplified with a retro card variant in Marvel Snap, the character glows with her thunderous power and striking armor.

Flying in the air gives a reason to provide flow to Jane. Her cape is waving, her hair is wavy, and her pose shows off the entirety of her costume with Mjölnir in hand. The light gray of her armor and the blue pants work well with the background of blue lightning while not getting lost, thanks to the strong black lines that outline her. 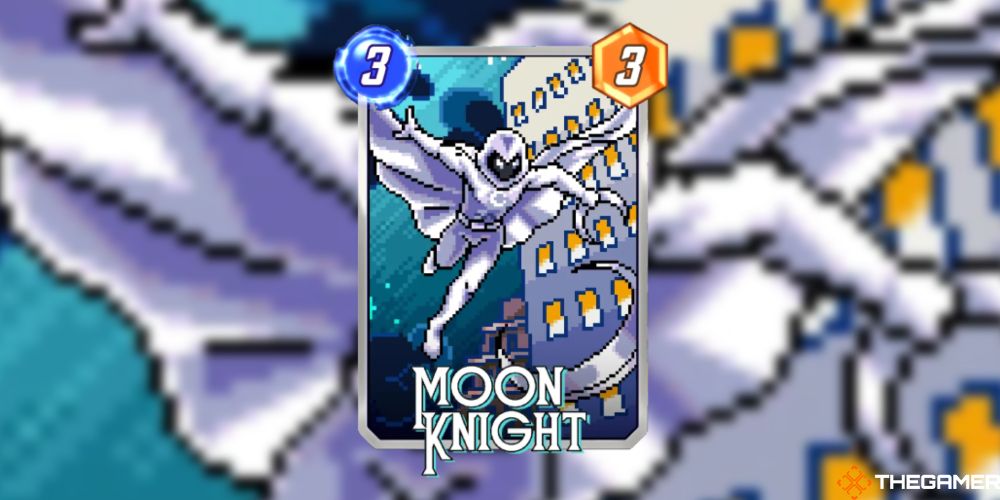 Being primarily one color or shade can be difficult to highlight in detail, especially with a pixelated retro style for someone like Moon Knight. The use of shadows assists in showing his flowing cape as he dives with his moon-shaped weapons. The use of a whiter white creates a spotlight in the middle of a chest for his half-moon icon.

The white lays out the palette for the background to work with as we see a white building and a blue night sky. The strokes of lighter and darker blues of the sky with its dark clouds fit well for the nightly hero. 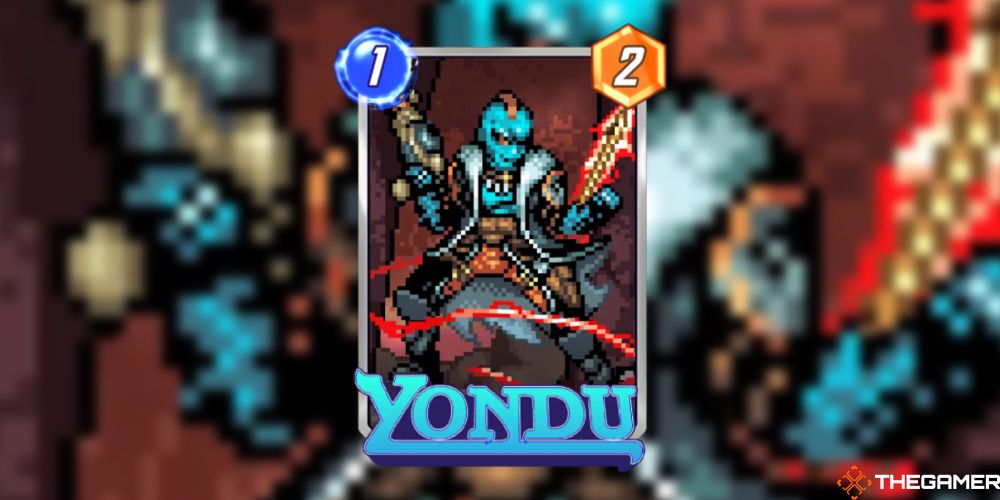 Yondu has some of the most dynamic color schemes across every variant in Marvel Snap, and his retro style is no different. The artist(s) delivered a card packed with detail across his costume and the action of his flying arrow going past him, leaving a red streak as it soars to a potential victim.

The little details in his costume and all the colors give a lot to look at when admiring this rendition of Yondu. The different colors work together across his light blue skin to the darker tones of his clothing and blurred background.