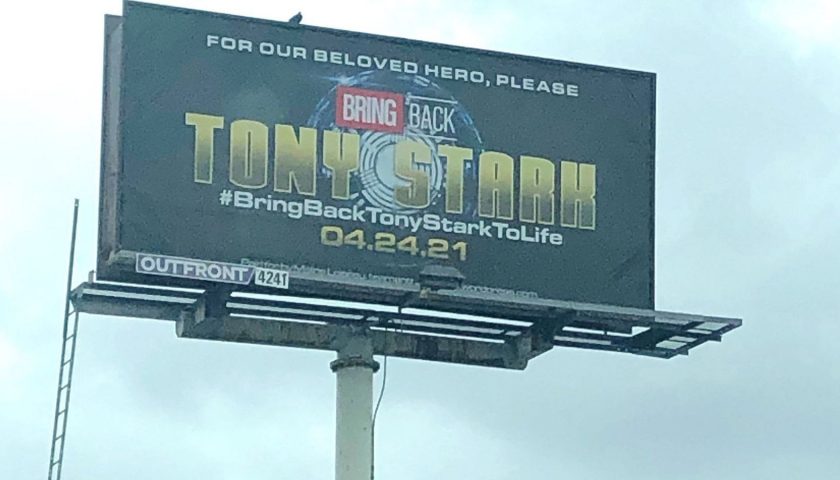 The Infinity Saga may have concluded its epic, 11-year run, but the love fans have for The Avengers will never die. Even though Phase Four offers an overwhelming amount of new characters and features to fall in love with, Marvel fans refuse to see the future of the MCU without Robert Downey Jr.’s Tony Stark, and the community has banded together to give Marvel a huge sign of their devotion.

Iron Man himself recently posted a tweet to celebrate the second anniversary of Avengers: Endgame – the conclusive chapter of the Infinity Saga that saw Stark’s demise – and accompanied his “#LoveYouAll3000” hashtag with a behind-the-scenes look at an alternate Soul World scene.

RDJ is visibly passionate about his time in the MCU and clearly grateful to the fans who supported his Iron Man journey, but the actor has been radio silent regarding the character’s possible return. One corner of the universe that refuses to remain quiet, however, is the loyal band of Tony Stark fans who wanted to make their hope for the character’s return known.

The Lights, Camera, Pod podcast posted an image of a Tony Stark billboard that had apparently been erected by fans in Los Angeles, pleading for the character to be returned to his rightful, armored suit. The billboard read “For our beloved hero, please Bring Back Tony Stark”, underlined with its corresponding hashtag.

If there’s one way to get Marvel’s attention, this is it, and it’s a pretty impressive feat orchestrated by the fans. RDJ nor Marvel have responded to the billboard, but there could be a future for Stark in the MCU without the need of constant flashbacks.

Thanks to the release of a Shang-Chi Marvel Legends Series action figure, we had a first, surprising look at what Stark would look like as an A.I.. The back of the box clearly featured an A.I. reincarnation of the character, and now a figure of the computerized genius has been released too. Toy companies have a bad rap for spoiling plot details ahead of time, but Stark’s figure has recently appeared in stores and offers a plausible explanation on how the character could return to future narratives.