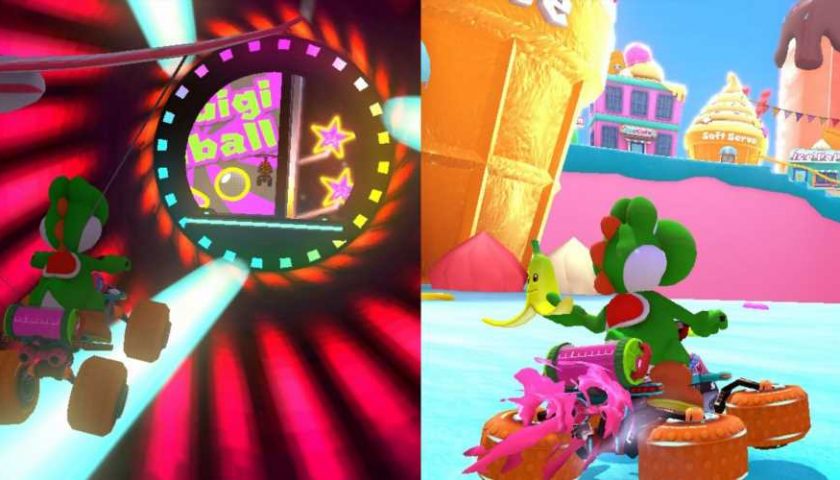 Mario Kart 8 Deluxe has proven to be the gift that keeps on giving, with its Booster Course Pass. Wave 2 of the DLC adds two new cups, the Turnip Cup and the Propeller Cup. These two new cups add a series of tracks from Mario Kart Tour, in addition to returning favourites like Mushroom Gorge and Waluigi Pinball.

Every new track adds opportunities to skip curves, find boosts, and shave seconds off of your speedruns. Whether you're racing for a first place finish or competing for time on the leaderboards, here are all the shortcuts in every Wave 2 track and where to find them. 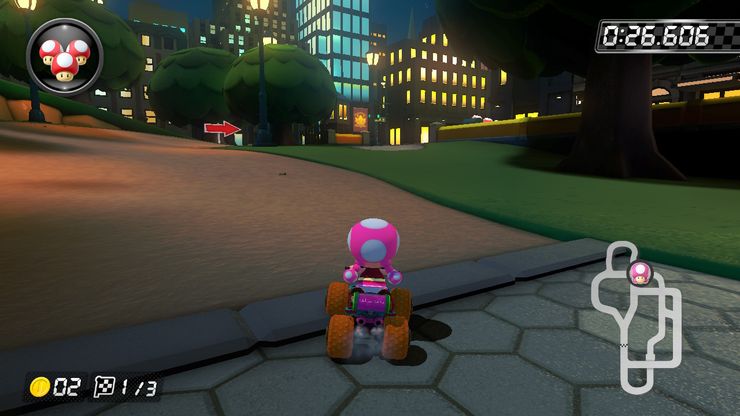 New York Minute is another track based on a real life city. Right at the beginning of the track, you'll race through a small tunnel that returns on subsequent laps. Once you exit the tunnel, look immediately to your right, and you should see a little ramp through the grass. If you look at the image above, this ramp is directly ahead of the player-character. Use a boost mushroom skip the next turn and reach the other side of the track. 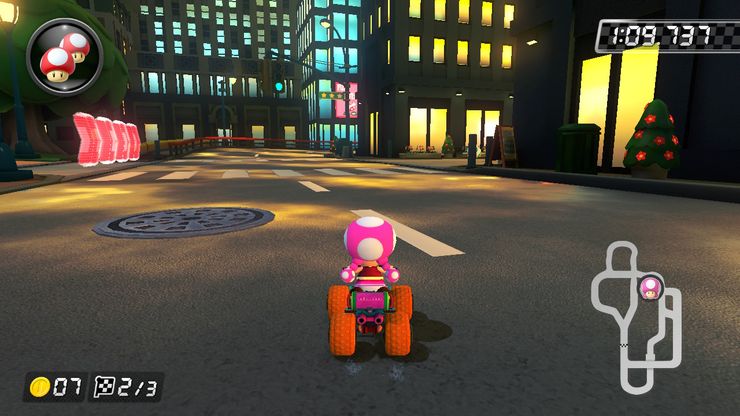 This next skip is a little more visible than some other Wave 2 tracks. Once you get to this road, where the red arrows direct you forward, turn straight to the right with a drift. You'll be able to see this turn when you spot a Toad bouncing around behind a lampost. You can skim a few seconds off of a lap by boosting through this back road. 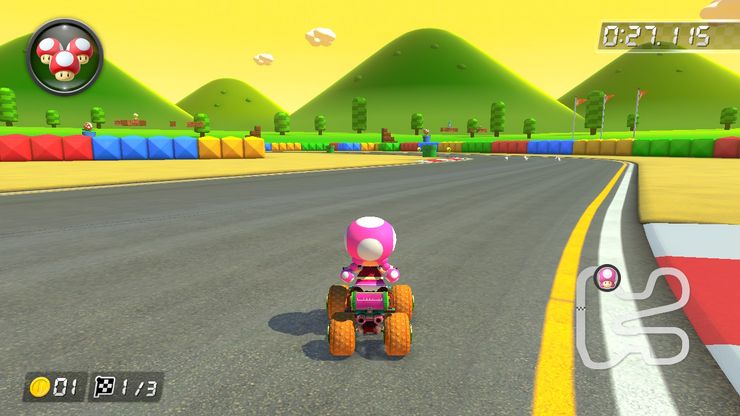 Mario Circuit 3 is a relatively straightforward track with plenty of opportunities for big drifts. There aren't many traditional shortcuts, but there are plenty of ways to skip certain corners by using a mushroom through the terrain. Whenever you encounter a big turning point, try to combine a drift and a mushroom to cut through any large areas of sand. 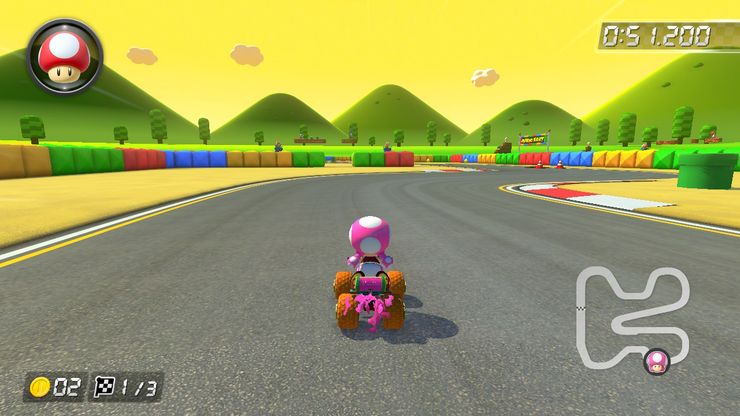 The only true shortcut on Mario Circuit 3 comes at the final stretch. This track is bordered by colourful blocks that follow you left and right. However, there is one section of it that has a gap and can be exploited. In the image above there's a gap in the blocks ahead. You can boost yourself straight through with a mushroom, completely skipping the need to turn and drift all the way around the curve.

Right At The Start 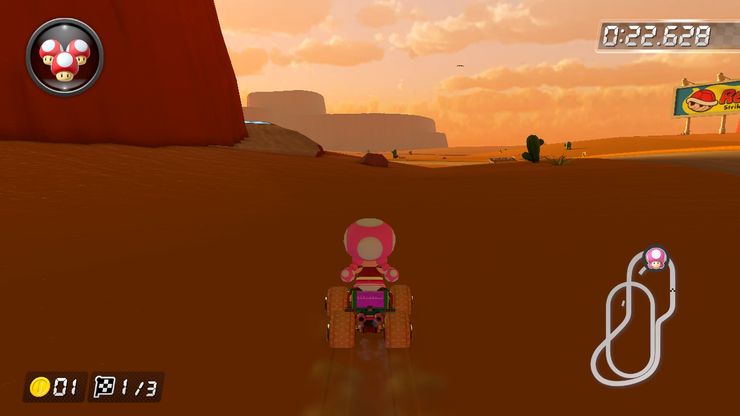 The first shortcut on Kalimari Desert comes almost immediately. You won't be able to see this slope while you're on the track since it's concealed behind the terrain. But if you can boost off of the track, to the left, you'll be able to spot this ramp on the side of the cliff. There'll be a blue ramp at the end that will open your glider. 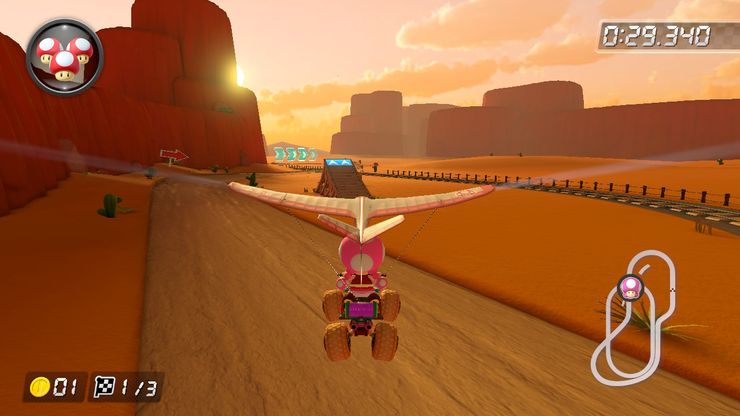 From the last shortcut, you can glide straight over the track until you reach the next glider ramp. Make sure you tap the drift button to boost over a ramp. 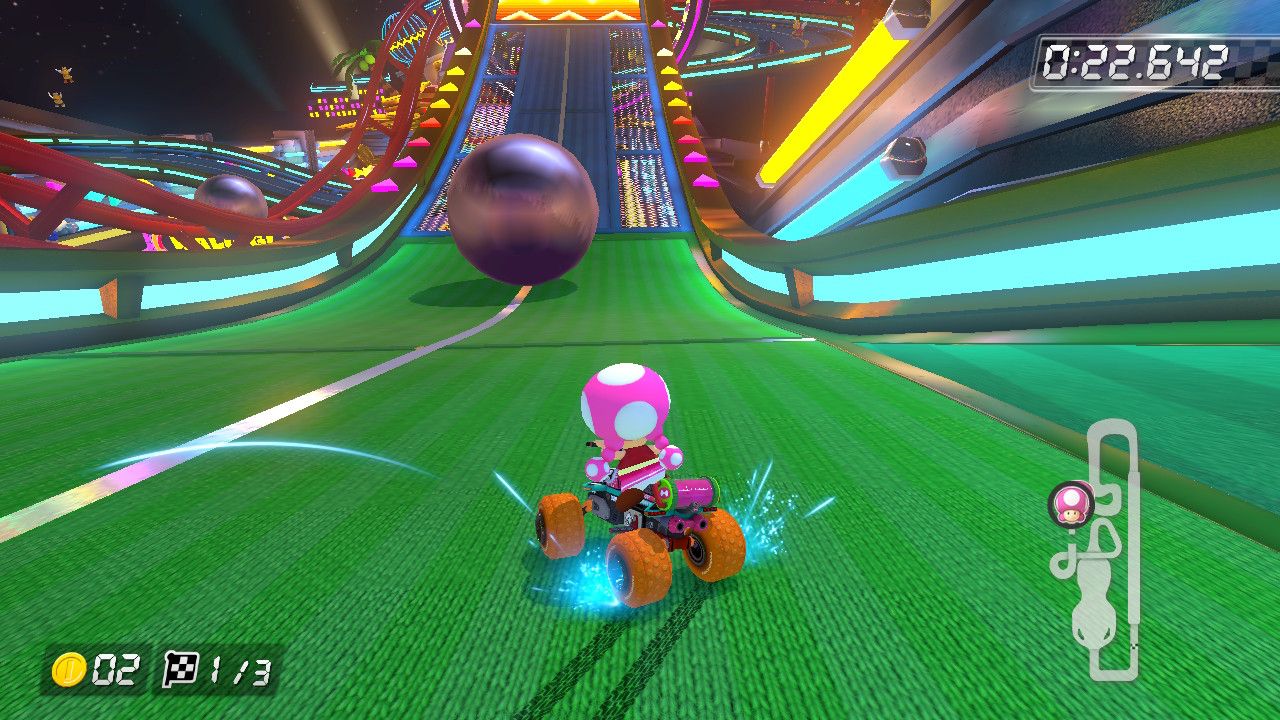 The only semi-secret here can be caught on 150CC or 200CC. If you drive fast enough at the start of the race – hitting all the boosts, drifting successfully, etc. – then you'll be able to outrun one of the pinballs on the track. This means when you reach the inside of the pinball machine, you'll only need to worry about one massive ball hurling your way, making the first lap much easier. After the first lap, there will always be two pinballs in this section. 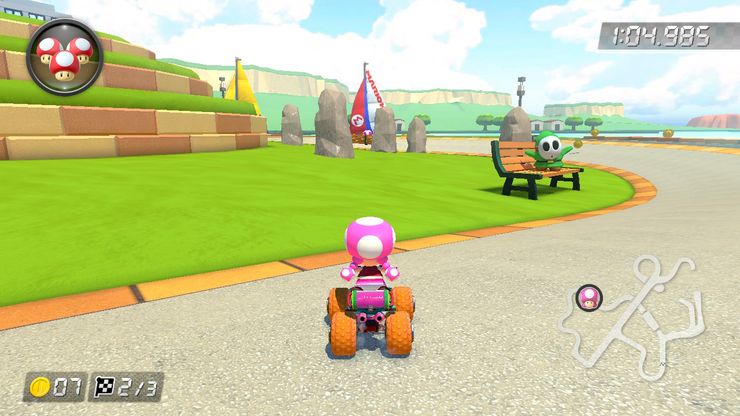 Half-way through Sydney Sprint you'll reach the coast, at which point you'll be able to see a standing stone formation on the left. If you time a boost correctly you can speed through the stones and skip the majority of this turn.

Between The Fountain And The Building 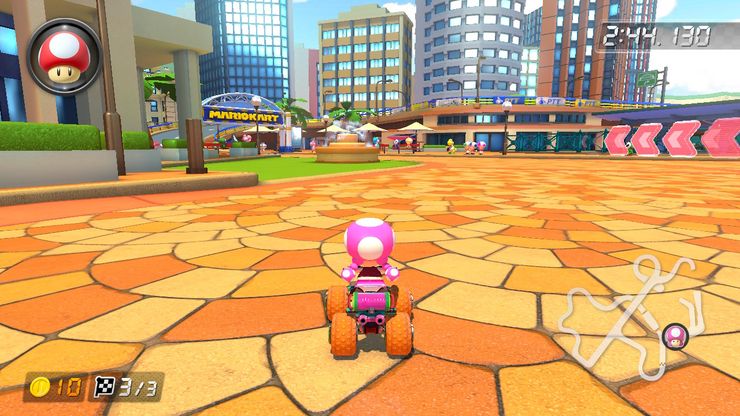 The next skip on Sydney Sprint will only shave a second or two off of your lap time. At the end of the track, you can boost through the gap in between the water fountain and the side of the building, taking you straight to the finish line.

Gap in the Wall 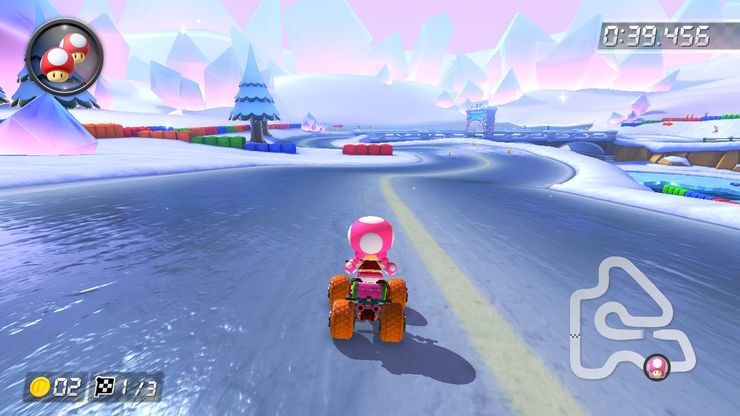 The first shortcut on Snow Land is almost identical to Mario Circuit 3's final shortcut. On the latter half of this track, you will spot another colourful, blocky wall – shown in the image above. Use a boost mushroom item to speed through this gap and avoid the curve. 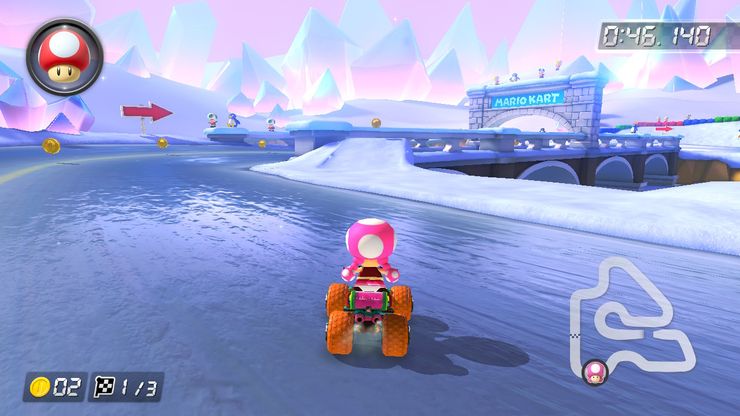 Right At The Start 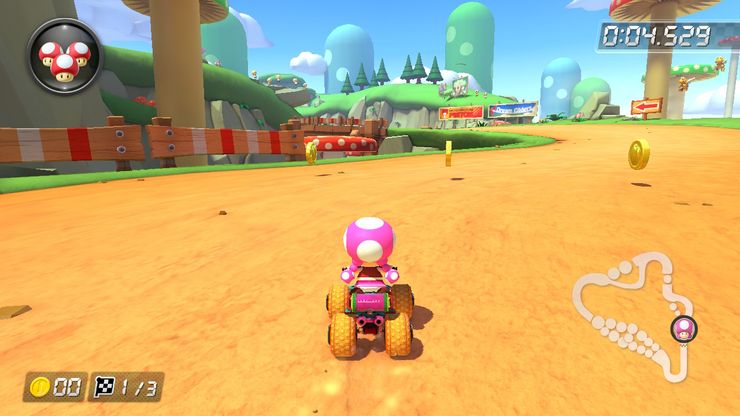 Once you pass the checkpoint at the beginning of a new lap, use a mushroom to boost yourself off the side of the track on the left. You won't be able to see it until you fall, but there's a bouncy mushroom underneath that'll take you to the next mushroom, before dropping you off on the track again.

Drive toward the bouncy mushroom, and you should be able to make this shortcut. You do need a decent amount of speed to reach the mushroom below, so make sure you either have a mushroom item to boost you, or you can get enough speed if you're coming out of a drift on 150CC or 200CC. 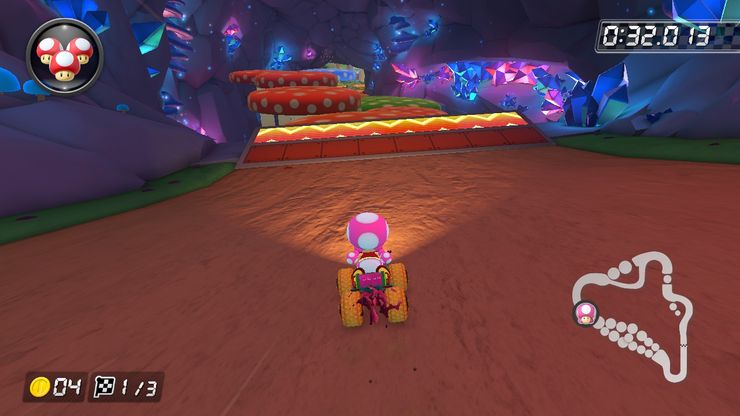 The fastest way through the cavern is to take the left path and boost off of every bouncy mushroom – you can do this by tapping the drift button the minute you leave the ground. You want to aim for the big blue mushroom at the end, which will open your glider and let you fly.

Before The Last Turn 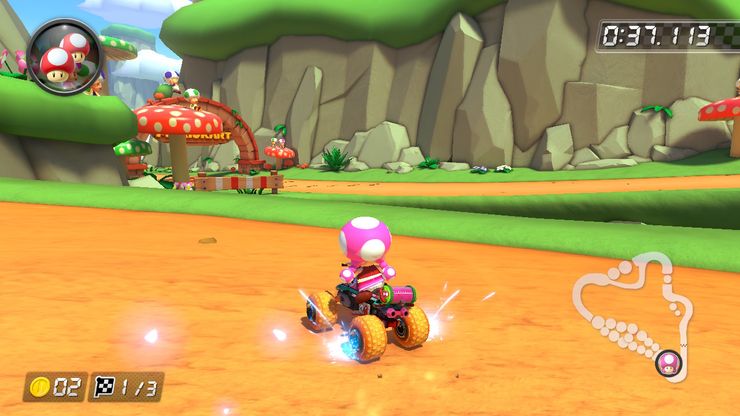 The last shortcut on Mushroom Gorge is one of the trickiest jumps in Wave 2. At the end of a lap, after the cavern, you'll need to make a tight turn to reach the finish. But you can skip the entire drift by boosting through the gap. This trick is slightly easier on 200CC, where speeds are the highest, but it's still possible on 150CC.

Use a boost mushroom and tap the drift button to jump through the gap. Try to drift upon landing, so you don't simply hit the wall and get stuck. Even if you fall through the gap, Lakitu will take you closer to the finish line, so you won't lose too much time – though it's not ideal for speedrunners.

At The Top Of The Stairs 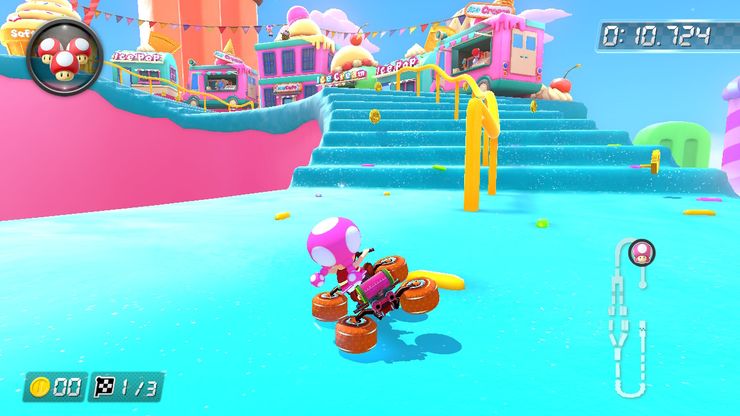 You have one path to follow and that's pretty much it. However, what you may miss are the secret boosters. After using your glider at the start, you'll land at the top of a set of stairs. Drive through the yellow handles to gain multiple gravity boosts through this whole curve. Combine this with a long drift, and you'll power right through this section of the track.